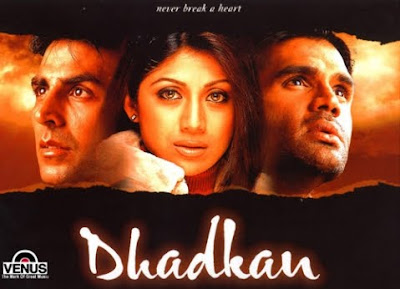 Dev's mother (Sharmila tagore) urges Anjali to promise her she would stick by him forever as he's known as illegitimate by society, Anjali promises her

Anjali tells her parents of her lover Dev, when he comes to meet them he doesn't even bother to make an effort plus he fails to make a good impression on her parents as he starts acting arrogantly

Anjali's father is disgusted and feels disgraced by her bringing home such a lowly guy, he arranges for her to be married to wealthy Ram (Akshay Kumar)

Dev is devastated and if the breakup wasn't bad enough, his mother dies leaving Dev alone in the big bad world

After their marriage Anjali refiuses to have sex with Ram, being the gentleman that he is, he agrees 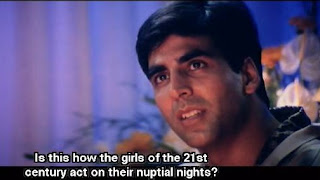 (hell no what's it with this Ram, a night or two is fine but a whole month... hell no..lol)

Things take a turn when Dev now a millionaire comes back into her life, Dev hopes he can still make Anjali marry him

When he notices her love for Ram, Dev is jealous and he starts creating havoc in their lives

Will Anjali and Ram's marriage survive Dev's evil tactics? Will she remain faithful to Ram or will her affections shift towards Dev?

Dhadkhan (heartbeat) irritated the hell out of me, the done to death love triangle plus all the self sacrifices got on my nerves, also added to my annoyance was some Cinderellaesque type storyline with Sushma Seth as the wicked Stepmother Inlaw and Parmeet Sethi and Manjeet Kular as the wicked step sisters. Despite all the annoying things, for some reason i couldn't chuck it out of my Dvd player, i watched it all the way through as such I wouldn't describe it as an entirely awful film, but its not execeptionally good either watch it if you like Shilpa, Akshay & Sunil or if you're in need of some time filling entertainment or better still for the songs, the music of this film is probably one of the reasons it'll still be playing on my Dvd

Decent performances from all the cast but why oh why did Sunil Shetty win Best villain for this film, i've nothing against his acting in this but his role when he comes back to wreak havoc in Ram and Anjali's life can hardly be described as true villain material

Is it a coincidence, or does this sound - at least as far as the basics go - somewhat similar to Humraaz? I remember beginning to see this a few years ago on TV, but then had to give up just as she was warming up to her husband... I had to go out somewhere, so Dhadkan got left midway. Looks like I didn't miss much. Will check out the songs on youtube, though!

Like Dustedoff, I too left off at the point where Anjali falls for her hubby and Dev returns. It seemed kind of nice till that point, but the whole Dev+revenge/obsession thing just didnt seem interesting enough. Didnt Dev have a girl friend in tow - I seem to rememember Mahima Choudhry but not sure.

@ dusted off you sure didn't miss much, the only similarity it perhaps has with Humraaz is that both women refuse their husbands sex after marriage apart from that Humraaaz is way more entertaining than this

@ bollyviewer yes he did indeeed have a friend in tow who was Mahima Choudhry, the Aksar duniya mein song i've linked in the post is picturised on her

I missed this one on the theatre but enjoyed my dvd watch... Akshay Kumar as the "good" guy was a nice change from his whole lot of action thriller films (Khiladi series) and i guess that is what the audiences warmed up to despite the story being all-too-familiar...
after baazigar, this was one film she got a lot of appreciation for.. it was a high point in her career...

after baazigar, this was one film SHILPA SHETTY* got a lot of appreciation for.. it was a high point in her career...

@ Mansi Your comments puts things into perspective for me and i can see why people must have appreciated the film, i have to see more of Shilpa i really like her

I loved this soundtrack, especially Na Na Karte. I wish Shilpa Shetty would come back and do something now. She was great in this role, especially with her interaction with her cruel in-laws.