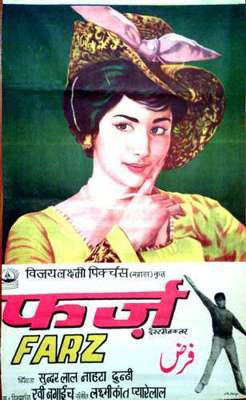 Kicking off the 7 day Jeetendra Extravaganza is Farz (Duty) the first commercially successful spy movie modelled after the James Bond craze of the 60's, today also happens to be his birthday (Happy Birthday Jeetendra). Unlike most James Bond films of the era this bollywood take on the 60's espionage type thrillers much to the annoyance of one reviewer online comes complete with dance numbers, the said reviewer ranted at the fact that there was a song and dance in a spy (Sorry mate, its bollywood what do you expect).That said though, Farz is a cult classic or should i say has a cult following due to its James Bond type theme and its honour of being India's first commercially successful spy thriller. Farz itself is said to be based on the Telugu film Gudachari 116, which imdb describes as the first Bond-era secret agent movie made in India (does anyone know if there were secret agent type Indian films before the Bond-era?)
When Amarnath aka Agent 303 an undercover government spy takes pictures of enemies who are a threat to the India's safety, he's killed by the traitors, unknown to them is the fact that he had handed over the evidence to a photo developer 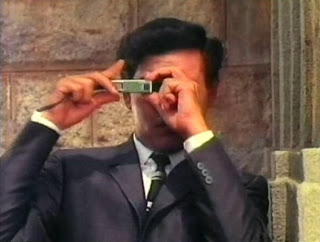 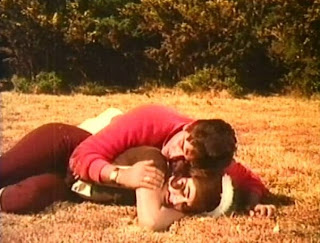 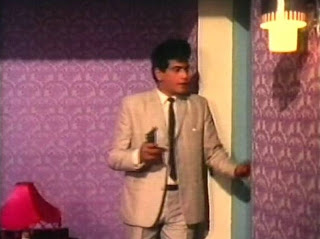 Kamla however is visited before Agent 116 gets there by Damodar (Sajjan) who claims to be her brother's friend, he twists her mind into believing Agent 116 is a villain, who's after the camera for his own gains, he urges her not to lash at at him but should rather join him in a cunning game that would lead Agent 116 to him 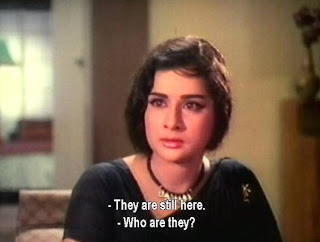 Agent 116 turns up and introduces himself but she's cold towards him due to Damodar's tactics, Agent 116 manages to get the location of the film and develops it, the pictures reveal a car with a plate number which he sees his love interest Sunita (Babita) driving 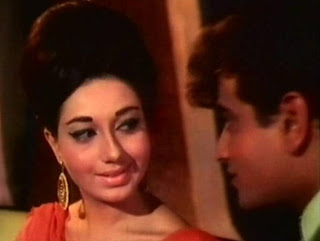 He later finds out Sunita's father Damodar is the owner of the car, Gopal becomes suspicious of him and links him to the traitors who had murdered Agent 303, when Damodar realises Agent 116 is suspicious of him he tries cutting a deal with him by offering Sunita's hand in marriage to him provided he quits his job as a spy, Gopal gives him his own condition too saying he (Damodar) would have to quit his own business too 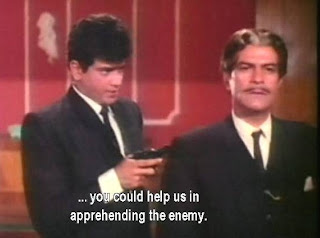 Will they be able to reach a compromise? Will Sunita ever find out about her father's shady deals? Will Kamla ever realise Gopal is indeed innocent?
Added to the mix is a brain squeezing Gadget 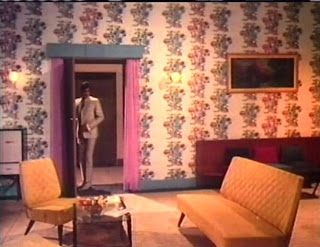 An evil bond style villain with the name Supremo 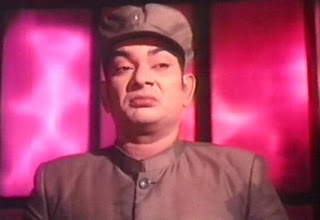 Overall Farz ends up being just a moderately enjoyable camp thriller, it could have been so much entertaining had the director cut down on the excessive dross in the form of tedious comic side plots which weren't too grating but still fell very much out of place. The major highlight for me were the songs and Jeetendra, his Gopal character i found very likable, he might not have had James Bond's suaveness or sex appeal, but he sure had a few smooth lines for the ladies, check out this line which he uses on Sunita
"I do not know what your parents named you but you're a true Mohini (Celestial beauty)' Now thats a chat up line you might want to try guys/gals
I loved his 60's style fashion too, skinny suits and pointy toe boots 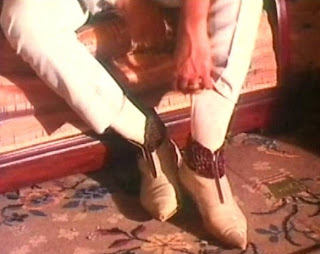 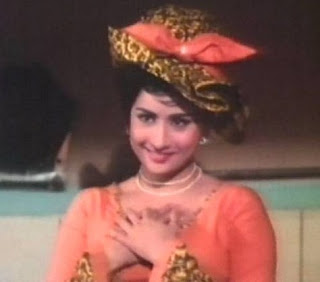 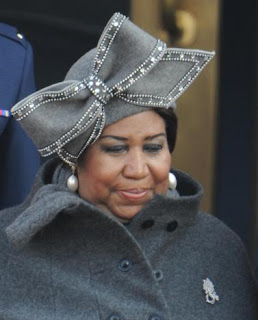 This was the first movie i saw Babita in and i really had to do a double take to ensure i wasn't watching Karisma, the resemblance is striking to say the least 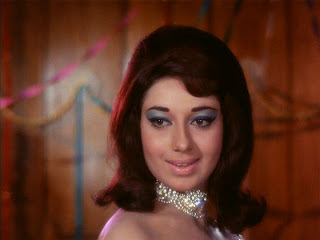 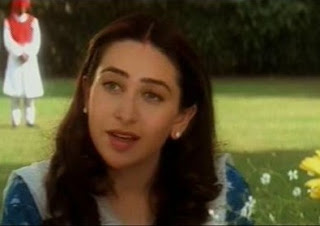 Other points worth noting is the Patriotism Farz exudes, from its name alone which translates as 'Duty' one can invariably conclude Duty to motherland or Duty for nation, a great point Keith at teleport city makes in his extensive write up of the film is below in quotes
"Farz takes its nationalism far more seriously than Bond or any of the Eurospy films would have ever dared. While Europe had entered a phase in which such flag-waving patriotism was considered silly, at best, India was still pretty serious about it. That said, however, Farz is hardly a deadly serious film"
Fabulous music by Laxmikant Pyarelal is what makes this film extremely memorable in the minds of many including me, the catchy 'Dekho Dekhoji sochoji' the fun peppy 'Mast baharon ka', the lovely 'tum se haseena' and the wonderful 'Hum to tere asshiq' some of you might remember it as one of the songs in the antakshri medley from 'Maine Pyar Kiya', and seeing as its Jeetendra's birthday today what better way to celebrate than ending with the the superb 'Bar bar din ayee (Happy Birthday to you)' long live Jeetu-ji
Paisa Vasool Rating: 5.5 /10
Farz is available in 15 parts with English Subtitles on YouTube
Posted by bollywooddeewana at 20:55

I still stand by my last statement: those pointy-toed shoes are just not my cup of tea (I've seen lots of them around here in Delhi too - but I just can't bring myself to like them)!
That said, this film's so quintessential early Jeetendra. Fun, fluff, great music. Enjoyable enough, though with too much extraneous stuff happening that detracts from the main plot.

It will be interesting to note that FARZ would have become KARZ for the producer such was its dismal initial failure at the box-office. Jeetendra was at his wit's end for this movie was to spell his future stakes. So he actually put in his money at the movie-hall to make it run. Probably this went on for 10 weeks or more after which the movie started picking up and went on to become a jubilee hit. Jeetendra had arrived.

Yes, tight trousers were in fashion for men. Of course this was not meant for the slim ones. Looked great during those days and baggy pants were looked down with disdain. Pointed shoes were in vogue. I specially remember the Hamjoli outfit that I had made for myself, which had the same cloth, the same colour pants and shirts. Of course tight pants were also ridiculed by seniors. Remember the Manoj Kumar song Ek Taaraa Bole? "Taange lagtee hain cigarette jaisi..."

Jeetendra looks cute in this and this movie has some lovely songs. If only they had concentrated more on the main plot it would have been such a great movie.
p.s : I love 60's style fashion too - skinny suits and pointy toe boots and I feel he carried them well.
@ Nasir : Humjoli outfit? and that too same cloth and color??? Wow!!!! That's something I am yet to do. I end up liking almost all the attires that it gets really tough to decide which one to make :-)

Lol Dusted off fair enough, at first i actually thought it was really bad but after watching it a second time i enjoyed it a lot more inspite of some of its silliness

@ Thanks for that additional info Nasir, i have no idea of the Manoj Kumar song, what film is it from

@ Sunehri he looked the cutest here and then Jeene ki rah i think. The 60's are one of my fave decades for bollyood fashion and sets, people were very creative & resourceful

The climax of this movie was straight out of Dr. No. I saw Farz first so when I saw a similar scene at the end of Dr No, I was outraged.. these firangis stole a scene right out of our movie, I thought.

James Bond in India! Does Jeetendra take to the sea in a speedo? ;-)

@ Avdi Thanks for that information, i've never seen Dr. No so i wouldn't have noticed

@ Bollyviewer What a sight that would have been, unfortunately or should i say fortunately he doesn't ;0)

Would have loved to see Jeetu in a speedo. He was only 24-25 then. How bad could it have been? Jeetu has been growing on me fast since I saw him in Caravan. As for the Jumpin, I think every newcomer was trying out Shammi Kapoors moves then. Love Jeetus version.

@ Sophy Caravan seems the be the Official Jeetendra approved film, everyone seemed to have loved him in that. Indeed Jeetu would have pulled it off, but I'm not sure he'd look as hot as Sean Connery did in his, probably why he didn't attempt and i love his energetic moves, in fact its one of the things that i find endearing about him

amazing review as never knew d plot till i read it now..if am not mistaken, was anand bakshi's 3rd hit movie post "jab jab phool khile", "devar" n b4 "milan"..songs he wrote n LP's music is a treat even now!!

Thanks The BARD, i'm not sure Anand Bakshi were involved with Farz, it doesn't have them on the imdb credits page according to imdb it was Himalay ki Godmein after Jab jab phool khile then Milan, Rja aur Runk and then JEENE KI RAAH and ohh yes Laxikant pyarelal music is still a treat till now i love 'Tum se haseen' and bar bar din aaye the best