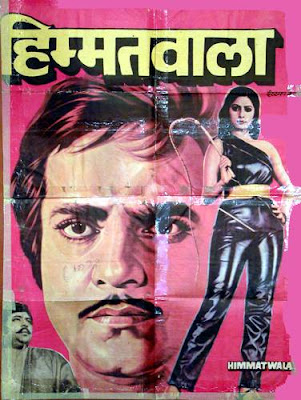 Following the massive flop of Deedar-E-Yaar, this film did magic for Jeetendra's career and catapulted him into the high realms of bankable stars in 80's bollywood. Directed by K.Raghavendra Rao, Himmatwala (Bravery) was a remake of the directors Tollywood film 'Ooriki Monagadu', these southern type melodramas (mostly remakes of southern films) became a winning formula in 80's bollywood with Jeetendra starring in almost every single one of them alongside Sridevi & Jaya Prada, coupled with dialogues written by Kader Khan as well as folky disco type music from Bappi Lahiri. Himmatwala is a typical example of this genre of films that became blockbusters
Ravi (Jeetendra) returns to the village of Ramnagar after completing his Engineering education in the city, he is disheartened when he finds his mother & sister living in dire conditions 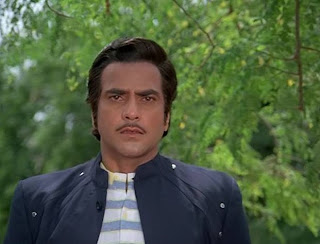 He finds out about his mother Savitri's (Waheeda Rahman) sacrifice to get him educated & learns how his father Dharmamurti (Satyendra Kapoor) had been framed for rape by the village tyrant Sher Singh (Amjad khan), as a result his father was driven out of the village never to be found again, a furious Ravi promises to avenge his father's disgrace and gain back his father's honour by bringing Sher Singh to justice 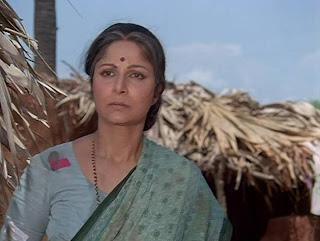 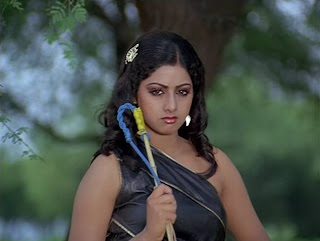 Better don't mess with Rekha or you'll be lashed
Unfortunately for both father & daughter they finally meet their match in the form of Ravi who squares up to them, he's met with admiration and respect by the local villagers who begin looking up to him 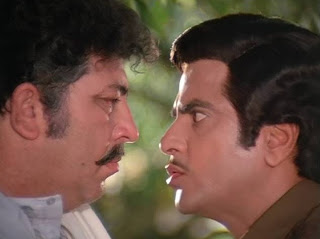 When he's given the contract to build a dam in the village, Sher Singh tries to bribe him into choosing his own plot of land for the project, when Ravi refuses Sher Singh sets out to get him 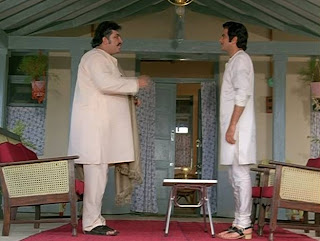 He manages to make Rekha see the error of her ways in a taming of the shrew kind of way, she falls hard for him & joins him in his quest to bring down her father's tyranny 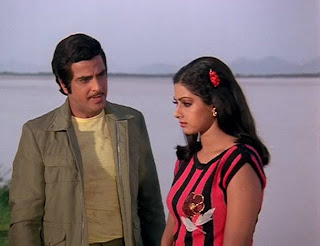 Himmatwala is a silly film with a barely there plot which manages to stretch itself out for 2.5 hours, i'd be lying if i said i didn't enjoy it in spite of its silliness, these southern type films were widely panned by the critics, which didn't stop them becoming massive hits. Himmatwala of the two southern type melodrama's i've seen so far is not overly melodramatic like Tohfa, its charm lies in the charisma of Jeetendra and campness of Sridevi and the supporting cast, i think the rather simple and relate-able surroundings the film appears to have been shot in, as well as its themes on forgiveness and love for humanity coupled with visuals that felt very Indian perhaps made the film a hit amongst audiences
There's a certain Indian aesthetic to this southern type films that i admire, for example the 'Nainon mein sapna' number ranks as one of my all time bollywood song picturisatons, with its Bugsby Berkely style arrangement of props and dancers as well as the use of colours, it just packs so much of a raw Indian aesthetic which i just couldn't help but love. The 'Nainon mein sapna' song is the major reason i bought this film, i refuse to get tired of it, its one of my all time favourite bollywood songs, Why is this so, allow me to recap 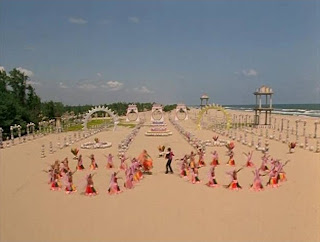 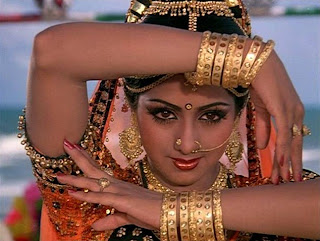 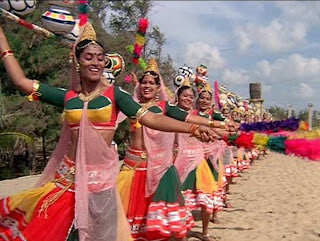 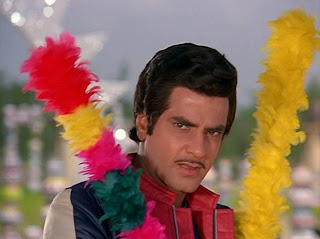 Jeetendra and his colourful dusters 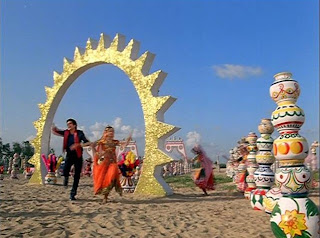 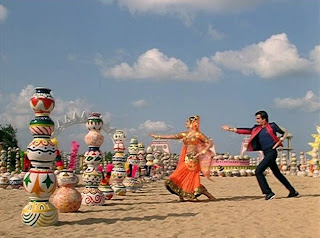 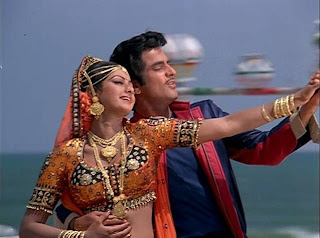 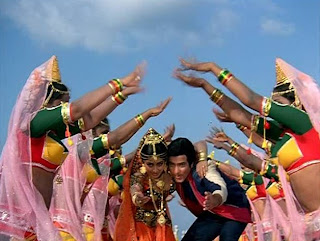 (see the video to this legendary song at the bottom of the post)
Himmatwala took Sridevi's career to new heights, i've read posts on various bollywood forums describing her effect on the filmi world as that of an earthquake hitting a town, upon the release of Himmatwala 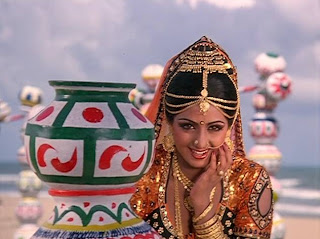 What a long way she has come, i'm amazed that despite being older now, she looks half the size of what she looked like back then. She was curvy in this film, and seems she was given every opportunity to flaunt those curves at us, the cameraman perhaps in a case of perviness or perhaps to make the film more commercially viable gives lots of closeup shots of her thighs and posterior 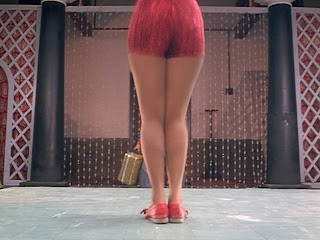 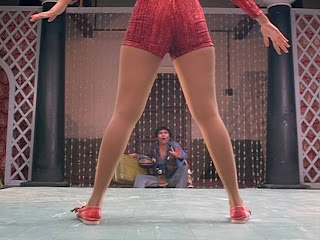 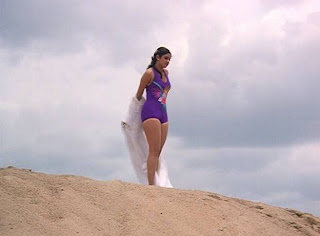 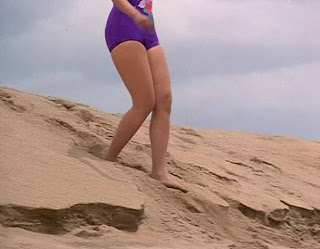 lots of body close ups
The music by Bappi Lahiri is what makes Himmatwala a winner for me and one of the major reasons i shall be re watching it again, there's the fun 'ladki nahin tu' with lyrics such as "You simply aren't a girl, you're a wooden pillar" as well as 'taki o taki' a joy to behold for the perfectly synchronised dance steps of Jeetendra and Sridevi. My favourites include the highly infectious 'Wah wah khelu shuroo ho gaya' for its electro disco sounds
and the wonderful 'Nainon mein sapna' the major reason i bought this film
Paisa Vasool Rating: 6/10 (Extra points for the songs, props & Nainon mein sapna)
Buy the dvd here
Posted by bollywooddeewana at 21:04

With Nineteen Eighties' arrival, my nightmare had begun, mostly because the familiar faces had started disappearing and I could no longer enjoy a movie. The days of VCR's had arrived and out there in the Gulf, we had no entertainment but to see those mediocre movies and lap them up for want of better entertainment, but which hardly registered with me. Of course we had an occasional Qurbani, Arth, Avatar, Asha, Shakti, Mashal, Saransh, Sharabee, Jaane bhi do yaaron, Naam, and the new trendsetters Tezaab and QSQ Tak, etc., that made some sense.

Anyway, the Jeetendra of yore had changed too. No doubt, he minted more money than he did in his youth. The likes of thundering thighs Sreedevi and the new pinup girl Jaya Prada had arrived. Himmatwala was a hit movie no doubt probably owing to Sreedevi's sexual looks. The graceful steps of ordinary steps too seemed to have disappeared. The dances in this movie I would call "Drill Dance" to match Wah Wah Khel Shuru Ho Gaya, or the hit number Naino mein Sapna - as if throwing of legs and jutting out arms constitute a dance! At least I liked the steps in O Meri Chhammakchhallo in Pyaasa Saawan.
O yes, the Kader Khan and Shakti Kapoor duo too made the inroads with all buffoonery at their disposal.

Thanks for the review Bollywooddeewaana.

Loooool Jeetendra and his feather dusters! Highlight of my day!

Oh Dear ! I agree with Nasir. Luckily I was busy raising my daughter and missed the decade in terms of movies.

Still, I remember Nainon me Sapna was all over the Chitrahaar.. sigh !

@ Nasir I can sympathise but i still think some of the80's movies weren't taht bad, you've mentioned some interesting ones which i'm yet to see. The 90's i belive were the worst decade or bolywood and not the 80's

@ Lo Avdi this decade and film seems to be receiving no love, surely i'm not the only one who likes them

I just stumbled across the pots song on youtube - FANTASTIC! I'm glad to find your Jeetendra Love links too - I need to learn more about him.

Indeed Beth i love this song to bits, so camp and colourful. I'd recommend Caravan(that's a must watch for all Jeetendra lovers)from what a lot of people say i'd recommend Khushboo& Parichay(a bollywood take/inspired by the sound of music). Himmatwala can only be stomached by Hardcore Jeetendra lovers like me, or for the songs or if you're a Sridevi lover

I somehow am more fond of the movies from 50's and 60's. I find the black-n-white movies more endearing in terms of everything. There were some nice movies in the later decades as well...but 50's and 60's are my personal favourites.
Having said that, I have always had a special corner for movies with southern flavour - they are so silly and yet so thoroughly entertaining. And may be that was a signal...a signal that I would land up in South India someday :-)
And in the last 11 years I have been here, I have watched these movies in Regional languages here and their remakes in Hindi, it's really very interesting to see more than one version of the same film.
I too like Naino mein sapna , I find it very catchy.

OMG, how terrible is this movie and the entire era that spawned it! And yet!

I loved Nainon Mein Sapna as a kid and had an entire little routine set to it. It was the All the Single Ladies of my day. Lolz.

@ Sunehri I actually don't know what decade i'd say is my favourite i think it'd be the 60's,70's 50's and then 80's. I love this southern films too, no matter how silly the plot there's always something that makes buying the dvd worth it, either in the form of the songs or the style the songs have been picturised

@ Indiequill Thanks for stopping by, Lol at 'Nainon mein sapna' being the single ladies of your day, its such a joyful song and one i never get tired of.I still think the 90's were much worse than the 80's though

Himmatwala's songs especially Nainon mein sapna was the national anthem after the movies release..Bhappi & his songs just took off after this movie on the streets of Mumbai....& Sreedevi arrived in Bollywood with her Thunder thighs...

@ Ramesh its hardly surprising Nainon mein sapna became an anthem, its such a catchy number and i never tire of it as i have said numereous times on this blog

Hello bollywooddeewana... Im in desperate need of help in identifying a Sridevi movie ... I have a photo still, and i remember watching the video on youtube-- she enters the room with a bunch of other dancers and she's holding a knife.. a dagger actually.. and dancing around with it like she's possessed.. its probably a 90s production from what I remember of her dress, the music, and the lighting (very dark scene . in a ballroom or hall maybe?) any ideas?

Hello Dj Carlito could it be Nigahein OR Chaalbaaz, I'm unsure of this song, can you link the photo still or send it to me via email and i might be able to help

This movie is a big hit of its time and made a milestone in Jeetendra's career. Now a remake of Himmatwala is coming acting by Ajay Devgan. Lets see how big hit it will be. Thanks for sharing this post.

I have lost all Himmat to see Himmatwala seeing the reviews

Ravi (Jeetendra) returns to the village of Ramnagar after completing his Engineering education in the city, he is disheartened when he finds his mother & sister living in dire conditions bath towels in bulk , hp 15.6 business backpack black