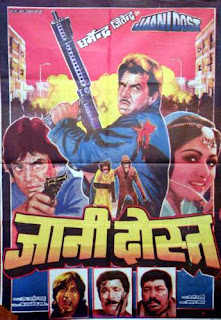 Image Courtesy of The Hotspot Online
Ok i'll admit that what led me to this movie was the fact that it was a box office hit in India, i've an obsession with watching movies that were hits in India. Aside from the movie being a hit, i am a big fan of Dharmendra, Jeetendra & the starcast in this movie, and I was looking forward to a hit masala flick, but i have to say, this movie disappointed me in a crazy way. As much as i am a collector of movies that were box office hits in India, Jaani Dost is one hit movie that won't be going into my collection, hammy editing, an incoherent storyline, and too much silliness makes this a forgetteable and overbearing watch, i was tempted so many times to eject the dvd and post it back but i kept thinking it might get better which didn't happen.Unless you are a die hard fan of any of the actors please avoid this movie, as it'll do your head in, this is a masala gone wrong kind of flick
The movie starts with a Thakur being warned by his assistant that he's about to be murdered, the Thakur on his bid to save his life, escapes with his son, leaving his heavily pregnant wife behind 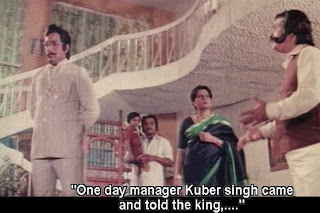 On his journey the Thakur is killed and his son is thrown out of the train. Luckily a passerby sees the boy and takes him home

After a short while the boy starts getting mistreated and is sent out of the house, incidentally an orphaned boy next door gets thrown out as well. The two boys meet and strike a friendship 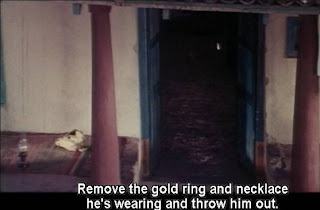 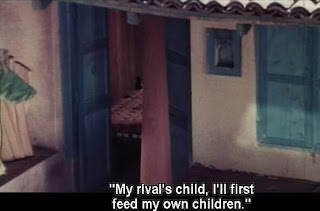 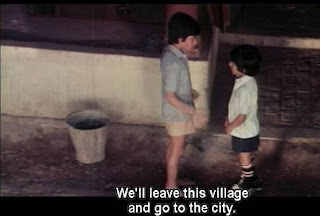 Due to lack of money, the boys decide one of them would go to school while the other will work 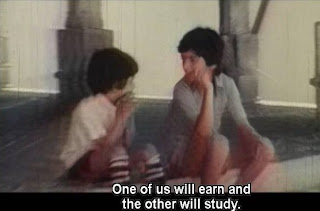 The two boys grow up, and one of them (the uneducated friend) grows up to be Dharmendra, who dries a truck called Sholay (the movie made lots of references to movies and popular actors at the time, some of which were funny and others were dry) 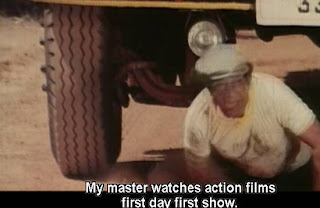 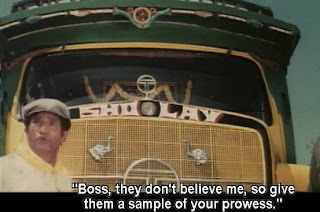 The other brother Jeetendra is introduced as a shady Character working for the villains, to conceal his identity to his illiterate friend (Dharmendra) he tells him he is an Inspector and his post is an ABCD (I lie not, such was the ridiculousness of this movie) 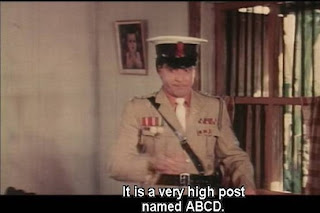 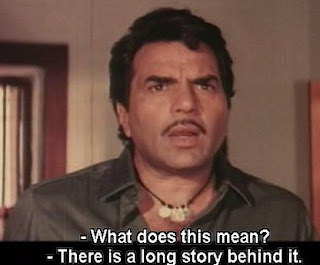 As the movie goes on, Jeetendra is revealed as a real cop who had joined the villains with the intention of exposing them. And i shall stop writing about this crazy movie right now, the rest of the movie is taken over by monkey's kissing, a kung fu fighting Sridevi and bad costumes. 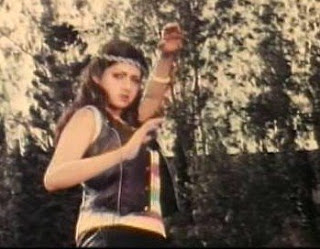 The music of the movie was average and i am going to refer to the music as 'bubblegum filmi' music (silly catchy songs), one includes a Japanese/Chinese sounding pop music with Dhamendra hollering beauty queen at Parveen Babi , another one features a drunk Sridevi & Jeetendra referencing popular movie stars of the time and a catchy disco number by Asha Bhosle & Kishore Kumar . 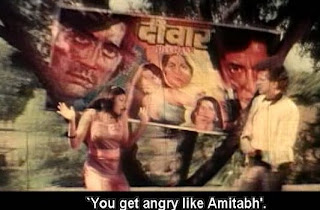 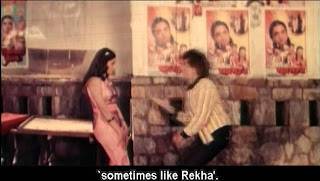 Overall this movie is on the bland, annoying side which should be avoided, unless and i repeat UNLESS you are a die hard fan of any of the actors.
Total Score: 3/10
Posted by bollywooddeewana at 18:24

How could a kung-fu fighting Sridevi be so wasted in a film? Thanks for the warning :)

Thanks for stopping by earlier. I've added your blog on my Bloglist as well. Since we're non-Desis, I love reading Bollywood fans blogs.

By the screen caps, Jaani Dost looks cool. I would only watch it for SriDevi's bad ass kung fu look, lol. ;)

Thanks for stopping by ladies, you're welcome memsaab and thanks for the add Nicki. Even though i am SriDevi fan,she couldn't save Jaani Dost from being a bad movie...Lol

I love Dharmendra, too, but his movies from the 1980s need to be approached with caution. I just finished re-watching one of his better ones from the decade (Alibaba Aur 40 Chor) and loved it - but I generally stay away from 80s movies to be safe! :-)

Thanks for sharing your thoughts bollyviewer. The thing is although some '80's movies have to be approached with caution, i'm an absolute lover of '80's bollywood, as that's where i started from

Whoa! The title "Jaani Dost" sounds uninteresting enough to give this movie a skip. By the way, did you notice that truck with "Sholay" written over it!?

I love Sridevi though :)

I did indeed, and the movie did make various references to movies, i only wanted to see the movie so bad because it was among the top 50 best selling films in the '80's, according to box office india. Thanks for stopping by and for following this blog

I love Dharmendra but this movie looks really bad, so bad that I might not even be able to watch it even for his sake - thanks for the advance warning!

You're so welcome Daddy's girl, such a pity that a whole Dharmendra who did classic movies like Phool aur Patthar, Blackmail, Chup ke Chup ke, was rendered to such roles in the '80's.

Oh no! I can't believe you hated this movie?! It was one of my absolute favorites as a child! I'm going to do a re-watch for Sridevipalooza, I'll let you know if I find it less appealing as an adult. I know that I LOVED the songs, and I remember it being really FUNNY. Wasn't this the movie where Amjad Khan had all the characters? And the sparkly, glittery villain's lair? And I LOVED Sridevi as "Karate Rani Shalu" ... and Dharam was so adorable in this!

It's campy, silly, and full of 80s style cheese and glitter and light-up disco floors. And Sridevi wore so many outfits that I WANTED SO BAD (I was also 6 or 7).

Amaluu surprisingly i did, as much as i love silly campy over the top 80's movies, this one just did not sit right with me, the songs are the only thing that were quite fun 'Jawani jawani' with Silk Smitha and 'beauty queen' with Parveen and indeed this is the film where Amjad kept changing identities, but even that couldn't hold my interest, may be the fact that i saw it on a bad dvd copy didn't even help matters