Happy Birthday to you Poonam Dhillon 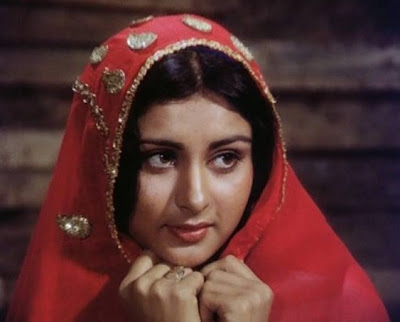 Happy Birthday to dear Poonam Dhillon, one of my favourite bollywood sweethearts. She burst onto the movie scene in 1978 when Yash Chopra cast her in Trishul shortly after she had just won Femina Magazine's Miss Young India. Following Trishul, Poonam appeared in a number of Box office hits such as Noorie, Karma, Sohni Mahiwal etc. But the first Poonam movie i ever watched was Yeh Vaada Raha a sweet love story which i heard flopped in India but that movie was in the same ranks if not even more popular than Sholay when i was a child in Nigeria, something my dear fellow blogger Daddy's Girl has testified to, another dear friend and fellow blogger Nicki has also testified how the movie was such a hit among Thai people. 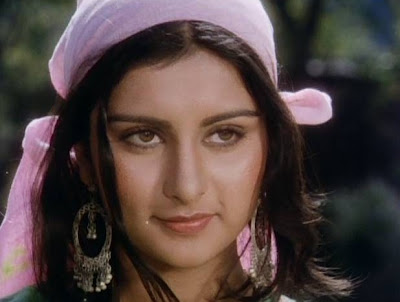 Poonam never won any awards perhaps because she always played the hero's girlfriend and never really got to play strong roles, something i think her cuteness denied her and possibly something to do with her shyness, which she herself admitted to, on her website. However Poonam was always so delightful to watch, her innocent face always brightened up the screen and she always gives a charming performance so much so that in most movies you see her in, you can't help but like her and if it were possible you'd want to give her a hug from the screen. God bless you Poonam and i wish you many more happy years to come. I've included five of my fave Poonam Picturisations to celebrate her 47th birthday

5. Hum Jis Raste pe chale from Teri Kasam (1982) In a movie dominated mostly by Amit Kumar singing for Kumar Gaurav, Lata Mangeshkar joins him in this duet, Poonam looks so adoring and i really like her and Kumar Gaurav together


4. Gapoochi Gapoochie Gum from Trishul (1979) Listen to this song once and you'll be
singing it all day,Poonam looks ravishing as usual


3. Sawan ke din aaye from Teri Meherbaniyan (1985) Every bollywood actress usually
needed a sexy rain song and dance usually with another bollywood actor,
however Poonam sizzles alone
in this one


2. Chori Chori koi aaye from Noorie (1979) Poonam looks like the
embodiment of sweetness and cuteness in this catchy song from the sweet,
simple and sad smash hit film Noorie


1.Yeh vaada Raha from Yeh Vaada Raha (1982) This was the first movie
that i saw Poonam in,
and the rest as they say is History, Asha's voice really suits
Poonam's in this classic song and i like the romantic dance between her
and Rishi
Posted by bollywooddeewana at 18:10

You and I have to bring the 80s to life. I plan that after my South Indian filmfest. :)

PS - thanks for the shout-out

You're welcome Nicki, i'm all for '80's bollywood, pity its very often sidetracked by many

Thats a great tribute to Poonam Dhillon! I love her, too. I think her acting skills were very underrated and she never did get her due. I was re-watching Tawaif a few days ago and she looked soooooo cute there and acted so well too. I love her in Basera as well. Guess it was her extreme cuteness that landed her cute parts and nothing else! And I loooooove the Tu tu hai wahi number from Yeh Vaada Raha - the dance looks so spontaneous and the two of them look so happy!

thanks for sharing that lovely comment bollyviewer glad you found it interesting, i was really moved to write something as she seems to be remembered by many just for her cuteness. I really want to see Tawaif, its directed by B.R Chopra and i'm a big fan of that man, i've asked a friend to get it for me from India

I admit my knowledge of classic Hindi is very very limited, so it's great to be able to be exposed to new things via other's blogs. This post on Poonam was exellent. It makes you wonder if she had debuted amongst today's heroines playing stronger leading lady roles, if she would have received greater recognition.

Great point Shell, i really do wonder as well

I have seen her in just a few films, but this makes me want to see more of her. Belated birthday wishes to Poonam!

I found this site using [url=http://google.com]google.com[/url] And i want to thank you for your work. You have done really very good site. Great work, great site! Thank you!

@ Anonymous Thank you very much for the kind words, its very much appreciated, Lots of love

@ Anonymous Thanks for sharing that story with me, I love it when Readers leave their thoughts and feelings