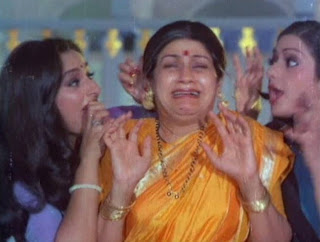 Second film in line for Sridevipalooza is Mawaali (Loafer) this is yet another film where Sridevi didn't get much to do, but these films still helped lay foundations for her status as the No.1 heroine of the '80's she was to become 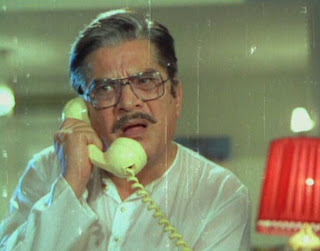 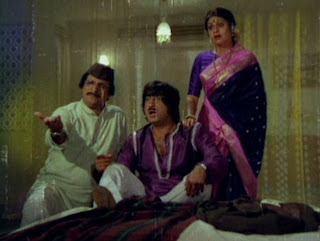 Ajit is one of the trustees of Mr Goyal's business, he carries out dodgy deals but Ramesh (Jeetendra) an honest employee always restores things 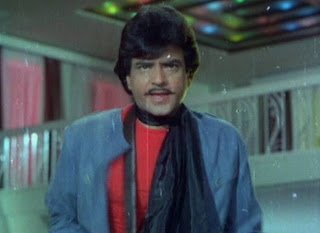 Check out that highly volumised hair
When Ramesh falls for Nisha, Ajit isn't too pleased as he wants his son to marry Nisha & hopefully become heir to Mr Goyal's fortune. When Mr Goyal hears about Nisha's romance with Ramesh , he's none too pleased with the news given his status as a labourer at his factory, as a result Ramesh is fired 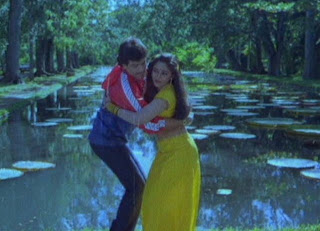 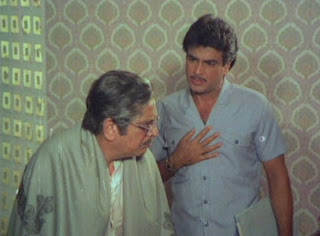 One night while rushing to her father's room following a huge scream let out by her dad, Nisha bumps into who she thinks is Ramesh, he hurries out immediately. Upon arriving at her fathers room Nisha realises he's dead and none other than Ramesh is linked to the crime 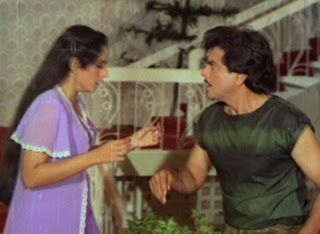 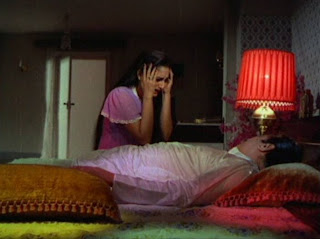 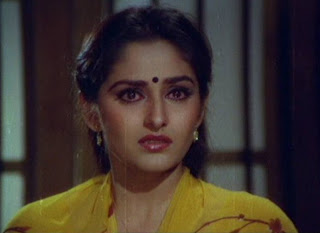 the utterly beautiful Jaya Prada, what a face
In prison Ramesh is surprised when he finds a doppelgänger of himself Gangu 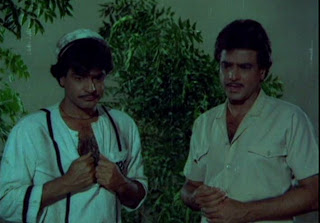 Did Ramesh (or should we assume its Gangu) really kill Mr Goyal? If not who did? What exactly was he doing at Nisha's house at that time of night?
I was tempted to describe this film as camp, but then camp is too kind a word to describe this outrageously wacky film, this film can only be fun if you have a sense of humour to appreciate the outrageous, the editing is bad, the wafer thin plot full of holes bigger than a colander dish manages to stretch itself out till just under 3 hours. 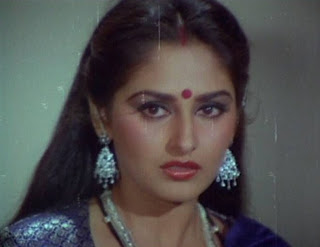 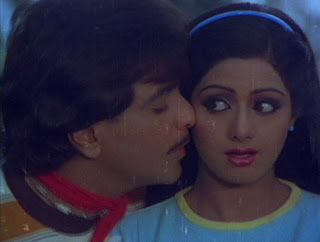 In fact i was wondering whether to bother writing this up or not but i conjured up the courage, it just had to be done, these films whether we like it or not are a part of Hindi film industry, they drew in the crowds and became blockbusters while gems like The Burning train, and many other great films failed miserably. Thus for all the abuse and shtick 80's bollywod gets, seems the audiences were the ones affecting the demand. 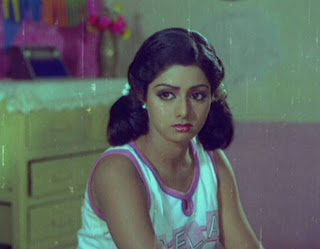 Just like in Justice Chaudhury which i reveiwed yesterday, Sridevi's presence is felt only in the song and dance numbers and in fact that's the only thing i enjoyed about this film, indeed Bappi Lahiri's folky disco type tunes must have been part of the major draw for audiences 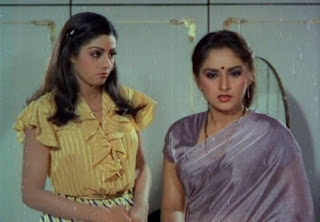 Rumour has it both Jaya & Sridevi couldn't stand each other, there are a couple of stories i've heard especially the one below, which according to imdb goes like this
"Sridevi and Jaya Prada didn't exchange a word during the shooting of the eight or nine films they co-starred in. While shooting "Maqsad", their co-stars Rajesh Khanna and Jeetendra apparently locked the two women up in the same room. An hour later when they peeped in, they saw them sitting quietly in two corners of the room"
Can anyone confirm how true the above might be, i'll really like to know
As usual the music in these southern style films are always hilarious from the fun 'baap ki kasam' & 'rama rama rama re' the hilarious 'Jhopdi mein charli' with lyrics such as 'A cot in a hut is nothing without a man in it' the song i've chosen to embed today is the whacky 'Ek , do, teen, char' i guess this song and the picturization pretty much sums up this movie

and of course the highly catchy 'Ui Amma Ui Amma (Mushkil yeh kya ho gayi)' which has recently been gaining popularity due to the 'Oohh la la tu hai meri fantasy'song from the 'The Dirty Picture' movie sampling it.

Sure enough BD, Jaya Prada used to be a favourite pin-up girl of the Eighties-Ninetees.

As for Mawaali, you have said it all.

Though Jaya is delicious, I'd rather stay away from these films. They are the reason why I totally dislike the Hindi commercial potboilers of the 80s and 90s. But funny post ;)

guess jayprada's acting talents were under utilized in movies like these!!..wonder y she ever did them :O!!

Aargh! I've never seen Mawaali, even though it was shown pretty frequently on TV when I was a teenager. Just the list of songs is enough to put me off! Even the gorgeous Jaya Prada wouldn't be sufficient to make me want to see this...

When I saw the first screencap I thought it was Majaal, starring Jeetu, Jaya, Sri Devi, Prem Chopra. That was tolerable. This sounds real bad!!! Not a movie I would venture seeing ever.

@ Sharmi Glad you at least found it funny, as much as i wanted to avoid writing this up, it just had to be done, its in the history of hindi film blockbusters or crowd drawers shall we say

@ the Bard You're too funny, and indeed such a pity her acting abilities were under utilized in films like these

@ Dusted off Lol at taht aarghh ;0) Surprisingly the songs were the highlights for me

Well, if they really did hate each other, then they were really professional because they acted in a bunch of movies together if I remember correctly.

That story about the two of them sitting quietly in their corners is hilarious! Karisma Kapoor and Raveena Tandon otoh apparently used to attack each other with their wigs.

@ Amrita It is indeed, i can't stop laughing whenever i think of it, Thanks and Lol at that extra bit of Info and indeed if they did hate each other, they're professionals as they did well over 10 movies together

The poster says (in Hindi) Majaal. I love your reviews but was wondering if the wrong poster was inserted. Doesn't really matter but just one of those things that niggle away at me

Thanks for the correction Jawahara, i can't read Hindi and according to the site where i get my posters from it said Mawaali hence why i uploaded it, i'll take it off and replace it, thanks for the tip off