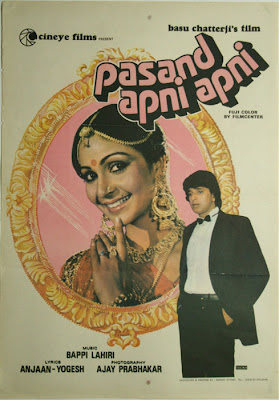 Now that I'm back blogging properly, I'm committed about writing some of my favourite stars whom I've written very little about on here, two of such who are the leads in this enjoyable comedy romance
When Geeta (Rati Agnihotri) a struggling working class girl hitch hikes a ride to work to avoid being late for her drama classes, her boss Sriram (Utpal Dutt) sees it as the perfect opportunity to get funding for his company through Sandeep Anand who owns the car, and whom Geeta claims to know, as a result he promotes Geeta to the leading role 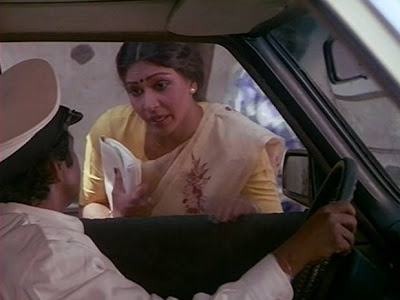 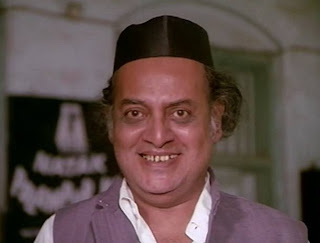 When Sandeep Anand starts receiving bills for clothing which Sriram has been ordering under his name for the cast of his play, he decides on investigating matters which leads him to Sriram-ji and Geeta's press conference where they announce Sandeep Anand as their sponsor, they do all this not knowing Sandeep Anand is amongst the audience 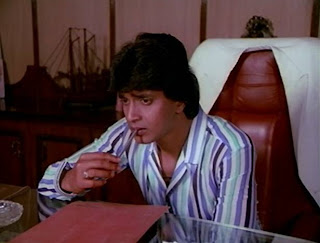 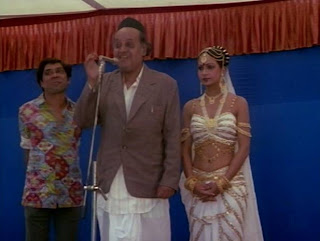 Sandeep goes on disguise and meets Geeta, he claims he's from Sandeep's company and has come to inquire about the clothing bills his boss has been receiving, she's scared and tells him not to tell Sandeep of the bills, he agree's to her plea and they become friends 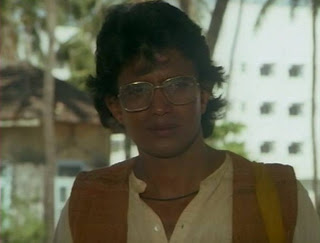 Geeta and this said employee of Sandeep Anand start spending time together and of course its not long till they start falling for each other, but he never reveals his true identity to her. Geeta too falls for him but seems to have a distinct class belief 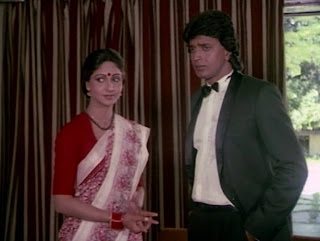 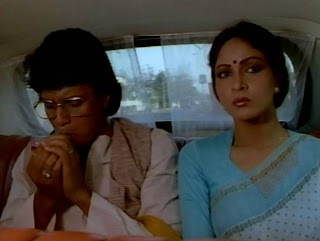 When she's called upon by her boss to arrange a meeting with Sundeep Anand, Geeta realises she would not get away with lying 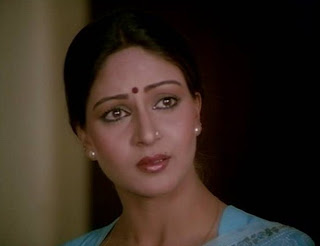 Will Geeta tell the truth? Will she come clean about her lies to Sandeep Anand? Will Sandeep come clean that he is in fact the real Sandeep Anand? Will Geeta forgive him for his lies? For the answers to all these question watch Pasand Apni Apni
Overall a lovely and nicely scripted rom com that sticks to its premise and eliminates unnecessary dross, its not an overtly funny rom com, and although it gets a bit slow in parts, its a good watch, and I'd recommend it for those of you not too keen on 80's bollywood (I love it), this is one of the more restrained movies from that much maligned decade that you might find appealing, the performances as well as Chemistry between the lead pair and Bappi Lahiri's music are good. 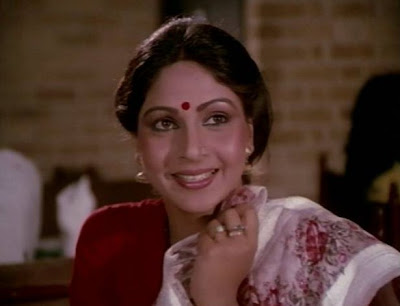 I especially love Rati Agnihotri, there's a certain 'Je ne sais quoi' to her apart from her beauty and gentle manner & charm I love, she's one of my favourite bollywood diva's and I realise I've written very little on her on here, so expect to see more of her in months to come. I wonder what it is about heroines from this decade that makes them not very memorable or easily dismissed by both bollywood fans and critics alike, actresses from this decade (the 80's) are never held up the same way those from other era's (say 50's-70's)are held up. Why is this? (an idea for a future post I think).
And of course Mithun Chakraborty was great as well, this was a good role for him, what a pity he's always remembered for the Cheese factor of films like Disco dancer or Dance Dance, this man is a fine actor

I haven't seen Pasand Apni Apni, but this sounds a lot like the Farooque Sheikh-Surinder Kaur starrer Idhar-Udhar, which was a delightful film. Surinder kaur plays an interior designer who's hired (all through letter/phone) by a wealthy businessman to redesign his home. A similar misunderstanding arises - one day his driver gives her a lift, and she ends up pretending she's romancing her rich client, without realising that the man she's trying to convince IS the man in question.

I'll look out for this one, though - Mithun isn't a favourite, but Rati Agnihotri definitely is!

I haven't seen this fully, have just seen it in bits and pieces on tv. But has been in my must-watch list for a long time. It definitely is among the restrained movies of that ultra-loud period :-)
Poonam Dhillon, Rati Agnihotri and Tina Munim were 3 pretty actresses of the decade. And Rati is my favourite among the three. Tina looked good, as long as she kept her mouth shut. I dont like her dialogue delivery.
Poonam was ok, but there was something very adorable about Rati and she could act as well.

This film has been inspired from Sajan at least in how it commences. Sajan however becomes serious towards the end and turns out to be a fine murder mystery. I've seen this film and quite like it's freeflowing form. And ya, I'm very fond of Mithun. He was so under-exploited as an actor. Watch his Bengali films. They are marvellous and award-winning. And ya, if you do not mind, it's Utpal Dutta, not Utpall Dutt! :)

Dusted off mentioned one film as "IDHAR UDHAR", I think it should be "YAHAN WAHAAN" Am I right?

@Prakashchandra: No, I'm quite certain it was called Idhar Udhar, because I liked it a lot and have tried looking for it - though without success. And some Doordarshan serials did have the same names as films, didn't they? - e.g, Phool Khilein Hain Gulshan-Gulshan or Fauji.

@ Dusted off Thanks for that tip off,it seems a lot of films borrowed this format as Sharmi too states that Sajan starts in a similar way plus Booby of Bobby talks cinema says the plot is inspired from a 50's hollywood movie 'Happy Go lovely'
http://www.bobbysing.com/commentpost.php?postid=postid052411231459 another movie according to Bobby said to be inspired by this same storyline is Ghajini

@ Dusted off Who knows what the name could be for sure but Farooque Sheikh's imdb lists him starring in Yaahan Wahaan with Surinder Kaur, here's the movies imdb page
http://www.imdb.com/title/tt0374343/

@ The Brad No worries ;) its a good watch

@ Sunehri Yaadein I love your observation on those actresses, though in fairness i have no problem with Tina's dialogue delivery but then I'm not a fluent hindi speaker so I guess you're a much better judge that i could be

@ Sharmi Yes Sajan has long been on my to watch list but there seems to be no copy with English subs available, and on Utpal Dutt don't blame me, a lot of Hindi films credit him as Utpal Dutt i admit i included the wrong spelling by adding double ll which i shall go and correct now

Hmm. Okay, maybe I was wrong about that... I should start looking out for Yahan Wahan instead!

But I have clearly remember the posters of YAHAN WAHAN, in theatre of our town.

oh sorry, I have typed my message under ANONYMOUS category, Its me prakashchandra

As Sharmi already pointed out, Pasand Apni Apni has the same story as Saajan, however Saajan later develops into a murder mystery.

@ Dusted off I'll keep an eye out for it too

@ Prakash Chandra Thanks for the update on taht information

@ Shilpi Thanks for bringing Sajan to my attention once more, now I'm simply hungry to see it, please shemaroo/moserbaer/eros/eagle/priya get it out on dvd with English subtitles soon

Saajan - starring Manoj Kumar and Asha Parekh - had a similar story. Rati was a sweetheart and there is definately more to Mithun than meets the eye. He was extremely popular at one time in certain kind of films - lots of bashing up involved - that masked the fact that he is actually a very good actor.

Is it only me, or are there others who notice the similarity between this plot and the romance plot of Ghajini?

@ Rathi You are indeed right, i said the same thing in the comment above, parts of Ghajini is indeed similar to this

@ Avdi i agree with you, I hope I'll be able to find films that display his acting at its best for this blog

well, indeed all the three -sajan.pasand apni apni and ghajini are inspired from the hollywood film happy go lovely[1951]. I commented on the same thing at sharmi's blog also when she did a review of sajan.I have watched all the four and fing happy go lovely and pasan apni apni the best of the lot.

@ Mad Music thanks for re confirming that, looks like I'll hunt happy go lovely down to see why its so popular

Funny thing I stumbled upon this blog while searching for more info on this film!

I just received "Pasand Apni Apni" from Netflix, and am enjoying it now as I type.

It's pretty charming and well made, not at all like the common stereotype of what most '80s Bollywood is perceived as.

By the way, there are many plot devices that are very similar to the film "Ghajini," well barring revenge plot and copious murders and such.

Perhaps "Pasand Apni Apni" is where that "Ghajini" director A.R. Murugadoss got some inspiration! Hmmmm.....

@ Jondotcom Thanks for stopping by and commenting, I still haven't seen Ghajini but indeed you've confirmed the fact that Ghajini made use of the plot line