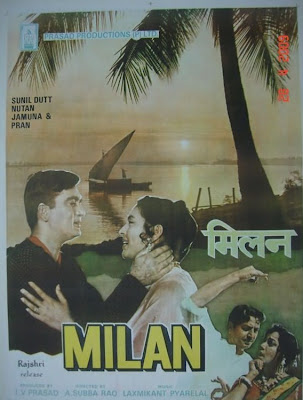 Milan is one of the films I've picked out as part of my Nutan Birthday Special, i saw this film last December but thought it'd be more ideal to review it around the time of her birthday. It won Nutan her last ever filmfare Best Actress gong, she was famous for getting these, till today she holds the record for having won five of the black Lady back then when i guess they were still somewhat credible, Milan (Union) is also the director Adurthi Subba Rao's remake of his 1963 Tollywood reincarnation themed film Mooga Manasulu
While on their way to honeymoon after getting married, Gopinath (Sunil Dutt) & Radha (Nutan) start getting flashbacks/memories of a previous life, they arrive at an old haunted house where an old man who confirms most of his questions Gopi has about a possible previous life 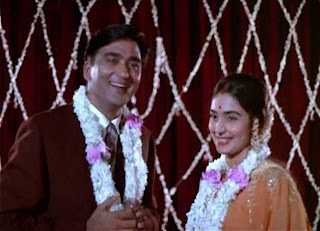 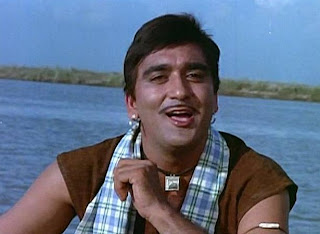 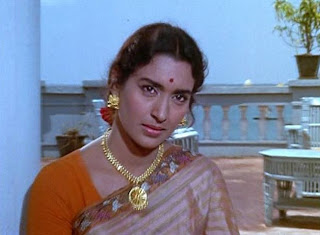 Gopi takes Radha across the river to her college, the two seem to like each other a lot with Gopi bringing/gifting her flowers always, she's taken by his kindness & seems to be very fond of him too 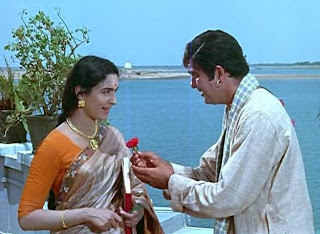 Also smitten by Gopi is Gauri (Jamuna) a local village girl, Gopi however sees her just as a friend 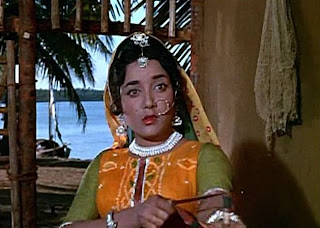 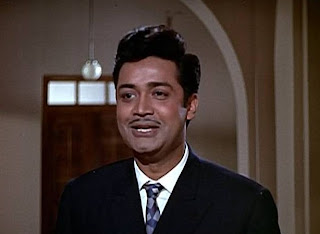 when Rajender (Pran) who is Radha's uncle finds out wealthy Ram Babu is, the fact he can make money out of exploiting Ram's love leads him to pulls strings culminating in Ram & Radha's marriage much to Gopi & Radha's sadness 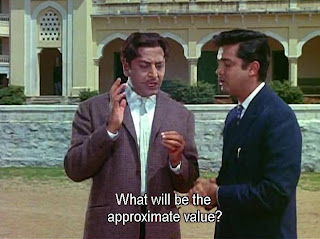 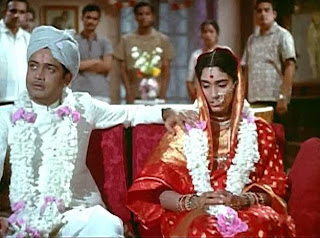 Now we all know as a lead character Gopi has to get the sympathy card somehow, you know according to bollywood both of them have to end up together, as such Ram Babu dies leaving Radha as a widow, as a result she moves back to the village 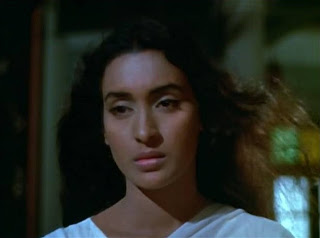 When Gopi hears about Radha's widowhood, he's sympathetic and during his many visits to comfort her for her loss, his visits are treated with suspicious notions by Gauri as well as the fellow villagers due to Rajendra's false stories about both of them 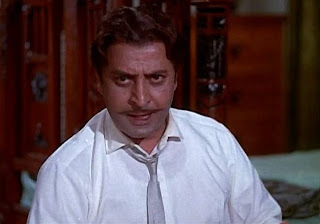 Gopi willing to spare Radha the embarrassment and dishonour decides on leaving the village, Radha follows after him, Rajender on the other hand is after both couples to kill them 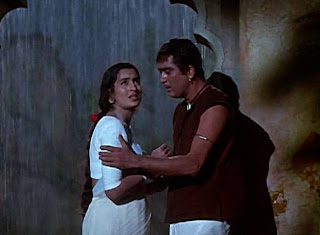 What will be the outcome of Radha and Gopi? Will Rajender succeed in his plan?
Milan is my no means up there with the reincarnation classics like Madhumati (which i'm yet to see) but somehow i just know it isn't, due to all the reviews and cult following Madhumati has. What ticked me off about Milan was that it takes a full 1.5 hours for the plot to settle in, thereby giving the film a slow and quite boring feel, watch it just for the songs if anything. 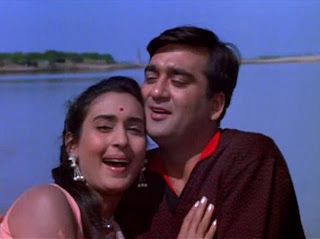 Performance wise Nutan is lovely as Radha but somehow perhaps due to the slow story i just couldn't sympathise with her character as Radha and Sunil Dutt one of my favourute actors was just ok here, i felt he overdid his simpleton act just a bit too much in this, i remember feeling quite irritated by his Gopi character, he's watchable and quite adorable yet still though. I also remember being dissatisfied that Pran was somewhat wasted in this film
Jamuna was likable as Gauri, but like Radha i couldn't really sympathise with her Gauri character, she too was awarded the best supporting actress gong, seems everyone was just winning awards right left and centre for this film
Laxmiaknt Pyarelal too won their second best Music director award for their fab songs in Milan, in fact the songs are what makes this film very memorable for me, from the vibrant 'Bol Gori Bol' the wonderful 'Hum tum yug yug se' the lovely 'tohe sawariya' two wonderful ballads 'main to deewana' & 'Ram kare aise ho jaye' and my utter favourite 'Sawan ka mahina' which some of you might remember as one of the songs featured on the extensive and wonderful Laxmikant Pyarelal medley from Mr India
now lets compare this song and picturization with one from the Telugu original 'Mooga Manasulu', they both look so similar, only difference being the different songs, actors and black and white picture. i would like to see the Telugu version just to see how it compare but telugu classics seem to be so rare to come across on Dvd with English Subs

Posted by bollywooddeewana at 03:48

I'm amazed you haven't seen Madhumati as yet my friend. Again, the problem is with random and wanton editings in the DVD's.

Coming to Milan, I had seen this movie at the Novelty Cinema, the main movie-hall of its release in Mumbai in 1967. I enjoyed the movie thoroughly. It was also a superhit film, winning several filmfare awards. Your observations are perfect regarding some of the drawbacks.

Songs were good. My favourite is SAAWAN KA MAHINA PAWAN KARE SOR....for it is attached with one of the very romantic moments of my life.

A great review my friend.

Not one of my favourite Nutan films at all - I found it irritatingly slow, and as you mention, Sunil Dutt's simpleton act is a little overdone! (Frankly, I don't much care for the other Nutan-Sunil Dutt film I've seen, Khandaan, either).

It is quite possible tha tI saw the movie on DD, but I can't remember it.The songs are fabulous. I quite often listen to them.
Gopi's simpleton act here seems like a precursor to that in Padosan.

I thought I seen Milan but just looking at the title but I haven't. So this is a remake of a Tollywood film? That's interesting!

@ Nasir Thanks for taht nice compliment, i know its such a surprise taht such a bollywood deewana like me hasn't seen Madhumati, i'll do so sometime soon

@ Dustedoff very interesting point about this film and Khandan i've alsways thought they might just be so similar i haven't seen Khandan, but i've always been tempted to do so because of that 'tu meri mandir' song, i might just watch it for that

@ Harvey You know his act in Padosan was quite lovable given the comedic premise of the film, but here it just didn't work as well

I loved the songs but did a lot of fast forwarding with the movie itself (saw it a couple of months ago). Like dustedoff didn't like the simpleton act at all. None of the actors I can think off (except perhaps Raj Kapoor to some extent) have pulled this off effectively. The look and sound like oafs.

I have seen this only in bits and pieces on tv. I have to watch it fully, atleast once. I love all the songs, Saawan ka mahina being my favourite. I saw Khandaan few years ago, just coz of that song, but I didn't like it much.

@ Sophy Well said Sophy,only Raj seemed to be able to pull it off,and Sunil Dutt seemed to pull it off a bit in Padosan, his simpleton act worked there as it was a comedic movie. i can never bring myself to fast forward movies, except if its really painful to watch, i always feel like if i spent money on it, i always have to gain my money's worth back ..Lol

@ Sunehriyaadein Hmm so i'll know i'll just have to watch khandaan for the songs, Milan is just ok, watch it without much expectations and for the awesome songs

I second the Khandaan music. It has that beautiful Lata number "Tumhi mere mandir". The lyrics are a bit much (unless you spin them satisfactorily like I do), but Lata sings it so beautifully. Like Milan, Khandaan is a remake of a Tamil/Telugu movie with Sunil Dutt and Nutan.

And yes, Bhola (Padosan) is adorable. I watch the song "Kehna hai" all the time just to see him cover his face in embarrassment.

@ The Bard that's my favourite moment too :0)

Hi B'wooddeewana,
I had missed out on your two Nutan movie reviews (this one, and Saajan ki saheli), which you did quite well, I see. Only I wonder why you chose two of the later movies, especially in Nutan's career, when they are recognised as less significant than her older ones? Do you agree about this view?
I have trouble with Nutan movies after (say) Saudagar (1973). I've seen Main Tulsi Tere Aangan Ki (1978), and thought it was rather drab, it's as though directors didn't believe in her any more, or something. Even This one (Milan,1967) you seem to say was slow and a little boring.

Yes i know i concentrated on her later films as those were the ones i have available plus usually i tend not to write about films others have(and you've written extensively about her old films and i often use your write ups as a guide on what Nutan films to watch) hence i tend to seek out films no one has blogged about. But i hated main tulsi tere angaan ki as well, it was so drab and definitely not worth a second watch. And on her not getting more interesting roles, the directors probably didn't believe in her any more as Hindi cinema had changed and become more formulaic plus Nutan though she looked great was getting older and didn't have the sexy charms of Zeenat, Parveen Hema or Rekha that directors felt could draw in the crowds

Hey, I like Milan for the very same reasons u have stated... its music and the performance of Nutan. There is only one great reincarnation movie in Hindi cinema and it is Madhumati. All others seem to be poor imitations. Milan is quite ok in that respect. Else all other movies look so shoddily done that you even don't care as to who was reborn as who and why

I could not got my answer.Name of place where it was shooted