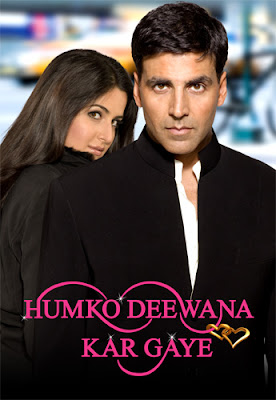 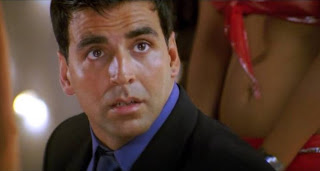 Soon after his engagement he's promoted to Canada and Sonia also leaves for Paris to showcase her fashion designs, the two lovers promise to stay in touch

(bollywooddeewana's note:While in Canada the film never shows him thinking of or even communicating with Sonia which makes me doubt how much they loved each other to even get engaged in the first place)

In Canada he meets and falls in love with another woman Jai (Katrina), who as usual doesn't take to him at first  but later warms up to him

They fall head over heels for each other but Jia doesn't tell Aditya she's engaged and about to be married to strict businessman Karan, Aditya too keeps news of his relationship and engagement with Sonia  away from Jia

How will all these melodramatic matters be resolved, find out when or if you dare watch Humko Deewana Kar Gaye (I'm Crazy about you)

Overall a rather silly & sparsely scripted rom com, watch it if anything for the songs, or if you are a Super Akshay fan like me. I really wanted to like this film more but I  couldn't sympathise with any of the lovers in this triangle and I found myself rooting for no one in particular, which usually is a good sign of a good rom com or love saga. As already noted above we get no real sense of how much Aditya and Sonia really love each other and I totally feel Bipasha was wasted in this, they might as well have broken up before his trip to Canada

As for Katrina's Jia character, I found it rather annoying  that she had no voice of her own, the men in her life (her dad and fiancée) called all the shots and made all the decisions, that said though, I think Katrina was at her dramatic (or should I say melodramatic) best in this 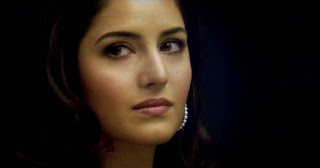 And as for Akshay, I liked  him in this, his enthusiasm in the music numbers plus his good looks made this film a little bearable 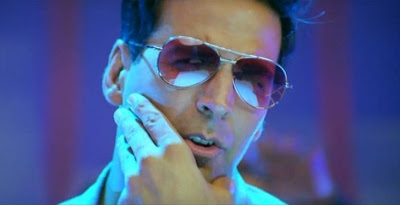 Helen in particular had some hilarious moments, first was this classic dialogue, even Helen couldn't keep a straight face after uttering it, I wonder how the director convinced her to say that. I've captured it for your enjoyment below

How come all three guys


Next up was this faux gay scene, the look on Helen's face is priceless


The music of this film by Anu Malik and Himmesh Reshammiya with lyrics by Sameer made it even more bearable, highlights are the hilarious for your eyes only, the lovely and 90's sounding title track 'Humko Deewana kar gaye' the groovy 'mere nazron mein' (she's a rockstar) and mera saath chalte chalte'. My favourite of the whole lot though is 'Fanaa Fanaa (yeh dil hua fanaa)' simply for Akshay's enthusiasm plus i love the black girls and their funky 'eh to fanaa, eh fan fan fanaa 'dance which I've captured below

HAHA I LOVE this movie! From what I can remember the ending is a bit meh but the rest of it is golden. I love the scene when Akki and Katrina are watching Junglee together :)

Naawww ! I am actually guilty of liking this movie - big fan of akshay :D But agree though that Bipasha was totally wasted !

Never heard of it! When did it release?
I like Akshay too. Well, who doesn't?
I get so bored by such movies. I think I wouldn't have been able to sit through even the first half hour.
but the scene with Helen was hilarious!

re.: rekha pics
BTW, Gold Spot was my fav drink in the 80s in India as well! But we got it when were lucky at the most twice or thrice in a year. And then they featured Jungle Book characters in the bottle caps and if you collected all of them one got a Jungle book comics! And mad as I was I joined the madness! Can't believe it!

@ Ness indeed I thought you's like this, and yeas the Junglee scenes were cute but overall apart from say the songs and Helen's hilarious dialogues I thought it was mostly MEHHH!

@ Scandalous Diva Indeed i think Akshay fans would like it, in fact its one of the reasons i sat through the whole film plus I liked the songs

@ Harvey It was a 2006 release, Helen is indeed hilarious, I still wonder how she said How come three guys want to shit together with a straight face.Ahh on Gold spot the joy of Treats back then, i remember soft drinks was like a luxury back then in our household, nothing to do with cost but more of trying to control our sugar intake. In fact I'm thirsty for some right now though i think I hard they've discontinued it. I remember the whole sticker book thing, I don't remember the Gold spot one but i remember going all out for a drink called Sun Top's promotion, ahh the joys of childhood ;)

Nice write up and I so agree. This is actually one of my all time favorite Akki movies! I love him in the romantic mode. The funny thing is some of it is taken from a Lifetime romance movie that starred Michael Vartan called It Had to Be You, which I also love and so was able to say I know that scene, and that scene and oh that scene too! Should I bow my head in shame? Both are very enjoyable films that I could watch anytime! :)

Not a film I'm dying to see, but Akki is cute in everything he does.

@ limette I would agree with you mostly

I just happened to see this film on tv. When it had released I remember reading that it was similar to Notting Hill, esp few scenes. It was few years later after it released, I heard the title track in the cab on my way home from office and thought it was from some 90's movie. But later realized it was from this flick. I sat through the movie just to see how unbelievable it could get.
I'm not fond of any of the actors, so there was nobody who I wanted to root for in particular.
Helen was the only consolation for me. I'm still surprised when I think back as to how I managed to see the entire movie!