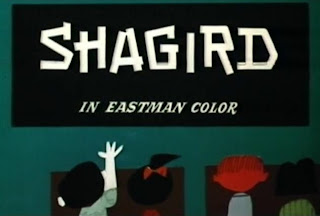 I've been up and about these past few months, that i haven't had enough time as i would like for this blog, now that things are a bit calmer, you my dear readers can look forward to lots of exciting movies. I have about 80+ movies waiting to be reviewed, with such a huge amount of movies to be reviewed, then comes the problem of what order in which to review them. Given that i seem to be on a Laxmikant Pyarelal roll of recent, i thought i'd review Shagird (Student). Shagird is classic 60's bollywood escapist fare at its best, i really can't say a bad word about this film, plus this film really raised by love for Laxmikant Pyarelal who in my opinion are one of the greatest commercial music directors to have ever come out of bollywood, they surely knew how to score catchy numbers guaranteeed to be hits
Ramesh (Joy Mukherjee) is taught by his Professor Brijmohan (I.S. Johar) on the danger of marriage, he makes Ramesh promise never to do so 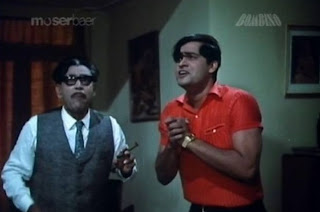 Shefali (Urvashi Dutta) a lovely young lass just happens to be in love with Ramesh, Madan (Madan Puri) promises to help out on her mission to get Ramesh to love her 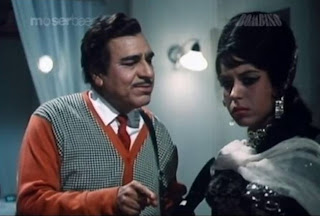 Ramesh's dad fed up of his son's partying lifestyle decides to make a man out of him, he sends him on a work related trip to Madhumati Jungle, there Ramesh meets and falls for a lively (or should i say hyper) village belle called Poonam (Saira Banu) 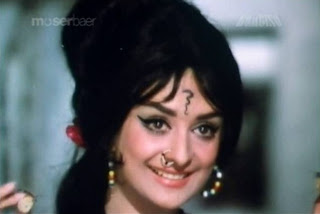 In a strange case of coincidence Poonam's uncle brings her to stay under the guardianship of his friend professor Brijmohan. Such is Poonam feistiness that even a misogynist like Professor Brijmohan falls in love with her 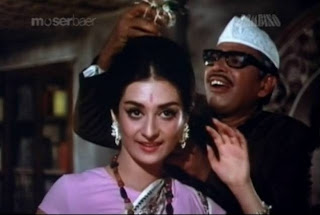 In a desperate bid to woo her, he starts seeking advice from Ramesh who transforms him into a suave character, he however keeps her identity away from him 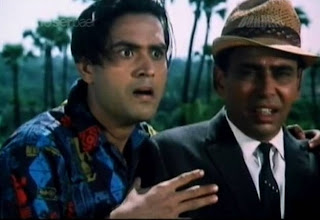 When professor notices Poonam's growing affection towards Ramesh, he gets overprotective over her and starts competing with Ramesh. Poonam wins the affection of Ramesh's parents and its not long before marriage plans are made 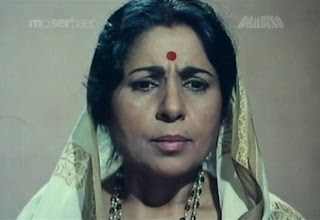 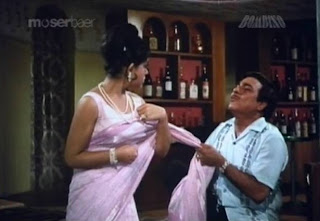 He then gets Ramesh unconscious and frames him in a one night stand with Shefali, Shefali is pleased of course and traps Ramesh claiming he's dishonoured her and as a result he must marry her (well he doesn't have to, but Ramesh is such a gentleman) 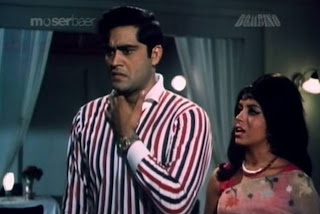 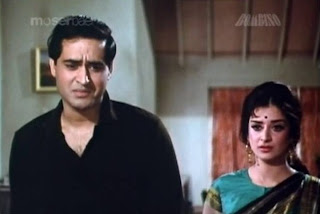 Will the truth ever be revealed? Will Ramesh ever realise he was et up? Who will Poonam end up with Ramesh or Professor Brijmohan?

As i've said at the begining of this post Shagird is a total entertainer and i really cannot say a bad word about this film, it does what it says on the tin. Shagird brings together comedy, romance, drama and bits of action together really well, all without being too masalaic (not like that's a bad thing)

Performance wise everyone is on fine form here but Joy Mukherjee really left an impression on me in this film, i just loved his energy in this film, i found him very Shammiesque in this 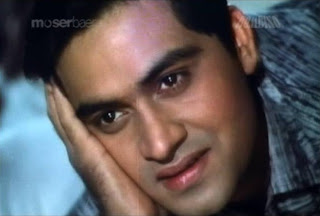 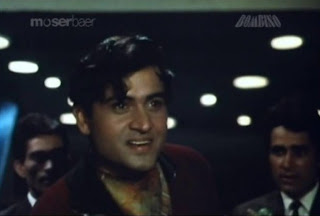 Now for my dear Saira Banu, i love her like i love my desserts, though i had to stop and wonder how many cans of coke she must have drankaa while making this film , she was soooo hyper in an annoying but yet fabulous way, i really can't hate on her, she's one of my favourite bollywood divas 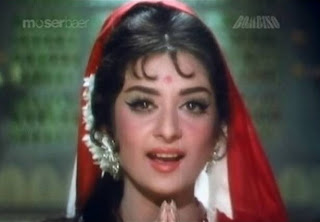 I also loved Urvashi Dutta who played Shefali, i love her face, according to imdb Shagird was the only movie she starred in, I wonder why that is though, she was very sweet 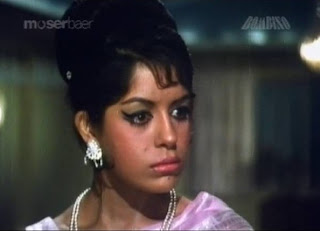 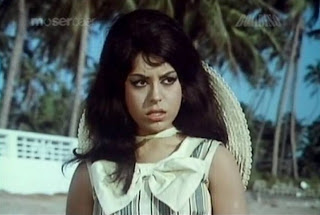 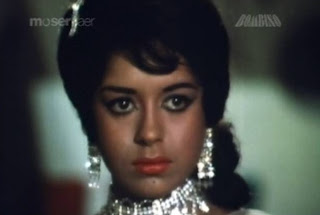 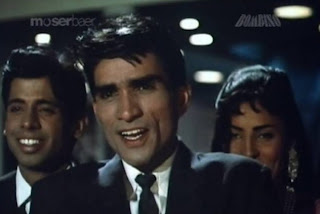 Finally the wonderful music by Laxmikant Pyarelal makes it a movie that won't/shouldn't be forgotten, from the infecti
ously catchy 'Dil vil pyar vyar' to the romantic and flirtatious 'Woh hai zara khafa khafa' the fun 'bade miya deewane' and a beautiful Lata number 'Ruk jaa aye hawa' and my favourite the superb 'Duniya pagal hai' watch it and be rest assured you'll be dancing and singing along in no time

One of my favourite films. :-) I love everything about it, even Saira Banu (I'm sorry, but I find her very screechy most of the time - but here, even her screechiness fits with the character she plays)! And the music is awesome. I've actually listed Duniya Paagal Hai as among my favourite songs in two lists - party songs and Rafi songs.

Hi,
You have a nice blog here. I'm a great fan of old films and write a blog on that also. If you liker you can visit it and let me know what you think. Here's the link:
www.oldfilmsgoingthreadbare.blogspot.com
Shagird is quite enjoyable. And yes, Mukherjee often was like Shammi in terms of energy. Saira Banu looks like a doll (but is a bit too squealish).
I really liked IS Johar. He was soo funny as the protective professor.
And the best part about the film are the songs. They are soo simply superb. Nice post :) I'm a fan now and will go on and add your blog on my blogroll :)

Oooo I have to see this now, because I loooved the general rockabilly dancing in the "Duniya Pagal Hai" song which just certifies why i need to see it! I've always like Joy Mukherjee, he wasn't as persistent as Shammi but he definitely had Shammi's energy and joi de vivre!

Like dustedoff, this is one of my favourite films. I love everything about it, even Saira Banu (whom I am not very fond of. She's very pretty, no doubt abt that but she's usually so loud and screechy). But here, that screechiness blended with her innocence makes her character appealing and cute. Songs are great - love each one of them! Joy and IS Johar are outstanding. And I'll never forget that scene where Joy tells Saira about his mother and she asks him - Tumhari maa hai? Woh mujhe pyaar karengi? (love her innocence and Joy's expression).

Shagird was a box-office hit. It went on to celebratge the Golden Jubilee at the main movie-hall at Mumbai - Maratha Mandir. This picture has a class. This distinction can be compared with a latter movie that was made some two decades later.

Probably this is the best movie of Saira Banu and Joy Mukherjee. She looks beautiful here as she had by then been married to Dilip Kumar. DIL VIL PYAAR VYAAR amply delineates her feisty and nimble-footed filmy character and the rustic simplicity. Joy Mukherjee looks loveable too, backed as he is with the best of songs of Mohammed Rafi Sahaab. DUNIYA PAAGAL HAI and BADE MIYAN DEEWAANE and VOH HAIN KHAFAA KHAFFA are simply unforgettable. BD, his "Shammiesque" style should not be a surprise because he used to be actually coached by Shammi Kapoor in some of his earlier films. I.S. Johar too puts life in the role and those who are not aware of him may find him awkward in his movies. But he is a witty guy and the Filmfare Magazine sold like hot cakes especially for the way he used to answer the readers. I liked him a lot in JOHNY MERA NAAM.

All in all, an excellent review by Bollywooddeewaana.

BD, although not a fan of Joy M, I love the movie and the songs.

Uncannily, I only recently purchased the record. I'll post it up soon.

This is a very nice movie and i like oldies very much.

@ Sharmi Thanks, i've just signed on to your blog as well, yes indeed I.S johar was fab in this, i loved his character and sympathised with his frustration on not being able to land Poonam

@ Rum You're so right about the Duniya Pagal Hai song Bolly rockabilly is what it is indeed, Joy is definitely one i need to see more of

@ Sunehriyaadein Wow seems this film is on the same level with a lot of people, i really can't recall that scene but i'll definitely look out for it next time i'm watching

@ Nasir Thanks a lot for that additional info guess it makes sense on why he was Shammiesque, i'm yet to see Joy and Saira yet again in Aao pyar karen

@ Veen looking forward to tour album posts, this is one of my fave 60's soundtracks, i'll be first in line to download ;0)

@ Weight Loss Tips thanks for stopping by, look forward to more golden oldies on this blog

I have lots of movies too, pending to watch :)

I give you major props for reviewing all these oldies while I am heading down south instead :)

Songs were so divine here. I love this movie, its fun fun fun. Saira looks like an energiser bunny. Joy was handsome. ISJohar was funny. I can watch this movie anytime.

If I am not mistaken Urvashi Dutta played extra roles in other 70s film, but I'm not so sure. At times she looks familiar at times not!

@ Nicki Same here, i have lots of movies to watch despite not buying any dvds this year

@ Avdi Yup i agree with you,i should have written more on Is Joahr in the post

@ harvey Indded the songs are what take this film to another level altogether, I'm not sure about Urvashi you know, her face does indeed look familiar but according to imdb, Shagird was her only movie

Nice review - don't remember seeing this one or it's been too long. Regardless, where are you getting such old films from ? Netflix ?

Thanks Amodini, i buty some from the internet and rent some via someting similar to netflix here in the Uk. As far as buying classics go, induna.com is the best place to shop

Khusboo magazine is a surat based women Fashion Magazine website which provides information about fashion tips and ladies Indian garments. This website is basically fashion and modeling website.