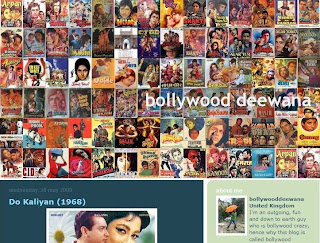 As one might be able to tell from my header, i love vintage bollywood posters, apart from some of them being my favourite movies, what really impresses me about these posters are the artistry and creativity most of them exude, Most of these posters way back then were mostly hand painted and often featured themes of Pop Art, comic book art and oil paintings. Below are some of my favourites 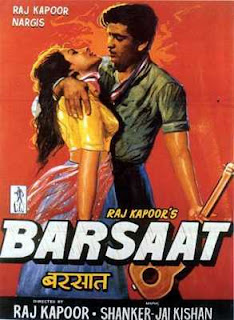 Barsaat (1949) i love this one, i love the way Raj Kapoor is clenching onto nargis and also holding onto the Violin on his other hand, its reminds me a lot of old hollywood. 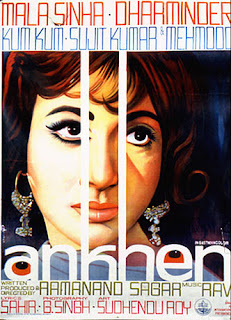 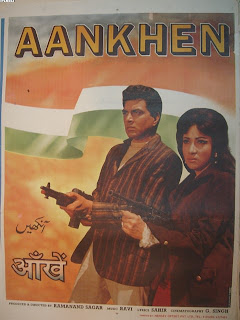 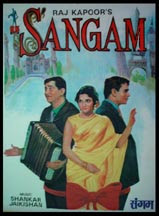 Sangam (1964) in this classic love triangle tale, i love the way the red ribbon ties up the three leads caught up in the love triangle 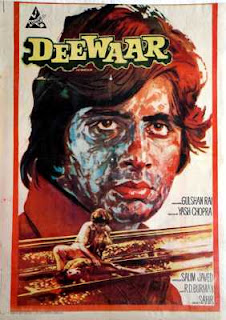 Deewar (1975) I love the grit on Amitabhs face in this one, which perhaps represents his suffering & struggles in the movie 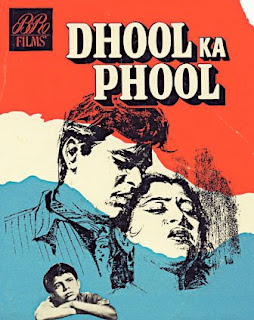 Dhool ka Phool ( 1959) I love the use of colour in this poster of Yash Chopra's directorial debut, i love the blue and red wave over the white background 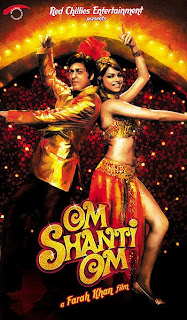 Om Shanti Om (2007) Much like the film itself, this poster seems to have taken its inspiration from the posters of the yesteryear movies. I love the font & colour the 'Om Shanti Om' title is written in 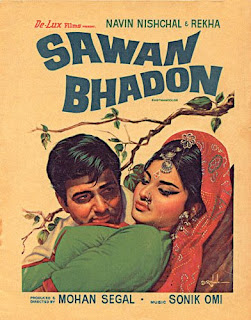 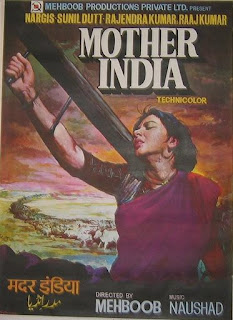 Mother India (1957) Her Strength, her toil, her struggles this poster captures Nargis's emotions from the movie perfectly 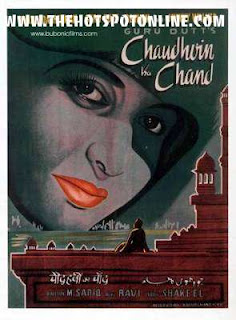 Chaudvin ka Chand (1960) I love the noir art/comic book art of this poster i love the black & white face with red lips, very creative, it kind of reminds me of the way the hollywood film Sin City was shot 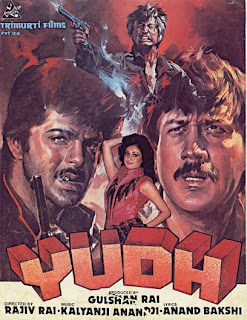 Yudh (1985) i adore the masaliciousness of this poster, from Anil Kapoor smoking that super hot cigarette ( i'm not encouraging smoking, it just looks hot in this poster) to Danny's excruciating face of pain, this movie looks promising, i have to see it soon. 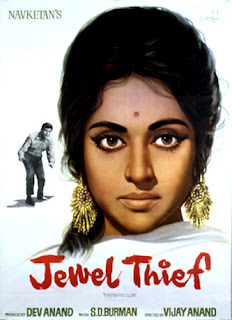 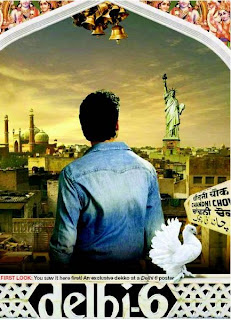 Delhi 6 (2009) I love the way Abhishek's back is on display amidst the backdrop of New York and Delhi, i also love the pigeon on the cool white interwoven picket type fence 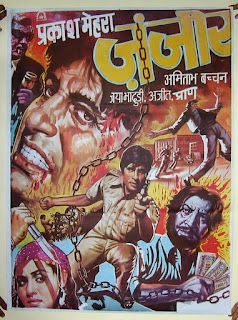 Zanjeer (1973) I love the masala elements of this poster, in fact most masala movie posters have the same effects, a huge angry face of the lead actor, some explosions in the background, guns, villains etc 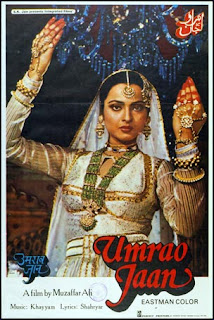 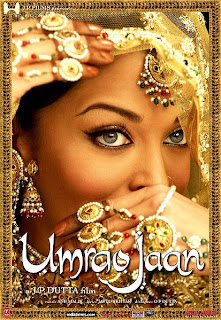 Umrao Jaan ( 1981 & 2006) I love the extravagance of both posters, the jewellery and the beautiful faces of the female leads 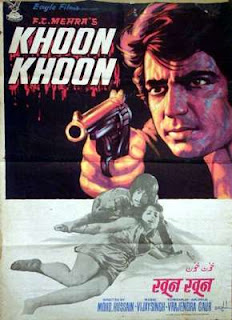 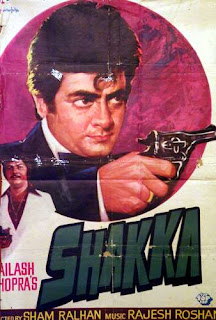 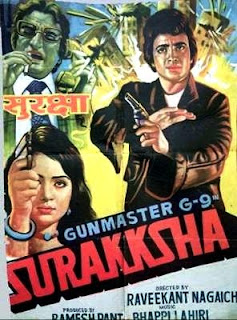 The James Bond influenced posters with men in suits pointing a gun like in Khoon Khoon, Shakka & Surakksha 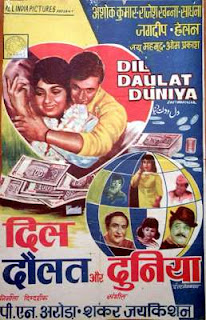 Although not my favourite of the bunch, the poster of Dil, Daulat, Duniya (1972) amuses me the poster was literally a translation of the movie as you can see Dil (Heart/love), Daulat ( Wealth) Duniya (World)

Here are some great places for bollywood posters, Bollywood Originals, Praful, Karen, Wikipedia (When you search for most movies) and possibly the greatest has to be The hotspot online which has extensive range of posters from the 50's way up to the early '90's, also this seller at ebay has a nice selection as well as kannada.com. There are some lovely books about bollywood posters too like Bollywood posters by Jerry Pinto & Sheena Sippy (published by Thames & Hudson) and The Art of Bollywood by Rajesh Devraj & Edo Bouman (published by Taschen), in fact you can get a preview of the book over at their website here

Oh and if you happen to be in Delhi, India you can get a personally made hand painted retro style bollywood poster of yourself. Here's one i found (see below) at the Our Delhi Struggle blog. You can contact the guy who makes them at ranjeet_2870@rediffmail.com 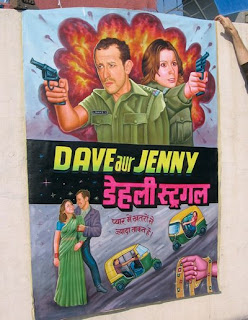 Image coutesy of Ourdelhistruggle blog from their post 'Dave and Jenny Bollywood Style'
Posted by bollywooddeewana at 02:50

Awesome post. And yes, thanks for the links. I think i shud start collecting posters ;-)

Thanks for showing our poster! - Dave & Jenny

Brilliant vintage posters! Love all of them :)

I was in Chapters yesterday looking for a gift and decided to see if they had any Bolly-inspired books. I found one: a movie poster book. However, it was cellophane wrapped with nothing on the front or back cover indicating what was inside, nor the price. I imagine it probably housed posters similar to the ones you've posted, but would have been nice to check it out. Some very nice ones indeed.

@ Dave and jenny You're welcome Thanks for allowing me to share

@ Shell Thanks, i would love to have a book like that, this posters are now collectors items and sell for quite a high price, at least if one can't buy the real thing, you can have it in print

Cool! Thanks for posting yaar! :)
All the best!
Sita-ji

Beautiful post, fabulous posters. I love them all... this has definitely made me want to see more posters....

Bahut bahut shukriya Daddy's girl glad you liked the selection, i absolutely love these posters, wish i had one of them but they're fast becoming collector's items which makes them more expensive to get nowadays

Wah, absolutely wonderful. Thanks for sharing :)

@ Juzé Thanks, glad you liked it

@ Ibirá Machado You're welcome, glad you liked the selection

How to seduce a woman said...

I have been visiting various blogs for my research work. I have found your blog to be quite useful. Keep updating your blog with valuable information... Regards

Chief, do you have access to a sholay poster. I am looking for one to blow up and hand on the walls of my home theatre room!

I have a framed original 1968 poster of Do Kaliyan. DO you know of anyone who would be interested in buying it?

Hello there! This is Meghna. Nice blog you have there! Keep coming with more. Thought you might also be interested in this discussion that’s happening on SpiritzandMore! “Folks does Vidya Balan make a sexy Silk Smitha???” Give your views at http://www.spiritzandmore.com/my-spiritz/forum/8-fashion/113-follks-does-vidya-balan-make-a-sexy-silk-smitha#133

@ Anonymous tRy looking on ebay there are a few on there
@ Anonymous No idea but should they come across here, they would see your email and then enquire from you

Thanks for your kind words Obscurity speaks, I'll head down now

MUST HAVE THE ZANJEER ONE!

Hi - Just came across this blog, and thought you might like some of the posters included in this collection, like the original artwork for Khoon Khoon - https://www.saffronart.com/TheStory/collection.aspx?eid=3560

Thanks for sharing. Innovation, Art Deco, Art Nouveau and Symbolism are cases of period workmanship. Publications additionally come is different sizes, plans and topic. There are additionally a wide range of kinds of publications, for example, western sort notices, vintage film notices, military blurbs, commercials and political notices. The rundown continues forever however pick what intrigues you the most and appreciate what you are doing.
retro cushion covers

WOW! Great Article you can also Find Some Relevant. Quotes On Love

thanks for sharing amazing and interesting information vodafone customer care

your article is amazing. you really work hard in this. thanks. vodafone customer care number

Keep it up nice work and nice your writing skill.status on love

nice article i love to read it you work awesome keep it up. dard shayari love

hey, i like your article specially your writing style keep it up i read your your all work.love status in hindi for girlfriend

|| Thank you for all the hard work you put into it. It's really shows. i read you all post i love to read your post and you work well. love status in english

Thank you for providing such a great information.
Love Status in Hindi

Thank you for all the hard work you put into it. It's really shows. i read you all post i love to read your post and you work well.
telegram movie group link
best telegram groups
whatsapp groups names