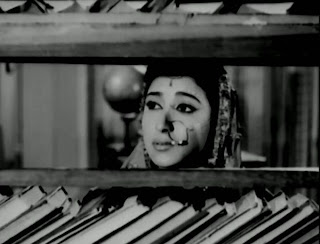 Anpadh (Illiterate) is one of Mala's more popular films, the songs by Madan Mohan are great and the evergreen Lata Mangeshkar number 'Aap Ki Nazaron ne' is from this film
Choudhury Shambunath is a very wealthy man who puts way too much importance on his wealth, he has a younger sister Lajoo (A young Aruna Irani) whom he dotes on endlessly, as a result Lajoo becomes incredibly spoilt 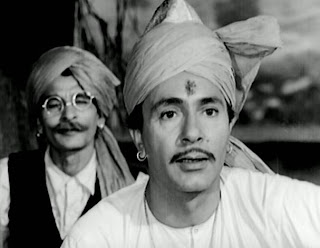 when her school teacher tells her off for her very arrogant ways, her brother scolds the teacher and then stops her from attending school. Gangaram their servant tries advocating on the importance of education arguing no one will want to marry an illiterate girl, Choudhury however is convinced his wealth will get Lajoo a boy 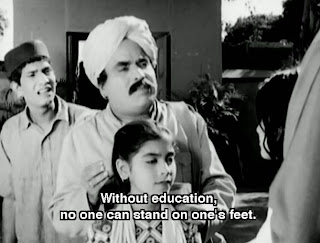 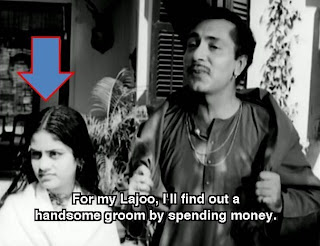 Thus Lajoo (Mala Sinha) grows up uneducated, Choudhury then arranges for her marriage to a well educated Deepak (Dharmendra) through his parents 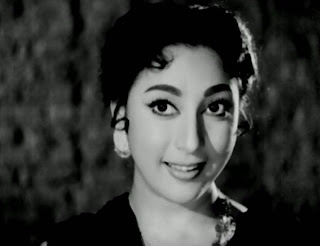 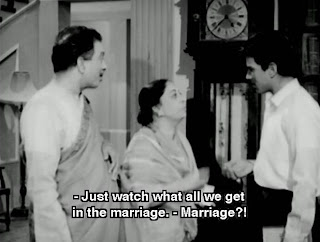 Deepak is annoyed that his parents disn't ask his consent or wait for him to finish his education, he however gives in to their wishes and agrees to marry Lajoo 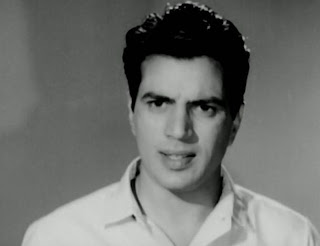 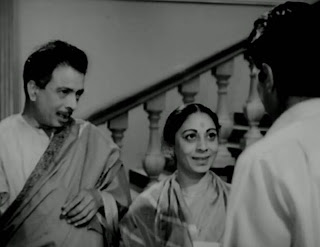 After their marriage when Deepak asks Lajoo to recite a written poem Lajoo tells him she can't read or write, Deepak is furious at the revelation she's illiterate and vents off to his parents,his parents are surprised Lajoo is an illiterate too and she starts getting the cold treatment 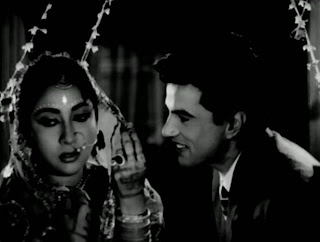 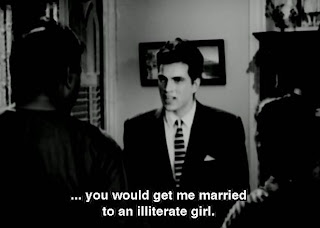 Poor Lajoo not only is she unable to read or write, turns out she's useless at cooking and housework as well 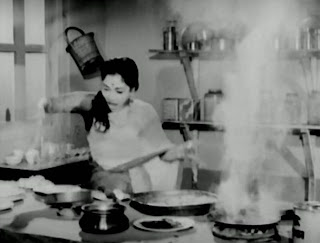 she can't cook and burns up all the food 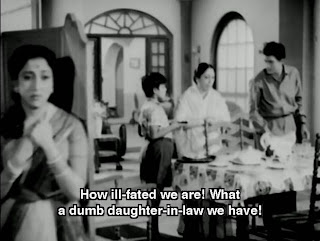 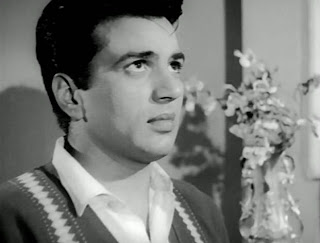 Deepak is won over by her kind spirit and forgiving nature and pleads for forgiveness, he promises he'll help her learn how to read and write 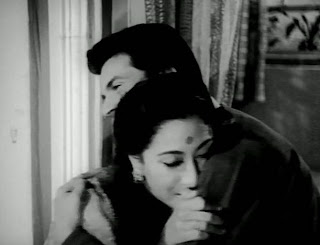 One day when Lajoo unknowingly offers Deepak's ill brother a bottle of poison for his remedy, Deepak's dad thankfully walks in and stops her from feeding him the poison, Thakur threatens to throw her out, her brother Choudhary who's come by to visit gets involved by sticking up for Lajoo only to be told off by her telling him 'not to interfere in their family affairs' 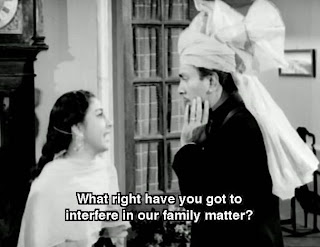 Choudhary who had come a long way to see Lajoo leaves, when Deepak arrives to find that he's gone as a resut of his father's attitude, he goes after him in abid to apologise and bring him back home, on his way he meets with a fatal car crash and dies thereby making Lajoo a widow 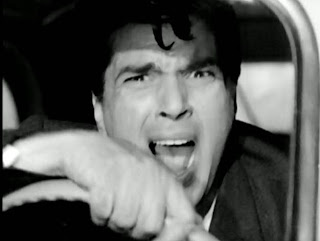 Following his death Lajoo who's pregnant with Deepak's child is driven away by his family, she returns home only to hear news that her brother is nowhere to be found, a lonely Lajoo must now fight for her survival, will she be able to manage this 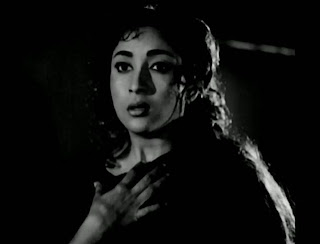 Anpadh though a bit preachy on its advocacy for the education of girls is a well balanced melodrama, the film makes the point that being wealthy isn't the be all in all, it em but rather extols the importance of discipline and education. It also exalts education as the ultimate goal, or something one should definitely strive for, the film also sheds light on how the uneducated are considered Inferior, it seems people who had no education back then were looked down upon, this is still the case with many people today but I personally as much as i believe in the importance of education don't consider it the 'be all in all' and i don't consider others with no education as 'lesser beings'

Without sounding cliched, I've known many people with no education who have gone on to do great things but alas this was post independence india and i can only imagine/understand that education was seen as the way forward and a way to build yourself up to stand on your own two feet, very similar to John Chacha's desire for Bhola & Bhelu in Boot Polish (1954), in his desires for them not to beg, but rather work and earn a living. 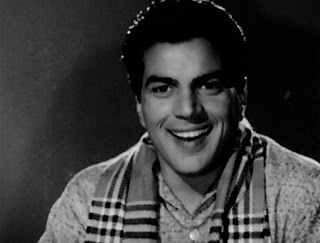 Perfomance wise Dharmendra though in for a short time makes his presence felt, this film really made me realise how much of a beautiful actor Dharmendra really is particualrly in the 60's , his work in the 70's and 80's are way too pale in comparison to that in the 60's 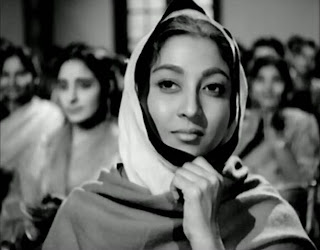 Mala puts in a fine perfomane as the illiterate girl and the passionate mother who would do everything for her child, a bit melodramatic but beautiful performance none the less. here Mala lays the young girl girl and old woman with great aplomb 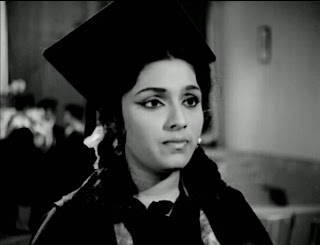 This looks pretty good and i can usually tolerate mala in one of those put-upon women movies that she always does! And Dharam's facial reactions look hilarious!

Oh yes, I was also surprised to see Bindu in this movie. Dharam looks soooo yummy. And the songs were good ! Great actually.

I'm not destined to see this film. Every time I've asked for a delivery of the DVD from my DVD rental company, they've sent me another Anpadh which stars Vijayendra Ghatge and Sarika.

Dharmendra's character dies? Eeekk! No, now I don't even want to see this - no matter how much I like Aapki nazaron ne samjha.

@ Rum its actually a pretty decent watch, yeah i know Dharam ahd some hilarious looks on his face, he was a bit thin here though

@ Avdi he was indeed yummy but a bit thin though, i thought Bindu started acting in the late 60s/70's hence my surprise as well

@ dusted off its quite a worthy watch, the other songs a re fab too and i'm indeed familiar with that other Anpadh, i've never seen it though but the posters kept coming up while i was looking for the posters to this one

I was watching this movie on tv (again) during my school days, and had a power-cut in between. So I missed out on the scene where Dharmendra's character dies (could figure it out that he's no more, but I always wanted to know how he met his end). Quite preachy but watchable. Love the songs again - esp Aapke nazaron ne and Sikandar ne poras

gr8 job wit d review..dint knw tat d song i had heard during my childhood "sikandar ne porus" is frm tis movie!! :)dharamji luks so dashy tat wudnt be surprised if he had a lot of admirers post tis movie ;)..else "aapki nazaron ne samjha.." is such a classic song n these lines-...." kyu main toofaan se daaru,mera sahil aap hain..." in d song leave me in an awe!!

Thanks The bard this was indeed one of Dharam-ji's early role, i love the aap ki nazron song too, and its the major reason i watched the film and for Mala of course