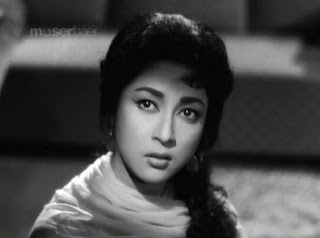 Mala Sinha without doubt remains one of my all time bollywood divas, i watched my first Mala Sinha film 'Ankhen' (1968) about this time last year, way before i even started this blog or dreamt of starting it, I fell in love with her grace, charm and Beauty.

Mala was born Alda Sinha to Nepalese Christian Parents, she later changed her name to Mala for professional reasons, her acting career began when Bengali film maker Ardhendu Bose gave her a starring role as a child artiste in a Bengali film, Mala later relocated to Bombay and starred in a few dismal films before being noticed by the playback singer Geeta Dutt who was taken aback by her charm, Geeta introduced her to movie producer Kidar Sharma who cast her in Rangin Raaten where she starred alongside Geeta Dutt and Shammi Kapoor

Following this Mala kept working on perfecting her Hindi and was a singer of some repute on All India Radio, her big break came when acclaimed director Guru Dutt (Geeta's Husband) cast her as Meena in the classic Hindi film Pyaasa thus a star was born and Mala's career took off 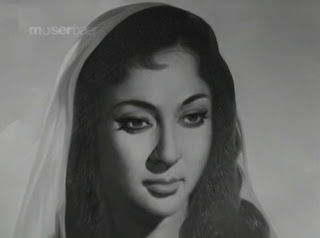 Mala became a massive superstar so much so that she often got first billing before some major heroes like Biswajeet, Joy Mukherjee, Manoj Kumar and Dharmendra. In fact most of the success of the classic hindi Spy movie Ankhen relied partly on the massive star power of Mala as Dharmendra wasn't quite a big star then 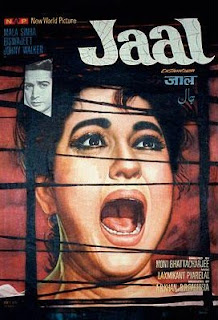 Asides from actors Mala also worked with all the top prducers like B.R. Chopra, Hrishikesh Mukherjee, Subodh Mukehrjee, Guru Dutt, Ramanand Sagar etc. Mala also gave great range as an actress, she did challenging roles most other leading ladies would have shied from, Mala played the greedy woman who married for money in Pyaasa, the mother who gives birth out of wedlock in Dhool Ka Phool, the muslim girl who gets pregnant out of wedlock again in Dharmputra, and the adulteress in Gumrah. Mala was a beautiful performer, indeed i'm aware of all the 'a bit too melodramatic accusations' but Mala was a great performer par excellence often giving very memorable performances 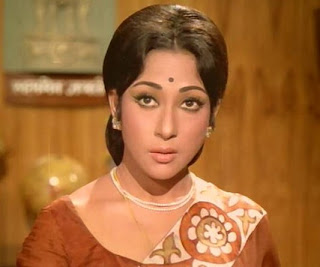 Despite all this i can't help but feel in some way that Mala never really got her due from the Industry awards people, now award shows aren't really my thing, i find them to be very partial and not very fair but still something in me feels uneasy that India's most prestigious film award fraternity 'Filmfare' haven't honoured Mala with a Lifetime Achievement award yet many of her contemporaries and actresses/actors who came after her have all been honoured with one, something just doesn't feel right (of course there's still time to correct this filmfare)

Anyway for the next few days i shall be reviewing some of Mala's well acclaimed work, i had initially planned to do this during her birthday (Nov. 11) last year but due to some work commitments it was impossible but better late than never

You can read more about Mala at bollywood hungama
Posted by bollywooddeewana at 21:08

She looks so beautiful in the first screen cap.
Though she was 'a bit too melodramatic' , she has some subdued roles and some very good movies.

I had seen all these movies - Dhool ka phool, Gumrah, Aankhein, Phir kab milogi, Baaharein phir bhi aayenge, Maryada, Sanjog (I rewatched it few months back) etc as a kid so don't remember much of them, not the melodramatic part at all ;-)
Had seen Pyaasa and Dil Tera Deewana almost a year ago.

Looking forward to your reviews!

Pyasa was her first movie (in a way)? She looked so confident there. Who can forget the song Hum aapki ankhon me? Wow !

Dharamputra is another movie of hers that I havent seen and wish to.

@ Avdi Dharamputra is a good one the songs are really good, i still haven't seen Pyaasa

I have seen many Mala Sinha movies and she always came out as my idea of a perfect woman. I specially cherish her role in AASRA opposite Biswajit and that singing I can't forget: TUM KAUN HO BATAAO TUMHAARA NAAM HAI KYAA...and is thus mistaken for a would to be bride by the hero - some Cindrella like story!
I totally agree with you as I have always felt that Mala Sinha never got her due from the film industry. That's very, very strange, for she's senior even to Asha Parekh. So the reason could be anything. Is it that infamous affair of her daughter with Nadeem of Nadeem-Shravan? At that time she went to Bal Thackarey for help!
All said and done, Mala Sinha has always been, and always will remain one of my favourite heroines.

Thanks a lot for that additional information Nasir, the filmfare awards strike me as anything but fair, i shall definitely look our for the movie you pointed out and she is one of my all time favourite actresses too

Thank you Nasir for the info!
Didn't know about that! Pratibha was in the same college as I, in Ruparel. She was very much guarded by her mother.

Well, I think as well she should be given a honorary Filmfare award. They are as it is so carelessly awarded.

@ Harvey Mala definitely deserves it, wonder what has taken them so long when many of her peers and a lot of more of her juniors have been awarded one

Indeed Harvey i remeber reading the same in quite a lot of places good decision Geeta Dutt made, i've also heard Mala was a wonderful singer though she was never allowed to sing her own songs in films as for Rangeela Raatein, I have no clue i got my info from the bollywood hungama artice i've linked in the post

Thanks for that lovely song, i guess that's her being a drag king ;0)

i love old movies, and the song's to awesome , i like to see the old movie's because the story is to awesome,