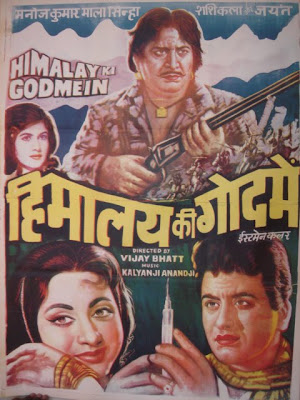 Himalay Ki God Mein (In the lap of the Himalaya's) is yet another one of Mala's more notable roles, she plays the stereotypical innocent village girl in a charmingly funny way, this film earned Mala her third filmfare actress nomination alongside Meena Kumari for Kaajal and Sadhana for Waqt, she was upstaged by Meena who won for Kaajal 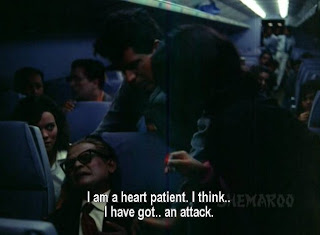 Thus their toy aeroplane makes a landing in the jungle, not even a make shift airport but a bloody jungle with a sandy runway (LoL) 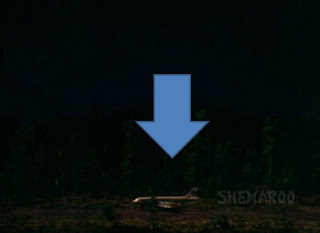 Sunil gets off the plane to get help only to be confronted by daaku's (dacoits) who rob him and beat him to the point of exhaustion, he's left in a critical state only to be rescued by village belle Phulwa (Mala Sinha) and her friends 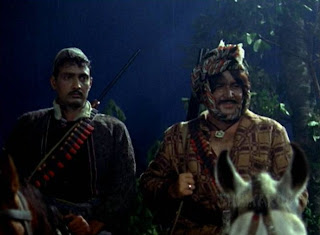 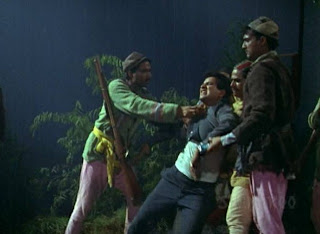 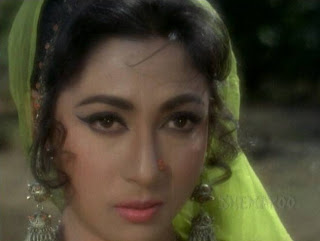 Surprisingly for someone away from home and whose family are worried sick about him, Sunil seems very cheerful and without a care in the world, he and Phulwa start developing a bond. Sunil's health is back on full form and he returns to the city, he thanks Phulwa and her guardian Dayal (David Abraham) and leaves them his contact details 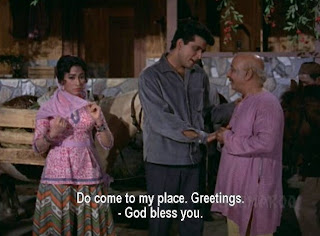 When Dayal falls ill Phulwa takes him to the city to seek Sunil's help, he then decides to leave the fast city life behind to help the vilagers of the Himalayas as they have no doctor in the town 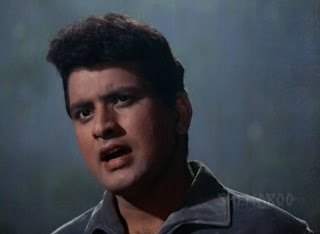 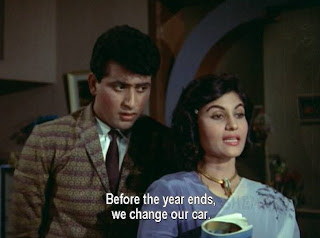 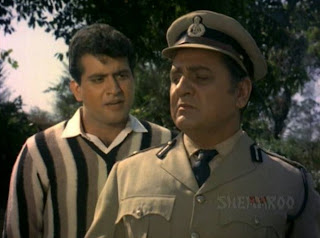 At the village he's met with opposition at first by the villagers who believe in traditional healers (Mukri & Kanhaiyalal) who are in fact fraudulent, the villagers warm up to Sunil over time when they see the imapct of his work 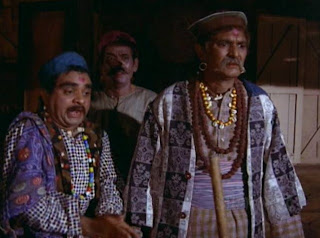 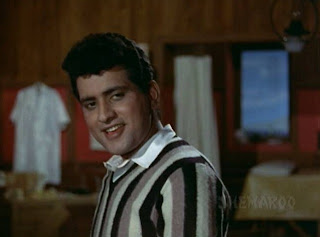 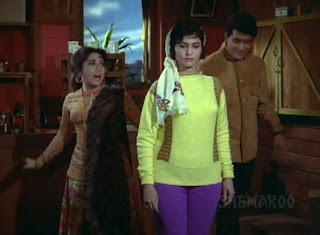 Meanwhile Sunil & Phulwa have fallen deeply for each other 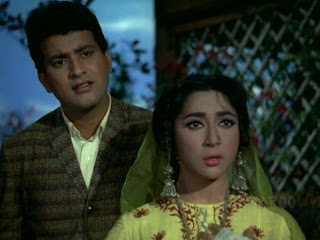 Will Neela succeed in her mission to bring him back? Will the dacoits realise Sunil is the son of the Inspector Mehra who's out to get them

An enjoyable film overall, it was not as great as i was expecting, its the kind of movie you watch on a rainy sunday afternoon, i guess my expectations were really high because the film won the 1966 filmfare Movie of the year award, by now i think i should have learnt the lesson that just because a film was awarded 'movie of the year' doesn't mean its an exceptionally great movie.

Still though, the decent acting, fabulous songs & scenery makes it enjoyable, i can tell the film won for its Swadeish kind of philosophy of kindness and love for humanity over one's own personal ambition as could be seen in Sunil's decision to leave the fast life behind in order to become a doctor in a local village. Also added to the narrative is the now familiar trope of a dacoit being a lovable person at heart, and social stigma/prejudice being the reason for their waywardness

Decent performances all around, i loved Mala's Village belle character, it had the potential to be annoying but Mala keeps it refreshingly funny and charming

she also gets the chance to show off some of her dancing skills, i've rarely seen Mala dance apart from the 'Lootee jaa' number in Ankhen 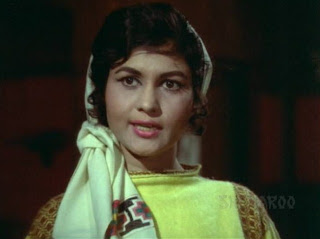 Shashikala is fast becoming one of my favourites, no one could play a detestable/contemptuous character like she often did

Superb music from Kalyanji Anandji (the credits indicate they were assisted by Laxmikant Pyarelal) indeed the music of this film is what makes it memorable for many, highlights include the beautiful ballads 'Ek Tu na mila' vibrant 'tu raat khadhi thi' & 'kankariya marke jayaga' where we get to see Mala doing some fab dancing, and the evergreen 'Chand si Mehbooba'

I've always wanted to take a chance on this film and watch it, but now you've convinced me with the cute picture of Manoj! Who i could watch in almost anythng! Was there many scenes of him covering his face in anguish lol?

I saw this movie on ye olde doordarshan. Though I dont remember all of it, i think the ending was 'all izz well'

Like avdi, I saw this long ago on Doordarshan too... don't remember very much of it except the basic premise (city doc goes to village and falls for a local girl as he goes about healing the villagers). I love the songs, and since I don't mind Manoj Kumar in this era (can't bear him in the 'suffering hero' roles of later films!) - I wouldn't mind seeing it again.

I saw it long ago too..Like dustedoff, I like Manoj Kumar in this era. I had seen this and Hariyali aur Raasta (it also has all 3 of them in the lead - Manoj, Mala and Shashikala) back to back. I like the songs, esp Chaand si mehbooba and Mala's character (esp her name) - innocent and funny. I remember the scene where one falls sick and the other one takes the medicine.

Wow! I didnt realise Mala Sinha could dance like that!! That is her and not a body double (like Padma Khanna for Meena Kumari in Pakeezah)? I love the songs from this film, too. They are lovely. I always confuse this with Haryali Aur Raasta, which also had the same leads, lovely songs and a Himalayan village setting.

Lol Rum Thats not Sunil Dutt its Jayant who played the Dacoit, it does look like Sunil on the posters though. Surprisingly no face covering in Anguish from Manoj here, cool performance actually

@ Avdi Yeah the ending was all indeed all iz well but all in all a good movie still & to borrow your word the songs are indeed Manna..lol

@ dustedoff I would like to hear your thoughts when you do watch it it was quite a good film, I liked the whole turning his back on capitalism thing for the sake of the people

@ Sunehri Indeed it was Vijay Bhatt who directed both hence the similar cast, i actually liked Manoj in the 60's-70's, he did some fun films

@ bollyviewer indeed i was surprised myself as i've never seen her dance,it is indeed Mala and not a body double, now i think might have to give Haryali aur Rasta a go

Ah! I saw this a few weeks back in an effort to see more Mala Sinha, since I'd only seen her in Pyaasa(1957); plus I've been on a Manoj Kumar, and "see all filmfare winners" kick too. LOL on the screen cap of the plane landing. That was spectacular. I enjoyed the scene when Mala Sinha was gone and Manoj was working in his make shift clinic and asked her to pass him iodine, or needles, or whatever, and then would pause sadly, forgetting she was indeed not there. Great evil fiance played by Shashikala. What else have you seen her in that you liked? I'm in total agreement with your rating and assessment of the film. Nice work yaar!

Thanks Sita-ji there are so many Shashikala films where she plays similar roles that i've lost count,she was great in Gumrah where she terrorises Mala Sinha, and then in Souten (1983) where she advices her step daughter to have an abortion, just so pregnancy doesn't ruin her figure (i soo didn't make that up)

I saw this long time back so have forgotten most of it. I quite like the pairing of Kumar and Sinha and I'm immensely fond of Shashikala. Should be quite a likeable film. I'll try it soon. And it has Kanhaiyalal, one of my favourite character actors!

@ Sharmi Its not all that bad to watch, but its not one i would go and rewatch over and over again, for me that's a big thing that separates classics from non classics in my opinion, it has to be something i can watch again and again

very..... thanks to people who made such good movie.This is my all time favourite movie.

@ Sonia Thanks for stopping by and commenting, i found the film enjoyable too