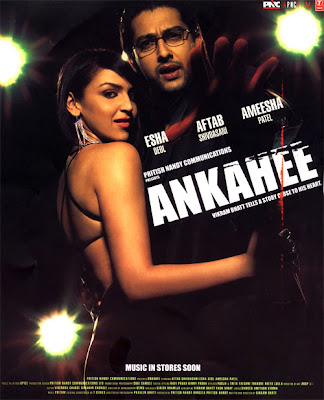 I have to admit, and perhaps as is obvious by now, i'm a bigger fan of the old bollywood films than the currrent ones, but now and again there comes a film from the current era that makes its way onto my favourites list, Ankahee (Untold) is one of them, perhaps not the most perfect film but i liked the story, enjoyed watching it and enjoyed the performances
When Kaavya (Esha Deol) a reigning beauty queen& starlet arrives at Dr Shekhar's (Aftab Shivdasani) hospital after attempting suicide, he takes pity on her and they start having an affair

However Dr. Shekhar is a married man with a lovely wife Nandita(Amisha Patel) and daughter Sheena, his friend Dr Kunal (Amin Hajee) warns him about Kaavya, alerting him on her Manic depressive personality and that nothing he does can ever make her happy 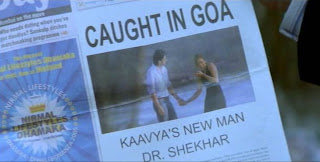 Will he be able to make amends and save his marriage? Will Shekhar continue his affair with Kaavya?
I loved and thoroughly enjoyed watching this film, one little thing that bothered me though was the lack of attempt to portray two different decades, considering the film was set in two different decades, the director could have made an attempt to mark out the difference more realistically by adding fashion and cultural artefacts more typical of each, in particualr the earlier decade which was the late 70's/early 80's
A big part of the movie that stayed with me is What happens when we fail to draw up boundaries in our lives as could be seen in Dr Shekhar's affair with Kaavya, true he felt sorry for her but had he drawn a boundary, most especially over that of his marriage, his life wouldn't have been distraught
On the other hand Shekhar's straying could have been as a result of his over devoted wife who forgets her own aspirations, even when she was encouraged by her husband to focus on her own ambitions. I love this film's angle on this, yes she wants to be a good devoted wife, but over dependency or being too clingy is smothering and one does get the impression that its this clinginess that leads Shekhar on to commit adultery

I've never seen Aftab Shivdasani in a central role and he just excels as Dr. Shekhar here, he's not over the top with his acting here, and he pulls it off with just enough restraint

Amisha Patel is one of my favourite actresses of modern times, she's on fine form here, a bit melodramatic but lovely none the less 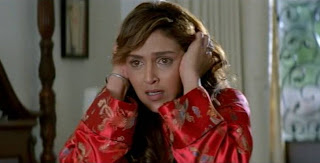 Esha Deol, where do i start, for all those allegations about star kids having it easy, Esha surely hasn't, sure it probably gave her a footing, Esha hasn't enjoyed immense success or fame. What an intense actress she was in this, she really executed her performance as a manic depressive, i believed her as the over possessive, manipulative Kaavya. Esha is a great actress and i hope she picks or is given more chances to develop her talents, this is an actress i would like to see more of

I love the gigantic picture of her face on her living room wall
Fabulous songs from Pritam none of his usual peppy numbers here, rather the music here is more sentimental and are mostly ballads, like the lovely 'Lamaa', 'aa paas aa' , 'tum se yun milenge' and my favourite which is 'Ek pal ke liye'
Paisa Vasool rating: 7/10
Posted by bollywooddeewana at 11:48

Lovely song. And the movie sounds interesting too.

I am not fond of new movies either....I love the old ones better, but there are few exceptions.
Story-wise and performance wise this was a very good movie...well executed. But it never made it big at the box office.
Aftaab can act well...it's such a pity that he doesn't get many roles with substance. When I saw Kasoor, I was amazed by how matured he looked as an actor (and that was quite early in his career, I guess, right after Mast).
Same goes for Esha as well.
Ameesha - I liked her in her first few films...Kaho Na Pyaar Hai and Gaddar and Humraaz...but I happened to see Zameer by mistake one day...and that totally ruined my fondness for her :P It's such a sick movie!

That is a very lovely song indeed! And Esha acting well? That I've got to see! I havent been too impressed with her acting in the few films of hers that I have seen - she's too much like her Mom, but without Hema's charm and beauty.

I haven't seen this either! But it sounds like something I should try and get hold of. And Aftab Shivdasani is, in my opinion, an underrated actor. He was pretty good in Kasoor, as well as in Hungama, though in the latter he wasn't the lead.

@ Avdi It is indeed, get it on dvd or rent it, its worth watching

@ Sunehriyaadein I agree i just got Kasoor, its my weeknd viewing. I loved Amisha in all the films you've mentioned but looks like i shall avoid Zameer

@ bollyviewer She does indeed remind me an awful lot of her Mum, she's very good in this, she really brought on the craze as a manic depressive

@ Dusted off Thanks for those two recommendations, i have Kasoor for my weekend viewing and i'll try and get my hands on Hungama as i want to see more of him