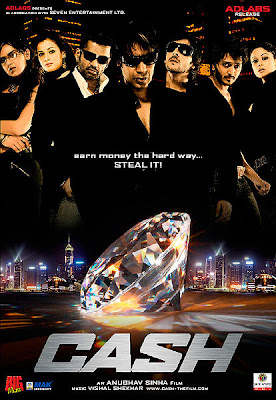 Lots of jokes do indeed prevail about how this movie should have been called 'Trash' rather than Cash, i had read lots of reviews that wrote it off and decided to see for myself, hoping there might be some ridiculous camp moments i might i enjoy, but unfortunately there was little to keep me amused or entertained
The film revolves around some long lost diamonds stolen from India by the British in the 18th century, the diamonds get lost at sea only to be found years later, where its split into three, one of the diamonds lands in Cape Town south Africa. Karan (Ajay Devgan) a professional robber enlists the help of four robbers to assist in stealing the diamonds

and his girlfriend Aditi (Dia Mirza)

Will they be able to carry out the Heist?
Indeed you might have noticed my quick write up of the plot synopsis, which is unlike other movies i review on here, it's because this movie was a big disappointment, What could have been an exciting, fun even if yet camp movie is let down by a dull script which made watching it quite tedious, there were some goodies though
I loved the brief comic animated sequences with which some of the characters were introduced

In a movie where the cast are let down by the script or should i say whose script does their talent no justice, i couldn't help but admire and fall for Shamita Shetty's energy and fierceness, what a babe she truly is

the Hip Soundtrack by Vishal Shekhar is what i loved most about this film, thankfully i had rented this film but if i had spent my own CASH on it, i would have been consoled by the songs, if you love Pop Music and R'n'b you'll love the songs of cash
there's the drum and bass influenced title Track 'Cash'

'Naa Puchho' which mixes some subtle traditional strings with a kicking R'n'b bass,

Overall watch Cash only if you're a die hard fan of any of the actors or better yet still for the songs if that's your thing, i really hope the director Anubhav Sinha who's directing Sharukh Khan's forthcoming action film R.A 1 has stepped up his game and delivers a super exciting and highly entertaining film with R.A 1
Posted by bollywooddeewana at 21:49

I had even forgotten that I had seen this one! And that too in theater. My sis is a big fan of all these guys - Zyed, Sunil and Ritesh. So when this released she wanted to go for it and I went to give her company. For the first time, I felt like walking out of the theater in between.

Goodness, I don't even remember hearing of this film (and that's saying a lot; of the newer films, even though I see very few, I at least know that they've been released). I'm not a diehard fan of any of these people, so this is definitely going to go unseen by me!

@ Sunheri Hai i gone as well i think i would have been fighting the urge too, the songs are the only thing worth remembering


@ Dusted off Stay well off, i tell you. I myself i'm not so much into the current crop of films, and ones like these often deter my interest even more

I've seen this lots at movie store shops and never picked up. Sounds like that was a good choice. It's funny how a movie with a pretty decent cast can go so wrong (oh, and I barely recognize Ritish in that pic - he looks very different all scruffed up).

When I heard that Anubhav Sinha was directing Ra.1 I got a little nervous. It's a big venture that he's undertaking and I hope, for Shah and all his fans, that they can pull it off.

I liked the songs before I saw the movie...but the movie itself was such a big disappointment that I change the channel even if I happen to see anything related to this movie on tv ;-)
Luckily I had a friend who had seen this movie before I did (he happens to be a huge Dia Mirza fan) and he could sympathize with me...so he kept smsing me jokes non-stop and that kind of kept me entertained.

@ Shell I hope so too, the songs are fab though as i've siad if anything watch if for the songs especially if you like R'n'b/ Hip Hop

@ Sunehriyaadein i love Dia too, but she barely had much to do in this, she didn't even get a song picturised on her apart from the theme song i think, overall a forgettable movie