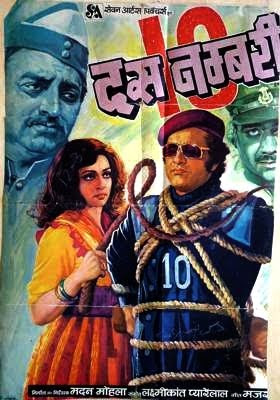 This is a film that would have been well suited to the 70's week but due to time restraints, i couldn't get it up on time. This is classic 70's masala at its best with separated families, mental illness, greedy villains and the whole lot. Indeed it is hard for me to think about this movie without remembering my time as a child in Nigeria where Dus Numbri (Number 10) was immensley popular, the songs the film, the stars were all well loved and in fact is embedded in the minds of many Nigerian bollywood lovers, it won't be an understatement to call this film a Nigerian Cult Classic


Shivnath (Abhi Bhattacharya) is a very honest & dedicated cop with a lovely wife Radha (Kamini Kaushal) and son Arjun. When Shivnath exposes a currency fraud ring which his friend Karamchand (Om Shivpuri) runs, Shivnath is framed for murder by Karamchand 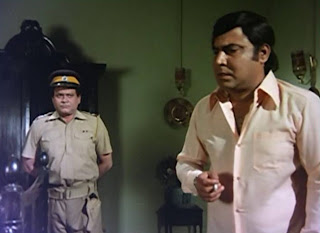 He's sentenced to jail and his wife Radha goes mental as a result of the trauma, when her friend Sundari (Hema Malini) decides to reveal her husband as the main culprit of the crime she's stabbed to death and her baby is kidnapped and given to a drunkard (it can't get any crazy than this, or can it?) 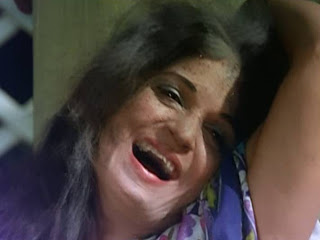 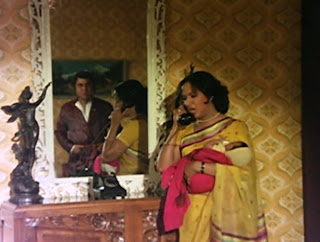 When Arjun goes to visit his Baap in jail, he's told his father has escaped, poor Arjun then goes to visit his mother in a mental institution only to find other children pelting his mentally ill mother with stones, angry Arjun retaliates by stoning them back, he's arrested and sent to a reform home 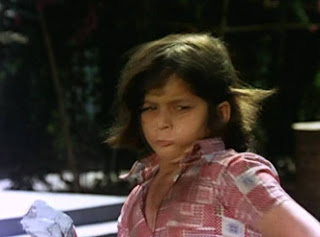 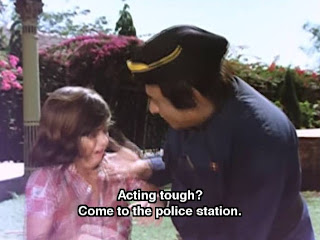 Arjun grows up in and out of reform institutions as a result he's given the name Dus Numbri (defined as a history sheeter who must report to the police station regularly and can be called by the police anytime) He becomes a strong advocate for the poor as well as a fighter against injustice, he earns his living by taxing smugglers, making sure he gets a share of their shady deeds 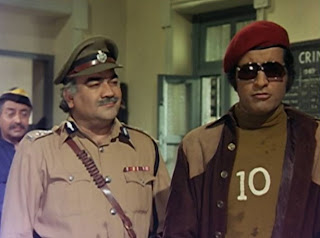 Notice his sunglasses, beret and no.10 jacket , thats what our hero wears all through the movie

Meanwhile Sundari's stolen daughter grows up to be Rosie (Hema Malini) an exact doppleganger of her mother, and a counterfeit card gambler, Dus Numbri outsmarts her at her own game and when her plans to get him beaten up backfires, she starts developing a soft spot for him (hmmm) 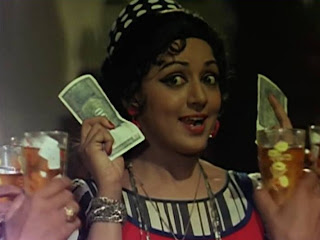 While being chased for stealing one day, Rosie lands into Dus Numbri's mother's mental home, the sight of Rosie who looks so much like her friend Sundari brings back memories to Radha 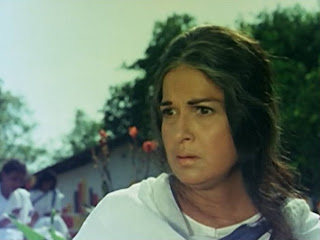 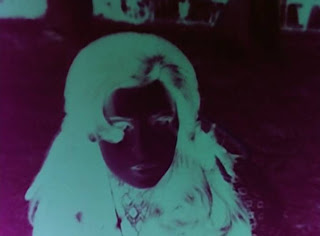 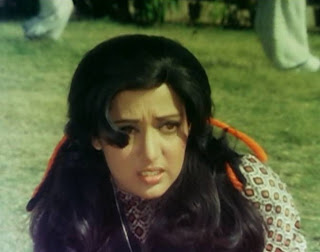 The doctors notice this and Rosie is used as a test to help bring back Radha's memories and restore her mental health, Dus Numbri is very grateful to Rosie, hence they both fall in love (awwwww) 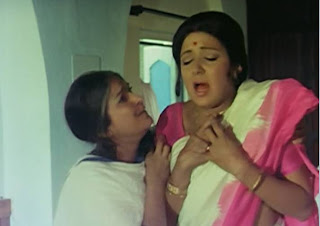 Rosie's uncanny resemblace to her mother leads to her being recognised once more by Shankar (Shyam kumar) a gang member who had murdered Sundari, he sees Rosie as the perfect opportunity to make money off her father Karamchand who had long thought Rosie dead 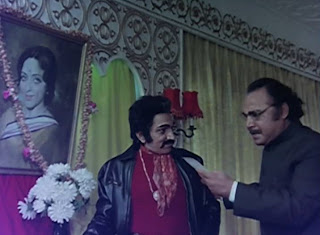 On his way to get Rosie to her dad to claim his R200,000 he's confronted by Dus Numbri & his aide Karan Singh (Pran), he confesses how he had murdered Sundari because she had proof to set Shivnath free, he also reveals Shivnath is alive in a jail in calcutta, when Dus Numbri presses him for more information he's shot dead by his fellow gang members 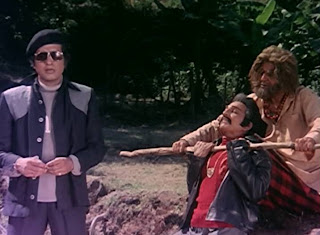 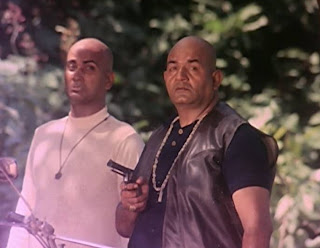 Thus the search is on to find Arjun/Dus Numbri's father, will karamchand be brought to justice? will Dus Numbri be able to get justice for his father? 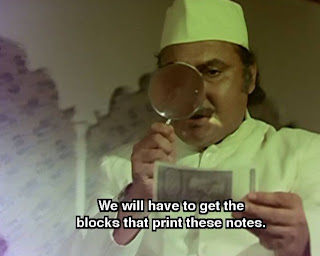 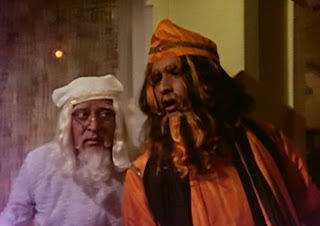 A corrupt policeman who'll stop at nothing to avoid being exposed 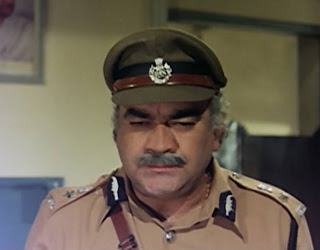 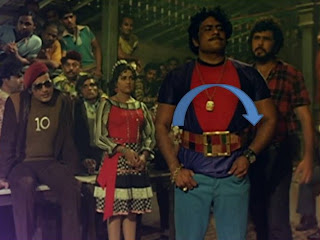 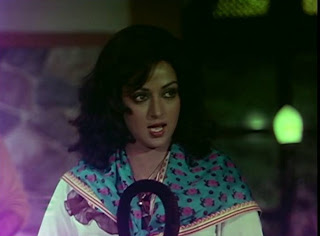 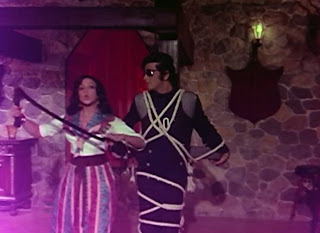 Dus Numbri is a perfect commercial masala potboiler and as i've mentioned already, you have all the elements in the right doses that makes for a hilarious masala flick, thats not to say its not without plotholes and other faults but seriously who cares about those when you're watching an entertaining film like this, and as a witty imdb commmenter puts it, you might just find yourself dressing like Dus Numbri at halloween 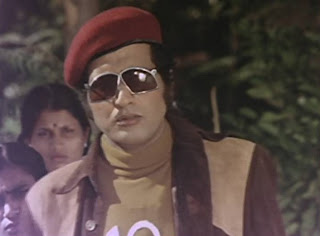 Its an easy look to achieve, make sure you have a beret, a t-shirt that says 10 on it
and groovy 70's shades and you're done 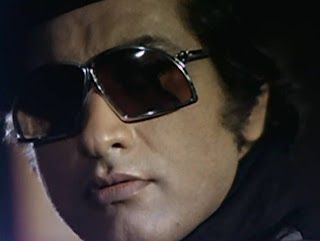 The film of course became a massive hit upon its release further establishing Manoj Kumar as "the uber nationalist who appealed to the masses as a sort of common man who fights India's corruptions and injustices" as rum notes on her fab 70's post on Manoj. Due to its crazy popularity and box office success Dus Numbri was remade as KD NO.1 in Telugu


Very Memorable soundtrack from Laxmikant Pyarelal, i usually don't embed more than 2 songs in my blog posts but the special memories this soundtrack hold in my mind means i shall embed all my favourites

Dus Numbri is available on dvd at Induna
Posted by bollywooddeewana at 09:09

Had this movie any other hero than M Kumar, I would have loved it.

Though I liked Roti Kapda aur Makan despite him, even he couldnt spoil 'teri do takiyan di naukri'

I had seen this at the time of its release in Mumbai (Super Cinema) but don't remember much about. I love the song MAKA NAKA that has a Goan flavour it.

This looks so fantastic I want to watch it now! Gosh Hema is gorgeous. Thanks for posting all of the songs. Wah wah! The search begins.

So Manoj actually invested in something other than his hands to cover his face?! ;-)

Ooooo I need to see this, did Manoj direct this as well? The outfits in this film are crazy, and I have to have a pair of sunglasses like that!

Good heavens, why haven't I seen this till now? Sounds like so much fun! Minus that belt, though - I'm not too sure about that. ;-)

@ Avdi I loved this film especially for him, i think it probably wouldn't have the same touch had it been another actor

@ Nasir, it does indeed have a Goan flavour to it, Hema's character was Rosie Fernandez which suggest a Goan heritage/upbringing

@ Shell You're welcome good lick finding it, be sure to let me know what you thought of it

@ Bollyviewer Indeed and some super fly shades at that :0)

@ Rum Manoj didn't direct this it was Madan mohla who did, I know right be sure to let me know when you find it, it looks like something you'd easily find in a a costume shop

@ dusted off It is indeed fun, Insane Fun. i know lots of people that would kill for that belt, while a bit too wide for my liking the patterns on it are amazing

Awesome... this brings back childhood memories of watching 'Dus Numbri' at my aunt's house and singing all the songs with my niece and nephew... I remember loving this film and all the great songs! Plus Manoj's character was just the epitome of cool to me! Need to rewatch this asap.... Definitely a 'Nigerian cult classic' as you tagged it.

@ Thanks Daddy's girl i just had to, this was one movie i watched repeatedly as a kid too plus it just seems so embedded in the minds of many bollywood loving Nigerians

It's been ages since I watched this now. But this used to be aired pretty often on TV until few years (10-12 yrs) back and I have seen it so many times that I remember almost every scene. It's such a fun-filled typical 70's masala movie. I simply love Duniya ek numberi and the goan flavoured Maka naka and Manoj's shades (I wish he used such fashionable shades to cover his face more often than he used his hands ;-), suits him better, na?)

@ Sunehriyaadein Lol i actually don't mind the face covering with his hands, i simply love the man

no other person would have fitted that role other than the Dynamic Manoj Kumar..Not Amitabh, not Dharmendra..Not Rajesh Khanna or any one else!!
He perfected that "Dus Numbri" personae with Unbelievable gusto,Sheer Brilliance and a Midas touch, that only he can give..

Needless to say, the film became a 1976 Runaway Blockbuster taking First(1st)Position at the indian boxoffice and is widely regarded as an unforgettable classic, whether in india and of course Nigeria..

@ GKK i so agree with your comments, its one of his if not his most fun role

classic growing up for me too in nigeria.....brings back really good memories....i read ur blogs but i stumbled on this post becos i was searching for where i could get this movie and oda classics as well.....still searching though.....if u know of a place pls enlighten us on the blog....i live in the US.....thanks once again for the wonderful memories

Hello kiki tahnks for your very kind comment, its Bollywooddeewana here and you can get the dvd for dus numbri in the link below the same website also has other classics

tanks so much @bollywooddeewana

i want to download the song dunia ek numbari and i searched a lot but i didnt found pls help. if possible provide me a link.

Rebiew Honest and Anonymous feedback tool from India. Help others becoming a better version of them while you also work on your negative points.