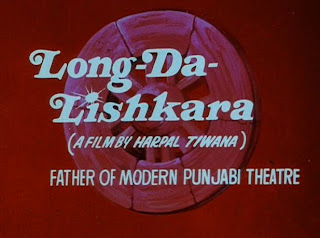 Yes this blog is called bollywood deewana but today i shall be taking a quick peek at the Cinema of Punjab which is also known as 'Punjwood' for those of you who know your bollywood really well there are two recognisable faces in the form of Om Puri and Raj Babbar, this is my first Punjabi film and i have to say that i enjoyed it very much, a number of remixes of the Title track prompted me to check out the film
Raja (Raj Babbar) the son of wealthy royals returns to his mum (Nina Tiwana) in the Punjab after a period of 15 years spent in Canada 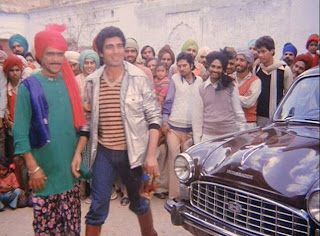 Check out his silver parka and Knee high boots
He meets Preeto (Harpreet Deol), the family maid and falls in love with her, also vying for Preeto's affections is local villager Maya (Om Puri), when he (Maya) finds out about Raja's affection for Preeto, he's furious and swears to split them 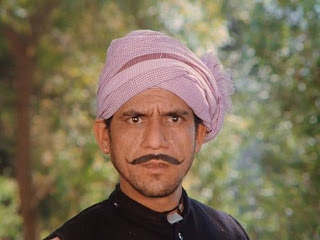 Meanwhile Raja goes in search of his old friend Channa (Gurdass Mann) only to find out he has become a Sage. Channa had become a Sage after the death of his lover who had died due to their different class backgrounds, Raja is shocked such attitudes still take place 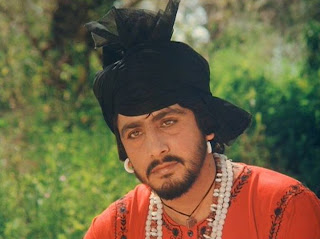 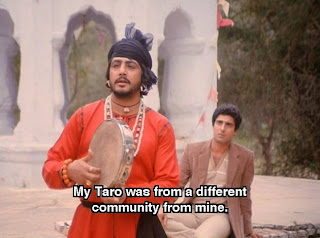 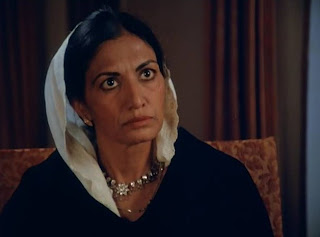 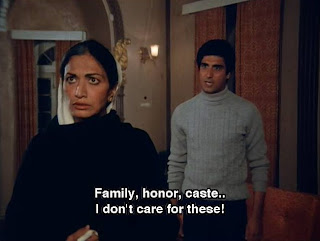 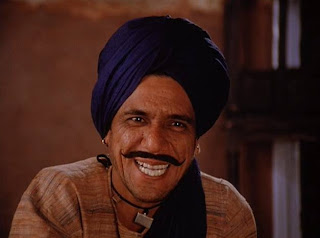 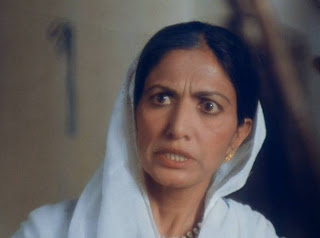 A depressed Preeto is told by her Aunt Gulabo (Nirmal Rishi) that Raja's father was the main reason behind her mother's death, before her death she had promised her mother that Preeto would avenge her death by becoming the Mistress of the mansion 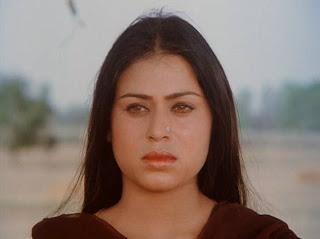 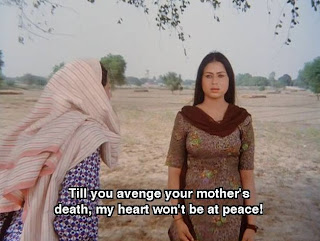 Will Preeto manage to become the Mistress of the Mansion? Will she & Raja be reunited or will she be married to Maya? Watch Long da Lishkara to find out
Overall a sweet romantic melodrama with a dash of 80's revenge style saga thrown in, i was a bit unsure of what to expect, but i really enjoyed this, its very much like the the atypical bollywood romances of the 80's trying to overthrow old customs & traditions for the sake of true love
and of course since it was shot in the Punjab we're treated to lovely green fields and colourful outfits and dancing in these green fields 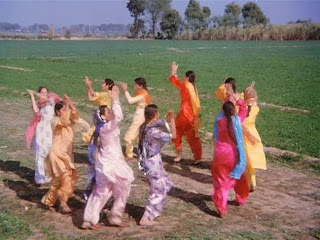 Performance wise i loved all the characters and even though they were quite one dimensional and their acting felt a bit like theatre acting, they were very likable. I especially liked Preeto (Harpreet Deol) and her aunt Gulabo (Nirmal Rishi) 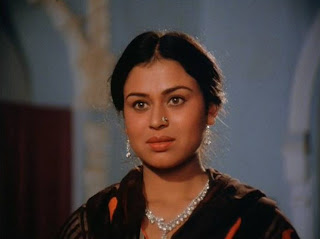 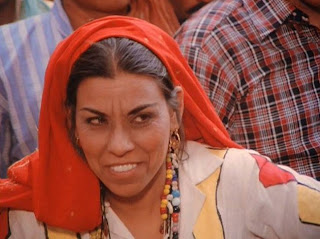 and of course the dear Raj Babbbar, i know I'm probably one of a handful people who love Raj Babbar on the blogosphere, and I'm fine with that, i love him and his wooden style acting he seems to get criticised for 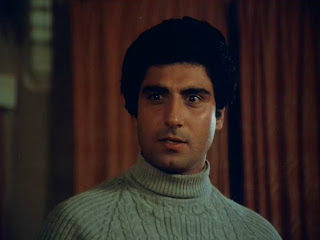 I can actually see bits of Prateik in him
Fab music from Jagjit & Chitra Singh, there's the lively upbeat 'Sare Pind Vich' beautiful love song 'Ishq hai Logoo' a punjabi classic song 'Challa' a lovely 'Giddha medley' and then my favourite of the whole lot and the very reason i checked out the movie is the wonderful 'Long da Lishkara' picturised on Lovely Punjabi Ladies in colourful outfits in picturesque Punjabi fields
Paisa Vasool Rating: 6/10
Posted by bollywooddeewana at 15:04

Even though I'm married to a Punjabi, I've never actually got around to seeing a Punjabi film (he hasn't either!). I'd have thought Punjabi films would generally be of a fairly high standard, at least as far as acting is concerned - since a lot of Hindi cinema's bets actors are of Punjabi origin.

I'm not sure yet if I'm motivated enough to watch this, though!

Ooooo Punjabi cinema! As a Punjabi gal, I cannot take Punjabi films because they are just soo bad but all the better for me to make fun of. This one i watched a while ago on TV, and i was struck by how lanky and skinny Om Puri is in this, and how he seems to be in all the films I've seen! Perhaps you should see Chann Pardesi which is also a semi good Punjaban film~

I love Gurdas Mann! He used to be part of so many fun programs on Indian TV in my childhood, that I am kind of indoctrinated into liking his silly songs. And I love watching Punjabi films, too. They arent great but I enjoy hearing the dialogues in Punjabi - they sound like Hindi words chewed over and then spit out with great emphasis! As to Raj Babbar, I kind of like him in Punjabi, but otherwise he always reminds me of his role in Insaaf Ka Tarazu (even though I've never seen the film).

I liked Chann Pardesi, and its songs.

I love lots of things related to Punjab and Punjabis - their language (they sound like Hindi words chewed over and then spit out with great emphasis ROTFL!!!!), their food, their lively nature, level of enthusiasm, the peppy beats in their songs, Bhangra and the green fields and colorful attires...but inspite of it I haven't watched any Punjabi movies yet...and to try out a movie from the 80's I need lots of courage and patience!
Raj Babbar is good actor...but no matter how good his role is and how well he has performed, I can never bring myself to liking him - all thanks to Insaaf Ka Taraazu

Wow! Thanks for the review! I was asking on Twitter and Facebook about Punjabi recommendations before too.

@ Dusted off A big part of the enjoyment was mostly the novelty factor plus it seemed so much like a typical bollywood film of the 80's. Indeed Punjabi films back then weren't on par with bollywood they only used to make between 8-10 films in a year

@ Thanks Rum i shall check it out too, Om Puri was indeed very skinny in this

@ Bollyviewer you're funny, Lol at chewed up and spat over Hindi words. I can see why anyone would hate Raj for his role in Insaf ka Tarazu, he was really freaky and he played it with so much conviction but alas he's an actor he had to do his job, i remember hating him a bit for that role too

@ Thanks for the recommendations Avdi i'll look out for Chann Pardesi

@ Sunehriyaadein I myself seem to have that view of Punjabs as them being like you've described, i hope its not me stereotyping though. wow looks like Raj really annoyed a lot of people with his role in Insaf ka tarazu

after hearing it constantly on BBC Asian network. I wonder what the song means. I need to look for a translation. Now I want to see this movie. I have only see part of a Punjabi movie once. This seems like it would be a sensible place to start. Thanks for the write up.

@ bollywoodfoodclub Thanks for that link, i've been looking for it on youtube, unfortunately the DEI dvd of Long da Lishkara didn't come with subtitles for the songs, i wonder what it means too, let me know when you find out. But it was still a nice watch, it would have been better if the songs were subtitled though

I love this movie. My all time favorite. I love the dialogs. ive watched tihs movie so many times and its always like iam watichin it for the first time.

I have been looking for a high resolution print of this movie online. all I can find is 480p. Help out a brother please

Can anyone tell me what the name of the sikh spiritual song that is being played in the Movie. the scene is that of 2 women in the sikh temple .