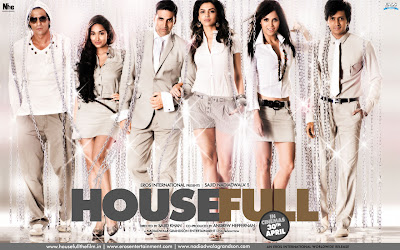 When a film starts off being dedicated to the likes of Manmohan Desai (Amar Akbar Anthony, Dharam Veer), Brij (Yakeen, Yeh raat Phir Na Aayegi)Prakash Mehra (Zanjeer, Muqqadar ka Sikandar, Sharaabi) Feroz Khan (Qurbani, Dharmatma) K. Raghavendra Rao (Tohfa, Himmatwala) you instantly know you're in for some solid classic suspension of belief moments. However, Sajid Khan 's Housefull lacks the distinctive style of the aforementioned producers, but it's a watchable fluffy slapstick comedy
Brief Synopsis
Aayush (Akshay Kumar) is a "loser" whose bad luck follows him all about, he believes his bad luck will end when he meets his true love. In a bid to gain some good luck he returns to London to meet his best friend Bob (Ritesh Deshmukh) whom he claims brings him luck. While in London he's set up with Devika (Jiah Khan) the daughter of Bob's boss (Randhir Kapoor), they get married under his blessings as he approves of Aarush being a traditional Indian boy. Following their marriage they honeymoon in Italy, where Devika reveals she's in love with a White guy named Barry, she had only married Aarush to save face with her father, she cuts a deal with him offering to pay him lots of money if he consummates their marriage, Aarush agrees and then meets another woman Sandy (Deepika Padukone). Will she be the true love that'll bring an end to his bad luck?
Classic leave your brains at home fluff, do not look for logic in this film, nitpickers will have a lot to pick on, like teenagers in the streets of London speaking in American accents, Canary Wharf tube station (which is in London) appearing in Macau (Asia)etc. The film succeeds as a slapstick comedy but the climax drags on a bit and felt rushed as few plot elements weren't concluded the way i would have liked
Performance wise, everyone was on hamming mode (in a charming way) with the exception of say Arjun Rampal. Chunky Pandey as the Italian 'Aakri Pasta' with his "Mamma Mia' i'm only joking" line really made me laugh. I also really liked Jiah Khan, she's barely in the movie as much as i would have liked her to, but she's impressive.
Now unto something that has been getting this film criticism, there's a scene which involves a black baby (i actually felt this was a bit of a social commentary on colorism, as Boman Irani later notes that what matters is the heart, as such i feel the film redeems itself ) what i found annoying was the way Akshay's character explains his African roots, by breaking out in a stereotypical African Jig and tribal type noises, I found this scene unnecessary & i hope bollywood directors realise their films are becoming ever more popular now, all these racial stereotypes & jokes are so unnecessary.
All in all a silly slapstick comedy with some truly whacky moments like Akshay getting slapped numerously by a monkey & numerous Gay innuendos. If you like loud, jumbled, slapstick comedy then check this out.
Good commercial soundtrack by Shankar-Ehsaan-Loy my favourite of all the tracks is the hilariously sexy 'I don't know what to do'
I'd give Housefull 6/10
For a full list of movies that Housefull borrowed from, check out Bobby talks cinema post here
Posted by bollywooddeewana at 07:58

Well you and filmi girl have sold me on this film, and I really hate it when Bollywood films mess with African steretypes it makes the whole product iffy to me!

Indeed Rum it just seems so lazy and outdated, its like get on with the times.Asides from that its an enjoyable escapist flick

Sita-ji and I were discussing this on Twitter. The only reason I would watch this film is for Arjun, but I'm sad he's been playing supporting roles now :( I will wait for dvd though

I think I'll wait for this to be shown on TV (most Hindi films start appearing on TV a few months after they're released, and then you can - if you so wish - watch them about a dozen times a week).
My brother-in-law had seen the trailer of this and said he wanted to see it because it looked so utterly trashy! Yes, no accounting for tastes...

I somehow never felt like seeing it and on Friday evening half of my friends on facebook had their status set to : "Housefull is a total disaster". So, that was enuf of a warning ;-)
I wanted to watch Chase instead, really wanted to see Aditya Raj Kapoor in action but it wasn't running in any theatres near by.

Oh, I know this racist jokes, they always get on my nerves. They are so embarassing. You get a feeling they are undermining your intelligence!!!
I don't think I'll be watching this!
Thanks for the warning!

@ Nicki Do Nicki though in fairness i have to say all the films i've ever seen of him aren't one where he's in leading roles, but he was one of the only actors who wasn't hamming in this

@ Dustedoff knowing your taste in films, i think you should definitely not see this

@ Sunehri Its ok for a one time watch, but i don't know if i'd recommend it more than that

@ Harvey you're so right, Embarrassed is exactly how i felt, i enjoyed it in all but that said scene was so not needed

Classic leave your brains at home fluff, do not look for logic in this film, nitpickers will have a lot to pick on, like teenagers in the streets of London speaking in American accents, buy designer lawn online , lawn online shopping 2016 Canary Wharf tube station (which is in London) appearing in Macau (Asia)etc. The film succeeds as a slapstick comedy but the climax drags on a bit and felt rushed as few plot elements weren't concluded the way i would have liked