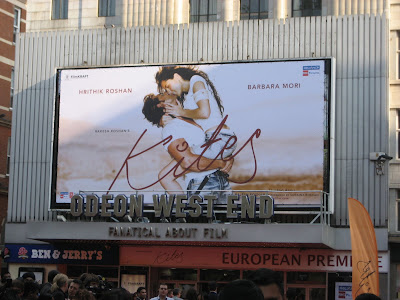 Ok so i always thought all competitions were lies, well that's because after over 15 or so years of entering more than i can count i never win anything, all that changed on Tuesday when i received a phone call saying i was one of the lucky winners picked to attend the London Premiere of kites, i really couldn't believe it, not only did I win tickets but i got front row seats as well, although i didn't get to meet Hrithik or the stars personally, he was feets across me for some minutes and i must say he looks exactly like he does in the movies, the camera ain't lying ladies and gents 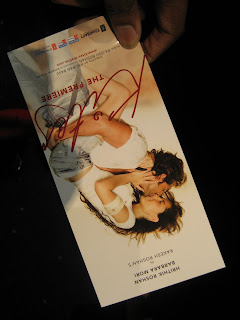 The No.1 Tickets in London on Tuesday 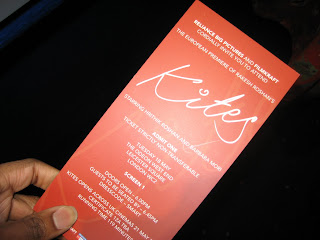 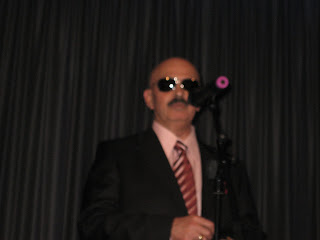 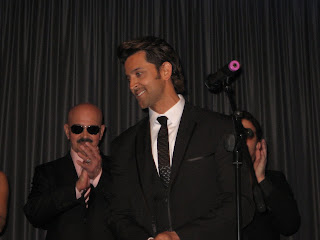 Hrithik was just how i imagined him to be 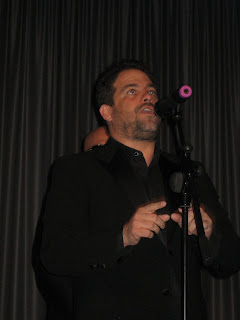 Bret Ratner who's edited the international version Kites: The Remix 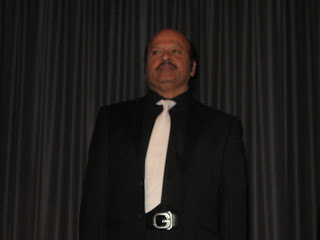 Rajesh Roshan (The music director) jokes on how the mic is a bit too tall for him
Brief Review of Kites
Kites follows the story of Jai (Hrithik Roshan) a struggling salsa instructor based in Las Vegas who gets married to illegal immigrants for money, he thinks he's hit the big time when he pretends to be in love with wealthy Gina (Kangana Ranaut). Gina introduses him to her father Kabir bedi who lets him know that whoever makes his girl cry would be in for it. He also meets her brother Tony & his fiancee Natasha (Barbara Mori) who happens to be the last illegal immigrant he had married t0 help get a green card. He starts falling in love with her, in fact they both fall for each other but subtlety is not a word for these two, Watch as their romance blossoms and gets them in trouble with Gina's family
What i liked about Kites
1. It felt like 22nd century masala with just the right mix of romance, thriller, action and comedy, it kept me engrossed and at the edge of my seat
2. The chemistry between Hrithik & Barabra was sizzling Hot, i think these two will be cast in yet another film
3. Hrithik shows what he' truly made of, its a one man show here and what a great actor he is plus there's a lot of extra skin show for all you ladies and some of you gents ;0) (If you're a fan no excuses for missing this movie). Great performance from Barbara as well, she's charming, funny and very likable as Natasha in fact everyone in this film is great
4. The songs by Rajesh Roshan, while not following the traditional lip sync accompanied by dance that i love in bollywood films were beautiful and suited the whole ambience of the movie my favourites are 'zindagi do pal ki' and 'dil kyun hai mera'
What i didn't like
Nothing too much apart from the fact that for a film that's going to introduce bollywood to the world i felt it missed the essence of what people expect from bollywood, yes i know its been tailored for an international audience but will people watch this and expect all bollywood films to follow this path, or owing to this films success if it does become a blockbuster will bollywood alter its ways?
I personally love all the things that make bollywood unwatchable for some i.e. the lip synced songs, dance sequences, melodrama etc. It remains to be seen then if this film will indeed bring in the money (internationally) as well as new fans. Anyway, go see this film, its entertaining & thrilling, had i spent £10 watching it at the movies, i wouldn't have regretted it.
Paisa Vasool Rating: 8/10
Posted by bollywooddeewana at 04:55

Wow! Congrats for winning the competition!!! Does your restored faith in competitions mean that you will participate more? :-D

Yours is the second good review (the Memsaab recommends it, too) of the film that I've seen in blogland. Of course, I was already sold on the film, long before it even released! But now? Hrithik playing a salsa teacher, Hrithik helping immigrants by marrying them? It might almost convince me to seek a green card, too!

Thanks bollyviewer it has indeed renewed my faith, i'm still a bit skeptical about some of them though.

LOL....On this side of the pond Men can marry and i'm sure if that were the case that Hrithik was helping out in real life, men and women would queue up without hesitating to do so :0)

O how I envy you and memsaab!
you got to be at the premiere of a movie and that to with Hrithik Roshan!
Envy you!
You are soooooooo lucky!
Thanks for your fotos!
Wish you more such luck! ;-)

You know how much I love Bollywood movies..but this was neither here nor there...it was, imo, utterly rubbish.

And oh congrats on the awesome win :)

Thanks Harvey, it really was a lovely experience, i'm not one to stalk stars or even keen on meeting them, but this was tres bien


@ Thanks Sujoy I 've read your post and i guess i just went with my feeling on this one, i feel you on it not being here or there though, but still i enjoyed the ride

Lol Avdi i enjoyed it, it was an amazing ride of thrills, romance and comedy, it entertained me. ah well i guess one man's food is another's poison

bollywooddeewana-ji!
I'm soooo happy you won! I did NOT win tickets to the US premier, which I entered, and had lost all faith in contests until reading your experience. ;) These tickets couldn't have gone to a more worthy person. Thanks for sharing and all the best!
Sita-ji

@ bollywoodfoodclub Thanks a lot,i hope the spell of good luck continues on my side and i hope you win a contest soon as well to reaffirm your faith in them :0)

Lucky you!!! And congratulations! I've never been a Hrithik fan, I guess it had to do the hype that was created when he was launched. So, I wasn't very keen on watching the film, but still an invitation to the premier and watching it with all the people involved in it would have definitely been an experience.

Thanks Sunehri i can understand not liking someone due to much fuss, i can definitely relate to that. I wasn't a bollywood fan when he was launched so i can't really understand it but i have to say he made a big impression on me when i saw him in Kaho naa pyaar hai, usually for most films i stop midway and continue the next day but that was one film i watched all the way through at once

Wow! Congrats on the win!! I've met Hrithik too, in person and this was back in Delhi when he was there for the shooting of Yaadien... I was in school then... he looked hawt... would louv to put [read: show off :) ]the pics on my blog...

Coming to Kites, I guess it was a victim of all the publicity pre-release... I liked it bits and parts...

I liked it in** bits and parts!

@ Mansi Cool, it was totally enjoyable though i think the lack of indianness to it hurt it

I thought this movie was amazing!!

I'm always shocked when some people say it's rubbish O_o
I'm pretty sure these people say this because the film was not what they expected, it was not made in the typical Bollywood way, or on the other hand because they don't like Bollywood and therefore didn't like this film labeled as such.

But seriously, the film has amazing qualities like direction, editing, cinematography... all 3 = amazingly good. A great technique. Good actors. Barbara Mori, whom I already knew from the telenovela Rubi, was wonderful, and I'm really happy she got to prove her talents. The narrative process was well done, the screenplay was original, there was humour (parodic scenes, etc.).

This CANNOT be taken away, even if someone didn't find the movie to their taste.

Before people think I'm biased, let me say I enjoyed the movie a lot, though I don't plan on buying the dvd or re watching it soon. I just recognized its qualities.

How can someone not see the technical qualities there amazes me.

By the way Bollywooddeewana, congrats for your prize :D

@ Taty i enjoyed this film too but as you said i expect it felt below people's expectations and as hrithik is such a good dancer I wonder why there wasn't lots of song and dance after all that's a big part of bollywood for lots of people, that being said though I enjoyed this film