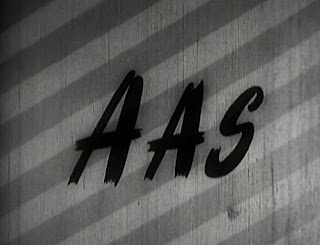 Given the obsession of many bollywood films with Saas bahu (Mother in law daughter in law) relationships, the last big saas-bahu movie i can recall was Beta, but way before Beta there was the 1963 Mala Sinha/Guru Dutt starrer 'Bahurani', Reena Roy's 'Sau Din saas ke' (which i can't wait to watch) and Hema Malini's 'Jyoti' and more particularly mega Indian soap Opera's like kahani Ghar Ghar Ki, Kyun kii saas bhi kabhi bahu tii ( i just love the title of this one, how about a film version Ekta) it translates as 'Because a mother in law was once a daughter in law too'. I've aways wondered what the obsession many Indians have towards saas bahu relationships, and for how long exactly it has been going, Aas made me realise, that this mother in law/daughter in law cinderella style stories have long been prevalent in Indian entertainment
Ashok (Shekhar) a widower loses his son and offers up a reward to whoever finds him, Asha finds him and returns him to the police station where they both meet, he offers her the reward but Asha turns it down refusing to put a price on human life (very sweet of Asha ain't it) 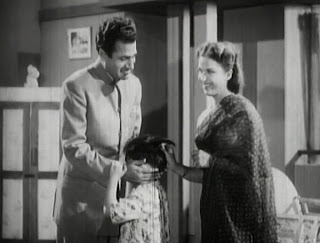 When his son Kishore (Ramesh Kapoor) is in need of a governess, Asha applies and gets the job, Kishore takes a strong liking to her and not before long Ashok too falls for Asha's gentle nature and beauty too of course 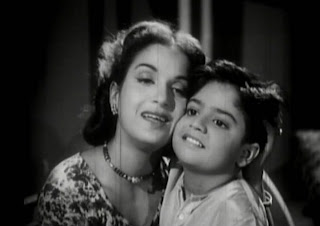 But as we all know all can't be fair in love, trouble arises when Chacha-ji (Laxmibai) Ashok's guraidan since childhood who wants him to marry her own niece disapproves of Asha, bringing into question her class and family background 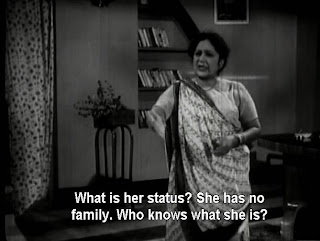 Chacha-ji pushes her agenda but Ashok stands his ground, he and Asha marry and not long Asha gives birth to Baby Munna 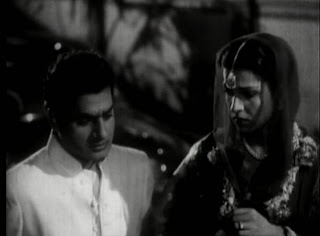 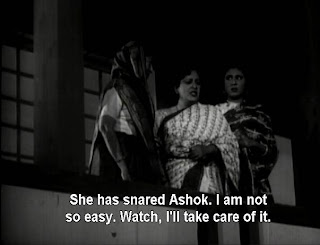 Plot No.1: Prior to a Pooja (prayer/ Religious ceremony) for Kishore, Asha is entrusted with a necklace to be used in the ceremony, Chachi goes on the sly and steals the said necklace, on the day of the ceremony when Asha is unable to find it, Ashok scolds her blaming her for being so irresponsible 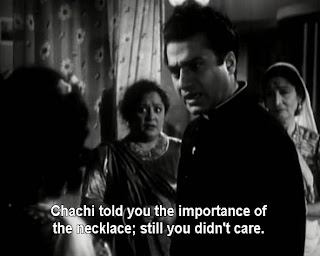 Ashok forgives her but Chachi and her aide the housemaid Chand ( Chandabai) start conniving again, she starts messing with Ashok's head telling him all sorts of lies about Asha, still all this fails to have an effect 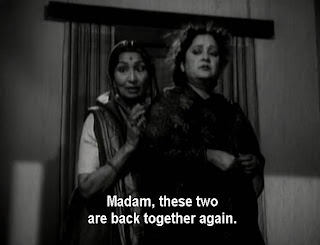 Chachi's Master Plan
She later comes up with a master plan to get Asha out of the mansion for good, she mixes poison into milk drink Asha intends serving to Kishore. Chacha-ji knocks it over just in time before Kishore can eat, the pet cat laps up the milk and dies 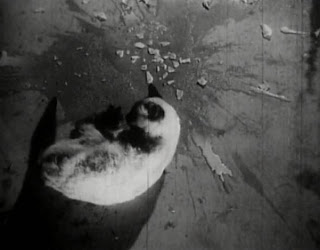 ahhh poor cat :0(
they convince Ashok that Asha is out to kill Kishore so that her child Munna would be the sole inheritor of Ashok's fortune, thus Asha is sent packing 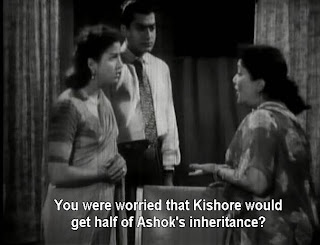 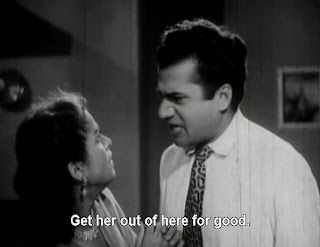 Lost and confused, Asha's spirit are revitalised when Masterji (Om Prakash)comes to her rescue and urges her to fight for what is hers, thus Asha goes back to the mansion in disguise with the intention of getting Shekhar to realise the truth 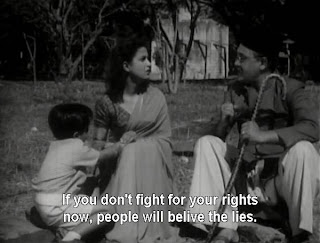 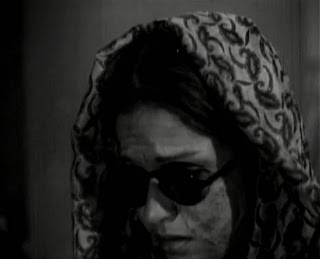 Will she succeed or will her disguise be exposed, watch Aas to find out
Overall Aas is a sweet family melodrama, it started off a bit slow but once the story picks especially with the arrival of Chacha-ji as the evil mother in law, the film becomes gripping and though its somewhat predictable and soap opera-ish, there is a lot to enjoy. 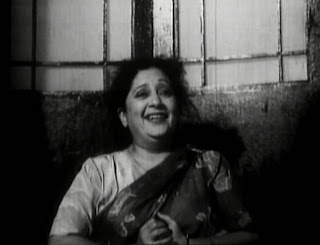 Performance wise Laxmi bai as Chacha-ji gets my praise, you just want to knock her over, her character was so conniving, rude and scarily real 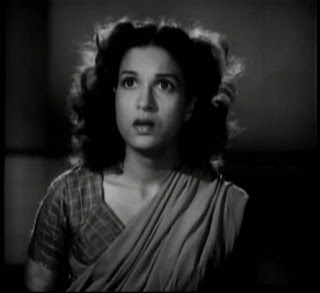 I also loved Kamini as Asha, she has a quietness in her acting style that i like, plus i find her really beautiful 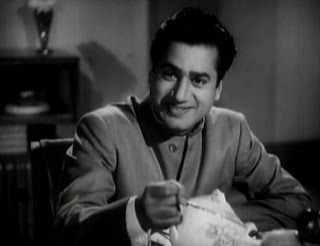 As for Shekhar i remember finding him a bit stiff but i guess that must be a requirement when you're playing the timid male figure whose Chachi still makes most decisions for
Excellent songs from Shankar Jaikishen added to the viewing experience, golden melodies like'Itna pyar karega kaun', 'zulm ki nagari mein' to the playful 'main to tere sapnon ki rani' which takes place in Kishore's wonderful costume themed birthday party with Om Prakash dressed up as what i believe is Hitler 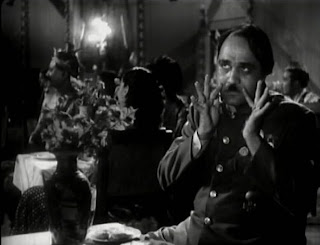 A Beta ver 1.0? ;-) With MUCH better songs! I am kind of fed up of saas-bahu sagas, so this will probably not show up on my to-watch list any time in the near future, but I'm so glad to discover Pyaar hoke raega. It's a lovely song!

Bollyviewer, I agree with you! Pyaar hoke rahega is a lovely song. But I've seen a fair number of saas-bahu films, most of them execrable at best (Chandan ka Palna and Ardhangini, for instance), so this is one plot element that doesn't appeal to me.

No stars, except for maybe Kamini Kaushal, I guess the drama is the only thing that might be entertaining in the film. And the Chachi of course, hain na?

Oh Gosh,this theme was repeated so often later.. the good stepmother forced to act like a bad one because of some jealous relative.

You should try Sau din Saas ke. There is a terrific sequence there between Nilu Phule, Lalita Pawar and a lizard.

Saas bhi Bahu thi was a fun flick too, in a way. Om Prakash and Shashikala dont talk to each other directly but talk to the servant, saying = Apni Malkin se keh do mujhe chai chahiye. That was fun.

@ bollyviewer I can imagine how much fed up you are, indeed one could term this as beta with much better songs but in fairness i loved the songs of Beta too

@ dustedoff Ardhangi is the Meena Kumari/Raj kuamr one right? I have it on my list and i'll watch it just for Meena

@ Sharmi Right on,Kamini and Om Prakash were the one's i recognised and the saas drama is what elevates this film from being boring

@ Avdi Thanks for those recommendations, you're the second person preaching the goodness of 'Sau din saas ke' to me, it'll surely be added on my next cart

Even I am fed up of the plot. Have watched enough tv serials and movies. But the songs in this are really nice. I too have Ardhangini pile dup somewhere but haven't been able to summon enough courage to watch it, inspite of Meena Kumari.

@ Sunehri I can imagine, Indian soaps all seem to have these saas bahu affairs in their plots, i imagine i would feel the same way if i lived in India perhaps, but as for me i still have a bit of an appetite for them