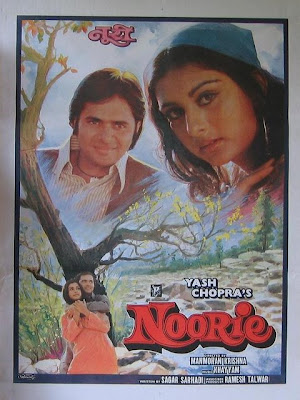 Noorie (1979) is a very cute, romantic film produced by Yash Chopra. Upon its release in 1979, the film became a box office hit in India (i have an obssession watching movies that were hits in India, of course i watch non hit films as well, but i like seeing what Indian cinema goers paid to watch)

Noorie tells the story of a girl called 'Noorie' ( a very cute Poonam Dhillon) who lives in the valleys with her Dad, and her dog Khairoo, she has a boyfriend Yusuf (Farooq Shaikh) and they're both deeply in Love with one another 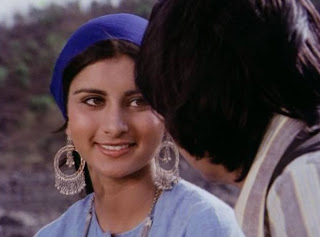 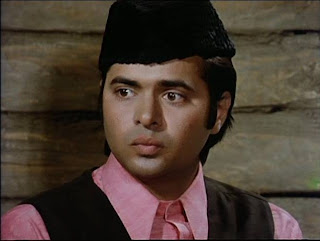 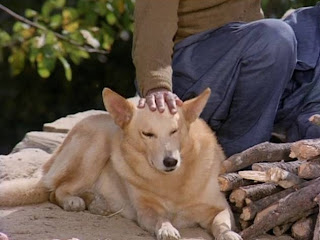 Yusuf is eager to marry her, but Noorie tells him to go and ask her father for her hand in marriage 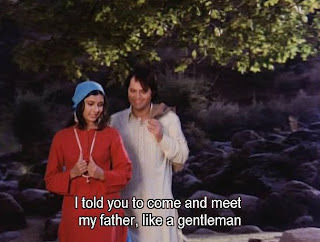 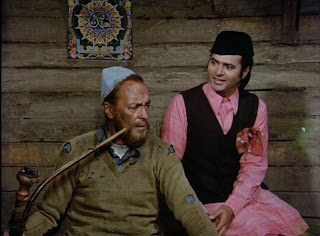 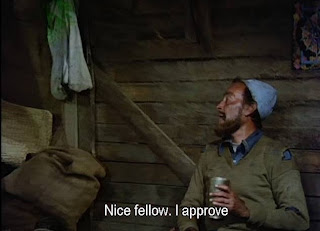 While preparation's are being made for Noorie and Yusuf's wedding , another villager Bashir Khan (Bharat Kapoor) takes a strong liking to Noorie and decides he wants her for himself, he approaches Noorie's father and tells him his intentiontions, but Noories' father disagrees 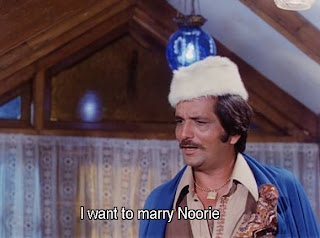 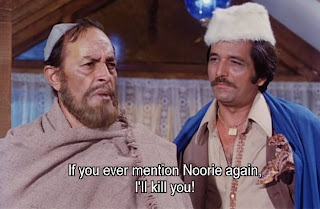 A very angry Bashir Khan then arranges the murder of Gulam Nabi, who gets killed by Bashir Khan's men. Following his death, Noorie and Yusuf decide to suspend their marriage, a few months later the marriage preparations are back on, however a few days before the marriage Bashir Khan, who happens to be Yusuf's boss sends him on an errand out of town. While Yusuf is out of town Bashir Khan goes over to Noorie's house and then rapes her. 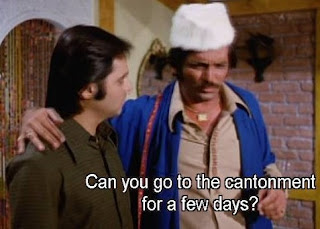 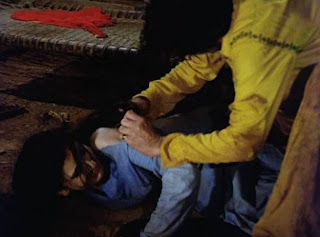 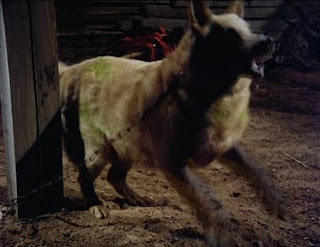 Noorie's dog tries to help but he's been chained down 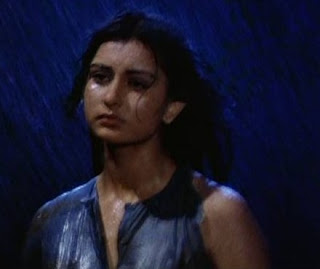 A very distraught Noorie after the rape
What will happen to Noorie, will she be able to leave with herself after the rape? What will be the Villager's reaction to Noorie? Will Yusuf still be willing to marry her? Will Bashir Khan's evil deeds ever be found out? For all these answers watch Noorie.

Closing in at about 1hr 54mins Noorie is one of the shortest hindi films i've ever seen. Its hard for me to criticise Noorie, as it's a simple, sweet & straight to the point story, although it gets all sad and dramatic towards the end. If you like lighthearted, simple entertainment that's easy to follow, and one has great songs that you'll find yourself singing even after the movie is over, then definitely check out Noorie.
The songs of 'Noorie' scored by Khayyam (who also scored bollywood classics such as Kabhie Kabhie,Umrao Jaan) are memorable classics that linger in your head upon listening, from the delightful Qawalli 'Aashiqi ho to aisa ho' (the only video of this song i could find on youtube were of some Russian bollywood dancers miming & dancing to it at some function, make sure you watch it), the sweet 'Chori Chori koi aaye' and my personal favourite the haunting 'Aaja Re' (see below). The simple storyline, the character's, plus wonderful cinematography, the beautiful locales and classic music is what i believe made Noorie a box office hit in India.

Posted by bollywooddeewana at 18:55

Wow, I've never seen this movie. Looks good! Thanks! I think I will find it since it also has Poonam Dhillon.

I'm sure you'll like it, i see lots of Poonam reviews on your blog and you seem to be a big fan + Noorie is a cute movie, a bit sad but yet cute

I haven't seen the film but that title song (Aaja Re) is immortal!

By the way, Farooq Shaikh is a brilliant actor! Thanks for the write-up..I might give this film a watch sometime.

You're welcome Bhargav, the songs were literally in my head after just one listen.

Thanks so much for the lovely comments you left on my blog! It is SO cool to find another Nigerian blogger who loves Bollywood... I enjoyed reading this review... 'Noorie' looks really interesting - your screencaps are beautiful - Poonam looks adorable... I am definitely going to put this movie on my wishlist.

You're welcome daddy's girl, your blog was among my inspirations for starting mine as well. The first time i came upon your blog, i was blown away by your Analysis on Sooraj Barjatya, who also happens to be one of my fave directors.

And yeah, Noorie is such a cute movie, do check it out, it's light fluffy entertainment.

I looove Farooq Shaikh and Poonam Dhillon but hate Yash Chopra's "romantic" movies (they always have some flaw that totally kills the romance for me). This one had lovely songs but from the song picturisations I had the feeling that it would turn out like Bimal Roy's Madhumati i.e., Poonam's character would commit suicide because of her "dishonor"! Not my favorite kind of romance. Guess I'll just content myself with the lovely screencaps and songs on youtube (unless you can tell me that Poonam does NOT die)!

Lol bollyviewer i don't want to spoil it for you, i understand many people might watch it and think hmmm whats this, but i found it so simple and easy to follow plus the songs were in my head after just one listen

hi
this is raj, thanks for this song
i like this song very much
can u told me from were i can download this song in 3gp format or
can u send me at my email at coolraj16@gmail.com
it will great pleasur of yours
thanks

Hello Raj thanks for stopping by, i'm not sure where you can get the song in 3gp format but Music from the Third floor's post on Noorie might be a major help to you, follow the link below to see it

The ending of the film was a bit too tepid and lacked twists and turns. But Poonam was very cute and Khairoo was awesome :)

I agree on that, yes it lacked twists but not a bad watch on a rainy saturday afternoon and indeed i really should have given Khairoo more praise/credit

Watched this film when I was a little kid in the 80's and it has haunted me ever since because it was so sad - I need to watch this again, the suicide scene is still with me to this day over 25 years on. Top film. No Hollywood ever stayed with me the way old Bollywood films do - its all about emotion.

@ Anonymous thanks for your lovely comment, bollywood films do indeed have an emotion other film industries can't replicate