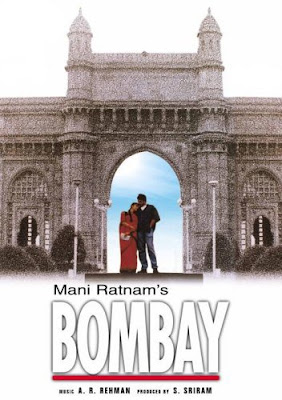 Bombay is a 1995 tamil film dubbed later dubbed in Hindi, as such i can claim its perhaps my first Tamil film. The film garnered lots of critical acclaim and won several awards including the Filmfare Best Critics film award


Shekhar (Arvind Swamy) returns home from Bombay to his hometown, upon his arrival he comes across Shaila Bano ( Manisha Koirala), Shekhar falls in love instantly 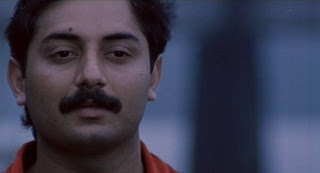 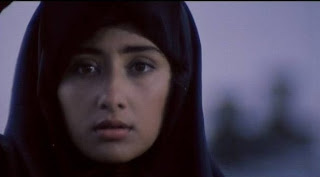 Shaila Bano is reluctant but she eventually falls for him, (now as we all know in Bollywood there has to be an obstacle in the path of the lovers, in this case Shaila Bano is Muslim and Shekhar is Hindu). Trouble arises when Shekhar goes to ask for Shaila Bano's hand for marriage, her parents threaten him and his parents make their discontent known as well 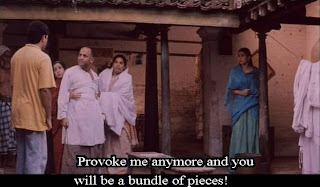 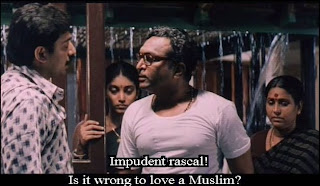 Shekhar returns to Bombay without Shaila Bano, but he keeps in touch with her through letters delivered to her secretly by her friend, eventually she escapes from her village and she joins Shekhar in Bombay, they eventually give birth to twins Kabir Natrayan and Kamal Basheer each bearing elements of their parents religions in their names 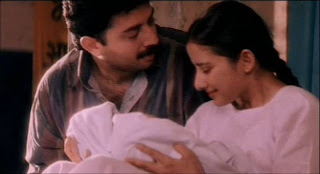 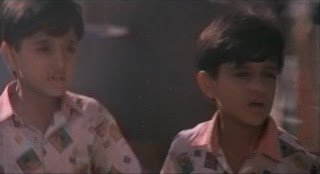 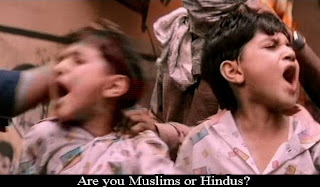 I really enjoyed Bombay and i have it down as one of my favourites, i love the chemisrty between Manisha and Arvind, and i really like the way their romance was balanced with the political commentary of the film. Religious intolerance is something i've heard of so many times and see on the news, but in Bombay particularly the scene captured in the last screen cap above really brought home to me the harshness and reality of religious differences.

The cinematography is excellent and the riot scenes are outstanding, i found myself clenching my sofa seats, it felt as if i was right there in the midst of the chaos. At the heart of Bombay's message is peace and unity regardless of our religious background, while its a great message the cynic/pessimist side of me thinks this is an impossible feat as we live in a fallen world. However applause to Mani Ratnam for his effort and for adding his dimension on the issue of religious divide

The music of Bombay is one of my favourite soundtracks EVER and is my best A.R. Rahman work so FAR, (the background score from the movie has even been featured in the hollywood film 'Lord of war' and has been used in a number of foreign adverts and has been sampled by german band Lowenherz). The music ranges from the wonderful ballad Tu Hi Re, to the very poppy and dancey 'Humma' see below

to the heart melting Kehna hi kya, this song really makes me all warm and excited on my insides, the music of Bombay is utterly fabulous 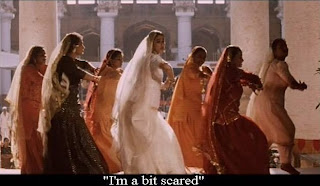 Manisha and the dancers in Kehna hi kya

Posted by bollywooddeewana at 08:51

This was my first outing of a southie. And as a kid, I was fascinated by visuals [and scared too, after intermission]. Loved each each bit of sound by love-Rahman. Thanks for putting songs. Enjoyed them. Especially 'Kehna Hi kya'-sufi recitation by Rahman is Divine.

It's been a while since I've seen this film. Definitely needs a re-watch. Thanks so much for reviewing it with awesome screen caps.

Bombay was the first movie I watched in a theatre! This one is very very special..not only because it was a first watch on the big screen but also because it was a mind-blowing first experience. I remember crying (a lot!) in this movie :D Love everything about it, the director, the songs, the acting and Manisha Koirala, who was my most favourite actress back then. Looking forward to watch her in RGV's Rann and Ratnam's Ravana. Good times ahead :)

I liked this film a lot when I saw it first. It was perhaps the first mainstream film to have a cross-religion romance and actually take a look at India's worst communal riots after 1947. A more recent watch however, left me a bit unsatisfied. Guess once the emotional impact wears off (1992 was a long time ago!) the film's defects begin to show up. Plus, there are so many better movies tackling the same subject matter, now.

The soundtrack though, is still one of my favorites.

@ Bhargav, i can't wait t see Manisha in Ravana as well, she was fantastic in Bombay and i've enjoyed all the performances i've seen of her so far, whenever i hear kehna hi kya, her face comes to mind

@Bollyviewer, i know the film had a few defects and no film can be perfect, i saw it a couple of months ago for the first time and i really like the the mix of the political/romance it had to offer plus the music had a big effect on me

I've yet to see, but heard wonderful things so it's on my list. A R is usually amazing anyway, so I'm really looking forward to the music.

I haven't brought myself to see this. 1992 is far off in the distance now, but I'm still not sure I'd want to see it. I know, I know, maybe I should simply try harder. :)

Hello, Nice walkthrough of this fine blog, and a great memory, that watching of Bombay! Thanks
yves

You're welcome Yves, Thanks for stopping by

I love the songs in this movie and i wanted to watch the movie in hindi but i can't seem to find it anywhere does anyone know a site for it and thx for the songs really nice.

Thanks for stopping by anonymous unfortunately i do not know anywhere that has it online, you might just have to get or rent it on Dvd

The Indian film industry has a huge fan base not only at home but also abroad, especially in countries which have a significant Indian population.