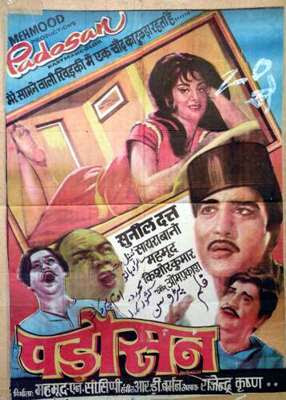 I had to bring my V. Shantaram week to an end as the notes i made on Geet Gaaya Pattharone (1965) made no sense, its one i feel i'll need to re-watch before i can do write up. Anyway moving on from V.Shantaram week, and just before i get my Rekhatober posts ready i thought i'd do a short post on one of my favourite movies Padosan (Neighbour) an adaptation of 'Pasher Bari' a bengali book by Arun Chowdhury, rumour has it that a remake is in the works with Sanjay Dutt and Katrina Kaif in the lead roles but in honesty i 'd prefer it if this film was left alone
Bhola (Sunil Dutt) decides he's comes of age at the ripe old age of 26, and decides his days of celibacy are over 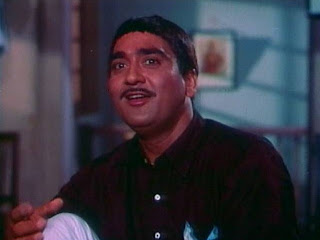 He meets and falls for a young, energetic lass Bindu, following his decision to move of of his uncle's house into his aunt's, he finds out that none other but Bindu his newly found love is his neighbour 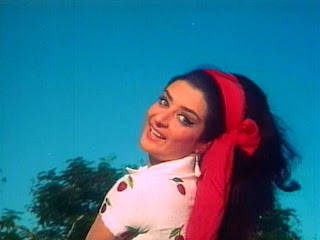 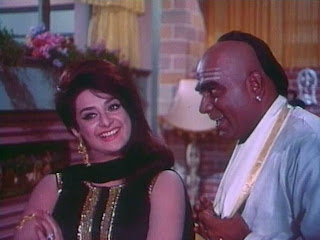 Not to be left behind, Bhola enlists the help of his Guru(Kishore Kumar) and other friends to help him in wooing Bindu. In a rather clever use of the filmi idea of playback singing which involves Guru singing while Bhola mouths the words, Bindu is in awe of his talent and falls for him 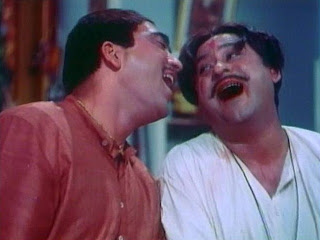 Now that Bindu seems to have fallen for Bhola, things take a turn when his fake singing act is outed 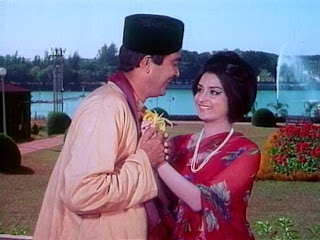 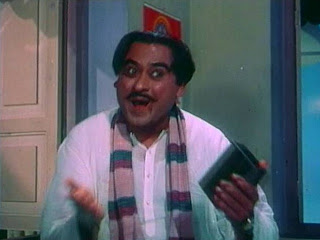 Overall i enjoyed this rather silly and over the top but undeniably fun comedy (depending on your sensibilities). For me the exaggerated facial expressions and histrionics of the characters of Kishore Kumar as Guru, as well as Sunil Dutt's 'Bhola' act kept me entertained and had me in stitches. 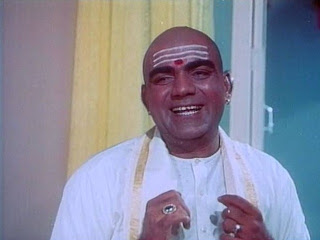 On a deeper level (if you so wish to delve that deep), filmi philosopher 'Philip Lutgendorf' notes on his write up of the movie that Mehmood's character as Pillai the Tamil Brahmin dance instructor "invokes every politically incorrect North Indian stereotype of southerners". As interesting an observation it sounds, I really couldn't take this on board as i'm not aware of what these perceived stereotypes are in the first place 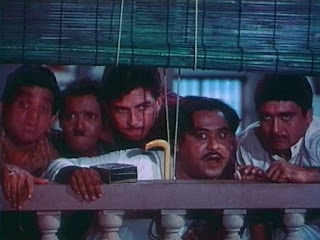 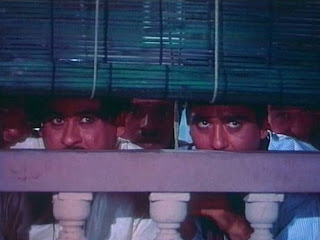 Performance wise everyone is on their fun, playful hammy best, i loved Sunil Dutt as always and Saira is really one of my favourite Bollywood diva's, i love how she was styled in this, in fact i always love Saira's style in all her movies 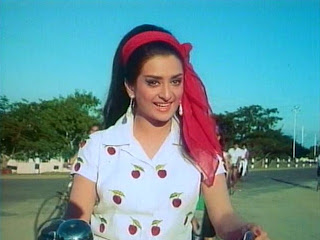 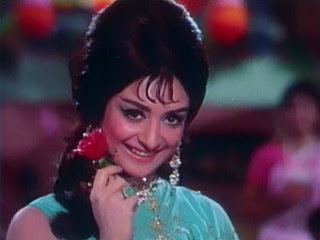 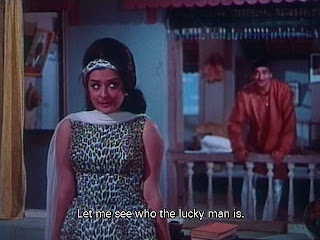 Leopard Print Salwar kameez with matching scarf,. she pulls it off so well 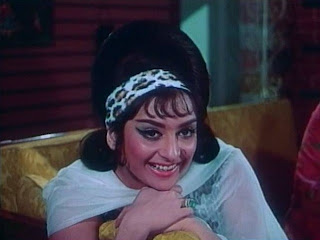 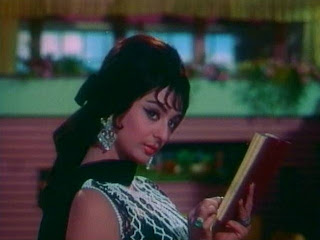 The songs by R.D. Burman made this film a favourite of mine and one i can watch over and over again, i can go on and on about them forver but my favourites are 'Mere samne waali khidiki' 'kehna hai', 'main chali main chali', love Manna Dey's lingering vocals on 'sanwariya sanwariya' the song i've chosen to embed is the flirty 'Bhai bathur', Lata sounds ever so lovely and i love the fun picturisation, this song pretty much sums up Saira Banu
So fab was the picturisation of 'Bhai Bathur' that The 1981 telugu adaptation of this story 'Pakkinti Ammayi' literally copies it frame by frame. Saira Banu wins hands down for me
Now head over and I can't wait to do so myself to My Movies Music and Mutterings blog for a write up of the soundtrack as well as to get the music for free, trust me this is a classic bollywood soundtrack album you don't want to miss getting your hands on
Paisa Vasool Rating: 7/10
Buy the dvd here
Posted by bollywooddeewana at 02:23

I've seen this once and love Sunil Dutt in it. Absolutely versatile :)

so glad u reviewed tis movie :)..am all smiles coz tis is 1 of my fav comedy movies of all time ;)..tu sach much ek "chatur naar" yaar :P

OOOH I love this movie sooo much. 'Mein Chali' is a blast of a song and 'Ek Chatur Nar' is hilarious! Just the other day I couldn't stop singing "Meri Pyari Bindu ... Meri Bindu re Bindu" hahaha.

Among the top bollywood comedies. That is a lovely write-up. I love 'kehna hai', it is soooo romantic.

Very nice review. Excellent RD soundtrack. Your dual posting with Veen has made me anxious to see this one again.:)

It isn't to write a review of Padosan since the movie is to be seen and felt especially with many situations involving a group of characters and a certain philosophy whether it pertains to leaving the outcome of marriage, etc., to the fate, or the right age of abandoning celibacy for a young man and entering into a marriage. Of course, there is a subtle dig at the North-South divide amply portrayed by Sunil Dutt and Mehmood.

What an interesting movie. A great watch any time any where!

@ Sharmi True, this was a very different role for him, he was lovely

@ the Bard I love it too

@ Amaluu Wow didn't realise so many people love Padosan this much, Ek chatur is indeed hilarious

@ Avdi Thanks, i just wanted to keep it short and sweet and yess igf i had to pick my top 3 songs from this 'kehna hai' would definitely make it

@ Mister Naidu Thanks, it is indeed one of RD's finest, so glad my movies shared her LP with us

@ Thanks Nasir, indeed there's a lot that can be written about Padosan, its a great comedy and i'm sure i'll find something new next time i'm watching it

Call Young woman in Bangalore Escorts Association. I am amazingly Hot and Hot alluring Brilliant Young lady and the considerable smiling young woman in Each one of the Five Star Lodgings and GuestHouse Organization in Bangalore living Accumulation Young woman and Punjabi-Housewife, Models Russian-Young woman self-rulingly in my cushions Close MG Road Bangalore. I am similarly prepared to come at your place Body to Body Back rub and Full Administration if you require me to ring me at whatever point Madhuridesai its My Name.

Our Magazine with interesting facts
Independent Escorts in Baroda

HI Guys, This is Rishab. I'm one of the best escort service provider in Bangalore, If you are looking for some exotic service in Bangalore then you have landed in correct place. If you have cheated with other Escort agency then all you need to do one thing, Just have service with us once and trust me you will get some amazing service with real Girls. NO CHEAT NO FRAUDS. You are just 1 call away from some amazing life time experience.

Free classifieds in india - Schloka. Post Free ads For Al over Cities of inida with Escorts And Call Girls category.
Escorts in Jodhpur
Escorts in Kota
Escorts in Kumbhalgarh
Escorts in Mount Abu
Escorts in Ganganagar

If you are available at Goa Call Girls, Goa with high class call girls 5 star hotel photos contact us, you can book Top Model Independent Escorts in Goa.escort in goa

Are you looking for escort service and you are in Gurugram? Well we have a five star hotel facility and better sexy girls and we provide the lowest rate of convenience. Female Escort Service in Gugaon

Gurgaon is a famous place for receiving gurgaon call girls. Here call girls are categorized as many categories, you can contact us on our website to get them. Russian Call Girls In Gurgaon