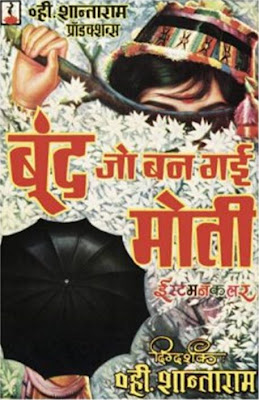 Apologies for my long absence, its great to be back and i really have to say i missed bolly blogging, Its been a while and i'm so eager to round off on the last two V.Shantaram movies i'm yet to review. Boond Jo Ban Gayee Moti (The drop that turned into a pearl) gave Mumtaz her first leading role in mainstream cinema after a whole string of B movies and supporting roles in many other productions
Our story starts with a man being taunted for wasting his years being a teacher, this results in a flashback
Before the death of his parents Satya Prakash (Jeetendra) is given the responsibility of caring for Mahesh his chota bhai (little brother), as such his brother's education and such other responsibilities lie on him 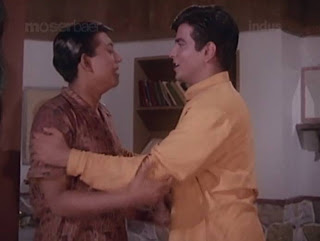 He manages to send Mahesh to Delhi for college, while he gets a job at the local governmnet run school 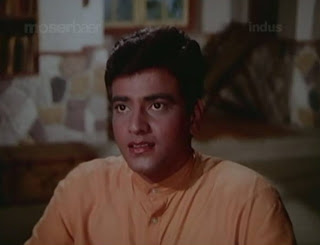 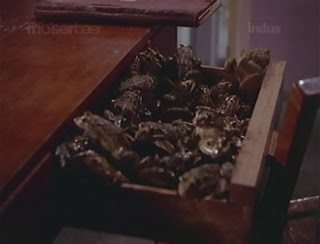 on his first day in a rather squirmy scene his students pack his drawer full of frogs (eurrgghh!!)
Village belle Shefali (Mumtaz) takes a liking to Satya Prakash due to his gentle and hardworking ethic, but then drama enters her life when her mother (Lalita Pawar) who had left since childhood following a marriage to Christan man (perhaps a missionary) attempts to rebuild a relationship with her 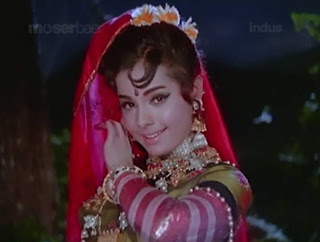 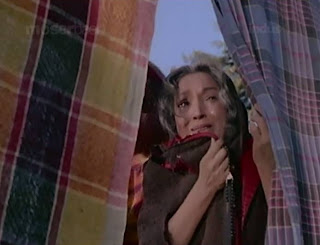 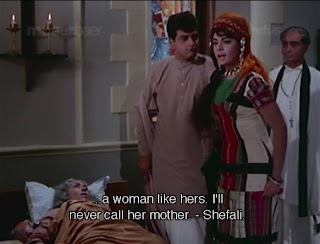 While Satya is sacrificing a lot for the sake of his brother's education, rather than studying, Mahesh is living a partying lifestyle with girls, drinks, smoking etc. 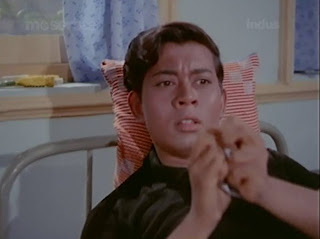 Satya however is focused on his career as a teacher and sets upon putting theory into practice for the students, the headmaster opposes his teaching style which results in Satya getting the sack. He later gets the job back when they realise how much the students have improved or shall I say how smart they've become 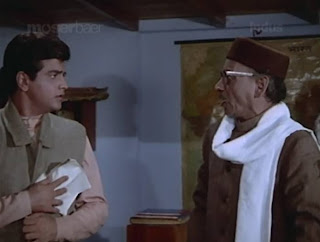 Meanwhile Mahesh falls for wealthy Renuka, this love affair makes Mahesh even more estranged from his studies, which culminates in him not showing up for his final year exams, thus not only as he wasted his brother's precious efforts to educate him, but he also fails his finals 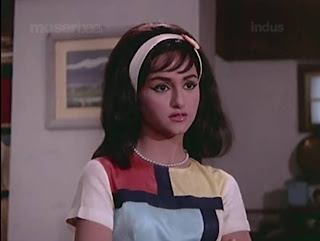 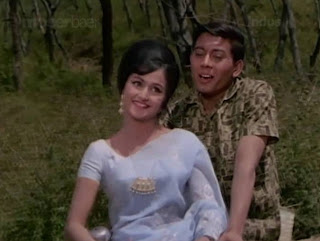 Rather than come clean to his brother, he steals a friends examination number and passes it onto his brother as his, an oblivious Satya is thankful and proud of his little brother 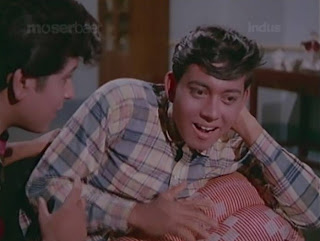 but then the story takes a major turn when Renuka who is Mahesh's girlfriend gets pregnant, she is later discovered dead, all evidences place Satya Prakash as responsible thereby leading him to be linked to the crime 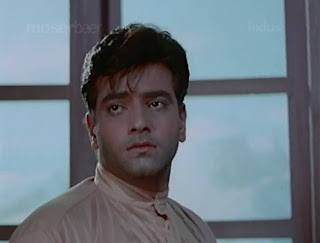 Will he be proven Innocent? Who really killed Renuka? Will mahesh come clean about his dodgy ways to his brother?
Compared to some of the other V.Shantaram films i've reviewed on here Boond Jo Ban Gayee Moti (The drop that turned into a pearl) is a lot more restrained and devoid of the usual showmanship one associates with V.Shantram.
At the heart of the film is its exaltation and respectability of the profesion of teaching hence the name 'the drop that turned into a pearl' perhaps a metaphor for the work of a teacher being responsible for the drop turning into a pearl. The film also advocates the need of practical rather than just theoretical education. Though this are the fine points of the film some things like the comical court scene, (why does a court scene, well in some if not most Hindi movies, seem to be a place for high hysterics and drama, as implausible as they seemed in this, i have to admit they were quite funny). 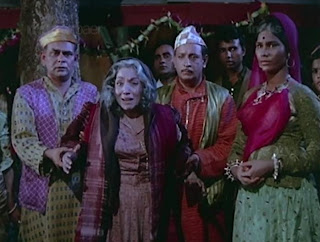 I would have liked more insight into why Shefali's mother left her and the vilagers, or the reason for the villagers reaction to her conversion to christianity, this made the film have or should i say gave out a bit of an anti-christian vibe. 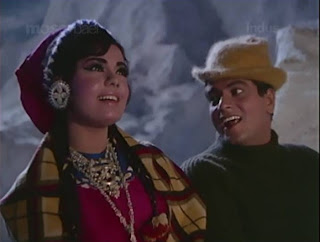 Performance wise everyone gives a restrained performance here and Mumtaz is lovable and confident in her debut leading role. Jeetendra was lovable and there was none of his Jumping Jack behaviours on here, a rather mature performance i must say. The supporting characters Akashdeep who played Mahesh and Vaishali who Renuka were lovable too
Lovely lovely songs by Satish Bhatia, according to imdb this is his only film score, there's the lovely 'Hum maine bhi' a wonderful song on nature 'Yeh kaun chitrakaar' but my two favourites are 'Meri zindagi ek khwab' all fans of campy song picturizations would love this, it features Mumtaz in everything from a fish inspired evening gown to a space rocket scientist

I saw this one when I was a kid, and remember very little of it - only the very basic storyline, and Yeh kaun chitrakaar hai, which is one of my favourite Mukesh songs. I'd forgotten that bit about the Mumtaz character's mother having run off with a Christian (though why his religion should be the defining factor is beyond me...): that does seem to smack of anti-Christian feeling. I wonder why? Was Shantaram a fanatic?

just like dustedoff saw this movie on DD years back and remember only the court scene and cannot remember the mother angle at all.
Shantaram anti-christian?
can't imagine. he was very secular, progressive and liberal. see padosi, duniya na mane and other films. but in his later films though one has a feeling that he has become (a bit) conservative.

Nope! not watched it....but got the whole picture from the wonderful review you gave....love all Jeetendra films...quite handsome & playful guy...but where can one get the original collection of these classic films...so many pirated copies outside.

I saw this movie a while back when I bought a collection of V. Shantaram movies. I found it a bit preachy, but you are right, there are no uber theatricals here.

@harvey: Yes, I didn't think so either; the impression one gets from most of his films is of a progressive thinker. So that is a bit puzzling...

Haven't seen this one but from your short review it is evident that Vinod Mehra's role in KHUDDAR as the younger and prodigal brother of Amitabh may be inspired from BOOND JO BAN GAYI MOTI, but for some sliht difference.

This movie was certainly not in the league of V.Shantaram productions. However, the team of Mumtaz and Jeetendra later spawned many a movie and proved very popular.

Regarding the alleged Christian bias, it was usual to show Christian characters in movies as free-birds or even bootleggers, (e.g. Parveen Babi as Mary in Khuddar; or even using the names in songs: MICHAEL KI DAARU JHATKA DETI HAI). Of course, movies such as BAATON BAATON MEIN do portray the characters in a respectable light as they solve their social problems.

Seriously why haven't I seen anything with Mumtaz? she is so adorable!!!

It seems a lot of bloggers kind of took the summer off. Too much to do, such little time. I'll join you in the effort to get back to it!

@ Dusted off Indeed i wonder too, i wish the film had delved more into this, i love 'Yeh kaun chitrakaar' too

@ Harvey I agree with you, based on interviews i've read on him but i have no diae why anti christian feelings in this weren't explained properly

@ Avdi seems we have the same collection it was refreshing to see this one as i was watching them in order consecutively.

@ Nasir Bahut Shukriya i knew i had seen that story somewhere but i couldn't remember, thanks for reminding me indeed you're right about the portrayal of Christians in Hindi films and yes Baton Baton mein was one that did so without adhering to stereotypes. i myself had weighed in a bit on the issue on my post on boot Polish
http://bollywooddeewana.blogspot.com/2009/08/boot-polish-1954.html

@ Indeed Shell, I've rarely been able to blog as much as i'd like, there was certainly something in the air this summer ;)

i've heard a lot about this film..so u recommend it right?

@ Sharmi Its not the worst V.Shantram film you'll watch,it all boils down to taste i guess, i had no reggrets about watching it so i guess i'd say yes if you can get it, as the songs are nice too

Thank you for sharing

Hi.... I stumbled upon your blog and was in for a pleasant surprise... I really like 'ye kaun chitrakar hai' but have not watched the movie yet and may I use ur blog post as a link in my blog post regarding this song ??