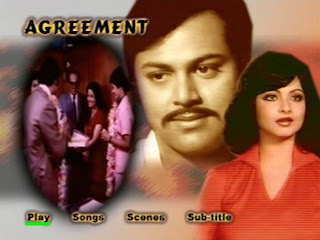 The first film in line for Rekhatober is Agreement, i had high hopes for this film but it somehow left me disappointed but since its a Rekha film i don't regret watching it although it could have been a lot more better
Mala (Rekha) returns back to India after studying business management in Germany to run her father's company 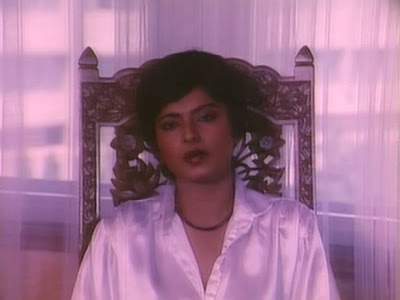 Mala is a hardworking and driven woman who's determined to keep her father's empire at the top, she also has modern attitudes like her belief that women should not treat men like Gods (now if you watch your bollywood, we all know her modern attitudes came as a result of living in Germany for years) 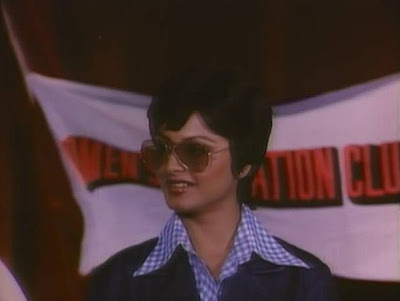 vah!vah! I really loved her rather butch style of dressing in this
When her Uncle Mr Mathur (Utpal Dutt) brings up the idea of Marriage to Mala, she proposes top do it her way by marrying a man who'll do all the things a traditional Indian wife usually does, her uncle assures her she won't find such a man in India but Mala insists she will and thus places an advert in the papers about her search for a domesticated husband 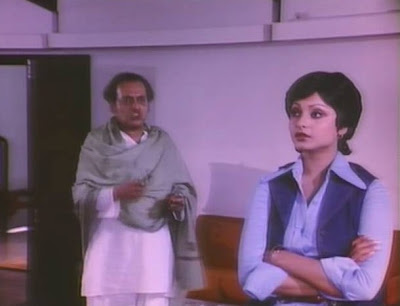 you tell him Girl
Fearing a man who's out to drain Mala of her riches will be chosen, her Uncle Mr Mathur outsmarts her and chooses Shekhar (Shailendra Singh) a struggling graduate for her 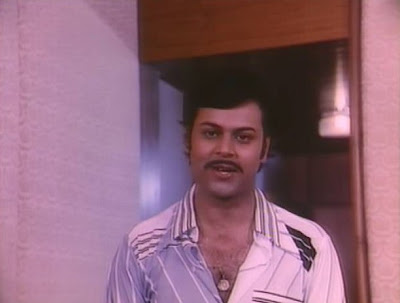 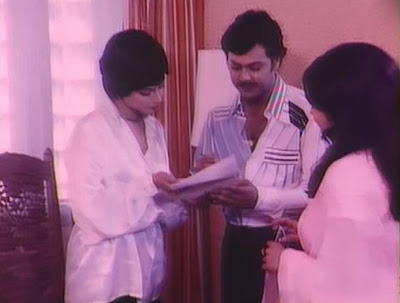 He agrees to Mala's contract, which reads like these Mala draws a clause of what her marriage partner must adhere to, they're are as follows and can only be terminated after a full year has passed 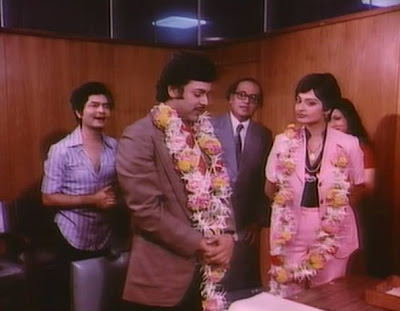 i love how she even wears a trouser suit to her wedding Atta girl!!
1. the marriage between her Shekhar is a fake marriage set up merely to deceive others
2. No Intimacy
3. The man must be devoted to his wife and do everything for her
4. He must entertain her guests
5. he must gain her permission if her requires to work outside
6. He would receive an allowance of Rs1,000 and 12 hours a week off
7. If he breaks any of the above, she can send him packing without notice
Shekhar agrees to the conditions, and soon finds Mala's ways unbearable 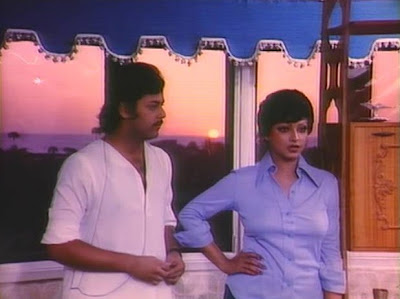 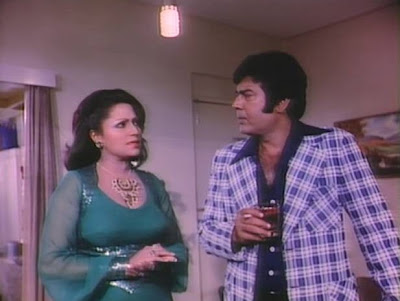 Will Shekhar hang on or will he quit? Will Mala's secret be exposed to all? Will she end up falling in love with Shekhar?
Now if you know your hindi films very well, you should very well know how all this would end, Mala ends up being the very model of womanhood she hated, at the beginning of the film and mostly through the first half Mala sports a short hairdo and wears western clothes by the end of it, she's become a Bharitya Naari (ideal Indian womanhood) 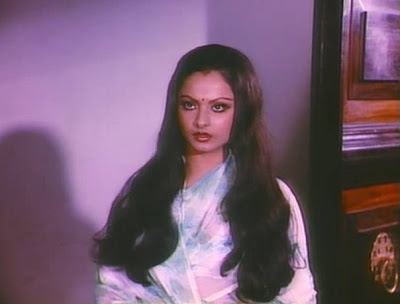 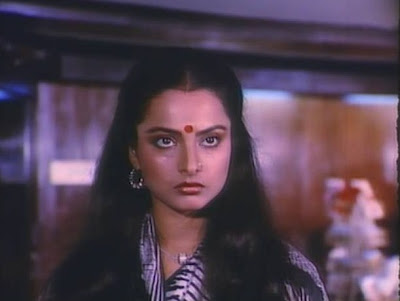 (i couldn't help but think of bollyviewer's Bharitya Naari list, it would have done her a lot of Good to read it, or wait maybe she did)
I was disappointed with this film, as it ended up being sexist, and if you're a feminist, you might want to avoid this film, as it would annoy the hell out of you. Given the premise of the story i was expecting the movie to be given a comedic touch but the whole thing just ended up being a cliche and very manipulative to make Mala realise the error of her ways and become the exact kind of Indian womanhood which she had so much being against. 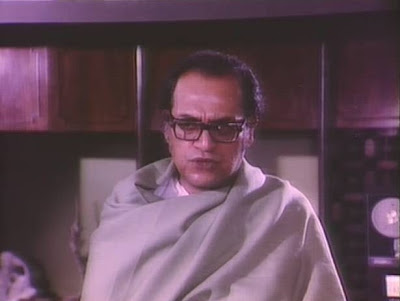 Acting wise everyone is ok but i found Utpal Dutt's smug uncle act, which he played convincingly well very unbearable 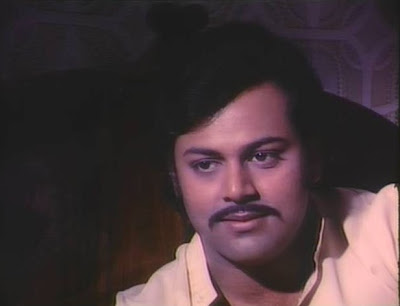 Shailendra Singh was a notable playback singer at the time played the role of Shekhar, he wasn't too bad as an actor but good thing he stuck to his playback singing 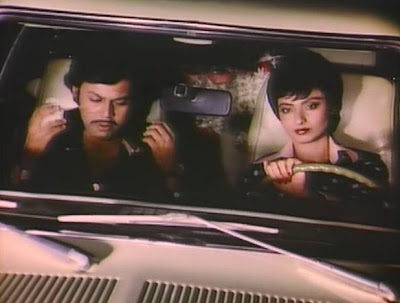 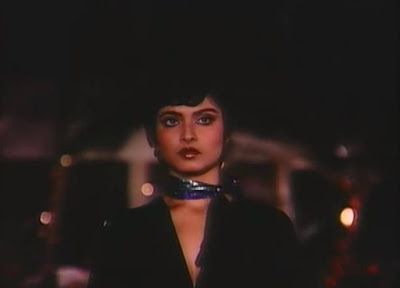 Now talking of my Diva Rekha i loved her in this film especially in the first half before she caught the love bug and became a Bharitya Naari, i have to say she rocked the hell out of that wig , it suited her to a T and such a gorgeous face too
The only good thing about this film i have to say are the songs by Bappi Lahiri, highlights are 'Suno baat pateki' 'apne pyar diya' my favourites are Jeena ye koi' a male version by Shailendra Singh and 'jaane kyun mujhe' a female Lata version which i've embedded below with English subtitles
Posted by bollywooddeewana at 20:39

I started watching this for Rekhatober, too, but found it too sexist to be bearable and could not finish it. I wonder why feminism and feminist ideas get caricatured so horribly in pop-culture. Their idea of a "modern" woman is an idiot Nazi! Though I must admit that I was quite delighted at the idea of a husband needing his wife's permission to leave the house or find a job! ;D

Wow, I never knew that was Shailendra - even though I remember having seen this actor's face elsewhere (I haven't seen Agreement, but maybe a song on one of those song programmes that used to be aired on TV...? Don't recall). Rekha looks gorgeous in that glam avatar, but from what both you and bollyviewer have to say, I think I'm going to give this a miss. Sounds very avoidable.

Yeah! she surely rocked in the short wig....i knew she would fall in love with him!...heheeehee. This film was done back in the era where women are to be seen but not heard. So i can overlook the sexist message. weldone. i enjoyed the review as if i watched it myself....waiting for more.

I had an opportunity to watch this movie at the New Empire Cinema where it was first released in Mumbai. After that, here I am reading the review!

As was rightly observed by you, the movie would have worked wonders if comedy were its main theme. It is here that MANCHALI beats AGREEMENT hollow. Those who have seen MANCHALI would agree with me since both Sanjeev Kumar and Leena Chandavarkar left a pleasant impression of the cinegoers.

I'm sure this subject was explored earlier in vintage movies, though I am unable to name one at the moment.

@ Dusted Off Avoidable is definitely the word, in not for Rekha i would have had no business with this movie

@ Thanks ;) You're so spot on and Gorgeous Rekha and the songs are the major pluses in this movie

@ Nasir Thanks for recommending Manchali, i'll check it out i've heard about it before plus i really love Leena so i'll check it out. i really can't recall any earlier movies too, but looks like its been experimented with a few times

LOLS- I had no idea that was Shalendra! I have seen this movie and hate it, owing to some feminist traits in me. Fun review!

@ Shweta thanks a lot, i hated it too but Rekha was fun in it well before she became a Bharitya Naari


But movie is damn boar, enjoyed the review more then the movie...nice one!