At first i thought this film would be a rip off of Rocky, but this bollywood boxing drama holds its own very well, with a very nice even if somewhat predictable story, the performances were great and its highly enjoyable

A day before the match Dharma has a stomach pain but he ignores it, on the big day Tiger punches him in the stomach and Dharma is rendered weak, Tiger wins the fight

As a result of losing the match he loses money, and all the promised favours plus the doctor tells him to quit boxing as any further matches will be hazardous to his health. As a result of all these calamities Dharma becomes a drunkard

His son Shankar (Mithun Chakraborty) starts stealing, Dharma also starts resenting his son for not wanting to follow in his footsteps by becoming a boxer

Shankar goes to Jail , upon coming out he promises his mother Savitri (Tanuja) he won't steal anymore, he also reunites with his girlfriend Rajni 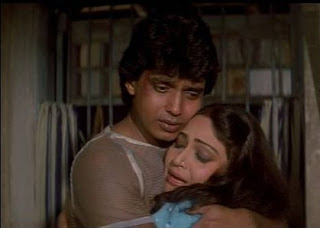 Following his release from Jail, Tony is on the hunt for a new boxer who would surpass Raghuraj's so he chooses Shankar whom he had met in Jail, although Shankar had turned him down at first when he falls on hard times he comes to Tony for 50,000 Rupees

The doctor tells him any more hits to the eye and he'll be blind, his wife Rajni makes him promise not to box again 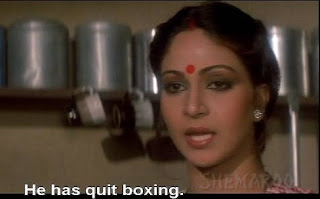 One day Shankar's younger brother Sonu gets injured and 2 lakhs is required to treat him, simultaneously a new boxng deal is offered to Shankar where he'll be able to earn 2 lakhs if he fights once more with Raghuraj

Will Shankar take up the opportunity? Will he risk going blind for boxing? Watch Boxer to find out

Overall i enjoyed watching Boxer, its an entertaining drama with all round great performances, even though a bit predictable in parts, it held my attention and in an era that was so replete with love stories here and there boxer is quite refreshing even though it had the atypical triumph through tragedy sports theme. The boxing scenes were well filmed and researched and it feels like you're watching an actual boxing match on Tv

I also loved Rati Agnihotri in these, i loved her style, she is one of my favourute beauties from '80's bollywood

I'm a big Mithun fan but unfortunately he isn't seen by many to be a great performer which i guess was down to his choice in cheesy commercial flicks like Disco Dancer, Dance Dance etc. i liked him here just as much, he wasn't over melodramatic

Great music too from R.D. Burman from the disco sounds of 'Dekho Idhar' to the sweet romantic sounds of 'tere dil mein kuch kuch' my favourite has to be 'Shaadmani' where we see a joyful exuberant Danny singing and dancing

Here's a nice list of sports related bollywood movies
Posted by bollywooddeewana at 06:41

I can't believe I've never seen this film! I like both Mithun and Rati.

I'll have to put it on my next shopping spree

Like Nicki, I can't believe I haven't seen this film - I can't believe I've not even heard of it! (Though I do remember Shaadamaani - it was quite a hit when I was a kid). Sounds like an unusual film: perhaps in some parts like Dil bhi tera hum bhi tere, in which Dharmendra is trained to be a bozer and though he refuses to fight after his girlfriend `dies' in an accident, he ends up having to fight for the prize money, which he needs to save the life of an injured child...

@ dusted off i didn't know what to expect at first, but i really like this film i guess its similar to 'Dil bhi tera hum bhi tere' in exactly the same scenarios you pointed out, i reckon you might like it

This movie was produced by Mithun & a lot of effort was put by him & his friend"Danny" in this movie..Had read that he promised him & gifted him with a merc..after the movie was a success..I remember that this was an average success in spite of some great performances,boxing scenes & R.D's music...

Thanks for stopping by Ramesh, thanks for that additional info. Its not a surprise the movie went with an average response, lots of good movies suffered the same fate for some reason in the 80's