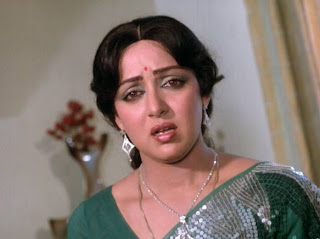 Continuing the Dharema theme is this rather significant movie, significant not so much because of its content but because it was the last film the great hindi film playback singer Mohammed Rafi recorded   for before his death in 1980

Thus the movie starts with this dedication 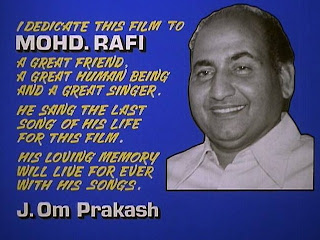 Then we're introduced to Arun (Dharmendra) who's just been released from Prison, the story goes on a flashback mode where Arun a wealthy and outgoing  young man meets and falls in love with a theatre actress Seema (Hema Malini) 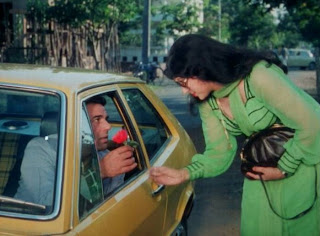 When Arun announces his plans to marry Seema, his Mother (Nirupa Roy) is none too pleased her son is getting married to a theatre dancer but Arun persists 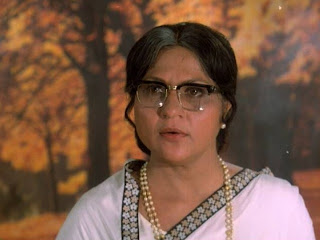 Arun is later called to herald the family business, however Prem (Prem Chopra) his brother in law is none too pleased and sets about killing him off by planting a bomb in his plane 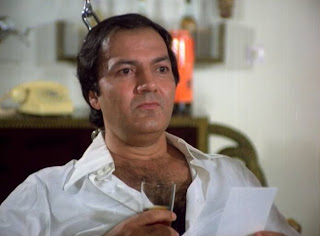 Distressed and shattered over Arun's death Seema finds herself unable to perform at the theatre which results in her being fired. If all this heartache wasn't enough for poor Seema, her father dies leaving Seema alone to fend for both herself and her brother
She becomes a big time Sharaabi (drunkard) and starts living with another washed up actress rani (Nadira) whose waning popularity had led to depression and drinking 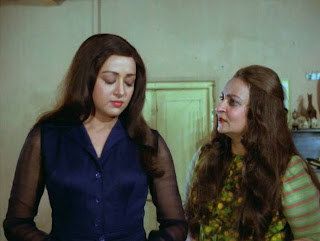 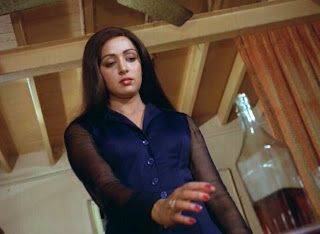 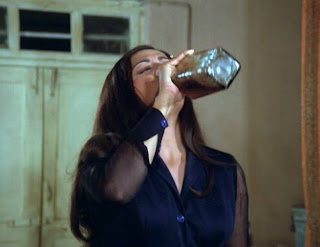 During one of her drinking sessions, she's violated by Prem in vengeance for how she had insulted him during her time at the theatre (Poor poor Seema,  poor girl can't seem to catch a break) 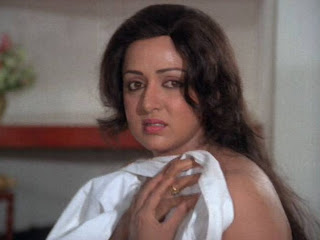 After a rather long spell of horrid happenings, Seema's world comes alive once more when Arun is found alive, plans are made for their engagement 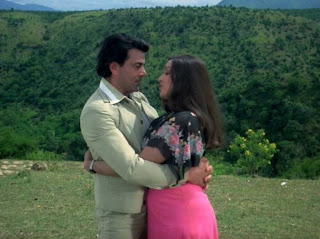 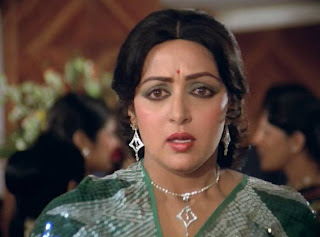 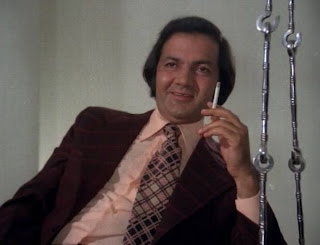 How will Seema handle Situations, will she call off her marriage to Arun? Will She tell Arun about the heinous act his brother in law committed against her? Will Seema ever be able to catch a break?

Asides from its significance of containing the last recording of a Mohammed Rafi song 'tu kahin aas paas hai dost' (Does anyone know if Mohammed Rafi actually finished recording the song), Aas Paas is well worth paasing over. Of all the Dharema (that's Dharmendra & Hema Malini) films I've seen so far (and trust me I've seen a lot) Aas Paas is by far my least favourite, the performances from both of them was lacklustre, the chemistry and spark they both had in movies like Raja Jani, Naya Zamana etc was missing in this. Perhaps the tawdry soap opera style plot and execution plus the abysmal ending ruined things for me, but I just wasn't pleased with this movie at all and unless you're a die hard Dharema fan like me, I'd say paas on

There were a few things I liked though, I loved Nirupa Roy as Arun's wealthy mother in her stylish spectacles and lovely sari's 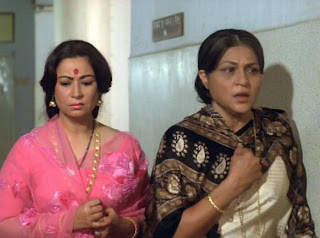 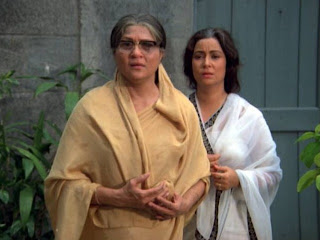 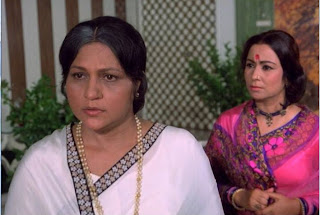 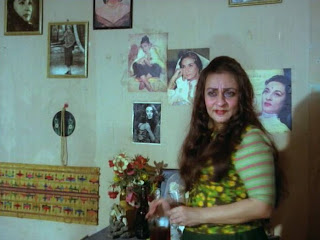 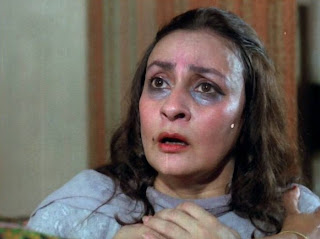 Lovely t-shirt on Asrani, I remember seeing very similar t-shirts with that exact slogan being very popular a few years ago 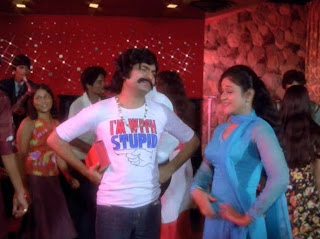 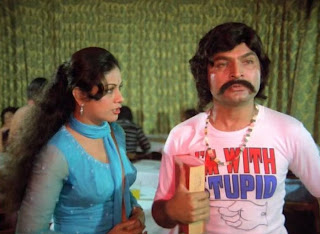 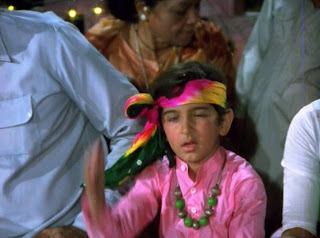 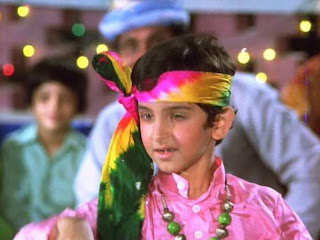 Ok Soundtrack from Laxmikant Pyarelal I remember loving just a coup[le of the songs,  the lovely punjabi style number 'shaher mein charcha hai'  and Hema Malini in full on daaru-tastic mode in 'hum ko bhi gham ne mara' and my utmost favourite from this film and in fact one of my favourite Dharema songs 'Tumhe dil mein bandh kar loon'

*Due to copyright Issues depending on what part of the world you're in, the Video above might not play
Posted by bollywooddeewana at 15:47

Ah, I hadn't seen Hrithik Roshan as a kid before! Cute - and you can see a definite resemblance to the man. ;-)

I haven't seen Aas Paas, but I think I'm going to pass it up. Thanks for the warning!

LOL at 'unless you're a die hard Dharema fan like me, I'd say paas on'! I'm not a die-hard Dharema fan but I'll watch this for Dharmendra - thank goodness it's on YT. And Hrithik was a very cute kid! His face hasn't changed much at all.

LOL at 'Aas Paas is well worth paasing over'! Thanks for letting us know that this is far from one of Dharema's best. I'm not quite a die-hard Dharema fan, but I will watch this for Dharmendra - thanks for the info that it's available on YT. And Hrithik was a very cute kid! His features really haven't changed much.

I think I haven't seen any 80s Bollywood films, actually... haha, that's funny in a way.

@ Dusted off you're welcome, I think I watched it more for its place in filmi history than anything

@ Sharmi I think that was a key thing, the fact that they had grown a bit older plus the ending was really awful

@ The Bard Glad you now know, its nice to be spreading some bolly knowledge

@ mette I know right, the 80's are seen my many as the horrible years of hindi cinema but i simply love the 80's dig carefullya nd you come up with some gems, plus those movies had a style of their own (commercial 80's movies taht is)

@ Scandalous diva You're welcome and I'll definitely check out your post

Bollywooddeewana-ji,
Lovely! It's a beautiful site to see an Indian woman drinking whiskey, let alone chugging fine Johnnie Walker directly from a bottle, na? I can tell it's black label! Thanks for those. Now I must see the whole film. I will add these to my collection.
All the best!
Sita-ji

If my memory serves me right,In J.omprakash`s reena roy,jeetendra starrer AASHA also, Hritik was there for a road side dance sequence("Jaane Hum sadak ke logon ko"

and he is there as a main child artist in Bhagwan dada(*starring sridevi,rakesh roshan, tina munim, rajinikant)produced by rakesh roshan.

In fact asha,aas paas was produced and directed by his maternal grand father J.omprakash(J.Omprakash`s daughter pinky is wife of rakesh roshan)

@ Bollywoodfoodclub You're welcome,Hema Malini did look like she was having fun chugging down all that drink

@ Prakashchandra You are indeed right, and thank you for all that additional info

The problem with AAS PAAS is that it is too morose and ends with a tragedy that could have been well avoided. The plus-point is the melody of its songs.

The movie has been rightly dedicated to Rafi Sahaab who after recording the song asked LP, "Main chaloo?" (Shall I move?)which he never said before after the recordings. He was already suffering great pain but had come to fulfill his commitment.

All in all, it is not an easy movie to watch.

Wawoo, I found my blog by simply blooper i was incisive Yahoo for personal opinion idea humble opinion just like this individuals stumbled winning your own blog, I must recommend your web is extremely impressive I only dearest our take a look, its fantastic!. I don’t have the right time that back for abundant peruse your current website however I need bookmarked it and also signed up for your feeds. I will be back in each day or perhaps two. credit for that super site http://www.newb4u.com/

@ Nasir Your words are so apt, that ending was so not needed but seems J.om Prakash loved indulging in tragic movies, all his films apart from very few seem to end sadly

@ bollywood news Thank you, I've signed up to your blog too

Welcome back to blogosphere, BD!

I remember Aas-Pas quite well because of the much-publicized Rafi's last song and they aired it over and over again on radio. The other songs were nice to and got lots of air-time as well!

Thanks Harvey i hope to me more consistent with my posts though. Aas Paas does indeed owe its fame/relevance to Rafi