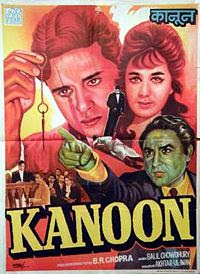 B.R. Chopra one of my favourite directors was at a German film festival when hindi movies were dismissed as nothing but just a song and dance affair, B.R. Chopra saw this as a challenge and made kanoon (Law), a stylish gripping court drama & one of the first songless hindi movies, and 'oh boy' did he deliver, the film also won the filmfare award for Best Direction.

Kalidas (Jeevan) is charged with murder, he appears before Judge Badri Prasad (Ashok Kumar) in court to plead his case. He contends that how can the law charge a man twice for the murder of the same man whom he had been accused of killing 10 years ago, and for which he had served a 10 year sentence. He argues that how can a man be charged twice for the same crime and how the law could not return 10 years he had spent in jail, Kalidas then gets a heart attack and dies in court, his case gathers a huge press coverage 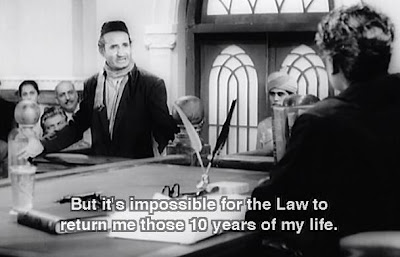 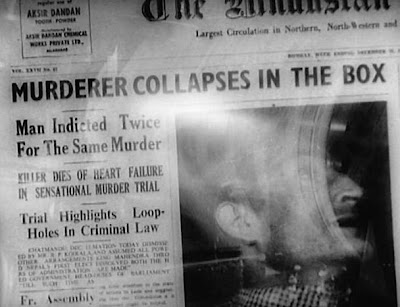 Upon his death, Judge Badri Prasad discusses issues raised by kalidas's case with his fellow lawyers on the unreliability of witnesses and the effectiveness of capital punishment. His fellow Judges beg to differ and they come up with a bet that he (Badri Prasad) can get away with murder, Badri Prasad begs to differ but still takes on the bet 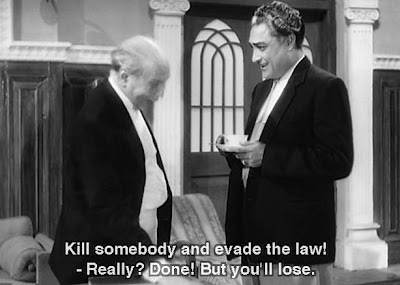 Dhaniram a money lender tries to blackmail Shashikala who was married to another man while her husband Kalidas was in Jail, he asks her to help keep his mouth shut, she leaves in anger refusing to give in to his demands 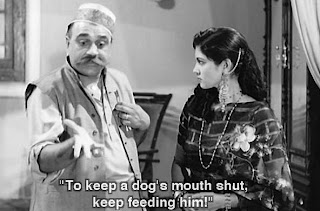 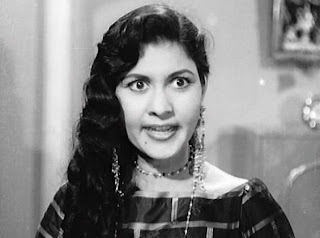 Dhaniram incidentally has also lent money to Vijay ( Mehmood) who is Judge Badri Prasad's son, Vijay had signed away his father's estate as collateral for the money borrowed from Dhaniram. Dhaniram reminds him that if he's unable to return his money, he would take over his father's estate. A scared Vijay who is unable to pay back confides in his sister Meena (Nanda) who tells him off, but decides to help him by telling her lawyer boyfriend Kailash Khanna (Rajendra Kumar) 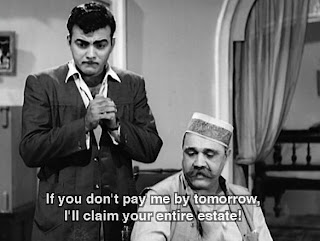 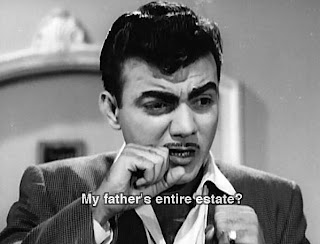 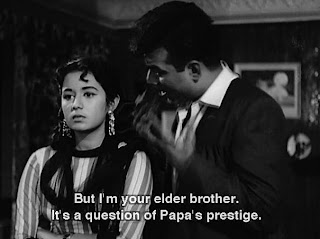 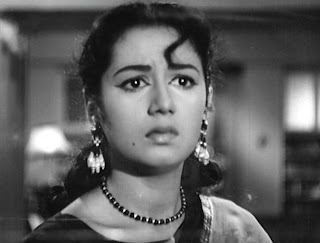 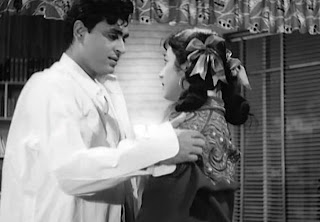 Kailash decides to help and goes to Dhaniram's place, he tells Dhaniram that manipulating Vijay is illegal, and could land him in Jail, a sacred Dhaniram hands the papers over to Kailash, while there a visitor comes to visit Dhaniram, and Kailash hides in Dhaniram's room. The visitor murders Dhaniram, not knowing Kailash had seen the whole thing. A shocked kailash recognises the visitor as his father in law Judge Badri Prasad. Kailash leaves without informing the cops and Kaalia (Nana Palsiker) a thief who comes to burgle Dhaniram's flat gets arrested for the murder 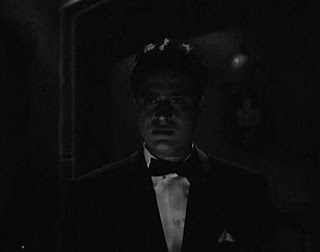 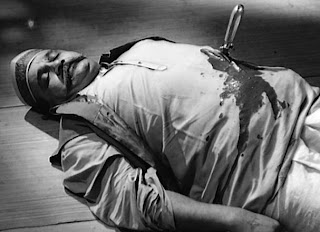 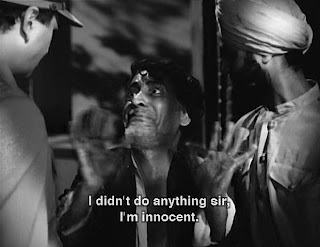 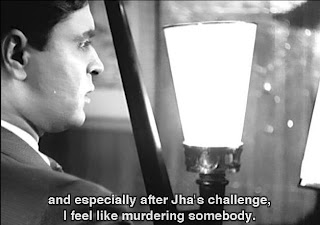 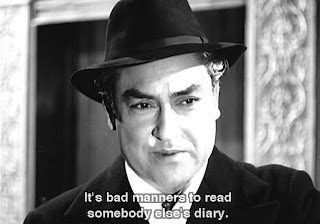 Will Kailash succed in bringing his father in law to justice? Will Judge Prasad get away with the bet? Did he really murder Dhaniram, and why did he do it? Will Kaalia be wrongly punished? For these and many more answers watch Kanoon

Overall Kanoon like most B.R. Chopra films had a social message behind it, without being too preachy, some of the themes explored by B.R. Chopra in the film are how 'life for life punishment' very often if not always isn't about justice but revenge, how emotions and justice should not be related as seen through Kailash and his fight to bring his father in law to justice, and the unreliability of Human witnesses.

Overall Kanoon is an all round entertainer, a taut gripping suspense courtroom drama which explores the issue of law & capital punishment. The characters in this movie are strong and well drawn, Ashok Kumar is excellent, so is Nana Palsiker who won the Filmfare award for best supporting actor for his role as Kaalia. Rajendra Kumar is convincing in his role as the young lawyer out to get his father in law, Nanda gives a strong perfomance and Mehmood as usual is delightful and adds some comedic element to the film.


Another thing i liked about kanoon was its style, even though it had no songs the characters were all stylish, whether Mehmood in his slick hair do's & cute bow ties or Ashok Kumar and Rajendra Kumar in their hats, or the Jazz band and the Rock'n'Roll jive dancers, they all looked stylish. The film included a ballet scene as well, which i have never seen in a hindi film with a Russian ballet dancer and an Indian Bharatanatyam dancer, which is so beautiful and blended so well with each other, east meets west if you like (see pictures below) 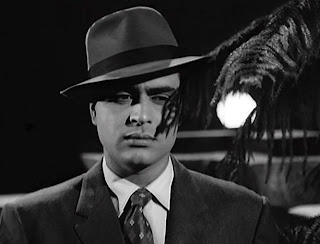 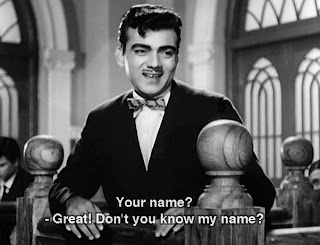 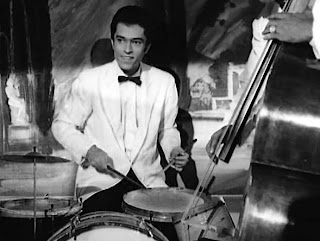 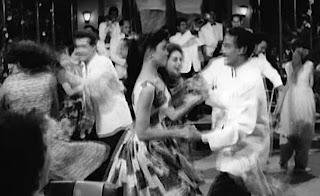 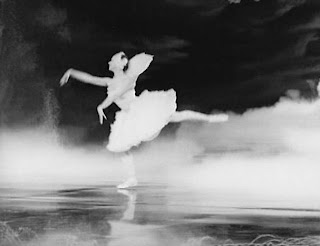 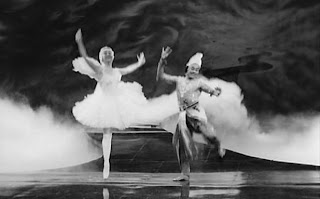 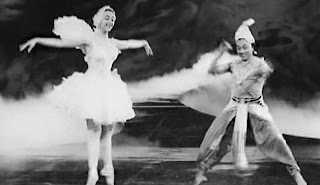 Your review makes me want to see it. Thanks for the caps. Sadly to say, I have to say I've never seen a Bollywood film black and white.

You're welocme Nicki, Glad you liked the screen caps.Regarding black and white films, I was the same for a long time, its only recently that i've started watching them + B.R. Chopra is one of my favourite producers/directors hence i had to see this, i'm sure you'll enjoy it

Kanoon looks and sounds interesting. I haven't really watched many of the old classics, maybe I should get my hands on this one. I hope it's available from LoveFilm.

Thanks for the review :)

Lovely screencaps. The cinematography looks excellent. This is in my to-watch pile and I hope to get to it very soon. Will come and read your review again, after I've seen it!

@ Bhargav the old classics are the way to go for me, i can nver get enough of them, i love them way too too much

Yeah, the first old classic I probably watched was Mughal-E-Azam in colour and I was totally blown away! It still features in my top 10 all time favourites.

By the way, I love your blog's header image! Speaks a lot for your blog :)

thanks Bhargav,glad you like the header as a bollywood deewana, i would watch almost anything hence why i felt the collage/header should have a mixture of classic, masala and romance films

Superb Movie,
Great Drama.Moive did not have any song,yet it entertain you superbly.
Rajendra kuamr,AND Ashok Kumar acted brilliantly ,Suprbly and outstandingly.
I love it.