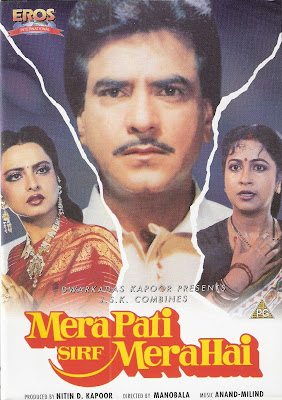 When the title of a film translates into 'My Husband is mine only' you know you're in for some ridiculous campy melodramatic moments and that's just what this film provided me with. And as for the newspapaer journalist who according to dustedoff made these comments

“Both women, no matter how hard to believe this may be, fall in love with Jeetendra…”

better start eating his words because in Mera Pati Sirf Mera Hai not only do two women fall in love with Jeetendra, they're also fighting over him

Prakash (Jeetendra) a struggling road side tailor impresses Sharda (Rekha) a wealthy bank employee with his talent, who in turn invests heavily in his business as a result its not long before he hits the big time even owning his own department store 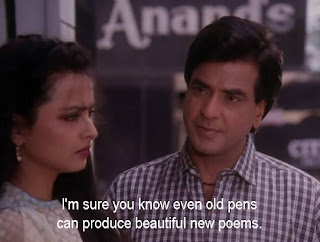 Sharda falls for Prakash's charm and his work ethic, and proposes marriage to him, her proposal is refused by Prakash saying he "esteems her too highly to be married to her" (huge suspension of disbelief!) 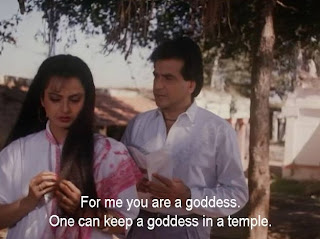 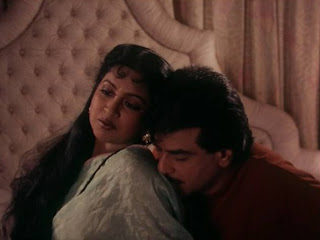 His marriage to Roopa though, is anything but peaceful as all she does is create havoc and trouble for him 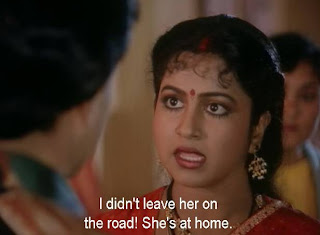 Prakash had been forced into marrying her after his sister Jyoti had been impregnated by her brother Deepak. Deepak had then refused to accept the pregnancy, and in a bid to save the family's honour Prakash begs him to marry Jyoti, he agrees provided Prakash hands over his whole business empire to their family, supplies numerous amounts of Sari's & Gold to his mother(Shobha Khote) as well as marry his sister Roopa, surprisingly Prakash agrees to all these conditions (suspension of disbelief) 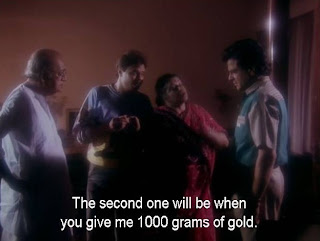 Years later Sharda moves back to the same city as Prakash, and in a strange case of melodramatic coincidence, she moves next door to Prakash 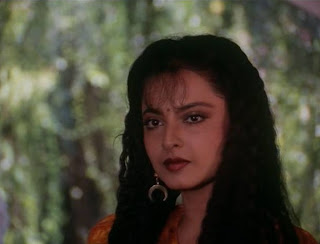 Prakash's daughter Pinky (Baby Shweta) becomes good friends with Sharda, when Roopa sees her grandmother whom she ill treats being pampered by Sharda, she becomes suspicious and starts spreading false rumours about Sharda claiming she's having an affair with her husband 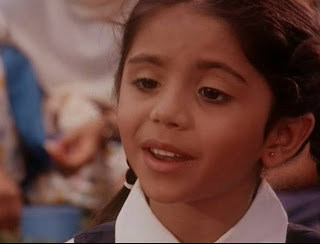 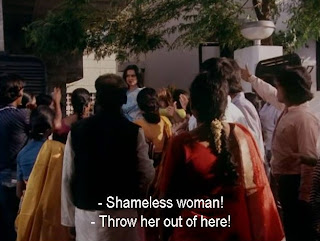 She decides to clear her reputation and goes about it in a rather strange melodramatic way, (as I've said before, a huge suspension of belief is required while watching this film) She moves right into Roopa's house, and makes a home for herself there 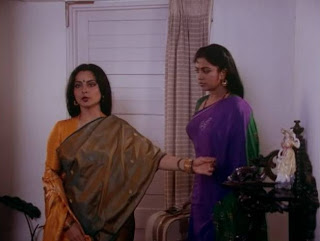 Roopa is furious as one would imagine and beckons her to leave her house, Sharda makes her understand that unless she takes back her allegations in public she's not leaving 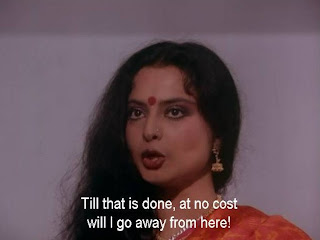 Roopa being the strong headed woman she is refuses to take back her allegations, Sharda too is adamant about moving out until Roopa clears her reputation, adding insult to Roopa's injury is her husband Prakash who backs Sharda, claiming Roopa must apologise 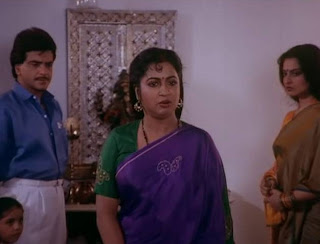 So Will Roopa apologise and clear Sharda's name of the accusations? Will Sharda be able to stick out oer will she give up and move out? Would Prakash realise his affection for Sharda or will he continue looking up to her as a goddess?
Ok i don't believe i actually just typed out what must be one of the most ridiculous plots i've ever seen, but alas it had to be done, it had Jeetendra in it after all, one gets the idea that his daughter Ekta Kappor the producer of many serials based on such story lines did her homework well watching her Daddy's films from the '90's, Mera Pati Sirf mera hai (what an amazing title, na!) is watchable even with its irritating storyline for its campiness and ridiculous soap opera style execution, if you're a big fan of the numerous Ekta Kapoor style serials that are hits with millions of Indian audiences then this is a film you might want to check out 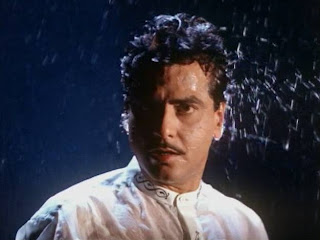 Jeetendra's career was in decline at this point, despite the whole ridiculousness of the story his performance is good albeit in a very melodramatic way 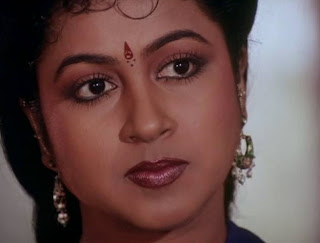 Raadhika Sarathkumar one of my favourite heroines who played the lead role in one of my favourite bollywood femme fatale revenge sagas kudrat Ka Kanoon was ohh so annoying as Roopa in this, you know an actress has done her part rather well when you want to flip your remote at her for playing an overbearing character 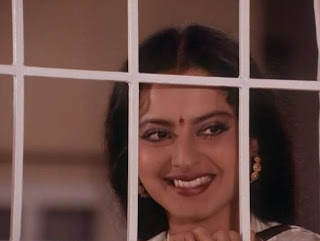 Rekha as usual was a joy to watch, given the ridiculousness of the story, Rekha gives quite a commendable performance
The songs by Anand Milind seemed to have been hits at the time of its release, there's the sensuous 'Thandi hawa hai' two versions of this songs occur there's a seductive one and a more upbeat one which i've embedded below, it pretty much sums up the whole movie
A daaru song 'aaj gaale ke niche utara' and the wonderful peppy number 'maine tujhe khat likha' one of the contributing factors to me watching this film
and what better way to round off Jeetendra week than ending with what must be the best tailor/salesman song ever and such a fun picturisation too 'Aaiye Farmaiye' Jeetu-ji Zindabad
Paisa Vasool Rating: 4.5/10
A big thank you to everyone who contributed to my Jeetendra week posts, i'm still discovering more of his works, do feel free to leave recommendations of films to watch out for him in, i guess Nasir sums it up perfectly when he says "there's something about him, something that just can't be ignored" while he might not have been appreciated by the critics, he had lots of charisma and taht x-factor that saw him through over 3 decades of hindi cinema, Jeetu-ji zindabad
Posted by bollywooddeewana at 21:10

Thanks for the review Bollywooddewaana.

By the way, personally I liked Jeetendra very much in ARPAN though the movie belongs to other three leading artistes as well: Reena Roy and Raj Babbar Parveen Babi.

I'll second Nasir's recommendation of Swarg aur Narak. I'm not much of a Jeetendra fan (I guess you've figured that out by now!), but other films of his I like include The Burning Train (though he's just one of a huge star cast) and Parichay. Plus almost anything from his early films, especially Caravan and Roop Tera Mastana; and yes, Ek Naari Ek Brahmachari, which I reviewed a while back.

@ Nasi i like Arpan too, i reviewed it a while ago on here t

thanks for the recommendations Swarg Narak seems to be a popular choice,i've seen Apnapan too, i'll look out for Khushboo

@ dustedoff I'll be sure to add Ek nari.... on my next bolly shopping spree,i liked him in Caravan too, it seems to be everyone's favourite Jeetendra film, i've been looking for Roop Tera Mastana for ages but the dvd is rare and hard to find as usual

Oh God. Another such movie that was crying out for Jeetu was where Radhika has that weird pigtail.. haha ! Gosh I hated these movies.

Mera Pati Sirf Mera Hai - this title reminds me of this sitcom named Sarabhai vs Sarabhai more than the movie. One of the protagonists in the show loves watching these never ending tv serials and Mera Pati Sirf Mera Hai used to be her favourite.
Thanks a lot for the Jeetendra Extravaganza...it was a nice walk down the memory lane. Had seen most of these movies long long ago and had almost forgotten them.
I would recommend the same movies as Nasir and dustedoff.

@ Avdi I can imagine why you would, though i'm not a fan of soap opera's i enjoy such films

I remember watching this movie as a kid! Main tujhe khat likha was so hip then.

Thanks for covering this movie.

@ thequark You're welcome the quark Maine tujhe is still a hip song in my opinion, its such a peppy number. What a funny blog you have, i have just subscribed to it

This movie sounds completely insane- which make it a ideal wath for me! Since its a Bolly movie though, Im bound to suspect that Rekha leaves the family once she has fixed it...darn.

@ Shweta it might well be, though i would warn you, unless you're a hardcore fan of the stars and unless you're watching it with not too much expectations, it would be enjoyable and you're so right about the end, you know your movies really well ;0)