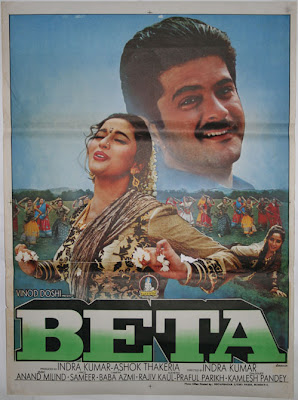 There is nothing new or fresh about this movie, it contains all the usual stereotypes in the form of wicked stepmother (check) feisty daughter in law (check) relatives who are hangers on (check) a shy and retiring husband who's overpowered by his wife (check). What keeps this film endearing are the stellar performances mostly from the female protagonists/antagonist, good music and an easy to follow storyline

Raju is a motherless boy who engages in way too much self pity for my liking, he cries himself to sleep every night thinking his mum will one day arrive, he also creates drama on the day of his birthday when he thinks his mother would actually walk into the room 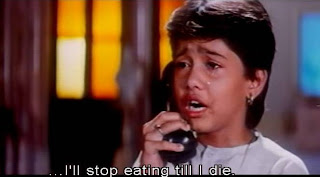 True enough a new mother walks into his life on his birthday in the form of Laxmi (Aruna Irani) whom his father had just married, our little Raju is very happy 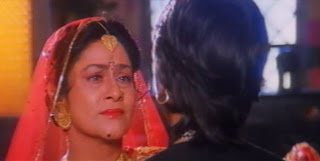 Laxmi however is only after their wealth but unknown to her is the fact that only when Raj marries and at the consent of his wife can the will be transferred.Laxmi along with her brother in law Totaram (Anupham Kher) thus begin her conniving game 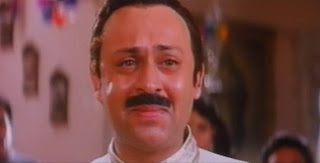 She also convinces Raju that education won't get him power, that real power comes from working in the fields all in the name of making him illiterate thus little Raju leaves his education and starts working on the fields. Raju grows up in awe of her and shows immense support and respect to her

One day he meets Saraswati (Madhuri Dixit) and takes a liking to her, over time the two fall in love and they get married 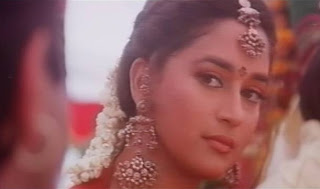 Laxmi is quite threatened by Saraswati as she's educated, Laxmi had been hoping Raju would marry an illiterate, whom she would be able to manipulate into transferring the property to her

Following their marriage Saraswati moves in with them, she find out that Laxmi doesn't have his best interests at heart but is infact only interested in getting her hands on his wealth.Thus follows a highly meldoramatic showdown between mother in law and daughter in law with some superb camp bitchy dialogues like those you can see below 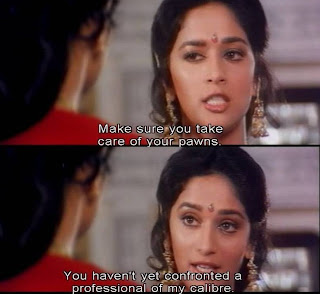 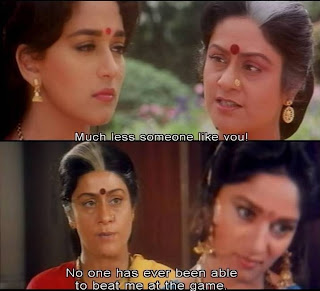 Battle of the diva's

Beta was an enjoyable watch, there are very few bollywood movies that i've been able to watch in one go, Beta is one of them, the cheesy over the top melodrama + mother in law versus daughter in law showdowns were very soap opearish but such things excite me, the movie felt very much like a Cinderella slash Seeta aur Geeta affair. Another thing i loved about Beta was its ending i expected it to be over the top with a major masala style revenge dished out but it had forgiveness as a theme rather than revenge

Another thing i loved about Beta was the strong female character in the form Sarawati who wasn't the atypical self sacrificial, she was decisive and wasn't afraid to air her opinion. Madhuri did indeed carry this movie on her shoulders as she shines, she was also oozing some serious sexual appeal with all the chest thrusts, lip bites, and heavy breathing, this movie was a Madhuri show 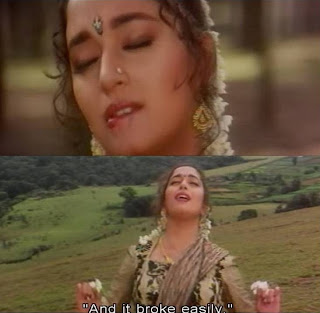 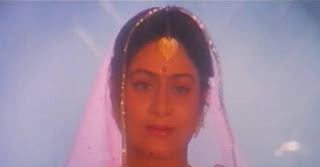 Also a delight to watch was Aruna Irani as the wicked Mother in law, you just wanted to hate her, which meant she got her part down to a T, plus after a decade of supporting roles, this finally earned her a filmfare best supporting actress award

Anil Kapoor was impressive but i don't think his performance as Raju was enough to get him the Filmfare Best Actor Award i've seen him in better roles and in fact Aamir Khan is said to have been gutted he didn't win the best actor award for his role as Sanjay in 'Jo Jeeta Wohi Sikander' for which he had been nominated in the same category as Anil's performance in Beta, Aamir as never attended the filmfare awards show ever since

Good music from Anand -Milind, i loved them all on first listen, there's 'khushiyon ka din aaya hai' where a happy Raju celebrates the joys of finding a new mother, the sweet 'main teri tu mera' & 'Koyal teri bolhi' and of course how could one talk about this movie without mentioning 'dhak dhak laga' with a highly sensuos Anil & Madhuri

According to Imdb Beta is a remake of a 1989 Tamil film Enga Chinni Rasa, has anyone seen that, how is it in comparison to Beta?

BUY DVD
Posted by bollywooddeewana at 12:13

Beta is one of my faves. One I heard it was a remake of a Tamil film, I was so shocked! Now, I know why I like Southie films so much. I haven't seen the original but really want to

The movie was a rage at the time of it's release!

Thanks for this great write up. I adore this film. Say, did you buy the poster for the film that I see at the beginning of the post? I bought that same one for a friend who loved the film. The screen caps of the Madhuri vs. Aruna bitch off are great! I don't see how Aamir could possibly think he was a contender for the filmfare since he word such stupid high waisted acid washed jeans in "Jo Jeeta Wohi Sikander". ;)

You left one part out here:
"One day he meets Saraswati (Madhuri Dixit) and takes a liking to her, over time the two fall in love and they get married"...but before that he sees her at the fair and saves her from almost being rapped in a giant barrel by some crazed gun speeding around he in a motorcycle. Now that you've told me the movie was remake of a 1989 Tamil film Enga Chinni Rasa, that crazed barrel scene makes more sense.

@ Nicki i still have to watch my first Tamil film, I've seen quite a lot of bolly movies that i really loved only to find out they were from Tamil films

@ Praz I can imagine, it was pretty much back to basics bolLywood family masala drama

@ bollywoodfoodclub you're welcome sita-ji indeed I left that bit out, sometimes when i'm doing these write ups I try not to give too much away. I did infact love Aamirs energy + high waisted jeans and all (he really knew how to rock them....lol) in Jo Jeeta wohi Sikander, I found that film endearing, and i think he deserved the award although in fairness Big B too deserved it for his role in Khuda Gawah it was a real tough choice for them i imagine

I didn't buy the poster, i got it from bollywood originals (link below)

LOL - I like that description, and there was none better than Madhuri to deliver them ! Assume you meant "campy" ?

I bought that poster from Bollywood Originals, and it had a 2 inch by 1 inch hole right hear Madhuri's bangles! Still worth it, sort of.
All the best!
Sita-ji

@ Amodini Lol indeed Madhuri made it spicy,camp/campy i use them interchangeably, camp/campy its the same isn't it

@ bollywoodfoodclub Its rare that you'd get one of these posters without any defects, i myself love these posters so much, however i've never bought one, i see myself doing so in the near future though as i utterly adore these film posters especially ones from the 40's-70's

bollywooddeewana,
Yes, but this was a SIGNIFICANT hole right at a point of interest/center of the poster. I understand small holes, edge damage, etc., but this, as they say in the Bollywood films, "THE LIMIT!" It was listed as to be in the second from teh best condition and that wasn't correct. Just an FYI if you deal with them in the future. Of course I still thought the poster was gorgeous. :)
All the best!
Sita-ji

Thanks for the warning Siat-ji, i will definitely be wary