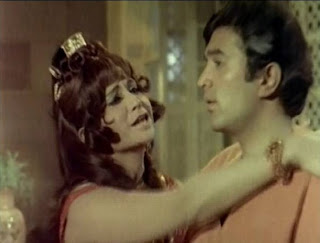 Part of the major appeal why Bollywood appeals to me are the songs, i particularly like the way some films (mostly masala) have certain formulaic songs, there's usually a happy song, a teary song, a romantic song, a seductive song and sometimes an angry song. Today my subject of discussion are those seductive songs, as every avid watcher of bollywood should know by now, no self respecting hero would/should give in to the charms of the seducing woman except if he is a villain. Below are some of my favourite bollywood seduction tunes

'Bahon mein Chalo' from Anamika (1973) This a rather diferent seduction song, here no flesh is being shown, our lovely heroine kust longs for her husband to come into her hands. Lata Mangeshkar has cited this as her favourire song of all time


'Husn ke lakhon rang' from Johnny Mera Naam (1970) What can be said of this song my jaws were left wide open when i first saw this song, Padma Khanna is utterly sexy in this watch how she teases Premnath by perfrorming a matador act with her skirt

'Hai Bichua' from Jheel Ke us paar (1973) watch as Yogeeta Bali tries in vain to seduce a rather cold and disgusted Dharmendra, she sways,she writhes on the floor, shows some leg and cleavage but he's having none of it, forget him Yogeeta go to Ranjeet instead

'Hum na hum rahe' from Muqqadar ka Faisla (1987) Meenakshi Sheshadri is dressed to kill in head to toe red, comes in a breezy night to tempt Raj Babbar in this soothing sensual song

'Mere kis kaam ki' from Be-sharam (1978) What would a bollywood seductions list be without Bindu, watch as she teases Amitabh with her sexy moves, he can't help but smile and look on adoringly

'Aao na' from Mere Jeevan Saathi (1972) I love you Helen, she definitely does not discriminate, watch as she attempts to seduce a blind Rajesh Khanna , you can see him fighting the urge badly but as the law of hindi film states that a well respected hero should never fall into temptation with a "bad woman" he turns down her advances

'Aa jaane ja' from Intaquam (1969) What can be said about this song, Lata Mangeshkar proves her versatitility with this song which i would have considered more Asha than Lata. Very interesting picturisation as well as Helen in full European girl mode tempts an African man with her sexuality (lots to discuss about this absurd picturisation but i shall save that for another day)


'Come closer' from Kasam Paida Karne Wale Ki (1984) i love you Bappi lahiri, this song proves just how much i do, anyone who is a big fan of pop, r'n'b or soul needs to listen to this soothing and sensuous song


'Dilbar Dilbar' from Sirf Tum (1999) What can be said about this song and i'll come out of the closet and admit that i listened to it repeatedly 25 times back to back in one day plus Sushmita Sen is totally sizzling, watch as she points, flicks her hair around and sways in this superb composure by Nadeem Shravan with vocals by the fabulous Alka Yagnik

What are your favourite seduction songs, kindly share them with me ;0)
Posted by bollywooddeewana at 08:22

Ah, good list! I'd been planning to do something similar, but it's way off right now - maybe next year. Aa jaane jaan will definitely be on my list too - weird costumes and choreography notwithstanding. Helen sizzles in that! And I like Baahon mein chale aao and Husn ke laakhon rang as well. Other favourites:

Aa jaa re aa zara aa (from Love in Tokyo), an unusual song in that it's the man who's doing the come-hither act:

I love Yeh Mera Dil (Don). I think Helen did a much better job seducing Amitabh in the original version than Kareena did seducing SRK in the remake.

Thnaks dusted off i had long been looking for an exception where it was the man doing the tempting, thanks a lot for the aa jaa re zaa number plus i never knew there was another movie named Mahal with Dev Anand

@ Anonymous I do indeed see your point, its always like that with anything, when someone does something first, its always hard to live up to the original. The only thing i hated about Helen's Yeh mera dil number was the outfit she had on

Great list, Bollywooddeewana. I dont think I've ever seen the Meenakshi Sheshadri one before - she is absolutely stunning there (but WHY does she want to seduce Raj Babbar?!).

Helen has to be the queen of seductive numbers - bet no body has ever done as many of them as she has, and so well too. Love her Don number - it has to be the definitive one in the genre!

My come-hither favorites are the same as dustedoff's and I would also add this Asha number from Neend Hamari Khwab Tumhare - Bheegi hui is raat ka aanchal - where Asha's voice does all the heavy lifting in the seduction department.

What a list!! Loved the theme. Would like to remind some, but right now i m numb. So cool numbers you have posted :) Lazy lamhe is one fantastic number of recent times. Is 'Aaaiye Meherbaan, baithiye jaane jaa'' comes into same genre?

@ bollyviewer thanks for that song Nanda looks gorge and indeed helen is the quenn of such seductive numbers, Meenakshi was Raj's love interest in Muqqadar ka ffaisal but before he fell for her she had to seduce him, i've always thought Raj babbar was quite a looker, don't you think so :0)

@ Darshit thanks for that i'm yet to see Howrah bridge, madhubala looks so beautiful and it does indeed count as a seducticve song albeit a more understated one

Great post! Ye Mere Dil from Don is the quintessential seduction song for me, so I agree with Anonymous. Another that I always think of is Raat Ankeli Hai from Jewel Thief.

I thought of a couple more. This one with Bindu in Zanjeer:

And from Beta,Dhak Dhak Karne Laga,
but who is seducing who I'm not sure, seems mutual, so that's probably not a seduction:

And Aruna Irani in Bobby, seems to be a seductress here:

Wah Wah! Great list! It's very interesting to see how seduction songs have changed over the years (or the picturizations anyway). I'm sure I have a list somewhere, but nothing comes to mind right now. I'm going to eagerly check out Helen's Yeh Mera Dil - I didn't like Kareena's take on it too much.

@ bollyfoodclub Yeh mera dil is the quintessential seductive song, i know its so popular hence why i dropped it from the list, thanks for sharing the Bindu one as well, i need to get round to watching zanjeer someday, and oh yes i've just blogged about Beta and i embedded the dhak dhak song, i would say its a sensual song as they both seem to be into each other, usually in a seductive song one party isn't interested and the tempter has to try to get them interested

@ Shell thanks by all means watch Helen's original its fab the only thing that i hate about it was her outfit and i actually liked Kareena's in Don as well, i loved her facial expressions, she seemed really into it

Umm..how about the awesome Sreedevi one from Mr. India or Madhuri's Dhak Dhak from Beta?

Those are my tops, but I guess they are most people's now, right :)

@ Nishitak Thanks for stopping by and adding your comment, i really would have added those, but you know they're obvious choices that everyone thinks of, hence why i didn't include 'yeh mera dil' from Don

Hi Juliet, thanks for stopping by, taht's indeeda lovely song , Tanuja looks utterly beautiful in it and i simply adore the picturization

Enjoyed this post. Have to agree that Yeh Mera Dil (Original) is a great seduction song :)

I liked Yogeeta and Dharm from Jheel ke us paar.

Another one is hootho pe bas tera naam hai - from yeh dillagi
http://www.youtube.com/watch?v=lHXX9bgSTAI

i like the song from lazy lamhey from thoda pyar thoda magic movie very much.
thanks admin for posting. good work,keep carry on.
http://mp3videosongs123.blogspot.com

This is such a great resource that you are providing and you give it away for free. I love seeing blog that understand the value of providing a quality resource for free. Bollywood Movie Songs

Your article features verified? beneficial to myself and many other also. you have shared such a important information about female bollywood villain is very hot and how long will it take to resolve it thank you for sharing this information .