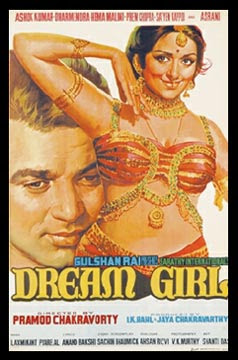 Apologies for the long absence, i had a bad case of the winter blues, but i'm well and able now, as its taken me ages to complete my Dharmendra week, i'm going for the kill today and i'll bring Dharmendra week to an end (or should i say month considering it took me so long to complete my 6 Dharmendra movies which i had all planned to review before his birthday on the 9th)

In Dream Girl directed by Pramod Chakraborty who did a handful number of films such as Naya Zamana (1971), Jugnu (1973), Azaad (1978) with Dharamendra and Hema or as Harvey has suggested "Dharema" our hero plays a ladies man who's on his quest for his dream girl

Anup (Dharmendra) is a ladies man and is such hot property amongst women, so much so that women act cattily towards each other all in the hope of being Anup's chosen one 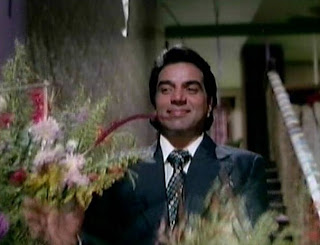 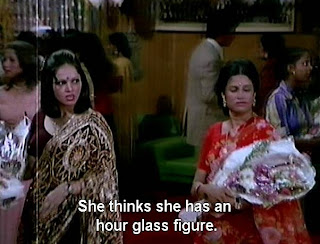 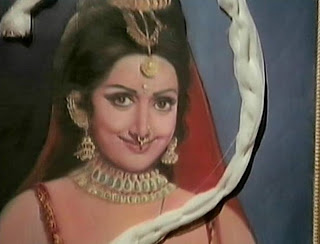 He comes across his dreamgirl Sapna (Hema Malini) while out on a business meeting, he's taken aback by her beauty and his dil (heart) gets all squishy 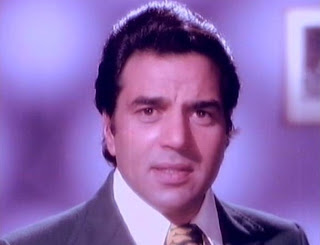 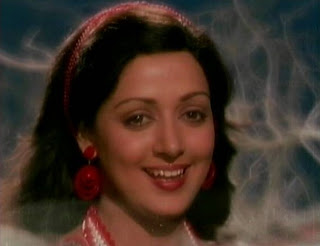 Sapna spots this and takes advantage of his infatuation, she deceives him and steals cold hard cash from his car, Anup is gutted a beauty like Sapna wasa such a shady character however it turns out Sapna isn't an all out bad girl, she had stolen Anup's money to help care for an orphanage she runs with Chandu (Asrani) 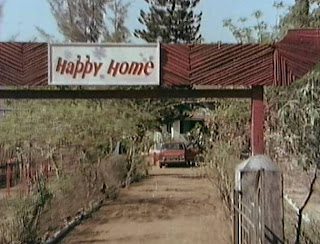 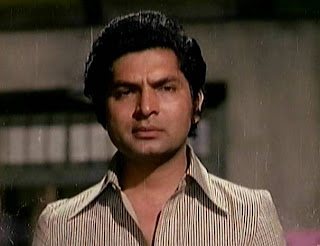 When the money runs out Sapna and Chandu realise they must start earning money to take care of the kids, they decide to allow a rich American NRI family The Kapoors (Ramesh & Seema Deo) to adopt some of the kids 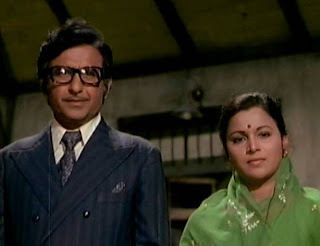 When the kids in the orphanage realise they're about to be given up for adoption, they start acting up on the day of the adoption in order to deter the kapoors from adopting one of them, the Kapoors however settle for Chintu a crippled kid and promise to get him treated 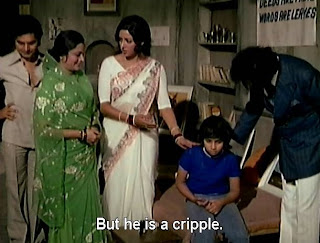 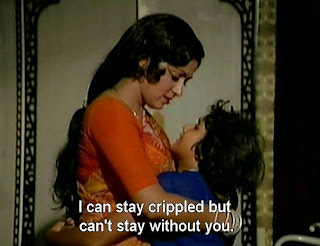 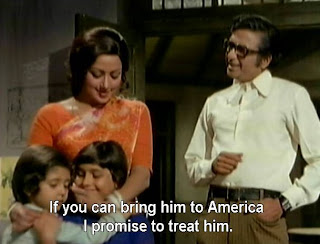 When pressure from Anup's grandfather Mr Verma (Ashok Kumar), starts for Anup to be married he comes across Sapna once more while she's out with her cunning ways 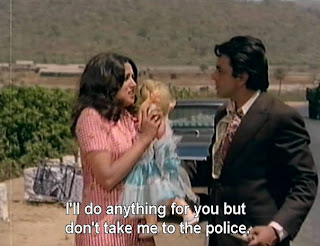 He cuts a deal with her promising he would pay her whatever she wants, all she has to do is act like a princess who is about to get married to him, as anyone who's watched lots of bollywood films should be able to tell, its not long before they fall head over heels for each other 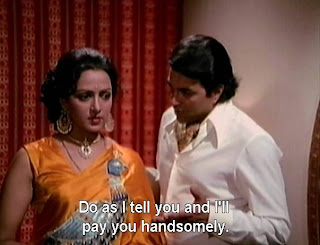 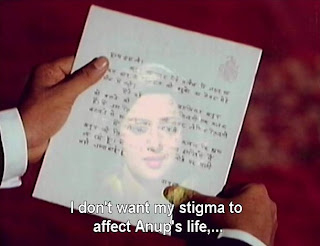 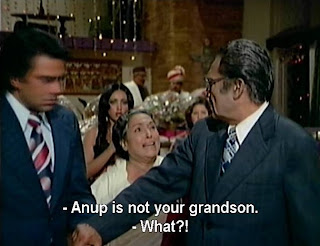 How will things turn out? Will Anup still be able to marry Sapna? Since Anup is not Mr Verma real son, what really happened to his own child, will he be able fo find him/her? Will Anup ever get to know his real parents?

This film is indeed where Hema earned her dream girl title, although i enjoyed it a bit, it did my head in especially in the last few minutes where things get a bit too zany for my liking, i wanted this film to be camp but it just ends up being a messy haphazard entertainment, it's not as slick or fun as Jugnu was but if you enjoy the jodi (coupledom) of Dharema give this a go

There were some hilarious moments though, like this one scene where one of the orphan kids walks into a room naked, the look on the kids faces were hilarious 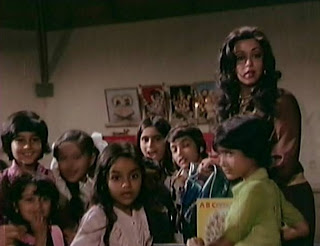 Also spotted was a very young Padmini Kolhapure, she definitely kept her childhood looks growing up 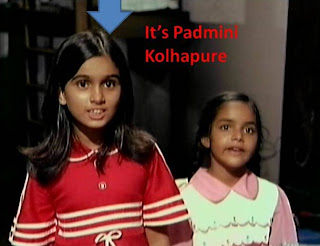 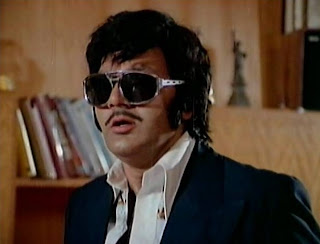 After spotting this breed of dogs in many a bollywood film, i have come to conclude they must have been hugely popular in India 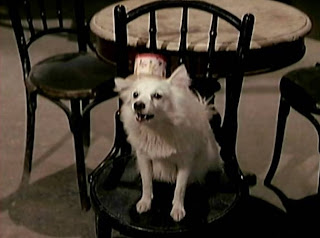 What kiddies film will be complete without Master Raju, i simply adore this kid he might be a pain in the neck, but i love him 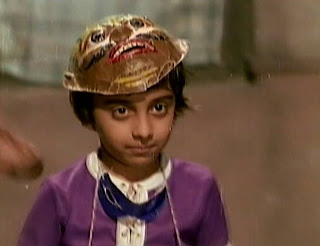 The songs are by Laxmikant Pyarelal are fantastic, there's feisty 'O Raja Babu', a fun kiddies song 'Chuppa Chuppi ke' and 'Duniya ke log' (see it below) where we get to see Hema Malini and the kids from the orphanage in disneyland Florida 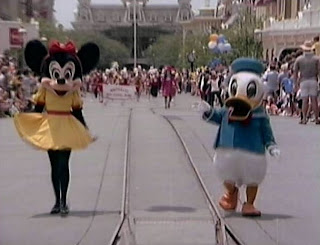 Look its Donald duck and minnie mouse in bollywood

and of course the amazing 'kisi shayar nahin (dream girl)'

BUY DVD
Posted by bollywooddeewana at 10:22

I've seen this when I was a kid, but don't remember much of it except Kisi shaiyar ki ghazal... that song was hugely popular, and film music shows on TV used to show it every now and then. I remember wishing (and I hasten to add: I wasn't yet 10 years old!) that I could wear clothes like the ones Hema wears in that song!

Nice review. I love your dog screencap! Do you know what kind of breed it is? That's actually a very interesting research topic- dog breeds and their popularity in different cultures! Perhaps certain trends are indicative of certain cultural tendencies? Hmmm... :)

I had seen this movie when I was a kid, may be around 14 and I had loved Hema's dresses in Kisi shaiyar ki ghazal.
Too much of drama at the end and that too a very obvious one. I had seen Rajajani, Sharafat and Dreamgirl all together (on the same day). Same set of characters and similar stories, I still get confused as to which is which ;-)

Is it this movie where Prem Chopra says " Waqt waqt ki baat hai " at every opportunity he gets?

Not all that great but had found it quite entertaining.

Interesting review... I can't wait to see this one, just because it earned Hema her 'dream girl' sobriquet and is such a milestone in her career. And yes, I've noticed that as well, most of the movie 'wonder dogs' are that breed! And my goodness, it's impossible not to love Master Raju!!! He's so adorable in everything... I just wanted to gobble him right up in 'Parichay', 'Faraar', 'Bawarchi'....

@ Minai thanks,Thats avery interesting topic you've raised, i think its a Pomeranian and i strongly belive they must have been some sort of staus symbol in India
here's more about them

@ Sunehri I haven't seen Raja Jani but i can imagine them being very similar as i had read the plot synopsis and there Dharam asks hema to pretend she's a queen. i don't remeber Prem's dialogues in this but soemthing tells me it must be in raja Jani where he had those dialogues

@ daddy's girl thanks for that word Sobriquet (i've learnt something new today ;0)
i reckon since you're a dharam fan you might just enjoy it a bit. of course Master Raju is adorable but he soo deserved that slap Anitabh gave him in Faraar, i actually enjoyed that film, i saw it weeks ago

You must see "Raja Jani" which not only had fab songs but the story was quite good and the movie moves at a fast pace. Dharam is incredibly handsome in the very first scene when the titles are on with melodious "Jaani o Jaani" song

@ Filmibuff I've been trying to get hold of Kitaab but can't seem to find a subtitled dvd anywhere, i've had Chitchor with Amol Palekar right? on my list to buy for ages, i'll check it out sometime then