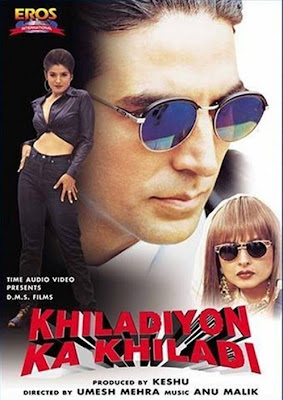 Rekha! Rekha! Rekha how i love thee, as those who read this blog regularly know, i've nothing but love for Rekha and would gladly watch any film of hers no matter how rubbish or atrocious it might be. This film with its nonsensical storyline reminds me why i simply love Rekha, she's one bollywood heroine who fought hard against playing motherly roles when she was deemed to be past it by many, even if it meant she played ridiculous characters, Rekha fought hard gainst playing motherly roles and in Khiladiyon Ka Khiladi ( The Player of Players) Rekha plays a Villain and might i add she pulls it off mighty darn well, and of course this film also features Akshay in his 90's hairy chest action hero days

following the defeat of Crush (played by real life WWF wrestler Brian James) by Maya's The Undertaker (played by WWF wrestler Brian Lee). Ajay (Inder Kumar) one of Madam Maya's boys is ordered to dispose the body, He's caught by the police while trying to bury the body & is given the option of execution or outing Madam Maya if he wants to save his life

Maya comes to know to know through one of the corrupt police officers about Ajay's plan to out her, as a result she becomes eager to kill Ajay. Ajay is kidnapped

Akshay (Akshay Kumar) his brother in India hears of the news & travels to America in a bid to rescue his brother, on his way he meets and falls for Priya (Raveena Tandon) who happens to be Madam Maya's younger sister

When he arrives in America he finds out from Ajay's friends that Madam Maya may be responsible for Ajay's kidnap, as result he gets into her gang, with the intention that she might lead him to Ajay. Madam Maya is taken by Ajay's bravado when he rescues her from getting killed, she falls in love with him at which point she puts all feminists to shame by declaring 'his love has completed her'

Will Akshay find Ajay his brother? What will be Madam Maya's reaction when she realises Akshay had merely been using her as a pawn that'll lead him to his brother?


A truly nonsensical action film in the very sense of the word, fans of early Akshay movies when he was going through his Jackie Chan phase will truely enjoy this film. The major highlight for me however was Rekha as the villain Madam Maya with all her fashion outfits and wig changes 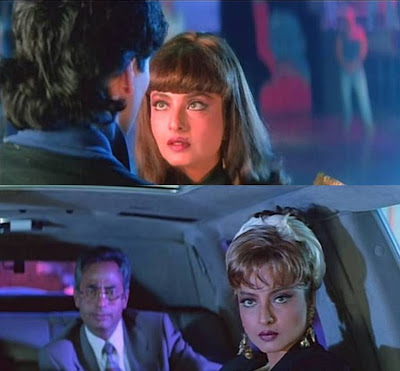 I can totally see Rihanna in some of these looks 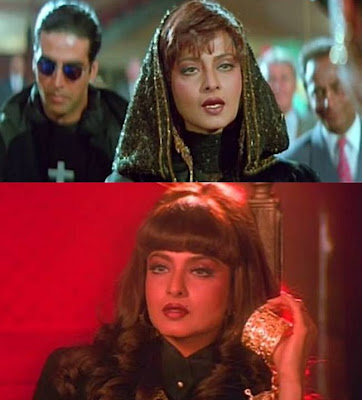 They wrestle each other in the mud

He pretty much had her eating out of his hands

Now of course all this had tongues wagging that Rekha and Akshay were dating, some fans were worried of what had become of their favourite actress but she silenced all her critics when she was awarded the Filmfare Best Supporting Actress award and the Star Best Villain Award (Take that Haters)


Anu Malik as usual has concoted some fun catchy numbers like 'Aaj meri Zindagi' , 'itna mujhe pata hai' & 'Tu kaun hai' & my favourite number without a doubt is Dil Dhadke (In the night lose control) simply for its awesomeness as well as a brief sampling of Madonna's 'Secret', be sure to check out the video especially the beginning where Rekha says 'Even Naughty Girls Need love Hey na?' Atta Girl!
Paisa Vasool rating: 5/10 (Watch it mostly for Rekha and Akshay in his cheesy days as an Action Hero and oh for the 'Dil Dhadke' song, that alone made the movie worth watching)
Posted by bollywooddeewana at 21:36

Good Lord, Rekha looks fierce even when she's blindfolded and drooling! I think she's gorgeous. I wonder what Filmi Girl's take on this was...

Akshay Kumar acted in this slew of khiladi films back in the 90's - and as far as I can remember, I saw only one of them (not this one). That chocolate sauce and all mud looks fairly risque for Bollywood, even if it was in the 90's! But I am increasingly impressed by Rekha: she so doesn't look her age.

She was dating Akshay at the time, and why not. This movie was a gorgeous move on her part. I never saw it, but will never pass it up if I get a chance.

Wow! Where to start? First off love the new sidebar for FEMME FATALE linking. Very nice comparisons of the movie's looks of Rekha and the current retro throw back images of Rhianna and Lady Gaga. It's fun getting older to be able to pull those references. You know Rekha is older, but I have often wondered if her age is rounded down a bit, as some actors tend to do here. But really, this could be some seminal cougar casting with her and Akshay. If their DOBs are accurate in wikipedia, Rekha (1954) and Akshay (1967) it's not that drastic of difference, but significant when the woman is older. For a male to be the much, much older lead is hardly examined, so it's funny that even I look at this for Khiladiyon Ka Khiladi. I have not seen this film, but I want to now. Seeing you are a Rekha fan, Maybe you can help me figure out what this movie was that I saw a brief glimpse of on TV in India last year. I starred Rekha, and I think Rishi (I think)and they had some type of forbidden love, different social standing, she was the poor one, perhaps a servant, and Ranjeet was in it too. I only saw a brief segment, but it piqued my interest and would love to see the whole movie and have no more clues. It looked like 80s era. Once and a while I try and search her filmography to find what it could have been, but haven't yet. Does that sound familiar and do you know what film it might have been?

p.s. The song you've linked in here, "Dil Dhadke" samples Madonna's "My Baby's Got" a Secret" like you say

But even more heavily is influenced by,

"Self Control" by Laura Branigan

But you already knew this. :)
All the best,
Sita-ji

Aaah Rekha... I know she's made of awesome, yet I am always surprised when confronted by the evidence!

Its interesting to look back on the 90s now. I loved Akshay back then, but from today's perspective, he looks so hairy and mulletted and so not cool!

@ Ajnabi She is fierce indeed, i don't think she's reviewed this yet but it should definitely be up her alley since it stars Akshay

@ dustedoff I know i was thinking the same thing, well according to Avdi and some other sources they were dating at the time so i guess no awkward feelings from both of them. This is my second of his khiladi films, next in line is Sabse Bada Khiladi and then Mr & Mrs Khiladi

@ Avdi Thanks for confirming that they were dating, watch it if anything for Rekha

@ Bollywoodfoodclub Thanks for the side link love, i simply love ass kicking Bollywood female movies. Thanks for the Laura Branigan link, i had no idea.as far as rekha & Rishi the only movie i can think of that they starred in together was Deedar -e- Yaar, does it sound familiar, Rekha was a Tawaif (courtesan) in it.

On their ages i think its pretty much accurate, i think Rekha's age should just be, and indeed the seminal cougar casting is what makes the film a stand out despite its nonsensical plot

@ bollyviewer I actually love 90's Akshay minus the Mullett though, i seem to enjoy his 90's films more. I liked the hairy chest and i don't really like all hair waxing biz most stars indulge in these days

Hahaha, that's Rekha for you. Pushing and probably tearing the envelope every time.. But I will always prefer her movies of the 70s and 80s.. Movies like Mr. Natwarlal, Ghar, Silsila, Muqaddar ka Sikander, and of course, Hrishida's awesome - Khubsoorat. Do check it out if u can.

Here's a quick peek at one of the awesome songs from Khubsoorat:
http://bit.ly/c1jWJG
Do lemme know what you thought about it

This is the first Bollywood movie I ever saw, and it made a fan of me, so I believe is not that bad! OK, I like movies with nonsensical and WTF moments, but I liked Akshay, the Laura Branningan rip-off, the mystical ending and the presence of The Undertaker. Great review.

@ JoseViruete Thanks for your comments & the kind words. How amazing that this movie actually made you a lover of bollywood, i think if this was my first i would have been impressed by just Rekha and the Dil Dhadke song