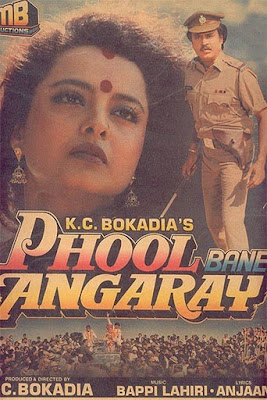 I've never been one to believe in the idea of a guilty pleasure, in my opinion one likes what one likes and there's no reason to be embarrassed by it, this film changed my mind about the idea of guilty pleasures and i'm as guilty as charged, this film is one guilty pleasure i shall be indulging in again , votes rigging, corrupt polticians and an ass kicking female cop all made for a trashily entertaining film 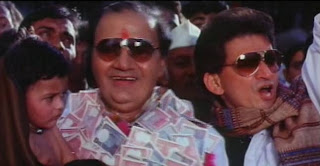 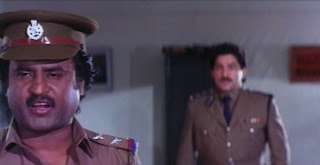 Murlidar (Shafi Imandar) an aide of Vishamba has a sister (Rekha) whom Vishamba's son Charan Raj wants to marry, when Namrata (Rekha) hears that her uncle plans on marrying her off to Vishamba's son she runs over to Ranjit whom she loves and asks him to marry her, Ranjit agrees and they both get married 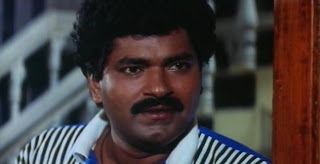 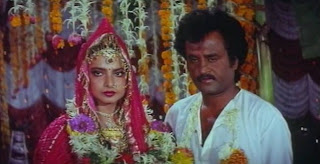 When Charanraj hears about Namrata's marriage to Ranjit he is furious & he kidnaps her while she's on a school trip, when Ranjit comes to save her, he's captured by Charan Raj and his men who tie him up and force him to witness his wife's rape 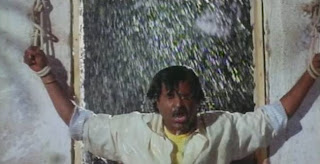 Not only him but the School kids who were on the school trip with Namrata were forced to witness the rape (what was the director and the film censor board thinking?) 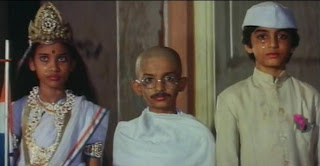 When Ranjit manages to break free in a fit of rage, he's shot dead by Charan Raj thus Namrata is now a widow 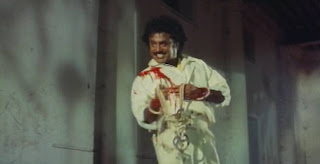 Namrata takes her angst to Shiva & she threatens to kill herself if she doesn't get justice, only to be rescued by her father in law (played by the avuncular Alok nath) who urges her to fight for the cause & bring all those who wronged her to justice 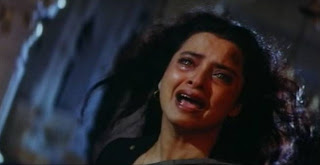 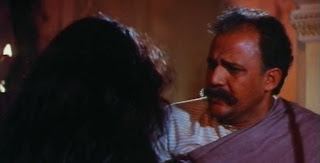 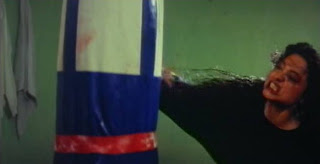 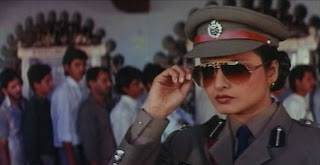 Will Namrata succeed in her quest to avenge her husband's death or will she suffer the same consequence? Watch Phool Bane Angaray (When a flower becomes a fireball) to find out 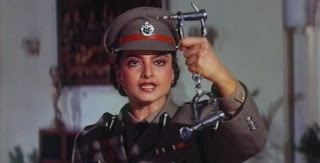 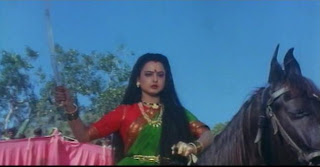 A truly atrocious and nonsensical film made watchable by Rekha (a MUST SEE for all her die hard fans) who gives a very passionate performance as the avenger, her fighting skills as the bad ass female cop were hilariously entertaining, i was literally rolling on the floor, seems the director was just hell bent on making Rekha display her fighting skills at any opportunity and Rekha just looked great doing them, the fights in this movie have to be campest but yet amazingly choreographed fights i've ever seen in bollywood, Rekha was pushing 40 when she did this but she pulled it off hilariously well. Below are some of the fighting clips for your enjoyment

Of all the female revenge sagas bollywood dished out in the 80's and early 90's like Khoon bhari Maang, Zakhmi Aurat, Kudrat ka Kanoon this is the wackiest of the lot, but i enjoyed it immensely, mostly for Rekha's kick ass action fights. There's somemething about bollywood movies with female lead characters exacting revenge that excites and entertains me immensely maybe there's some Freudian Psychosexual analysis that needs to be done on me

The music by Bappi lahiri is on the fun playful side, there's the hilarious daaru song 'Jeena agar jaruri hai to' & 'Dil tera jaan teri' title track 'phool kabhi' where we get to see Rekha training to be a bad ass cop, a beautiful wedding song 'Gori kab se huye jawan' my favourite is the fun 'Naina ho gaye bawre'

Total Paisa Vasool Rating: A personal guilty pleasure that i shall be indulging in again
Posted by bollywooddeewana at 19:13

If its a vigilante woman masala then I am so there! I never liked Rajnikanth in his hindi films as he seemed to bogged down by showboating and just general hamming, but down in his Tamil and other films he was great! Those pooooooor kids that had to watch the rape, that sounds like a mind scarring experience for them!

When I had watched this movie in 1991, I did find it enjoyable, chiefly owing to Rekha. Till date some scenes are vivid in my mind, such as the hypocrite Anupam Kher trying to save a black ant from being crushed under his foot in presence of Rekha. (I hope this is the same movie.) Then there was a young pair of lovers and a certain song they sing was very appealing to me.
All in all, thanks for the review.

lol - Rekha's fighting is hilariously good and might actually be worth watching this film for. But I find rape scenes very hard to take - especially in 80s and early 90s films where they were too drawn out and too graphic.

Looking back on what films I watched in the 90's, I have to admit I watched very few - somehow just the titles of a lot of the films put me off. And this one had Rajnikant, too! Yikes - I am not a Rajnikant-in-Hindi-films fan, though in Tamil films I believe he has a huge fan following. (Just for kicks, here's a page I came across, which is a fun reflection on just how big the man is!):

@ rum A mind scarring exercise it was indeed, they could have edited that scene out. Rajnikanth does indeed overact and hams but therein lies his appeal, i couldn't help it but collapse in fits of laughter, by all means watch this for Rekha only

@ Nasir the film you're talking about is Bhrashtachar with Rajnikanth as well as Mithun & Rekha. The two young lovers were Shilpa Shirodkar and Abhinav Chaturvedi, i've included a link to the song below

@ bollyviewer Indeed that's the only reason i enjoyed this movie so, its a must for all Rekha Lovers, and i agree with you on rape in the 80's in particular, i don't think it was too drawn in this film as they kept flashing back and forth between Rajnikanths face

@ dustedoff i read that link you posted, Lol he is indeed Cheesy as i just noted in my reply to Rum's comment, there in lies his appeal (to me anyway). I'm yet to see his Tamil films, i like the man, i find him very amusing, so i might just get a moserbaer special of 6 of his acclaimed tamil films

Never saw this one, may watch if I COme across it on some TV channel.

There was a spate of such movies at one time.

Indeed I got mixed up between this one and Bhrashtachar (The Corrupt). Thanks for reminding me that. That song is lovely there: TERE NAYNA MERE NAYNON SE MEETHEE MEETHEE BAATEN KARTEN HAIN...

I had seen this movie back in early 1990's. And as bollyviewer puts in, I too find rape scenes very hard to take - especially in 80s and early 90s films. So never felt like watching it again, though I have to admit that Rekha's fights are hilarious. I catch a glimpse of it here and there (after she becomes a cop) when this movie is aired on tv. But somehow never got myself to see the whole thing again.
dustedoff : That article is so entertaining. No matter how many times I read it, it always feels like I'm reading it for the first time ;-). There are some more facts about him - one I remember in particular is Newton committing suicide after witnessing Rajnikanth's laws. Let me search for them.

sunheriyaadein: Actually, that was the article I was searching for - but couldn't find it. Instead, I found this one, so decided to share this instead! But I do hope you're able to get hold of that one - it's hilarious!

Fun review, and I can totally understand why this is a guilty pleasure for you! And you don't need any Freudian analysis - you just love FIERCE heroines, which is cool! I haven't really seen much from the female-wreaking-revenge genre, but I'm definitely interested (although as you've all said, the rape scenes can be pretty horrific). I also need to watch more Rekha movies, I've seen her in maybe 7-10 films and liked her in most of them, but I want to see more... incidentally I just saw her in Hrishikesh Mukherjee's 'Khoobsurat' and she was absolutely great in that (although of course it's completely different from films like this one!). Which Rekha movies are your all-time favourites?

I have to admit that I haven't watched many of Rekha's films but this review makes me wanna watch it. Thanks!

What were the censor board thinking ? Not much - they don't. Hindi films are a generic U or A rated, and even U rated films which are supposed to be kid-watchable have ghastly "adulty" scenes. I wish they'd have a better rating system - until then ofcourse there's my blog :-)

@ Avdi By all means do, Rekha will keep you entertained all the way through

@ SunehriYaadein Thanks for those hilarious links, i love Rajnikanth, he is so entertaining, so cheesy but undeniably entertaining

@ Daddy's Girl, indeed I just love Fierce Heroines, a massive break from all the self sacrifiical roles, some of my fave Rekha films are

Ghar, Do Anjaane (one of the first roles that made people take her seriously as an actress), Ghar & Umrao Jaan. Even i myself for some reason feel i haven't seen enough from her for some reason. I saw Khubsoorat in my early days when i was reigniting my love for bollywood and found it boring, a re watch is due

@ Nicki You're welcome, Rekha will surely keep you amused

@ Amodini Thanks for shedding light on the censorship issue

Thanks very much for the Rekha recommendations, I've only seen 'Umrao Jaan' out of those (blogged about it here: http://ilovelovelovedharmendra.blogspot.com/2006/11/umrao-jaan.html), will track down the others....