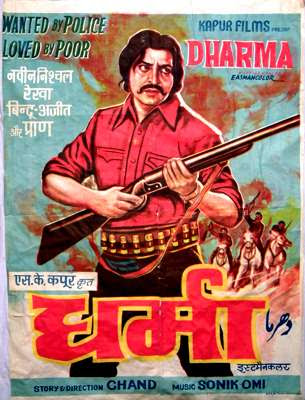 Pran without doubt is one of my favourite bollywood actors, this is one of the few films where his personality took centre stage
Dharma Singh (Pran) a wanted dacoit is betrayed by his friend Bhairon Singh (Rajan Haskar) who inserts plastic bullets into a gun Dharma intends to use in carrying out a raid, Dharma ends up being held by police but manages to escape 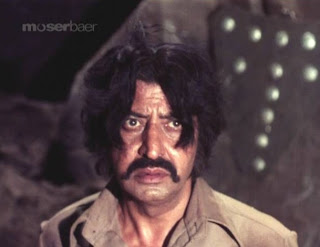 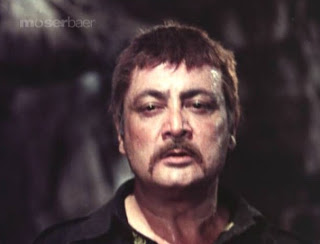 Following his escape he kills his betraying friend Bhairon Singh and while escaping from the cops a bullet hits his wife Parvati, as a result she and his son Suraj go missing. To avenge his missing wife and son, Dharma goes to Ajit Singh's (Ajit) house and then kidnaps his daughter, during a chase by the cops he throws her off the horse only for her to be picked up by a Madam 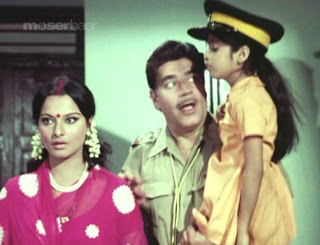 Years go by and Dharma Singh is now a high flying bandit known as Chandan, he also disguises as Nawab Sikandar in order to gain secrets from the cops through his friendship with Ajit Singh 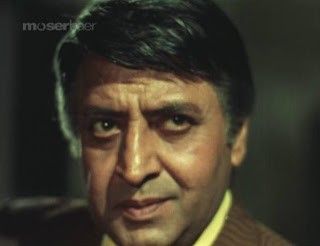 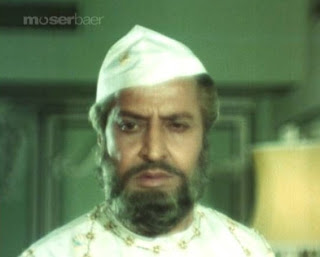 Pran as Nawab Sikander
His son Suraj now called Raju (Navin Nischol) joins Chandan's crew to help in carrying out heists, Chandan however has no idea Raju is his long lost son, as he thinks his family are deceased 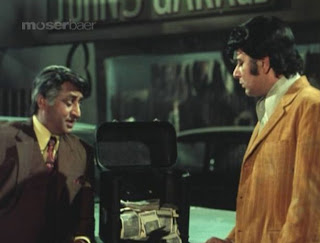 Raju meets and falls for Radha (Rekha) who is a courtesan, but he doesn't know this 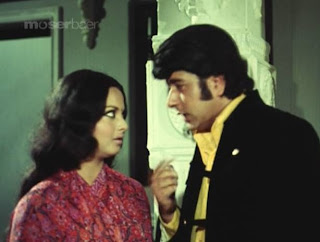 During a police chase following a stealing operation that goes wrong, Chandan & Raju seek hostage in a Kotha (Courtesan's residence) where he Raju sees Radha performing her courtesan acts 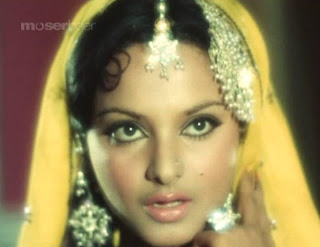 As usual in filmi scenarios like this, she explains she might be a courtesan but her honour is still intact(Is that so, how come???). When Chandan (Pran) thanks her for hiding them while the cops came searching, he asks her to request whatever she wants 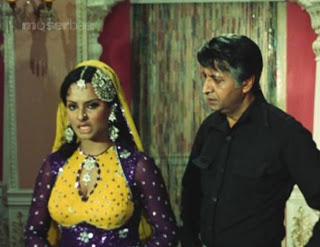 she asks for a respectable life and home much to the dislike of her mistress in charge Jamnabai who had raised and trained her, Chandan promises to arrange this for her 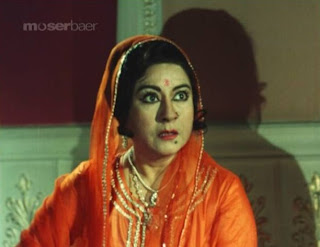 Once she's left the Kotha she focuses her attention on reforming Raju, by getting him to quit his crime jobs and get on the straight and narrow 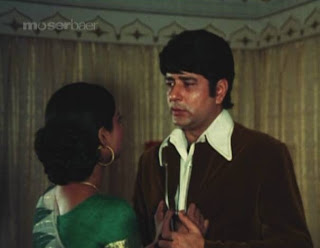 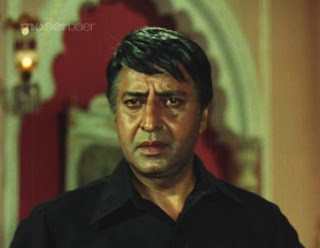 Also on Chandan's heels are Chaman (Ramesh Deo) whose father Chandan had killed, joining him his is father's sidekick Mangal (Madan Puri) 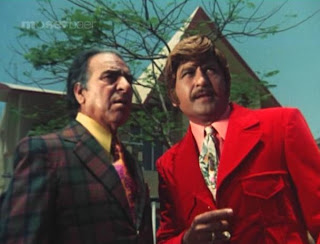 When Mangal discovers that Parvati (Anjali Kadam), Dharma's wife is still alive, he hatches a plan to deceive her by pretending Chaman is her long lost son he had been caring for 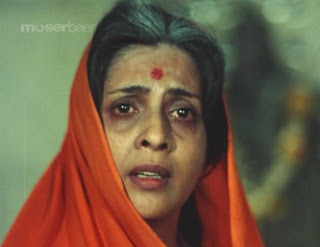 Meanwhile, Ajit Singh while visiting his friend Nawab Sikandar (Pran), comes across Radha who just so happens to have a strong resemblance to his wife Asha 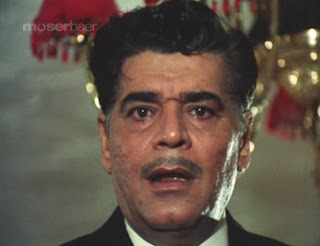 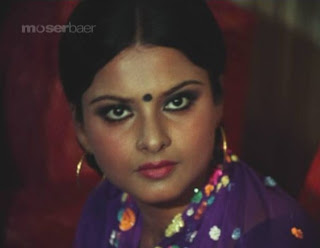 Will he realise she's his long lost daughter? Will Raju ever return to the world of crime? Will Dharma finally be exposed and caught by the police?
Dharma is a must watch for all Pran fans, this is one of the few films that relied heavily on him as no other person could have just pulled it off the way he did, Pran takes centre stage here and all the other characters wane in comparison to his. Dharma is a fun camp masala fare made extra enjoyable by Pran's fierceness, make sure you track this down if you're a Pran lover. Also his den is to die for check it out in the clip below

Some other Eye Candy 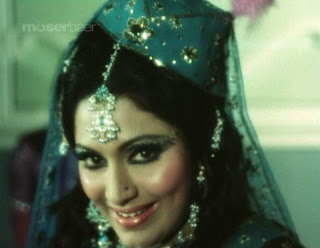 Bindu in her qawwali gear 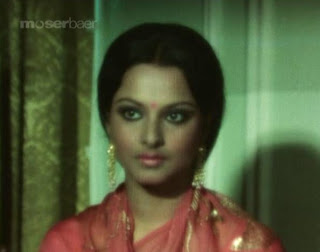 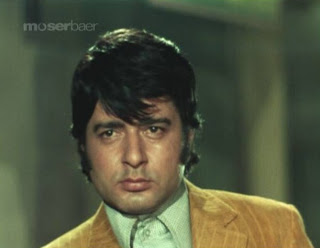 This one's for you bollyviewer, i know how much you love Navin
The songs by Sonik Omi are fab too, from the sweet 'Sada teri umar' to the mujra 'Main teri Guneghar hoon' and 'Yaar Nighaon mein' a cabaret number with the who of who of Hindi film vamps, it starts with Helen and then Faryal, Sonia Sahni, Jayshree T and then ends with Bindu to my utmost favourite, the awesome qawwali 'Raaz ki baat kahedu toh' that takes place between Pran and Bindu, I've included the video with English subtitles, push play, Sit back, relax and enjoy
Paisa Vasool rating: 6/10
Posted by bollywooddeewana at 21:12

I really rather like all these crime-drama-romance-much colour films of the early 70's. They may not have been great cinema, but they were usually very entertaining in a pleasant sort of way, AND the often had fabulous music. The Burning Train, Yaadon ki Baaraat, Hum Kisise Kum Nahin, Victoria No. 203...

Pran always spices things up. And, here he is occupying centrestage. Looks like an out and out entertainer. have to watch this one :)

Pran's den is wow!!! I had almost forgotten Raaz ki baat was from this movie. I love Pran and a film that has him in the centrestage is a must-watch for me. This looks so very entertaining!
BTW, have to watched Dharmendra-Hema starrer Azaad?

How can I forget - Raaz ki baat, with the punch line - mein chandan hubahu hoon. I watched this movie years ago with my boyfriend, and had to hold hands thru the movie which was very distracting.

Pran's acting has always been amazing..n i bet tis is one of his finest performances..good job wit d review!..else,its hard 2 believe n see rekha in such a non glam role ;)..nice tat u included d vide of "raaz ki baat" along wit subtitles :)

@ Dusted Off I love them too, they're mostly always Paisa vasool and top value for money even when they're bad there's always something to like e.g. the sets, fashions or the songs

@ Sharmi It sure is, it was nice to see the whole film revolve around him, wish there were more films made with Pran as the central character

@ Sunehri Do give i a go, i myself just loved taht den of his. I have Azaad on my rental list, i'm yet to see it, i'm sure it has lots of nice sets and campy masala goodness

@ Avdi LOL How sweet, i love the idea of going to the cinema with a loved one and holding hands all the way through, thanks for sharing that

@ The Bard Thanks, Pran is amazing as you've said and the Raaz ki baat song just had to be here with subs otherwise other non hindi speakers won't appreciate the song as much. Rekha was glam here, i know many people think she only became glam when she shed weight and became lighter but i've always loved her right from the beginning of her career

Thanks for the review BD. I second dustedoff comments. Raaz ki baat was a tremendous hit of its time. Maybe I will take a second look at the movie which I am sure I must have seen at the time of its release. And yes, MAIN CHANDAN HUBAHU HOON is a clincher.

Echoing everybody here, Raaz ki baat keh doon to was the main reason why I picked this up (psstt... how did you guess I love Navin Nischol so? ;D). I even started watching it, but when Nischol turned up in a bad wig, I kind of postponed the Dharma-viewing for a later time, which I think has now arrived.

For more Pran goodness, you should try Victoria No. 203. Pran shares the limelight with Dada Mani, and the film is exceptionally entertaining.

One thing that still baffles me in the movie is the use of a small part of the Lata cabaret number "Yaar Ki Nigahon Mein" which is from a totally different film "Night In London" by a different composer "Laxmikant Pyarelal". And this song is just before the Asha cabaret number in the movie "Arre Saaqi Jo Kal Ki Hai", music by Sonik-Omi. So I still don't get the rather interesting addition of the Lata song.

In any case, whatever cabaret songs Lata has sung always tops everything sung by anyone else, IMO that is. She probably hates singing such numbers, but the ones she did, she did top notch vocals.

You all should see the original Lata song on YouTube.

@ Nasir You're welcome, do give it a go

@ Bollyviewer i remember your musings about him on your Valentines day post on your ideal men. Lol at the wig , do you know i still can't tell when its a wig or not

@ Anonymous Thanks for stopping by and commenting, i myself wonder why Helen was used and that too, with a song from another film, but I'm guessing its because the other female dancers in the video weren't as well known as her with the exception of say Bindu & jayshree T, so perhaps Helen was used to introduce them

I thoroughly enjoyed reading your blog on Rekha. Keep it up.

Thank you so much Zed, I appreciate your kind words

Thanks for sharing. Your blog is more informative. This is very nice article and very good information. We really enjoy your blog & content.

Nice work...! also you can know about

Great blog, also you can know about

Thanks for sharing. Your blog is more informative. This is very nice article and very good information. We really enjoy your blog & content.

Great blog, also you can know about

Nice work...! also you can know about