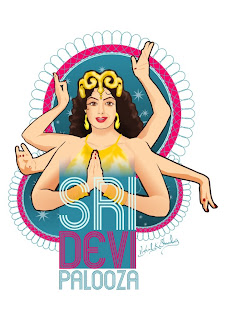 I'm a bit late to the party but there's no stopping me, I've watched way too many Sridevi films in preparation for last weeks Sridevipalooza that was happening on some bollywood blogs (see the posts here), but due to work and other life commitments i couldn't really post anything last week, but this week, I have plenty of time on my hands, thus from tomorrow the 22nd of August to the 28th i shall be bringing you a Sridevi Movie/Post a day 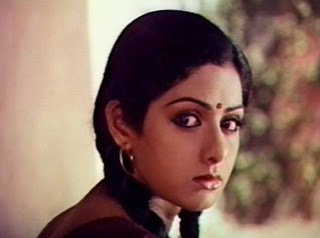 Now Sridevi is like Marmite, you either love her or hate her, and of course I'm a lover but i'm not utterly defensive in my love for her i.e. If you hate Sridevi and i know many of you on the bolly blogosphere aren't too keen, and that's all cool by me, in fact that's the very thing i love about the blogosphere, the chance to read about actors/actresses i might not care about being written about and loved by others, it helps my filmi education and in some cases can make me see the actor in a new light 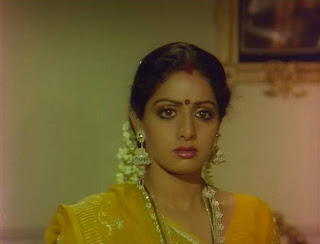 But it has to be said that the woman (Sridevi) is a force to be reckoned with , as far as 8o's bollywood is concerned with anyway, of all the female heroines that era gave us, Sridevi is the only one who seems to have stayed in the imaginations of many.
As a big 80's bollywood lover, the likes of Rati Agnihotri, Poonam Dhillon, Amrita Singh, Meenakshi Sheshadri (more about these actresses on this blog in the coming months) are way up there alongside Sridevi for me, but ask other bollywood fans and Sridevi in most cases, is the only name many would be able to identify with and look back on with a great sense of nostalgia, Why is this so? 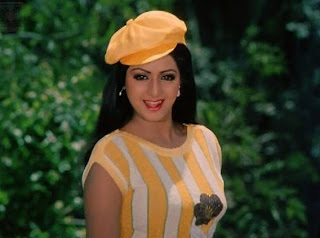 Hmm, Not a question i think i can answer fully, but i think a lot of it is to do with her x-factor, that certain thing that makes a person stand out above the rest regardless of talent and ability. Over the next few days, i'll be reviewing some of Sridevi's well known and some less well known films, till then i leave you with one of my fave Sridevi songs of all time, remember it even topped the list of my tribute post to her last year
Click here for all Sridevi related posts on this Blog
Posted by bollywooddeewana at 20:06

You are right BD, you either love or hate Sri Devi, and I actually did not/ do not mind her...in small doses though (her voice gets to me sometimes). having said that, I loved her in Mr India, Sadma, Lamhe and Judaai. Looking forward to her return to the silver screen next year in Mr India 2.

PS: Will write soon. Work has been chaotic with the Australian federal election.

There are some films starring Sridevi that I like and some films I hardly care about. She has never been a huge favourite of mine. But I will look forward to your posts, they should be very entertaining :)

Yes I go with the majority view about Sridevi. Veen has pointed out the movies which are favourites of mine too. To that list I would add GUMRAH. I don't mind watching this movie all over again.

I don't hate Sridevi, but I do tend to steer clear of her films... which means I haven't seen very many of them. But I do like Lamhe.

I have to say that I am with the majority here. Few movies of hers that I like are the ones Veen and Nasir mentioned above, plus Chaalbaaz (it's nothing compared to Seeta Aur Geeta, but I still like it).
Looking forward to your posts.

@ veen I'm yet to see Sadma, yes shame for such a big fan like me

@ the Bard Oh yes, i've got it all covered

@ Nasir this is the second time i've heard you profess your love for Gumrah, i myself have been looking for it but its so hard to find on dvd

@ Dustedoff i had seen Lamhe a long time ago, it was one of the movies i saw in the years when i was out of sync with bollywood, its one i need to rewatch sometime

@ Sunehri i hated Chaalbaaz for all i can remember, looks like its another one i might have to rewatch