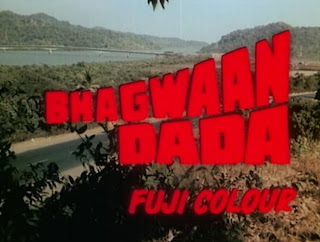 The third film in line for Sridevipalooza is Bhagwaan Dada, finally of all the films I've reviewed so far this week, at this stage of her career Sridevi seems more confident as an actress and displays some great comic timing in this rather forgettable flick
Bhagwaan Dada (Rajnikanth) is a tout who works under local terrorist Shambu Dada (Danny Denzongpa) 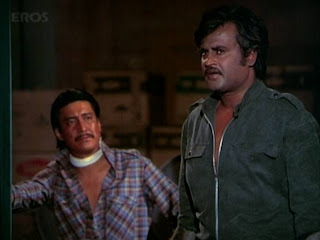 Following a rape act Shambhu carries out on a local belle, she commits suicide and her child Govind is adopted by Bhagwan Dada who's disgusted by Shambhu's behaviour, he decides to raise Govind him as his own. Bhagwan Dada thus becomes a changed man and leaves the world of stealing behind and becomes a saint of sorts in his local neighbourhood 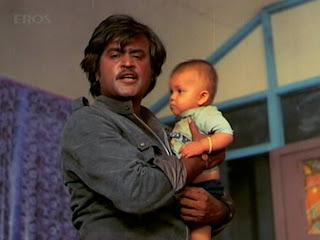 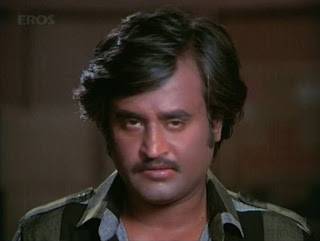 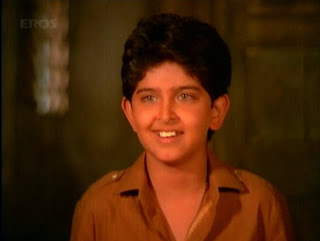 When Swaroop (Rajesh Roshan) a village bumpkin moves from Gangapur to Mumbai, he's robbed and none other than Bhagwaan dada saves the day, Bhagwaan takes a liking to him and helps him settle down to life in Mumbai 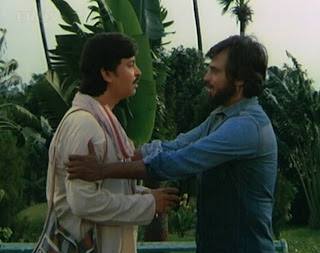 When Swaroop now a rather confident Mumbaiker rescues Bijlee (Sridevi) from a group of touts, Bhagwan urges her to live with them and in the atypical filmi way, Bijlee and Swaroop fall for each other 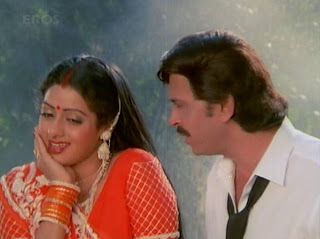 but trouble arises when she's caught in a prostitute sting operation, Swaroop and Bhagwaan are disappointed as she never revealed this to them, she tries pacifying them by explaining she only does it to swindle money out of men without actually selling her body (Really??????, either way a slut is a slut) 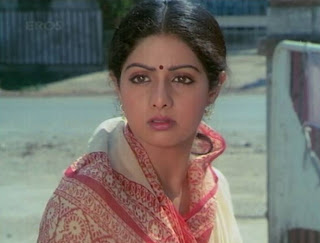 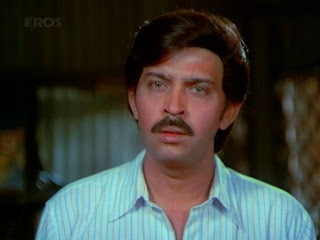 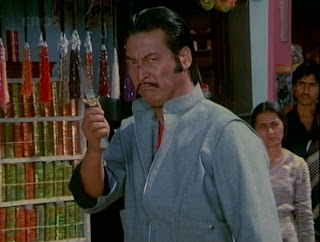 Will Bijli and Swaroop be reconciled? What is the reason behind Bijli's decision to walk the streets? Will Shambhu succeed in his quest for revenge? 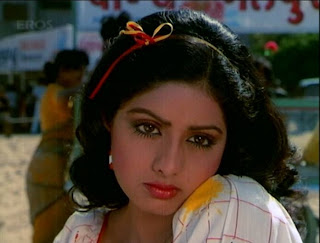 Check out those tarantula lashes
Sridevi lived up to her character's name in this film, she was indeed the Bijli (electricity) in this rather dull movie, Sridevi's comic timing and general cuteness are what stops this movie from being a total bore, just look at the way she carries herself in the picture below its like she knows she's totally in charge of the screen 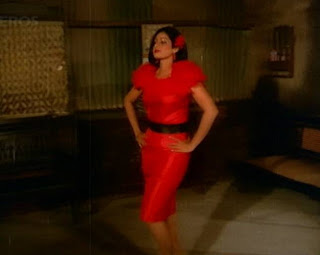 I'm guessing she at this stage of her career she was becoming more confident and it just shows in this film. I couldn't help but feel she was mismatched with Rajesh Roshan, these two won't be winning any Jodi (couple) awards, there wasn't much of a chemistry between them at all 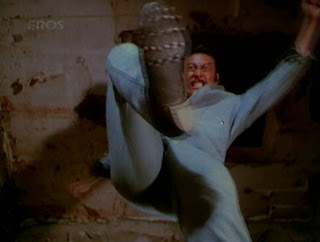 And of course this film is also notorious for Hrithik's fight scenes with Danny, i love the way Danny puts him in his palce in the clip below, such were little Hrithik's guts that he tried attacking Danny, but of course Danny can always be trusted, he wastes no time in demolishing his legs with his spikey boots (catch this hilarious moment in the clip below)
And of course Danny & Rajnikanth spice things up too with their macho campiness, watch this fight clip below where Rajnikanth avenges Hrithik's death
Good songs by Rajesh Roshan, there's a mellow lullaby 'Tujhse pehle' picturised on Rajnikanth, a madrasi style dance number 'chugh gayee chidiya' and the cute 'aaj dil tude (superfast love)' my favourites are 'pehli baar pyar' Sridevi is just so sexy and lovely in this song and
'aaya aaya pyar ka zamana' yes she does look good with Rakesh in this clip but overall their Jodi lacks the excitement and energy she seemed to have with Jeetendra
Paisa Vasool rating: 4/10
Posted by bollywooddeewana at 18:17

You make all these films sound so yummy. But, I guess it will take more than a delectable Sridevi to save these films. ;)

lol Sharmi on finding it rather yummy, its anything but, major disappointment overall, but the songs were good, indeed it would take more that Sridevi to save it, in fact she was the major reason as well as it being Hrithik's first role that made me watch it

An aging (but refusing to admit it) Rakesh Roshan is enough to put me off, but add Rajnikanth to that, and the film becomes a no-see for me! I can't stomach that man! But this film seems to be pretty popular on TV here, I've seen it advertised loads of times.

And I thought Bhagwandada was Dev Anand's film (Dev's film is Swami Dada). I can't remember this one at all. Though she did another Rakesh Roshan movie with Mithun and directed by K. Vishwanath which was very much lauded by the critics. That movie allegedly also brought mithun and sridevi together.

@ dustedoff: how i agree with you!

@ bollywood deewana: the fil which I mentioned before was: Jaag Utha Insaan and it was before Bhagwan Dada

Haha. I love how you follow Sridevi's comic timing bit with rape and suicide. lol!

I never knew that Hrithik did any acting as a child. A glimpse of things to come!

I need to get back into blogland full force. There's still so much to learn!

With the right amount of booze and the right sort of company, I bet this movie would be a hoot.

@ dusted off I agree Rakesh is not at his best here, but for me Rajnikanth is always a guilty pleasure i don't mind indulging in

@ harvey Yes indeed I've heard a lot about jaag Utha inasaan mnd i've been trying to find a copy on dvd with subs, but its almost non existent. You've made me ven more hungry to watch it

@ The Bard You're welcome, little Hrithik definitely added a lot of positives to the viewing experience

@ Amrita You're so right, but i'm usually on my own while watching this flicks most of my friends aren't bollywood fans

I completely second Amrita here. After 2-3 pegs, this movie would be fun if you have few frnds to give you company. I have never been a Rakesh Roshan fan. The only film of his as an actor that I liked were Paraya Dhan and Khatta Meetha .
And neither am I very fond of Hrithik. So I don't see myself watching this movie. But if I ever do it would be only for Danny and Rajnikanth. Silly and total bakwaas, I find Rajni's antics fun at times. I recently saw the dubbed version of Shivaji - The Boss (it's a tamil movie dubbed in Hindi) and had a blast. It was so unbelievable that I can't describe.