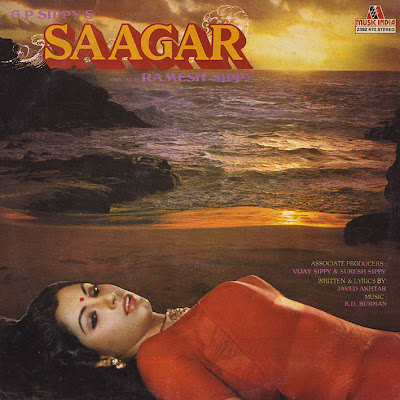 My first contribution towards the ongoing Kapoor Khazana which is going on around some of the bolly blogosphere is this much lauded love Triangle which left me, well we'll see in a minute

Raja (Kamal Hassan) and Mona (Dimple Kapadia) have been friends since Childhood, now that they're grown up Raja finds it hard to express his feelings to Mona 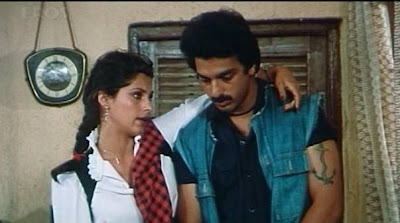 Mona on the other hand is very casual about matters between them, Raja adopts this stance too when in fact matters of his heart are otherwise 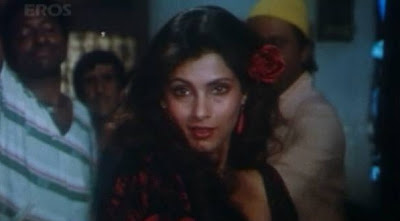 In comes Ravi (Rishi Kapoor) the son of a wealthy industrialist who falls for Mona, he also becomes good friends with Raja 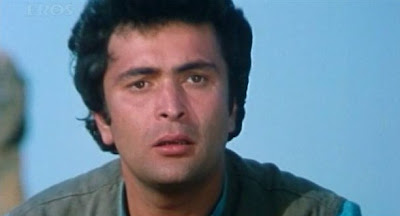 Raja hopes Ravi will help him learn how to be more expressive of his feelings towards Mona, he does this not knowing of Ravi's feeling towards Mona 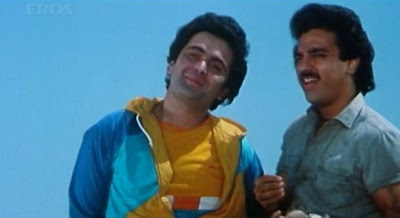 When Ravi finds out about Raja's feelings towards Mona, rather than be upfront that he likes her too, he agrees to do the talking for Raja 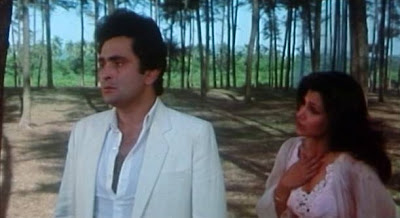 (bollywoodeewana's note: Why Ravi himself could not be upfront about his feelings is way beyond me, senseless self sacrifice all in the name of being buddies I guess)
Ravi lets Mona know about Raja's feelings but then, Raja sees Mona and Ravi cuddling which leads him to deny any feelings when Mona comes to ask how he really feels (perhaps she feels the same, or is confused the film doesn't make this explicitly clear) 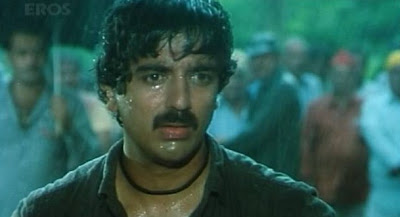 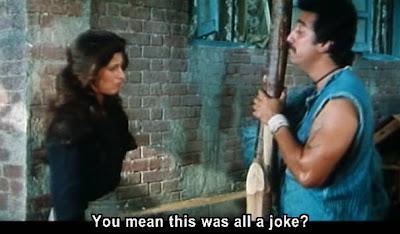 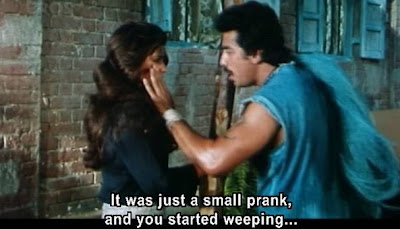 Thus Ravi and Mona start dating until Ravi's wealthy Mother Kamladevi (Madhu jaffrey) decides Mona isn't up scale enough to be her daughter in law, Ravi is having none of it and decides Mona would be his bride 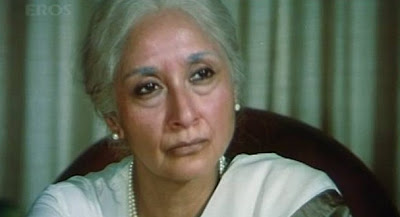 While Ravi is away on a business trip, Kamladevi cuts a deal with Mona to choose either between her son or the livelihood of her local townsfolk, whose businesses she threatens to buy out 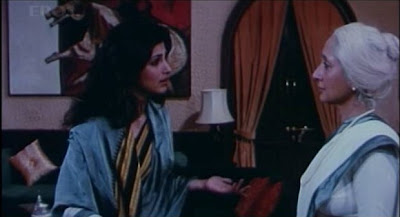 What will Mona do, Will she sacrifice her love for the sake of her townsfolk? Will Raja ever get the girl of his dreams? 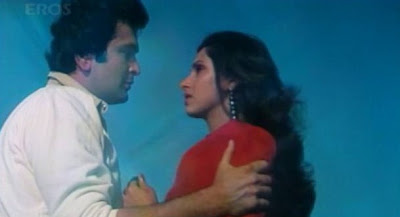 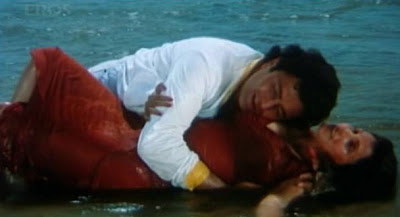 This much lauded classic of course marked the reunion of Raja (Rishi Kapoor) and his Bobby (Dimple Kapadia) who had eloped 12 years earlier in that 1973 classic Bobby, but for me i found it really hard to appreciate this classic say apart from the songs by R.D Burman, I felt zero sympathy for the characters. 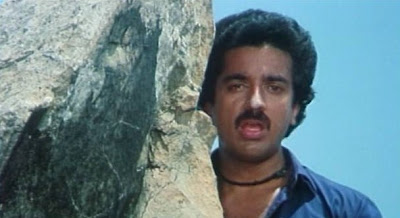 Kamal Hassan's character i found way too pitiful and lacking in conviction especially in the way he dealt with expressing matters of his heart, as well as his deceit when he was confronted by Mona about his feelings. I also could not overlook the ending which in this case, like many other love triangles (see here) someone dies just so the decision making process can be made easier, I'd have liked Saagar even more if the female lead, in this case Mona (Dimple Kapadia) really got to examine her heart and make her choice rather than end up with one of her potential suitors just because the other potential Mr Right was killed off. 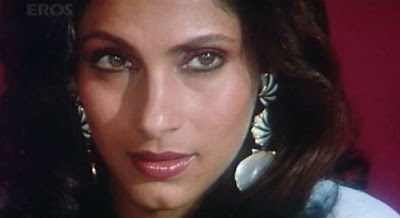 Overall watch Saagar mostly for the songs and then for the actors if you're a fan of anyone here, acting wise everyone puts in a good job but the classic love triangle trope just killed things for me, needless to say I 'd rather Dimple was awarded the Filmfare Best actress award for Zakhmi Aurat where i felt her acting prowess, the same goes for Kamal Hassan who was awarded the Filmfare Best Male actor for his role in this, I'd rather he won it for Ek Duuje ke liye than this
And of course this film is famous for Dimple's towel dropping act which occurs in a blink and you'll miss it second, but pay attention to the rather fabulous dreamy sequence below where the camera just ogles at Dimple
Excellent music from R.D Burman on here with lyrics by Javed Akhtar. Favourites are the lovely 'Chehra hai ya' the fun 'Yunhi gaate Raho' which sees kamal & Rishi get all buddy buddy whilst also doing the can-can with Dimple and the lovely ballad 'Saagar Kinare'. My two favourites on here though are the Goan style wedding song 'Oh Maria'
Saagar - Oh Maria by kandigee
and the oh so seductive 'Jaane do na' where a wet Rishi and Dimple dressed in a wet Ghagra choli blouse and sari roll around seductively on the grass
Paisa Vasool Rating: 5/10
Posted by bollywooddeewana at 15:35

One of my favourite songs from this film was Sach mere yaar hai:

All the others you've listed, too... but yes, the film is pretty avoidable otherwise. And the end was ugh.:-(

Ohh this is a total guilty pleasure for me, i can't appreciate the film properly due all the lying and sacrificing. But I thought all 3 of them made the best out of a shoddy story. Rishi looked so weirdly sexy, and Dimple and him had such great chemistry together!

You have a nice blog. I am a Bollywood movie fan and a blogger. I would like to exchange links with you. Thanks. (I have added your link in my blogroll)

All of them looked good in it but I didn't find the movie all that great - felt it was over-hyped. I just blame the decade, as I'm not very fond of the movies made in 80's ;-)
But the songs are great. I like Sach mere yaar hai and Oh maria the best.

Strangely I've never watched this film in totality. And now you give me enuf reason to continue with my evasion! ;)

@ The Bard Yes i guess so too, but the ending as with many other love triangle movies that end in the same way left me cold

@ Dusted off Indeed i actually thought I'd leave taht song for prospective viewerts of the movie, it is indeed lovely I love SP's voice a lot

@ Rum True word there, I'd have liked it more if they were open and if the ending had more guts

@ Anand Thanks for your kind words

@ Sunehri This is one hyped classic for sure, and yes I know how a lot of people feel about movies from the 80's but i love a great deal of 80's movies, they had a certain style o their own no matter how overbearing they might be

@ Sharmi The songs are gorgeous but perhaps for a bit of hindi film history or to see what the hype was about or in fact for a different perspective, do check it out.

Very nice and impressive music by Panchamda aka Hon R D Burman Sir but Panchamda had never been rewarded for such heavenly music. Very Sad.

Filmfare Awards have been distributed without seeing the quality especially for music.