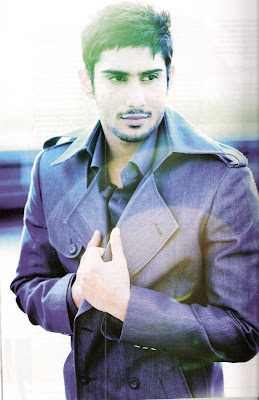 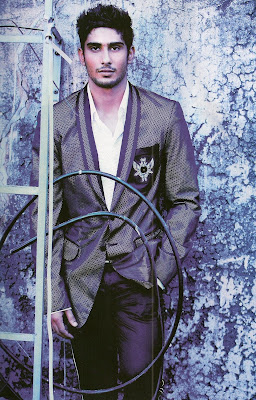 Ok so i had to give a little shout out to my Man crush of the moment Prateik Babbar, gosh! look at that super gorgeous face, he's handsome in a smoky dark kind of way, some of you might remember him as Amit from Jaane Tu Ya Jaane Na, although he had a small role in the film he got a Filmfare Jury certificate for his notable and distinctive performance 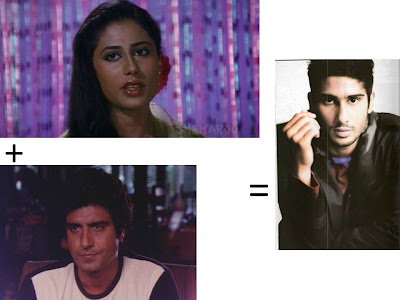 Prateik as some of you may know, is the love child of legendary Bollywood actress Smita Patil and bollywood actor Raj Babbar. He stars in Kiran Rao's (Aamir Khan's wife) forthcoming film Dhobhi Gaat, given his performance in JTYJN and the fact that he's Smita's son (we're sure he's inherited some of her acting genes), its for these reasons that we think Prateik has a massive and well accomplished career ahead of him and of course he's major eye candy as well. So what do we think of Prateik People is he Hot or Not

Prateik Pictures: Courtesy of Filmfare Magazine Scans
P.s. Prateik if you happen to be in London sometime send me an e-mail, i'll be more than happy to show you around ;0)
Posted by bollywooddeewana at 11:45

Email ThisBlogThis!Share to TwitterShare to FacebookShare to Pinterest
Labels: Hotness, Man Crush, Ones to watch out for, Prateik Babbar

HAHA i just lol'd at the title of this post! I was hoping for some bromantic screencaps but was pleasantly surprised with the HAWT pictures of Prateik! He is smokin and he looks just like his mum, and hopefully will posess her acting talent too! As he was great in Jaane Tu Ya Jaane Na!

Lol Rum glad you lol'd at the title i myself kept laughing to myself over and over and Yeah i hope so too, he seems like a really really nice guy, i hope Kiran taps into his full potential and brings the best out of him

He's quite handsome, and I liked his performance a lot in Jaane Tu Ya Jaane Na even though it wasn't a huge part.

I've never seen any of his mother's films...have any recommendations? I've read a lot of people say that Chitrangada Singh from Hazaaron Khwaishein Aisi looks a lot like her and that's how I first heard of Smita.

I get the Jessica Alba thing a lot...I've never been able to see any resemblance though =).

okay, do tell. What's the title translate to?

Anyway, I'd rate in the high spectrum of the hotness scale. Prateik is definitely worthy of any crush, man or otherwise!

@ Tiff i haven't seen too much of her work but if you do like Arty cinema (Smita did a lot of these) i'd recommend Bhumika & Mirch Masala. For an outright emotional drama look no further than Arth 1982 heres a review of the film

@ Shell the title translates to I'm a man and i'm in love with a man.

He is crush worthy for anyone indeed ;0)

At first glance, I thought he was Sameer Dattani/Dhyan. He's nice-looking, but I'd have to see him in action before making a final verdict.

ROFL to the title of the post. :-D agree, given some female genes in all of us (men) its but natural to drool for man sometimes, hai na?

I too find him hot, even in tht lazy grungy look of JTYJN. He was gr8 innit, and sure wud b good as a dhobi :)

@ lapetitediva i'm sure you won't be disappointed

@ It sure is darshit ;0) i never drool over anyone but there's something about Prateik, perhaps its that lazy quite aggresive grungy look i don't know. i Haven't seen Mirch Masla but i'm definitely on the look out

@ Goldbeauty tahnks for stopping by, Prateik must be smiling from all this fan love ;o)

Smoky sexy darkly handsome!!!He is very attractive, I had a crush on him as well when I saw JTYJN. He did leave a mark with his performance in it even though he had such a small role.
Hope he makes it big in the industry!

And the Title of the post is better than Prateik's pics :P
Can't help laughing!!! :-D

@ Sunehriyaadein I hope he makes it big as well, glad you found my title funny i couldn't help but laugh as well as i was typing it up