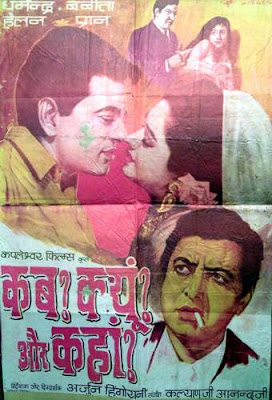 This is one of the movies directed by Arjun Hingorani who i believe pioneered the idea of numerolgy in film titles, going by his imdb profile he appears to have made lots of films with 3k's, Kab? Kyoon? aur Kahan? (When? Why? and Where?) being the first in the bunch. Of course this trend was to be repeated later by Karan Johar who kad K's in almost all his film titles from Kuch Kuch Hota Hai to Kabhie Khushi Kabhie Gham, Kal Ho Na Ho etc.

The movie starts with a plotted car crash & then asks us in a loud voice Kab? Kyoon? aur Kahan?(When? Why? and Where?)

Anand (Dharmendra) and Asha (Babita) are both passengers on a cruise ship, she's annoyed she has to share a room with him, but after he sings to her and rescues her from a goon who had made a pass at her, she falls for him 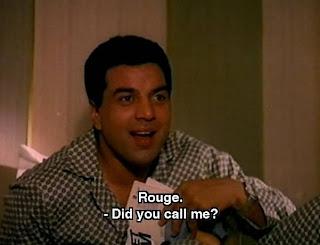 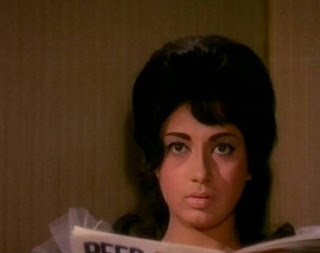 When he gets back to India, Inspector Anand is appointed the case of Jagdish Raj who happens to be Asha's father, the commissioner of police believes his car has been tampered with and thus assigns Anand to investigate fully 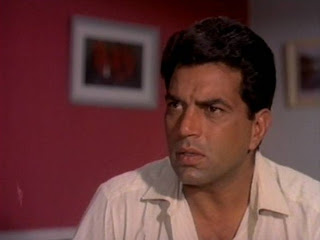 When Asha learns of her dad's death she's shocked and she finds solace in Anand, her uncle Daljeet (Pran) however is unhappy about their relationship 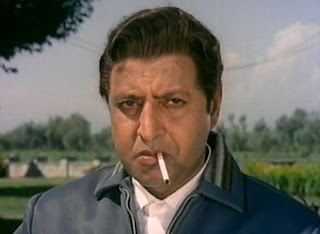 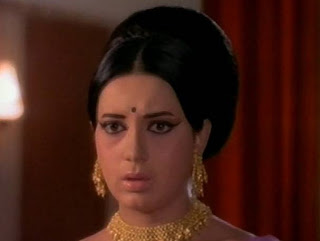 While in Kashmir Daljeet tries to kill Asha by drugging her tea and then sending her on a boat ride, luckily Asha had asked Anand to join her in Kashmir and he's able to rescue her 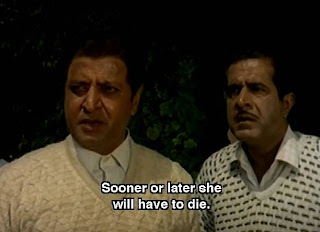 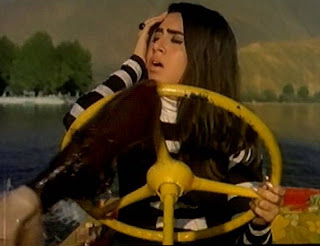 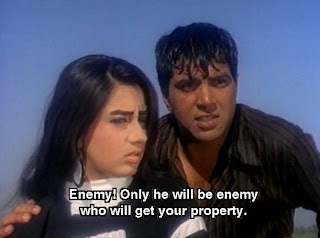 When they return to Bombay Daljeet takes a liking to Asha's friend Lata and tries to rape her,
Asha tries to help by setting the dog on him but he shoots the dog, Asha then manages to get the gun off him but he's still violent, she then shoots him 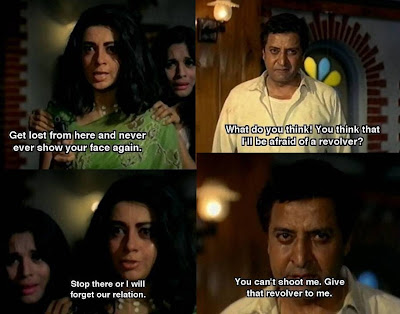 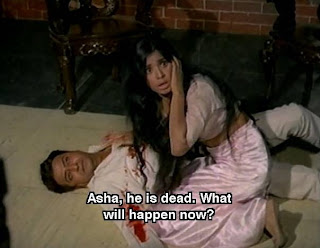 they both put Daljeet's body in a rather large box (talk about subtlety) and drive to dispose the body,On the way they are stopped by cops, who wants to search them but then when he realises she's the daughter of the wealthy deceased Jagdish Raj , he lets them go, and they dump the box with the body in a stream 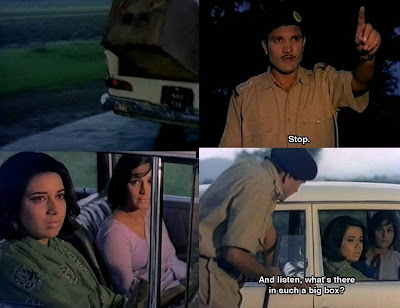 Following the disposal of the body, Asha becomes restless and apparitions of Daljeet start appearing to her, Asha is paranoid but still keeps her deed a secret from Anand 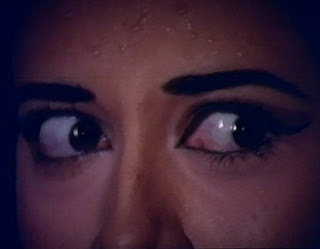 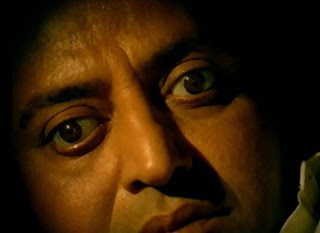 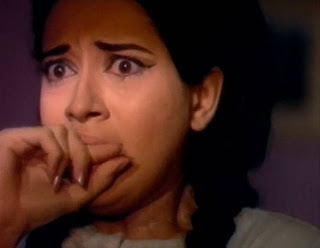 Will Asha ever reveal her deeds to Anand? Will Anand ever find out who killed Asha's father? What are the strange apparition's Asha is seeing, is she mentally disturbed or was it alla dream? Watch Kab? Kyoon? Aur Kahan? to find out

Kab? Kyoon? Aur Kahan? falls into the fun escapist movies made in the '70's there's a good suspense element with a dash of sweet romance and some action from Garam Dharam, i really enjoyed this and i really didn't see the twist at the end coming

Dharmendra was so handsome, romantic and sexy as Inspector Anand. Daddy's girl i've added some pictures for you to feast on, i kept thinking about your love for Garam Dharam while watching this 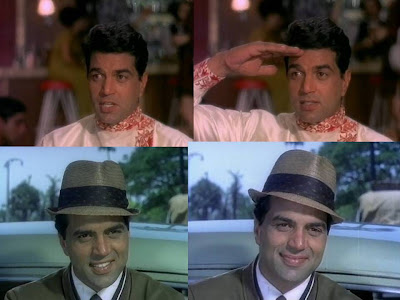 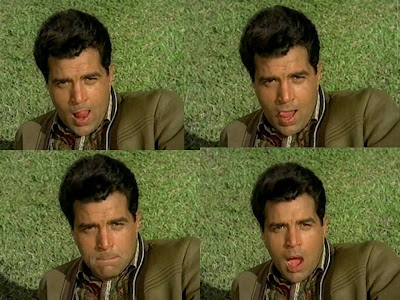 Babita who wasn't really taken seriously as other lead actresses of her times gives a fine performance, gosh! Karisma looks so much like her 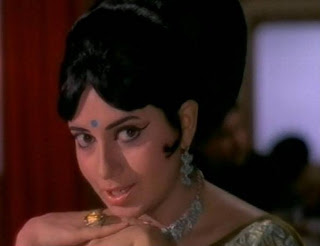 The great Pran was at his evilest best as the greedy uncle, I loved him in this in fact i love Pran in everything, he always adds his midas touch to whatever he sets his hand to 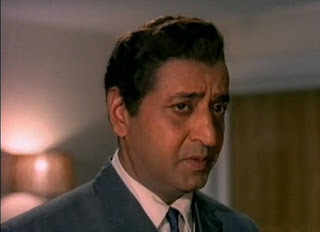 And the fabulous Helen appears in a mini role as the baddies informant, she also gives us a great dance 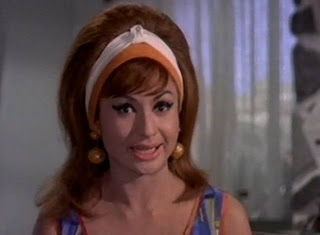 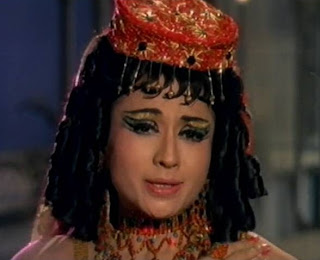 The music by the funky Kalyandji Anandji is superb (i'm trying not to use fabulous.. lol) the romantic 'dil to dil hai' (watch the hilarious moments between Dharmendra and Babita's dog at the start of the song) and the catchy 'Ye aakhen jhuki jhuki' which is sure to get you moving (can anyone please identify the woman dancing with Helen in the song) the sweet 'Pyar se dil bhar de' and the melodious Ho gaye, tere ho gaye

Total Score: 7/10 ( Fun playful Suspense Thriller with a sweet dash of romance)
Posted by bollywooddeewana at 10:34

Babita without a wig?!!!! Now thats somethings I've never seen before. She does look a lot like Karishma (it should probably be the other way round!). I thought I'd seen most of Dharmendra's late 60s and early 70s stuff, but I'd never heard of this one. It sounds great. I need to find it ASAP!

I now regret not buying this when it was only $4 at Nehaflix.

Babita looks so eerily similiar to the early to mid 90s version of Karishma, I've had to remind myself that no, that isn't Lolo, that's her mom.

Lovely, I saw this movie during the 70s. I remember being frightened by during the scenes when Babita is racked by the guilt of killing Pran. How willanous were the villain's then.

Saw this a couple of years back. Not in the same league as the more well-known thrillers like Teesri Manzil or Gumnaam, but definitely deserves to be better known, IMHO. Dharmendra is awesome, the songs are good, and I didn't see the twist coming at the end either!

LOL! Very, very, VERY yummy indeed, bollywoodddeewana! Thank you - you've totally made my day! I have this huge, goofy grin on my face right now.

I have never heard of this one but I HAVE to see it - Garam Dharam, Helen AND the Pran-tastic one!!

@ Bollyviewer, its a fun film in that '70's kinda way i'm sure you'll like it, was she notorious for wearing wigs

@Lapetite diva i so agreee, i first saw her in Farz and in that Karisma looks so much like her

@ Avdi They sure don't make them like they used to, Villain's aren't as cool and scary as they used to be

@ Daddy's girl you're welcome i knew i had to get you those screen caps when i saw them, i have my eyes out now whenever i'm watching a Dharmendra film :0)