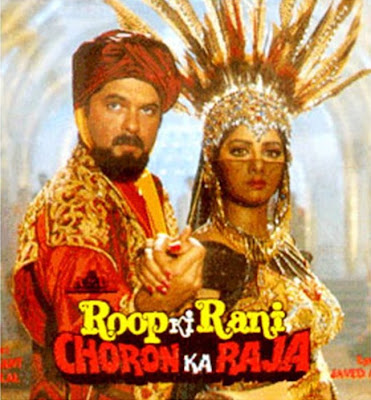 This film has the dubious title/honour of being one of the most expensive Hindi movies ever made, the honour still remains somewhat true till this day. Roop Ki Rani Choron ka Raja (Beauty Queen and the King of Thieves) flopped and lost Anil Kapoor who had invested heavily in the movie a lot of money. So why did this movie flop, i mean a lot had gone into producing it

Evil Jugray (Anupam Kher) kills Ramesh (Anil Kapoor) & Seema's (SriDevi) dad, the two kids meet in an orphanage and Ramesh promises that when he grows up he will avenge the deaths of their fathers by killing Jugraj

Do i look Evil? 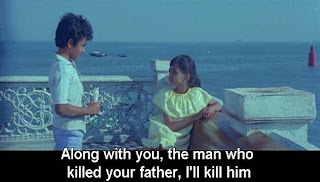 Seema then gets adopted by a new family and Ramesh leaves the orphanage with the hope of finding Seema, he's picked up by a gangster Girduari (Paresh Rawal) who trains him up to be a highly wanted thief

Ramesh the most wanted thief

Ravi ( Jackie Shroff) Ramesh's long lost brother is now a cop and is set on catching Ramesh, they both don't know they're brothers

After a long separation since their childhood, ramesh and Seema meet at a a function where they both plan to steal a necklace, Seema manages to get it and then puts it in Ramesh's pocket, he gets a way with it

One day during a chase by some men she had robbed she meets Jugraj who offers to protect her, in return she must help him persuade Ramesh to help him get the scerets to the location of diamonds he wants. Seema doesn't know that Jugraj is the man who murdered her father

Ramesh and Seema soon discover each other as the kids who had sworn to avenge their father's killer, and thus the search is on to find and destroy him

Will they be successful in their attempts? Will they succeed in killing him? Will Ravi realise the thief he is after is his long lost brother? For these and many more annoying reasons Watch Roop Ki Rani Choron ka Raja to find out

As i've said this film was billed as the most expensive in India at its time, so what could have made it so expensive

or Sridevi as a chinese woman

the entrance to the villain's den

Could it have been one of the many zillion of outfits/costumes Sridevi wore?

Could it have been the glow in the dark Violin players?

Overall this film was somewhat fun but way too silly for '90's standards, add to that hammy editing and a tediously long film, while i'm used to the standard masala fare of 3+ hours this one seemed overstretched & padded with unnecessary scenes

The movie also seemed to have copied bits and bobs from other bollywood movies, for example the scene where Bindu gets her necklace stolen is very similar to that in Shaan (1980) where the same thing happens

If you're Sridevi lover, which i am, there's lots of her in this one Happy Sridevi, Sad Sridevi, madrasi Sridevi, Chinese Sridevi etc. Although she's let down by the script she gives a somewhat enjoyable performance

Ramesh the most wanted thief vogues for the camera

The music by Lamikant Pyarelal whom i adore i found to be very average stand out tracks for me were Jaanewala zara rukh jao which sounds like its trying so bad to be the karte nahin kat te number from Mr India, the somewhat catchy title track 'Roop ki Rani choron ka raja' and the chinese pop sounding Bacha tuje mein which is my favourite with Anil Kapoor as African tenga and Sridevi as Miss China Chini of Chinc poki (what the hell was the director on???)


Total Score: 4/10 (A Somewhat fun but way too silly & tiring movie)
Posted by bollywooddeewana at 09:00

I think I saw this on a local cable, absolutely the worst way to watch a movie. It was so boring and longwinded.

Absolutely silly. I think it was a big dud when it released? The TV channels keep playing it very frequently though. Who watches it!?

I love Anil Kapoor, for some strange reason, but I have noticed that a lot of his movies are like stuff from the previous era. Nayak: the Real Hero is absolutely adorable, but if you aren't in to 90s-style plot elements, it won't do it for you...looks like this movie is the same!

I just want to see it for the costumes--Sridevi's purple one is pretty popular in my Bollywood books. :)

I remember seeing this, but hating it because it was so idiotic. Frankly, the only thing that's really stuck with me all these years is that song, Bijli giraane main hoon aayi... it was from this film, right? Sridevi in lots of gold...

I'm almost tempted to find this just to see how ridiculous it really is!

Do you think Anil and Sridevi look back at this once and cringe with embarrasment? I could barely recognize him in his African costume.

Also, Anupam Kher looks like someone else in the pic with the ax - I can't quite put my finger on it. I'm thinking an American character actor. Hmm, this is going to bug me now.

Sounds like I was lucky to have missed watching this! I remember seeing one of the songs from this on TV a lot - Dushman dil ka jo hai mere - which got stuck in my head for ages (much to my annoyance!).

@Bhargav indeed it was big dud at the box office, its one of the greatest flops in hindi cinema history i heard

@BB i love Anil as well moreso his movies from the '80's though. I've heard nayak won him lots of respect, i might just watch it for that reason

@ Dusted off the 'bijli giranne mainhoon aayi' song is actually from the Hawai Hawaii number in Mr India
http://www.youtube.com/watch?v=7qCLmd6Maag

@Bollywoodfan i guess being preteen might have had something to do with it if i'm to go by your tastes now taht is, i cna imagine i would have found it exciting as well if i was preteen or in fact in my early teens

@Shell I'm sure they do, it would be funny to see their reaction is someone played it back to them on a tv show like Koffee with karan for example


@ Bollyviewer none of the songs save the chinese pop sounding one that i've embedded and 'Roop ki rani choron ka raja' are the only memorable ones. This is definitely one of Laxmikant Pyarelal's weakest work

Hey, Sri Devi. In my childhood favorite movie. Loved it.

Just watched it and it was AWFUL. And I think Sridevi was just terrible in the "comic" scenes. Not really her fault though, i think the director made her.... and she overdid it to the fullest.

@ Gaja Gamini yes she was on full ham mode here but its what the role demanded of her, I saw her in Lamhe last week and i have nothing but the utmost respect for her as an actress (I always have anyway)

It Was amazing performance by all the people, why people didn't like it. Was it too lenthy, Didn't people watch muhabaten? Songs were mind blowing, I would like to thank Satish Kaushik for giving us a picture like this.... You can say script could people not like, but Can anyone make a better film from that script which team has done....