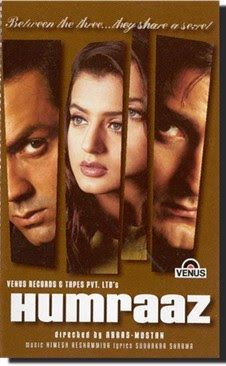 After giving us a hollywood/bollywood taste of Disclosure with Aitraaz, my favourite director duo Abbas Mustan strike again in this entertaining suspense drama. Humraaz (our secret) is said to have been inspired by Dial M for Murder which i'm yet to see, however i did enjoy this colourful suspense thriller

Karan (Akshay Khanna) and Priya (Amisha Patel) are a couple, they're also dance instructors hoping to make it big

Priya believes they can make it so does Karan, they hope their dance troupe will be selected for as the major healiners for a ship cruise

Priya meets Raj during a dogchase on the cruise, Raj takes a liking to her

The two start dating and Karan starts getting Jealous

Raj asks for Priya's hand in marriage and she agrees, however its a plot to trap Raj, Raj and Priya had planned this all along in order to kill Raj and then inherit his property

Raj and priya get married and on the wedding night she refuses Raj sex asking him to wait for a month, a kind Raj agrees

(Hell no, after a lifelong of waiting there's no way i'll give in to this kind of demand one night is fine but one whole month hell no..Lol)

Will she give in to karan's demands? Will Raj take matters into his own hands? Will Raj ever come to know of Priya and Karan's schemes? Watch Humraaz to find out

This is a well placed suspense movie from Abbas Mustan, the suspense is introduced when least expected and generally keeps with the pace of the story, Humraaz is totally enjoyable but a minor downer for me came with the masalaish fighting end

Humraaz is also helped with great acting from all its stars

Bobby was fantastic as Raj Singhania, i loved his performance in this and i guess this is my best Bobby movie so far his character as Raj also provided me with my favourite Hindi film dialogue Tum aashiq nahin, talal, talal hai (you're not a love rather you're a pimp, a pimp)..LOL

I loved Amisha in this, what happened to her, She was bollywood's sweet girl around this time as she was riding high on the success of Kaho naa pyar hai and Gadar.. Ek Prem Katha, she was great in this and her character even though she resorts a bit to the atypical damsel in distress towards the end, her character is well etched out, and she looked utterly gorgeous 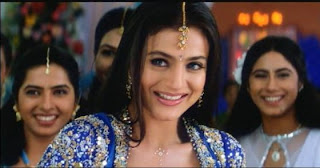 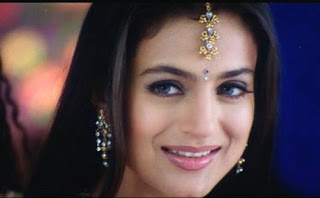 Ahh Akshay Khanna he was fantastic in this, so evil so cunning and soo sexy

i love his funky shirt

Great Music by Himmesh Reshammiya ( i love this soundtrack a lot), from the earworm worthy 'Bardasht nahin ka sakhta' ( i love this song soooo much), the mellow grooves of 'Pyar kar' where Akshay gets to pull some funky moves to the romantic sweet sounds of 'Dil ne ka liya' the breezy sexy sounds of 'Sanam mere humraaz' and the very upbeat 'Life ban jayegi' which is sure to get any true blooded bollywood party rocking

Humraaz is available on Youtube with English subtitles in 19 parts

BUY DVD
Posted by bollywooddeewana at 08:41

Humraaz was pretty good as a 'commercial thriller', But really, these Abbas-Mustan movies make no sense whatsoever.

I have lots to agree with you on this one! Akshay Khanna is as usual yum, Bardaasht nahin kar sakta is a great song, and this is definitely my favourite Bobby Deol film - I'm not much of a fan, but I liked him in this. The end could've been done much better, but I like the sudden twists and turns in the plot (for instance, when the Amisha character goes to tell Akshay that she's engaged to Bobby). Entertaining film!

As soon as I saw the poster I knew it had to be from Abbas-Mustan. It definitely sounds like a movie with potential. First of all, I would go so far to actually say that Bobby Deol actually looks handsome in this one (a rarity for me). I'm not a huge Akshay Khanna fan, but I think he plays the negative role pretty good. Maybe this would be the movie that Amisha would leave a lasting impression on me (while doing my review for Mangal Pandey, I totally forgot I'd just seen her in Kaho Naa Pyaar Hai). I'll be sure to look for this one in Netflix.

@ Dusted off Indeed the ending was a downer for me,it could have been slicker and yay a Himmesh song you actually like :0)

@ Shell Do get it if you can i enjoyed it, seems you're a bit of A Abbas Mustan lover like me

@ Darshit Indeed his music was fab and i really don't think his singing is that bad, i'm a fan although i agree singing isn't his strongest point nor is acting

Lol at the next Anu Malik sdtk being called bobbykalobby :0)

I will indeed check Naqaab out, thanks for recommending it

Can some one tell me name of the character angels?

Can some one tell me name of the character angels?