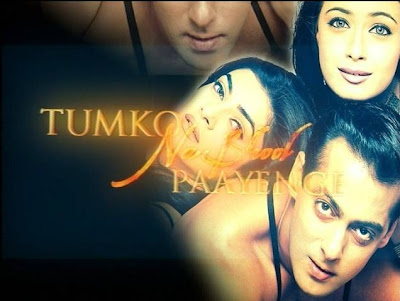 Plans are made for their marriage, soon after Veer starts getting weird visions and apparitions, leading everyone to panic and worry about him

Following an attack by gang memebers on the day of the wedding, Veer surprisingly manages to fight them all

Thakur Kunal reveals to him that they're not his real parents, and that they had picked him up when they had gone to distribute their dead son's ashes by the river

Veer is eager to find out who he is and heads off to Mumbai. Following an encounter with a pickpocket and other events in Mumbai he soon finds out his real name is Ali

He then remebers his girlfriend Mehek (Sushmita Sen)

and his younger brothers Inder and Azad

What will be his fate? Will he be able to explain his actions? How would Veer now Ali resolve his love relationship with Muskaan whom he had left behind at the village and Mahek his girlfriend in Bombay? Who shot him and how did he end up by the river? Watch Tumko Na Bhool Payenge (I can't forget you)

Of course some of you might have noticed that this film has some shades of Bourne Identity and The long Kiss Goodnight to it, as i haven't seen both movies in ages i don't know much or to what extent it rips them off

Tumko Na Bhool Payenge is enjoyable though, it could have been edited better and Salman's acting is laughable in some scenes

Incoherencies also abound, like how the hell did Veer get shot five times and even fall into a river without dying, anyway this film is still enjoyable and is nothing but 21st century masala for the masses, the story or the main plot takes a full hour or more than to set but i guess the director wanted to give audiences their full taste of Romance/action/naach gaana

Lots of shirtless Salman Moments abound, so if you're after eyecandy you'll get your money's worth

I was also impressed by Inder Kumar this is my first film with him in, he was impressive

Also added to the mix was Hot Cop Mukesh Rishi

Fab music too by Daboo Malik/Sajid Wajid i don't know how they worked it out amongst themselves but i liked them all, there's the fun wedding song 'Mehndi Hai Lagi' the mellow rhythms of the title track 'yeh bekhudi deewangi' a Eid celebratory song 'Mubarak eid Mubarak' the groovy rhythms of 'Kyon khanke teri choodi' and the earworm worthy 'bindiya chamkegi'

Tumko Na Bhool Paayenge is available on Youtube with English Subtitles in 18 Parts
Posted by bollywooddeewana at 10:51

Only a 5.5? I liked it. I would give it a 7. Sallu is really good. The girls were wasted but good at what was given to them. The movie rips off The Long Kiss Goodnight.

I will probably never end up seeing this (since I find it hard to bear Salman Khan - and yes, that screen cap with him crying makes me want to crack up with laughter too!). But at least it's a change from the reincarnation theme - when I first began reading your post and there was that bit about flashbacks and bullet wounds, I thought "Not another Karz or Om Shanti Om! If for nothing else, for that I just might give this a shot. Comes on TV fairly often.

Isnt the name, Tumko Naa Bhool Payenge? Or was it just the song?

Nicki i actually meant to give it a six, that was my original score. Sallu was likable but i found him a bit a hammy in a few scenes but i did enjoy the movie overall

@ dustedoff I would say give it a dekho if it comes on Tv, its enjoyable

@ Avdi it is indeed an enjoyable masala, the movie is indeed Tumko na bhool paayenge thanks a lot for correcting me on that

well, i m also curious about this movie that what it is all about. I still haven't got to see it. But I love its music. The one you forgot, 'Kya hua tujhe' - Sallu and Sush has perfect chemistry :)

Yes indeed i forgot taht one its a good song, get to see it if you get the chance its an enjoyable masala