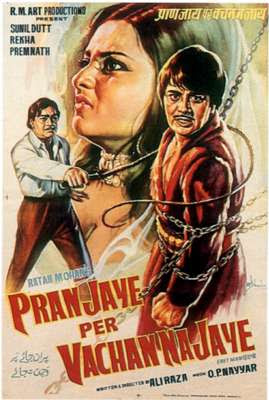 I'm not familiar with many of the dacoit movies produced in 60's-70's bollywood, Pran Jaye Par Vachan Na Jaye (Lay down your life if needed for fulfilling your promise) is among the last few ones produced in the 70's i think, i bought it out of curiosity and i ended up loving it so much. I've watched it twice since buying ( trust me, that's a big deal as i only have time to watch most movies once due to the insane amount of movies i have to get through) So anyway we have a dashing Sunil Dutt as the daku and a young Rekha as the feisty courtesan Janiya as well as superb music by O.P. Nayyar

Raj Thakur (Sunil Dutt) is a dacoit who believes and fights for the safety of the oppressed and women in his village. When he calls the local courtesan Janiya a naachnewale she gives up her dancing and rumours spread all through the region of him being married to Janiya (Rekha) 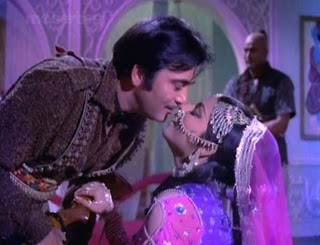 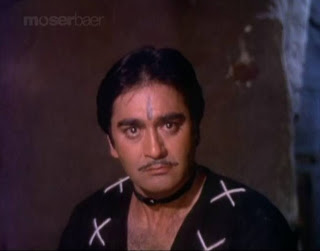 Janiya however isn't a courtesan entirely by choice, she had been kidnapped from her father by her wicked uncle (Madan Puri) and then sold to Chanda a pimp who then raised her up as a courtesan 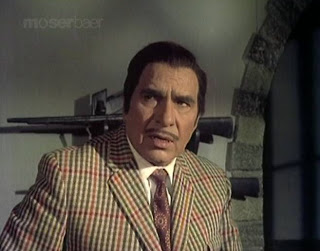 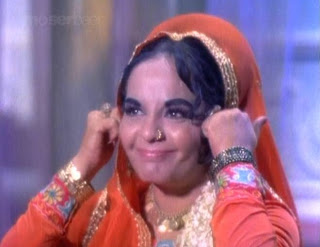 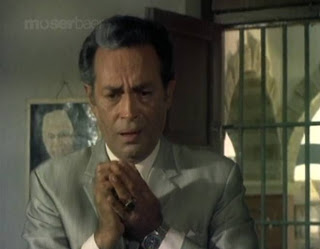 Dhanraj rushes to the town to meet his supposed daughter, but by the time he gets there she has been captured by Raj Thakur who hopes to get her married so his name can be cleared. He falls in love with her but he is unable to admit his feelings to himself. Things take a turn when police gatecrash the weddding preparations and Raja Thakur escapes with Janiya 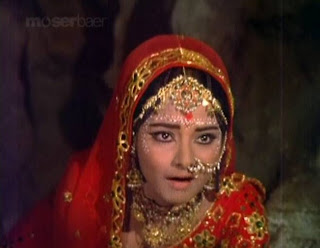 When Sheetal's father finds out she's been captured by Raja Thakur he approaches Raja Thakur's mother for help, asking her to help persuade her son to give him back his daughter 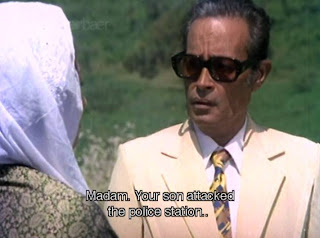 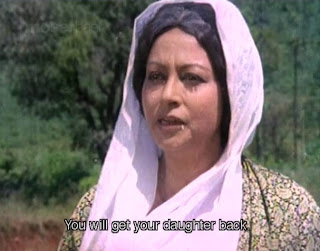 Raj Thakur obeys his mother and hands Janiya over to her, just when her father is about to meet his daughter, she's kidnapped by Mangal Singh's (Premnath) henchmen. 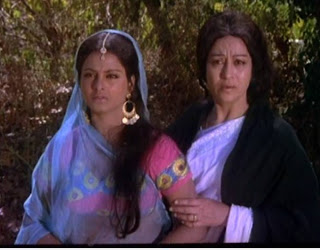 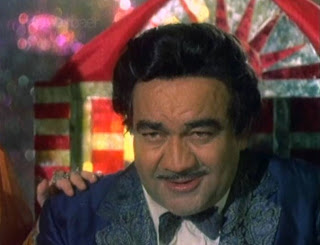 Raj's mum is injured during the kidnap and when he finally his dying mother, she makes him promise to reunite Janiya back to her father 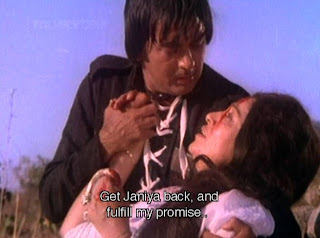 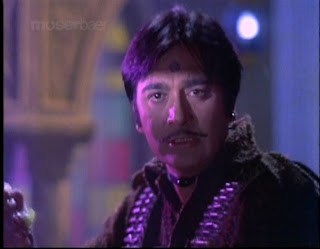 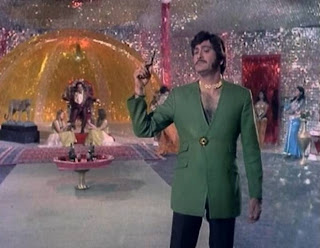 i want that green jacket in my wardrobe 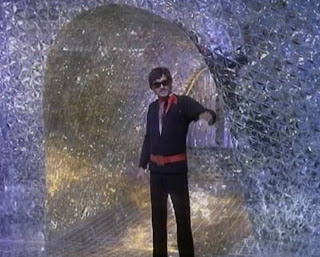 A villain's den that looks so much like a discotheque 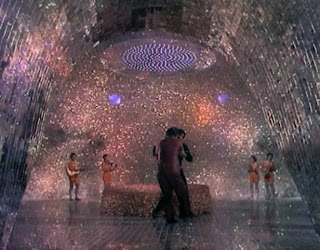 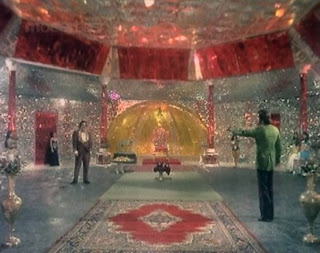 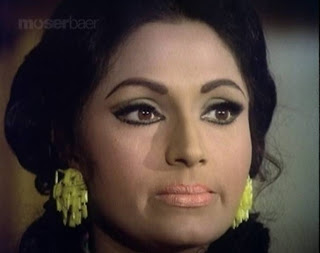 Will he be able to rescue Janiya? What obstacles will he face?

Overall a fun masala-ish flick, attempting to highlight the humanity/kindness of dacoits, at the heart of the film is the somewhat atypical message which became quite popular in a number of dacoit films trying to show dacoits as humans with emotions too, much like the 1963 Sunil Dutt starrer Mujhe Jeene Do (someone please put this on dvd with subtitles)

the film makes us believe Raja is a dacoit not by chance but as result of Raja witnessing his fathers death on the hands of Loan Sharks, Raja grows up robbing and helping the oppressed as a result of the materialist greed which had casued his father's death

Enjoyable performances from all the cast, Sunil Dutt is one of my favourite actors and he delivers a highly watchcable camp act in this, and what a transformation Rekha later went through, i had to do a double take to ensure it was really her 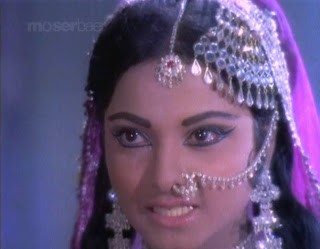 Great music from O.P Nayyar i had long heard of the wonders or should i say magic of O.P Nayyar but this was the film that brought it home for me, Asha Bhosle sang all the songs in this, from the super hot mujra 'Ek tu na piya' the seductive 'Aapke dard jawan hai', the cabaret-esque 'dekho are dilbar' and the beautiful ballad 'chain se humko kabhie' (audio only) which wasn't picturised in the film itself for some reason, the song won Asha Bhosle her 6th Filmfare 'Best female playback award'

BUY DVD
Posted by bollywooddeewana at 11:54

I so love Chain se humko kabhi... beautiful song! Have never seen Praan Jaaye par Vachan na Jaaye, though I sort of knew it was about dacoits. Sounds like good 'time pass'! :-)

That villain's lair is classic! Do you get the feeling that if they stared at the ceiling long enough they'd end up hypnotized? ;-)

lol ajnabi, I love the lair. There's really something about villian's lairs that is so 70's. I think more movies should have lairs nowadays for all types of bad guys. Then even the worst movie would have something worth remembering.

@ dustedoff it is indeed, chain se kumko kabhi is so beautiful i wondere why it wasn't picturised in the film

@ ajnabi LOL one would indeeed be hypnotised

Gosh! What a lot of kidnapping poor Rekha seems to have endured here! And does anybody lose their pran (life) in keeping their vachan (promise) as the title seems to indicate?

This seems like a lot of camp fun in the best of 70s masala tradition, great costumes (love Sunil Dutt's costumes, especially his kurta in the second song you've embedded) villain lairs and all the daaku-drama (as memsaab calls it). I LOVE Chain se humko kabhi and have always wondered about the movie it was from. Too bad it isnt actually in the film.

I love Chain se humko kabhi. It is a lovely composition. But the other songs were dhansu too, ik tu hai piya.

That shiny cave is really fab.

@ bollyviewer indeed she went thru a fair bit as well as cruel treatments from Premnath and yup someone does indeed lose their Pran but not in the way you might be thinking, all in all camp fun daaku drama

@ Avdi its sucha beautiful song right, and to repeat myself what a pity it wasn't included in the film, and indeed that shiny cave is superwow, i wouldn't mind going into a den of wicked deeds like that ;0)

Nice review..like reading ur reviews, systematic and gives a good idea of the film. The star cast for the film is definitely impressive...will catch it whenever possible.

Thanks for the kind words Vandana

I would like to do this movie. My producer samir sir has convinced me to do this film which will be shot at phukhet. 2 Cabaret dance will be added and a full nude bathing scene. Film will be in Thai language only. Waiting for the film to start shooting. Bye. MUMU.