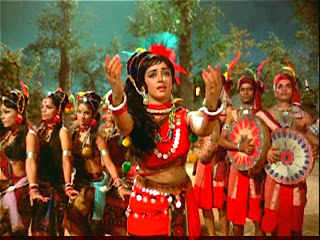 The Tribal Chic look is one i've come across while watching quite a lot of 60's-70's bollywood movies, at first i thought it was some costume thingy made up by bollywood, turns out i was quite wrong and there are actually people who wear such outfits in some parts of India.

The look usually consist of a diagonally draped fabric with lots of colourful accessories worn in the hair, neck, ankles and wrists, they 're normally worn during a huge colourful Tribal song/dance number like this one here

After seeing the look a number of times, i'm putting it to the test. Which of the female actresses below wore it best, is it 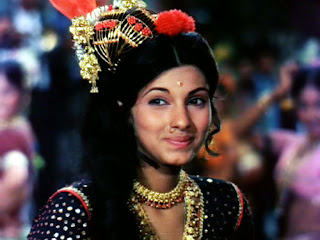 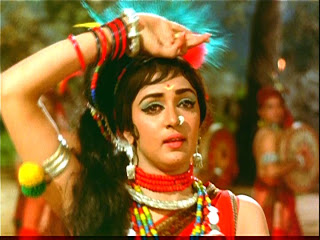 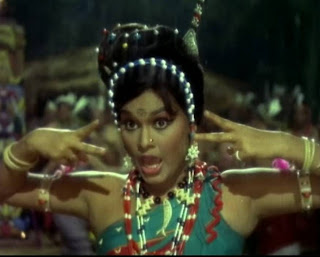 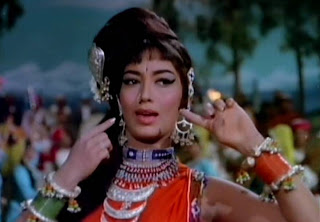 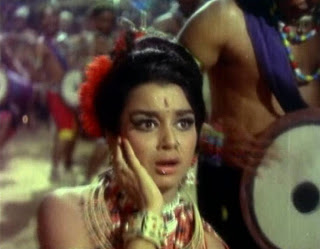 Who deserves the to be crowned the 'Queen of Tribal fashion'
Posted by bollywooddeewana at 00:50

I vote for Hema Malini! :D

That's a tough one. they all looked so elaborately decked out. If I had to choose just one I guess it would have to be Hema or Sadhana.

Definitely Bela Bose. She has a more exotic look than the others.

If I had write-in vote, I'd use it for Helen in Preetam's "Hum Bhi Shikari." :-D

They all look gorgeous. And many other ladies who chose to wear it.

They all look gorgeous, but I think Bela Bose is the one who actually looks most tribal.

Such outfits, made up of a saree or ghagra-choli-dupatta (skirt, blouse and stole) do exist in real life, but the color and richness is pure Bollywood!

I'd vote for Bela Bose too - she looks most authentic!

The sari or the ghagra-choli-dupatta ensemble bollyviewer mentions is, by the way, more to be seen amongst the tribals of peninsular India. In the Himalayas or in the North East states, for instance, tribals may wear very different (but often extremely eyecatching) clothing.

Have a look at this, I think they look so beautiful!:

Great example, dustedoff. I'd completely forgotten about the North East tribals and their eye-catching finery. So, Bollywood tribals are a mix of tribles from middle-India and North-east India, then! :-)

Thanks everyone, looks like Bela Bose got the most votes, hence she's our Oueen of tribnal fashion

@ bollyviewr thanks for explaining the clothing items

@ Mister Naidu I would have as well, i still haven't seen Preetam and there's only one low quality video of the 'hum bhi shikari' song on youtube

Thanks for that tip dusted off, they do indeed look colourful

Good ones.. But you left out Vyjayantimala in Madhumati!

I love the fashion! Tribal outfits remind me of Hmong outfits. I can't choose.

@ Nicki it does indeed bear a resemblace to Hmong outfits

@ Arjun Thanks, i'm yet to see Madhumati

Actually, I like this kind of dress.
They both looks amazing... The makeup and hair is awesome !!