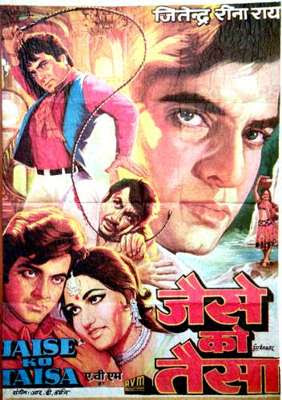 When the title of a film translates into Tit for Tat, you just know there'll be lots of fun to be had, which i did while watching Jaise ko Taisa, this film mixes doppelgängers, great songs, wicked family members & lots of whipping in equal measure for a fun watchable film
Vijay(Jeetendra) a high achiever who's just been awarded medals at college has his joy cut short when is mum is diagnosed with cancer, he's told by the doctor that her illness is treatable for R3000 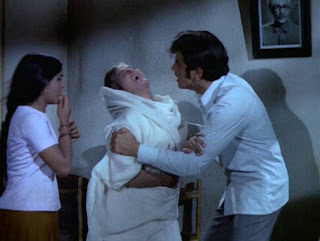 In a desperate bid to cure his mother Vijay breaks into a wealthy mansion in a bid to steal the money needed for his Maa's treatment, while stealing the money he's caught red handed by an exact look alike of himself who lets him have the money 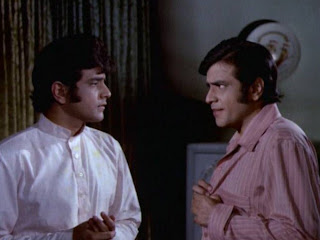 The two form a friendship and are puzzled by the striking resemblance they share, however
Vinod is the subject of abuse by his cousin Pashi (Ramesh Deo) and uncle Shyamlal (Anwar Hussain) who whip him and give him drugs that will make him timid, with the hopes of them inheriting the riches his father left behind for him 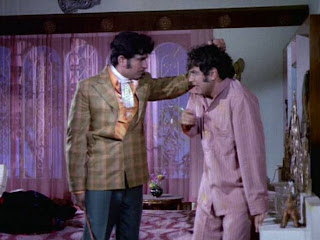 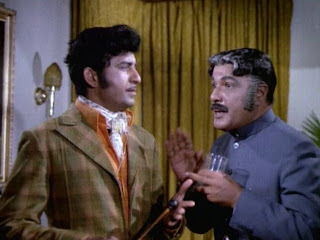 When Vijay learns how Vinod is being ill treated, they swap places and its not long before Vijay now in Vinod's place starts giving Pashi a taste of his own medicine 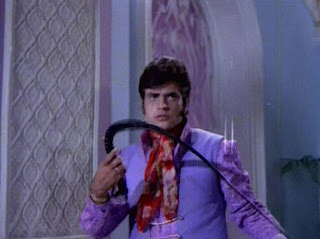 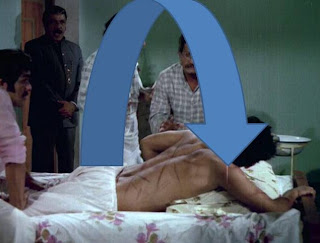 Vinod on the other hand is revelling in the joys of motherly love and enjoying his break from his wicked family members, things take a turn for him when he stars getting haunted by the ghost of his lover Radha who had committed suicide as he had been a coward in accepting he was her lover 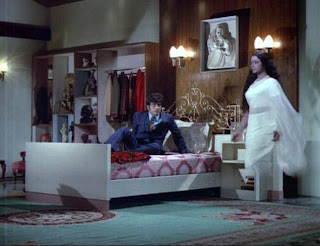 While living in the mansions as Vinod, Vijay meets and falls for feisty village belle Roopa 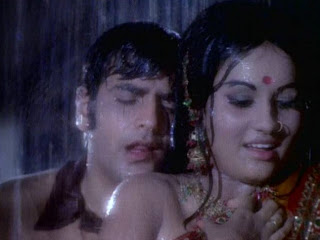 In a strange case of coincidence Roopa happens to be Radha's sister, when her father catches her romancing Vijay he mistakes him for Vinod admonishing Roopa not to see him anymore has he had caused her sister Radha's death, the R word (Revenge) is now on Roopa's mind as she hopes to get justice for her sister but will she realise in time that Vinod & Vijay are different individuals 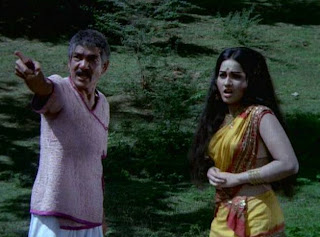 Also how long will Vinod & Vijay go unnoticed for in their respective environments? Will they be sussed out? Is Radha really a ghost or is it all an illusion? Will the secret diary containing all the riches to Vinod's father wealth ever be found?
An enjoyable colourful camp camp extravaganza, is how i'd describe this film, its a must for all Jeetendra lovers, plus the songs are really good too, the story doesn't drag on endlessly & the acting is by all means hammy in a fun way
I loved Reena Roy in this, she had just the right amount of fierceness, this was one of her early films and i totally adored her village belle looks, check out all those colours on her outfit as well as her uber fab beehive 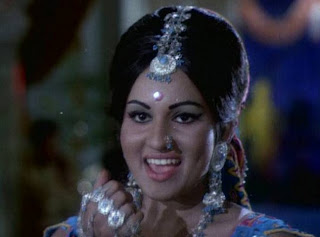 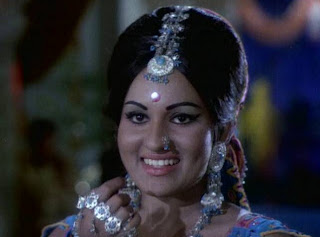 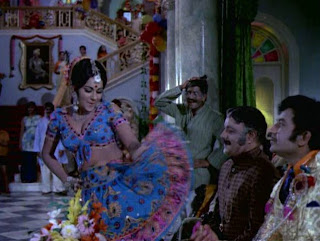 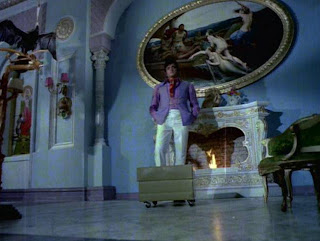 i love the art work in the background 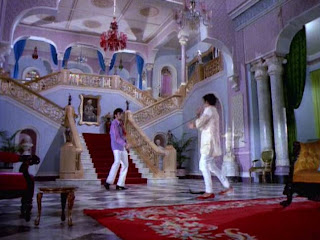 I'm taking a picture of this cake to my bakery, i need a cake like this for my birthday 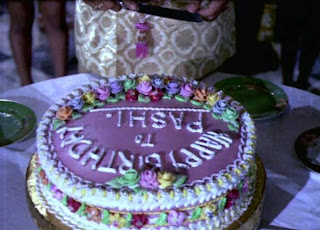 colourful and it definitely looks yummy
the songs by R.D. Burman is another reason why this film is a keeper for me, there's the haunting 'saajan kahan' , a lovely song on motherhood 'Kaun hai', the fun 'chalte chalte' & the colourful & vibrant 'Bhaiya re Bhaiya'. My two favourites are 'Ab ke sawan mein' which is one of my favourite rain songs with sensuous lyrics such as "Pitter Patter rain drops making me wet, has set my passion aflame" not to mention the sexual chemistry between Reena & Jeetendra

and the superb 'Jaise ko taise na mila' never has whipping been so much fun, and Jeetendra sure looks like he's having a blast cracking that whip

Posted by bollywooddeewana at 06:17

This movie is lots of fun. I had seen it as a kid and had totally enjoyed it.

This movie follows in the footsteps of Ram Aur Shyam which itself was made from MGR's Ingu Vittu Pillai (My House Servant). Then we had Seeta Aur Geeta of Hema Malini, and also much later Sridevi's Chalbaz(I hope the names right)!
As I remember it, when JKTAM departs from the formula that's the weakest part of this movie in my opinion. Roopa's revenge for a deflowered Radha and the latters alleged suicide looked too contrived and therefore is less fun.
You rightly pointed out that never has whipping been so much fun and how I love that KK'S song: Jaise Ko Taisa Milaa, Ba.daa Mazaa Aaaya, Maaroon ke chhodoon ke teree taange todoon bataa teri marzi hai kya - Bol. The romantic song, Ab ke Saawan was good too.

This sounds like fun! I hadnt heard of the film, though of course, I have heard Ab ke saawan mein ji jale, and loved it. I'd watch it for the shades of Seeta Aur Geeta, but the whipping song alone makes it a must-see! I dont think I've ever seen one, and both Jeetendra and Kishore Kumar seem to be having a lot of fun doing it.

Oh, this sounds like fun! As bollyviewer and Nasir have already pointed out, with shades of Seeta aur Geeta (and of course Ram aur Shyam), but also I think the Dharmendra-Rekha starrer Ghazab, in which the ghost of simple-villager Dharmendra comes to meet his urban brother to urge him to take revenge.

Am adding this to my list of films to see! Thank you.

@ Sunehri Indeed it is, i enjoyed it so much

@ Nasir Indeed i prefer this to Ram aur Shyam though, and of all the double role films you mentioned Chaalbaaz is my least favourite, i didn't like that film very much, but the songs were good

@ Bollyviewer Indeed the whipping song is worth the price of the dvd, and i myself thught Kishore was having a blast singing it plus Jeetendra makes the picturisation even more awesome

I like all these double role films - esp Ram aur Shyam and Seeta aur Geeta. Try Kuch Khatti Kuch Meethi ;-) I liked Chaalbaaz better than that at least