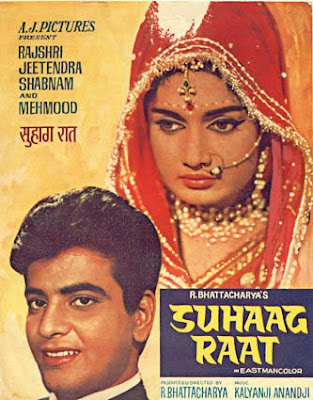 Jeetu (Jeetendra) & Rajjo (Rajshree) are lovers who are getting married, unfortunately for them, their marriage is disrupted when Jeetendra has to report back to his military base following an enemy attack on India. Jeetu leaves promising Rajjo he'll return and get married to her 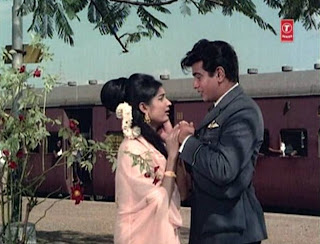 following his departure the entire town is attacked and Rajoo loses all her family members amidst all the chaos, if all that wasn't bad enough she receives news that Jeetendra has been killed in war, a devastated Rajjo alongside her uncle leave town 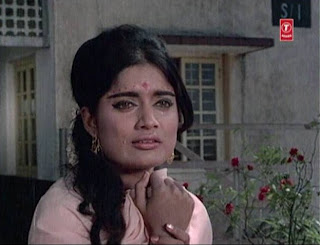 Surprisingly Jeetu returns and soon learns about the death of his family, while wandering in a state of despair he's taken in by Sulochana who takes pity on him and makes him manager of her estate 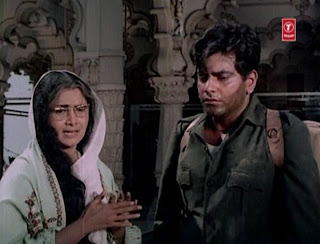 Sulochana however is worried about her own irresponsible son Uday who goes about drinking & being a waste, Jeetu advises her to get him married threatening to disown him or cutting him off her will if he doesn't agree 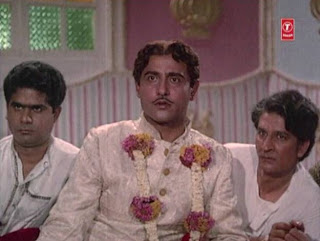 can anyone id the Uday character, he's the one in the middle
Uday agrees to get married, on the day of the wedding when Jeetu goes to pick the bride up from the station, it turns out to be none other than his lover Rajjo, they're both shocked but they both keep knowledge of their past relationship a secret 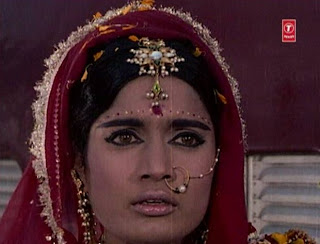 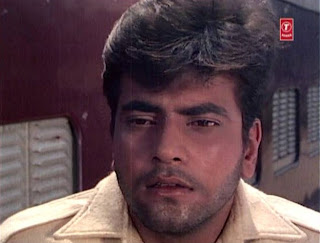 On the same wedding night just before their intimate night together Uday's friends ask him to come drinking with them one last time at the kotha (brothel), after having one drink too many he gets into a fight at the kotha with another Nawab resulting in the Nawabs death 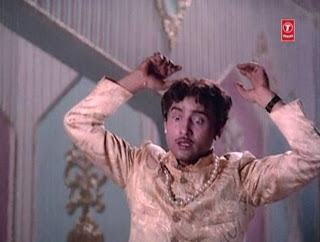 He escapes & Rajjo is declared a widow when a burnt corpse is mistaken for his dead body. He turns up one night much to Rajjo's surprise,he makes her promise not to tell anyone he's alive, which she agress to, they also get intimate with one another 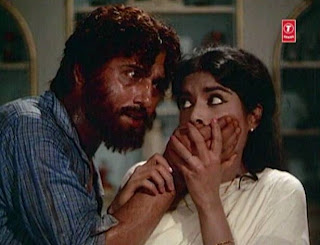 Months later when her pregnancy is revealed, she's reviled & called a sinner who's brought dishonour to the family since Uday hadn't even touched her before his death, Rajjo keeps quiet all through the accusation as Uday had made her promise not to reveal the fact he's still alive 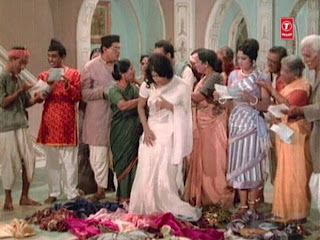 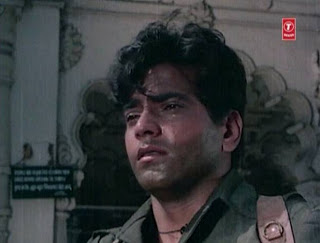 Overall a self sacrifial melodrama which should be watched mostly for the gorgeous songs by Kalyanji Anandji or if you enjoy weepy melodramas that extol the virtues and sufferings of the ideal Indian woman whose husband is her god (this indeed is what the film advocates, even after going through numerous and in some cases unnecessary self sacrifice, Rajjo is given a goddess like status as a reward of her sacrifices) you'll enjoy this, the rest of you know what to do.
The thing with such movies is that despite knowing how its all going to end i can't help but be entertained and be glued to my screen till the very end. Perfomance wise everyone is watchable but this was a different kind of film for Jeetendra as compared to his fun escapist fares like Farz & Waaris, he was way too weepy in this

Rajshree is gorgeous, i love her face 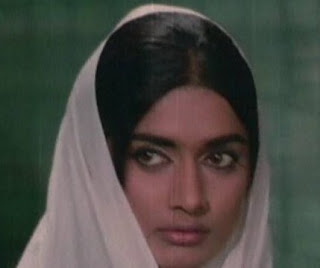 This film also has one of the most hilarious dance offs I've ever seen in bollywood with Laxmi Chhaya dressed as peacock and Madhumati as a snake battling it out, its so camp but ohh so enjoyable
What i enjoyed the most as i've said are the songs by Kalyanji Anandji there's the bouncy Lata number 'Mohi lagi re' the fun 'mere dil se dil ko' my two favourites though are the lovely 'Khush raho' by Mukesh
and the super hot mujra 'Main Qayamat' with the lovely Madhumati & a very feisty Laxmi Chhaya
Paisa Vasool Rating: 4/10
Posted by bollywooddeewana at 16:19

I haven't seen this one...but since I have seen so many other melodramas that extol the virtues and sufferings of the ideal Indian woman whose husband is her god I'm happily going to skip this one. And thanks for the review. Songs are entertaining - Watching Laxmi Chhaya and Madhumati's dance.

Thanks for this Jeetendra week, he doesn't get enough credit for being such a good dancer and actor! I really loved him in Caravan and his awful 80's films but looks like i need to see this one because that madddd dance off!

Haven't seen this one either, and probably won't see it - weepiness and mindless self-sacrifice is something I won't willingly let myself in for while watching movies!

BTW: Love that new masthead on your blog! Which movie is that screen cap from, with Jeetendra in a dark blond wig and dressed like a medieval jester? It looks fantastic!

@ Sunehriyaadein Curiosity as well as the love i have for the movie poster, is what led me to this film, had i seen a review of it, i'd have avoided buying it but still the songs and that danceoff make it all worth it somehow

@ Rum You're welcome, everyone seems to have loved him in Caravan, and as silly as his 80's flicks were i actually love them as they had some of the most wicked tunes. Watch out for two next week

@ dustedoff Same down here, the songs and that dance off between Laxmi & Madhumati is a reason i shall be holding on to the dvd. Thanks for the kind compliments,the Jeetendra in a dark blonde still is from the 1974 film Bidaai which i shall be reviewing next

Goodness... this sounds like it should have a "Paisa Vasool Rating" of avoid yaar!

Thank you for telling me about Bidaai! Will be looking forward to your review.

@ bollyviewer you're right but i actually forgave it because of the songs, i loved them so much but it definitely falls into avoid yaar category