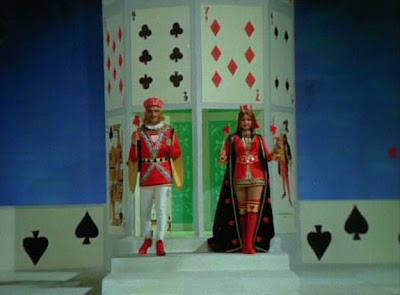 First of all a round of applause to the costume designer of this film, never have i seen anyone pull off a Jack and Queen of Hearts outfit, it's so well made and a lot of attention has been paid to detail. Secondly apologies for my quick end to my 7 day Jeetendra Extravaganza i was dragged by my friends for a weekend in Manchester, I'm back home now so i shall i continue blogging properly
Prabhakar (Satyendra Kapoor) leaves his struggling family behind in the village to relocate to the city, left behind are his mother Parvati (Durga Khote) his younger brother Sudhakar and his sister Gauri 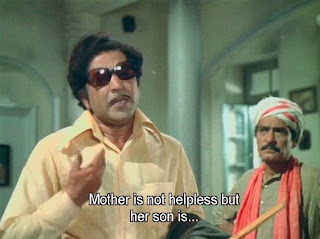 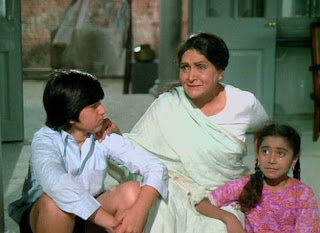 years later when his family are being hounded by Mangal for rent, a grown up Sudhakar (Jeetendra) moves to the city where he takes up a job as a cab driver to make ends meet 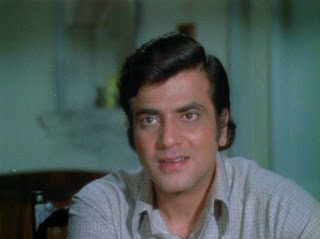 While working as a cab driver he meets a wealthy girl Padma (Leena Chandavarkar) and the two fall in love, they get married and they move back to the village to live with Sudhakar's mother 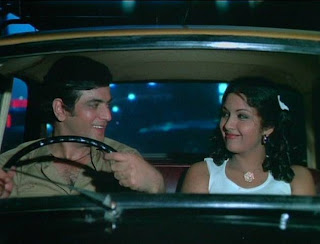 Rich Padma however finds life in the village very hard to bear and demands they move back to the city, she also becomes jealous of the immense attention Sudhakar pays to his mother and nags him endlesssly 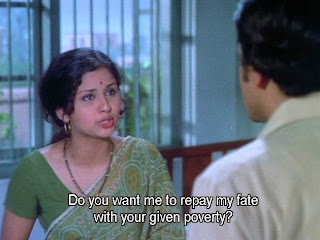 Parvati eventually decides Sudhakar move back to the city much to his dislike, he agrees reluctantly, not wanting to disobey her 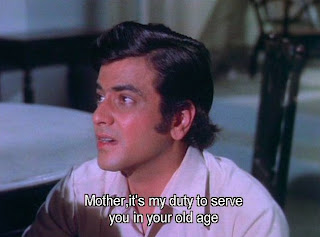 Upon getting to the city he sets out to teach Parvati a lesson on the importance of a mother's greatness following the birth of their baby. I've captured the hilarious dialogues that ensue between Padma & Sudhakar in the screencaps below 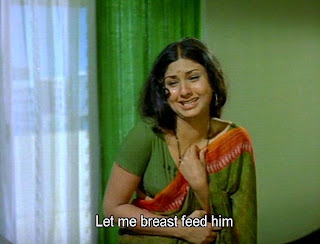 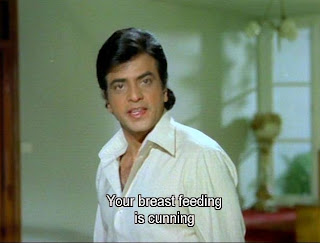 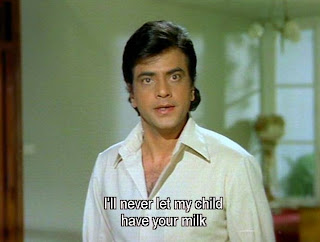 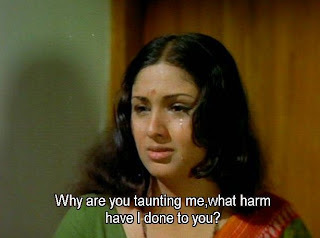 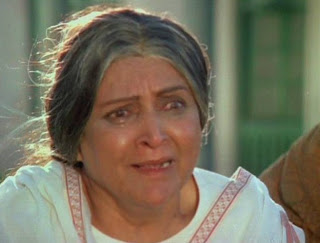 Bidaai also earned Durga Khote her only Filmfare award as the Best Supporting Actress for her performance as Parvati, which i would describe as the self sacrificial; all suffering mother
Jeetendra was fun to watch, hearing him deliver the breastfeeding dialogues had me cackling, and of course i have nothing but pyar (love) for Leena, she is undeniably cute, any recommendations on what films to look out for her in 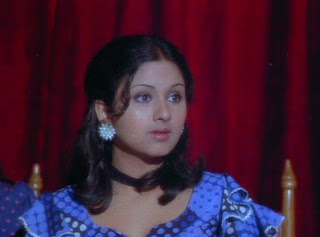 And great work from the costume designer,none other but the great Bhanu Athaiya, i have never seen anyone pull off the Queen of hearts and Jack outfit as much as they did 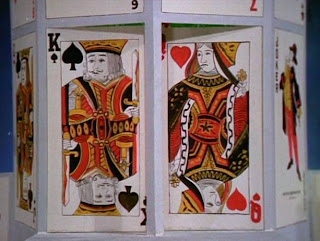 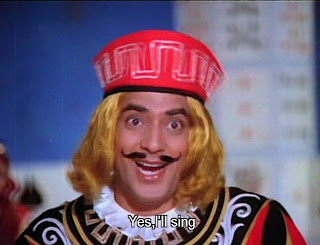 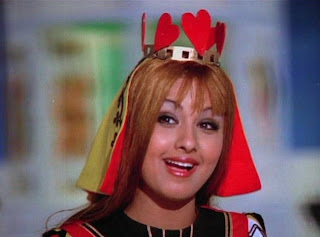 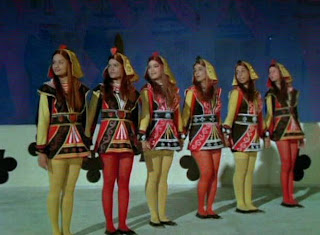 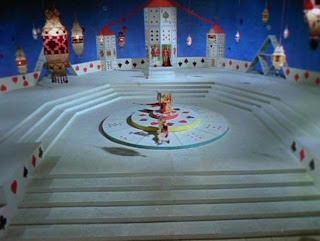 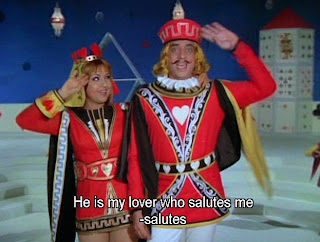 Good music from Laxmikant Pyarelal, my favourites are the fun 'mera sasura bada paisewala' 'maine tum sang' & the superb 'Dekho dekhoji' picturised on a giant card sets with Jeetendra and Leena in the King of spades and Queen of hearts outfit
Paisa Vasool Rating: 5/10 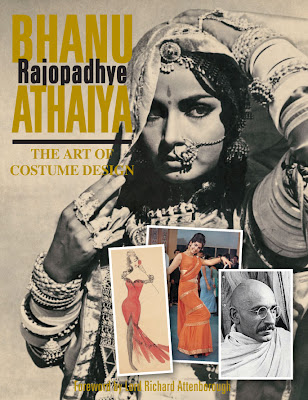 If you're into fashion or costume designing, I'd recommend Bhanu Athaiya's The Art of Costume Design book, based on her experiences as a costume designer for numerous bollywood films like Teesri Manzil, Reshma aur Shera, Sahib Bibi aur Ghulam amongst others, unfortuantely it seems to be only available in India though (why is this?) its definitely worth collecting
Read the book review here
Order the book from India if you can here, but i think i'll wait for a friend who's going to India to get mine for me
Posted by bollywooddeewana at 18:51

Story sounds okay but costumes are really worth a praise!I would give Durga Khote a lifetime achievement award for self sacrificial; all suffering mother!
Those dialogues are really hilarious!!! Jeetu is looking cute, esp in the Jack outfit.
Leena is very cute. I haven't seen many movies of hers - but had loved her in Humjoli, Manchali and Mehboob Ki Mehendi. Leena I had heard in some interview that people in the sets used to call her gudiya (doll)

I must have seen this movie but don't remember much. I get mixed up about this movie. Tell me, which movie had the song that went something like.....Mummy badi nikammi... khele rammi...

Durga Khote should have also won the awards for Mughal-e-Azam where she is torn between the love of her son Salim and her duty as a brave Rajput wife to the Mughal emperor, Akbar.

Regarding Leena's movie, I second the ones mentioned by Sunheriyaadein with an addition of Main Sunder Hoon though this one is out an out a Mehmood's movie. But I remember Leena's dialogue: I Like Your Innocence" which brings a revolution of sort in the life of a simple waiter Sunder.

Somehow that breastfeeding bit and the self-sacrificing mother element puts me off this film. On the other hand, the music is good, and I rather liked the Jeetendra-Leena Chandavarkar jodi from Humjoli, so just may add this to my must-watch list.

To all the other recommendations, I'll add one of my own: Anhonee, opposite Sanjeev Kumar. It's a suspense thriller, and good.

The cards song is fabulous - outfits, song, sets, the whole works! But I am not sure I want to see a woman tortured by not being allowed to breast-feed her baby - I'll probably burst from laughing too much!!! :-)

And Durga Khote got a FilmFare for this?!! Thats so unfair to the poor woman. She was one of the big leading ladies of the 30s and 40s and a superb actress with several great roles to her credit, too. And her footnote in history is a weepy Maa character in a melodramatic family drama?!

First of all, I love your blog title image. I know nothing of Jeetendra so it's a great little visual introduction.

Second: "So will Sudhakar allow Padma to breastfeed their baby? Will she learn the importance of motherhood?" Sounds like a great tv serial cliffhanger promo! I can just hear the voiceover now. ;)

And Third: Wow... a book on Indian popular fashion design only? I didn't know such a thing existed! I've only read traditional clothing books like "The Sari" by Mukulika Banerjee. This one looks amazing- too bad it's apparently not widely available :(

@ Sunehri She does indeed look like a doll, i'll look out for Manchali and Mehboob ki Mehndi

@ Thanks Nasir i'll look out for main Sunder Hoon too, i have no idea of the song according to the google search, it was revealed to be from Santaan (1976)

@ Dustedoff Thanks a lot for that recommendation i'd heard of it before butits still only available on vcd at Induna and seems there's no dvd of it anywhere, it joins the long list of movies i'm hoping will be put out soon

@ bollyviewer you got it spot on, i myself was thinking the same thing, of all the films she's done, it had to be this, ahh well, i have a love/hate affair with award shows, they always seem partial

@ Minai Thanks, Indeed i always add cliffhangers at the end of my plot synopsis, glad you found it funny

I myself had no idea about the book,its so awesome there's one out there as I've long loved the costumes and fashion in bollywood, sucks that its only available in India at the moment perhaps it would become available here soon, I've checked e-bay & Amazon with no real luck

Durga Khote was such an amazing woman. The filmfare award was really beneath her.

I heart Leena too. She was in many flicks. I think she looked really lovely in Mehboob Ki Mehendi.

I tried to embed, but couldnt .. so please click on the link

@ Avdi i agree, i was really surprised to learn she earned an award for this film of all the great work she's ever done. Thanks for the link, i'm indeed familiar with that song, i just have to watch the film now, she's simply stunning

Thanks for dealing with Nasir's query Ramesh :0)

Jeetendra was fun to watch, hearing him deliver the breastfeeding dialogues had me cackling, and of course i have nothing but pyar (love) for Leena, she is undeniably cute, any recommendations on what films to look out for her in mens gold chains germany , mens gold chains usa