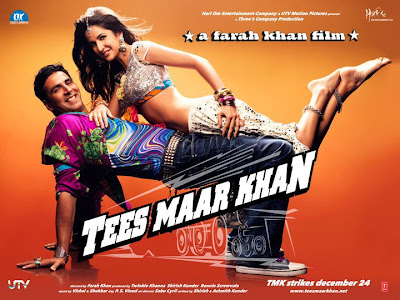 Posted by bollywooddeewana at 11:45

hey you spotted that one well!

I saw the trailer when I went to see Golmaal 3. It sure looked fab! This one and No Problem too.

I 'm an admirer of Farah khan's style of direction and creativity. I deeply think that Akshi is more suitable for this role than Shahrukh .. although I'm a SRK big big big fanatic..!!

Now I'm looking forward this Eid to the new Sanjay Leela 's masterpiece Guzaarish with my complete reservations towards Hirthik and Aish..

NO!
I'm not looking forward to this film. I liked all Farah Khan's films till now, but The main character's key line put me off completely!

Haha! That's a hilarious juxtaposition, although we all know that Akki/Kat cannot hold a candle, much less a match to Jeetu/Sri! I like Farah's movies so far but am just NOT a fan of Akki/Kat, so I won't be in any rush to see this one. But seeing that image made me want to re-watch Tohfa! :-)

Am I just being a ridiculous prude when I say I'm somewhat surprised they used a pose that can so easily seem so sexual? I'm trying to think of other ads that show so much groin contact :)

@ Naveen I don't play with my hindi films :)

@ Avdi I'm avoiding no Problem, i think i'll wait for it on dvd

@ Harvey I have some doubts too, but i trust Farah for her Paisa vasoolness, hence i'm sure it'll be entertaining

@ Ahh do give Tohfa a watch ,the songs are fab but the melodrama is way too HEAVY

@ kal na ho you're welcome and i do agree with you, Akshay seems more suitable to this role than SRK and i do enjoy Farah's films too, they're always value for money, i didn't make it to the cinemas to see Guzaarish but i'll definitely catch up on dvd

@ Amodini Indeed apologies about my late response, Star now are much more fitter but i surely didn't mind the tubby stars back then.

@ Limette Apologies about my late response I know it sucks when stuff like that happens but no worries, movies often get released to dvd on a faster rate than before, Induna.com is a great place to look for the latest releases plus their prices are very decent

I am impressed with the content of the article. I have been trying this method and I have seen some real improvements. This method is very useful.

Yeah I can see it, I just watched Rajneeti, unlikable characters with a decent plot line, Katrina and Ranbir bring the movie down a notch,the both of them really just can not act and I cringed several times at Katrina Kaif attempts. I don't think she is ready do do such serious movies, had they taken a actress who could actually act might have made her character more respectful and taken more seriously.

I like her overall and sure the hype around her is the only thing working for her.

Once that has gone people will want good acting skills and if she hasn't sharpened up by then she could be in serious trouble.

As for Tees Maar khan I am not even going to bother, from what I have heard it's another let down, the one thing that stands out from that movie is that song that all the guys are perving over to be honest.Just my opinion.